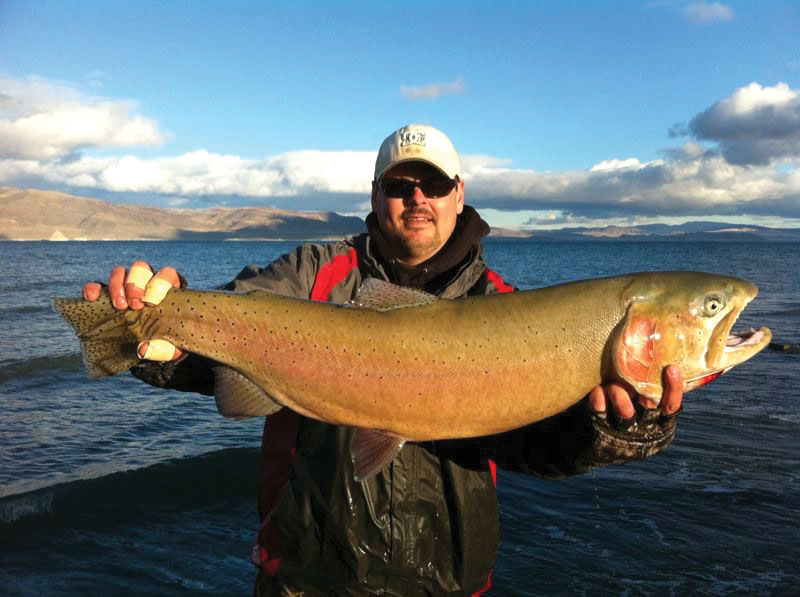 Last winter, Matt Ceccarelli was fishing at the shores of Pyramid Lake, like he had since childhood, when his line caught on something.

“At first I thought it was a snag,” he said. “Some of the other 10- to 15-pound fish fight way more than this one did. This fish came to me. I think it just came right up from the deeps that day; right place, right time.”

Weighing almost 20 pounds, that fish belonged to the original strain of Lahontan cutthroat trout that had died off in Tahoe by the 1940s. For the first time in 70 years, an angler hooked one in Pyramid Lake.  Its presence there was nothing short of a miracle, some say.

A relic of the Pleistocene era, the giant trout’s name derives from the lake that once covered much of what we now know to be Reno. Lahontan, one of the largest lakes in North America, shrank over the millennia due to a warming climate. Pyramid Lake, a high-alkaline body of water east of Reno and Lahontan’s largest remnant, played a key role in the lives of the Paiute Indians for thousands of years.

At the turn of the 20th century, the healthy Lahontan cutthroat trout population supported commercial fishing operations. Dubbed the “salmon trout” by explorer John C. Fremont, the fish gained a reputation for its succulent pink meat, and Tahoe’s lakes and rivers fed a demand stretching to the San Francisco Bay and beyond.

The arrival of European settlers in the mid-1800s set in motion a chain of events that stressed the ecosystem of Pyramid and other natural lakes, including Tahoe. Within a few decades, logging took a toll on natural waterways. Loggers dumped wood pulp and other pollutants into rivers and streams to the extent that, on some days, the water became too thick for even fish to swim through.

But the demand for water to irrigate dry Nevada ranchland—leading to the 1905 construction of the Derby Dam on the Truckee River east of Reno—became the Lahontan cutthroat’s death-knell.

This ancient monster of a fish can survive freezing temperatures like those found in and around Lake Tahoe. It can thrive in high-alkaline waters that choke other species. It can live 20 years and grow as heavy as 40 pounds. But it cannot reproduce without swimming upstream to spawn, and the dam became the concrete obstacle thousands of years of evolution could not conquer. This historic photo (believed to have been taken in the late 19th century), offers a perspective
on the size of the giant Lahontan cutthroat trout biologists have successfully re-introduced into
Pyramid Lake. The fish was renowned as a delicacy and subsequently fished to near-extinction,
photo courtesy of Jim Bell and Velma Comstock Eden collection

By the 1940s, except the native populations that still exist today in Independence Lake, near Truckee, and Summit Lake, in northwestern Nevada, the species died out. The Pyramid strain, driven to extinction in the lake that shares its name, would have never returned if not for the foresight of some unknown benefactor who carried it east and planted it in the fishless streams of the Pilot Peak Mountains on the Nevada-Utah border.

In the 1970s, noted fish biologist Robert Behnke was summoned to identify a trout species discovered in the Utah mountains that could not possibly have been native. In papers published at the end of that decade, his conclusion that the trout was the original Lahontan strain faced great skepticism. No one could explain how the fish ended up far outside the Great Basin.

The issue remained unresolved until the mid-1990s, when a biology professor at the University of Nevada, Reno, hatched an idea. Mary Peacock wondered if new developments in DNA testing would allow her to compare small genetic samples of Lahontan trout—taken from museums like the Smithsonian—with samples taken from the Pilot Peak trout.

Preservation in formaldehyde made such comparisons impossible in previous decades, but advances in genetics allowed scientists to work with smaller and smaller bits of DNA, Peacock says. With these developments, she says, “museums have become this treasure trove across the globe.”

Armed in later years with samples from the Smithsonian, the California Academy of Sciences and the University of Michigan, Professor Peacock set out to test Behnke’s theory. And to the surprise of many, he was correct. The Pilot Peak fish genetically matched the Lahontan variety.

This ancient lake-dwelling trout had eluded our best efforts to eradicate it from the face of the earth, but the next step—bringing it home again to its natural habitat—was not so easy. The first step was to overcome critics fearing the new strain might not represent the original Pyramid Lake trout that grew so large. For a while, breeding of this strain was a small-time operation confined to a garage outside a hatchery near Reno. But the fingerlings began feeding on other fish early in confinement and quickly grew. Within a year, they were moved to the main pools of the hatchery, where biologists hoped selective breeding of this strain would offer the genetic advantage the fish needed to repopulate their ancestral waterways. The critics were indeed surprised when this strain grew fast and very large when planted into Pyramid Lake. It looks like the giant trout of old may be back.

“Amazingly, they are growing to be these monsters,” said Peacock. “These are trophy fish, and you should see the smiles of the anglers who catch them.”

For proof, look no further than Ceccarelli, who made history with last year’s catch: the first of the tagged hatchery fish caught in Pyramid Lake. Crosby Lodge, the historic fisherman’s hangout at Pyramid, was so thrilled with the catch that owner Fred Crosby had it mounted and hung on the wall of the bar for all to see.

Paradoxically, limited fishing helps preserve the species. People who might not necessarily think about the preservation of ecosystems can identify and care deeply about this fish, which, says Peacock, is “something to behold.” As a professor and a researcher with the curiosity to push DNA testing to its limits, she has an eye on the future.

Above Tahoe, in Fallen Leaf Lake and the streams that feed it, the evolutionary dance continues. Last fall, a UNR graduate student observed a pair of Lahontan cutthroat trout spawning in the tributaries to the lake, a feat that Peacock greeted with all the excitement of a mother with her newborn.

“When you’ve worked with a species as long as I have, you really start to root for the fish,” she said. “You’re like, ‘C’mon buddy!’ And we’ve gotten this fish to stick!”

If the miracle at Pyramid Lake is any predictor of things to come, fishermen might one day see the “salmon trout” back in cold, clear waters of Tahoe.