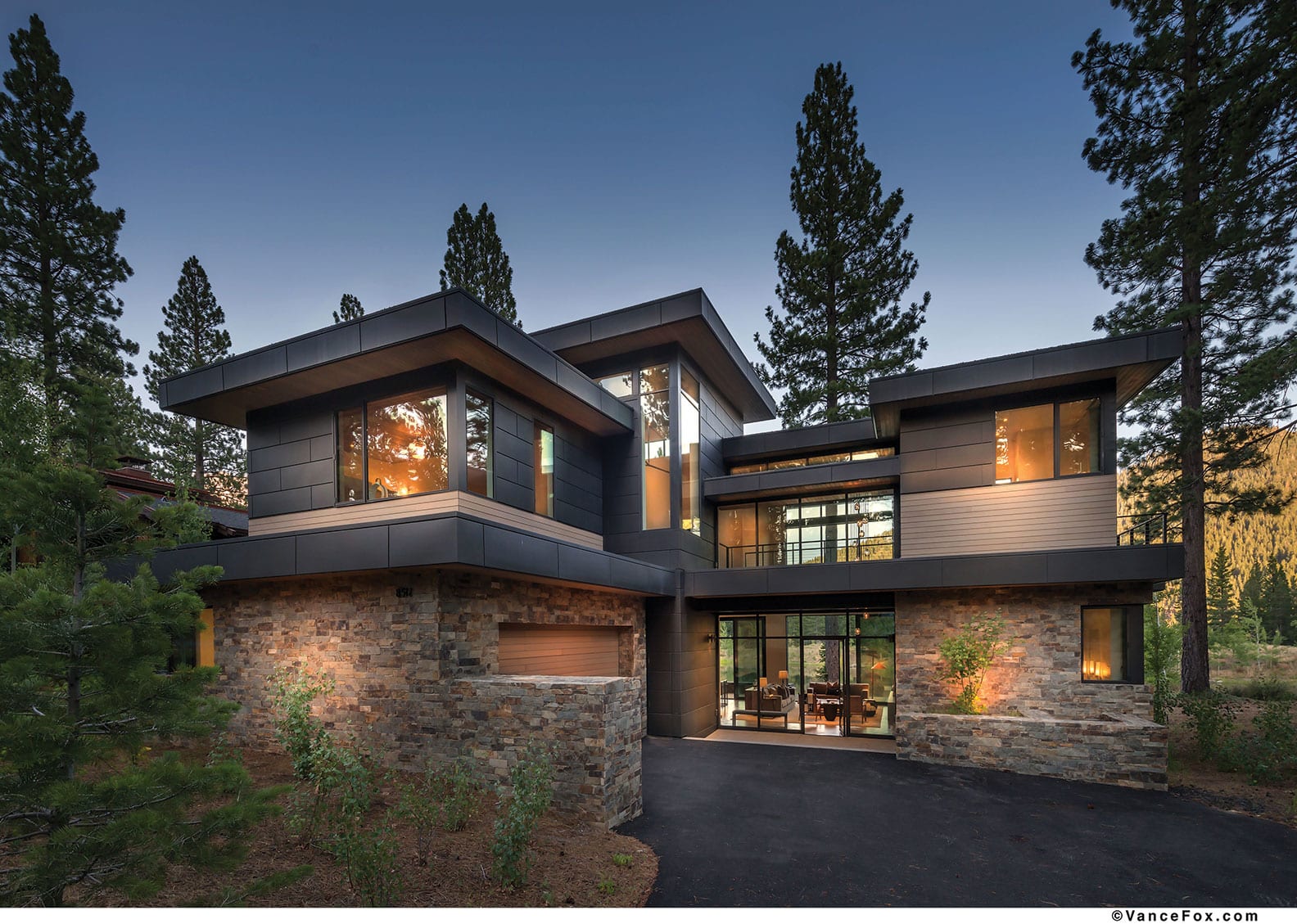 Exterior materials used on the home include a mix of clear western red cedar, ledgestone, ANTHRA-ZINC and ample amounts of glass, photo by Vance Fox

In the field of custom home building, builders must be nimble, ever ready to adjust on the fly. There’s no telling when the design may veer from its original course. Such was the case for a Mark Tanner Construction crew of late, when a Martis Camp project changed architects mid-build.

“We were working on the second floor when the transition happened, so the whole upper floor had to be removed and then sat for a period of time until the redesign happened,” says Stephen Reitter, the project’s interior finish and field supervisor with Tanner’s Truckee-based firm.

The turnover and revised design stalled construction for about six months, yet resulted in a stunning modern home.

“It’s a home that the client loves,” Tanner says. “He has mentioned to us multiple times that he feels very comfortable and at home here, and he enjoyed the process thoroughly.”

“Nothing too drastic needed to change, but [the owner] gave us license to make moves where we thought it was worthwhile,” says Marmol Radziner Senior Associate Brad Williams. “We simplified the architecture and gave the finishes a cleaner aesthetic.”

The new design called for more glass and metal, multiple flat roofs and a generally modernized interior, with clean lines and bright white walls mixing with an assortment of more rugged materials brought in from the exterior. The great room is highlighted by a two-story-tall fireplace surround, as well as a bridge that gaps the voluminous space, photo by Vance Fox

Williams reworked the residence so it essentially has two “fronts,” he says. One is on the approach from the driveway, and the other on the opposite side, engaging the aspen-rimmed and trout-stocked lake through lift-and-slide Arcadia doors from Truckee’s Red Horse Fenestration. Walls of steel and glass on both ends allow views through the vaulted great room. The voluminous space is highlighted by a two-story-tall fireplace surround to the right of the entry, with a TV and shelves neatly recessed into the ledgestone masonry.

A dining table and hanging light fixture by Kalmar Werkstaetten split the space between the living room and kitchen. A glass door near the table leads out to a covered lakeside patio and barbecue area. Underfoot throughout the lower floor, a smooth, cream-colored Italian concrete overlay installed by Evolution Industries complements the white walls, while contrasting against lines of black steel and dark walnut cabinetry. “The floor surface is kind of unique; it was one of the first times this product was used on that scale,” Reitter says.

The second floor is accessed by a tiered staircase with an offset steel stringer and floating treads of fumed white oak. White oak flooring is also used throughout the main upstairs spaces, which include a bunk room in addition to master and guest suites. Both suites boast lakeside decks topped with a Thermory ash material that Tanner lauds.

“We used Thermory ash for all the wood decking on the outside, which has a concealed fastener system and the ash has no knots; it’s very tight and it does not warp on an overbuilt deck application,” Tanner says. “It’s a great product that we exclusively use on all of our homes.”

A bridge that gaps the space over the great room stands out as the eye-catching feature of the second floor. Reitter says the connector—lined with custom tube-steel rails—was part of the original design, but it was up against the windows and didn’t necessarily come off as a bridge element.

“It was Marmol Radziner that pulled it away from the windows and made it more like a bridge,” he says, adding that a custom John Pomp Studios light fixture, featuring 25 hand-blown glass globes cascading down from the two-story ceiling, engages the newly created void immediately inside the entry. A bridge lined with custom tube-steel rails stretches across the great room, photo by Vance Fox

At the owners’ request, Marmol Radziner interior designer Eric Wilcox introduced selective touches of New England style with the furnishings—a kind of “Nantucket heritage reinterpreted in a way that works with the mountain setting,” Wilcox says, pointing to the striped textiles and throw pillows intended to reference a subtle nautical theme.

About the time Marmol Radziner joined the team in November 2014, the neighboring lot went up for sale. The owner jumped at the opportunity, purchasing the lot and commissioning the design of a small guesthouse—or pool house, rather—that would match the materials of the primary residence.

Like the 3,248-square-foot main home, the pool house, at just over 1,000 square feet, is clad in clear western red cedar interspersed with panels of charcoal-black zinc, ledgestone by Reno’s Eric Schwedt Stone & Masonry, and ample amounts of glass. The materials repeat throughout the interiors of both structures, which are connected by a lighted pathway of ledgestone pavers. The main home and pool house are connected by a lighted pathway of ledgestone pavers, photo by Vance Fox

The pool house owes its moniker to a 14-person Diamond Spa with a motorized cover. The spa is set into a concrete deck located outside the giant wall of glazing, which peels away with Arcadia lift-and-slide doors, opening the entire space toward Concert Lake and Northstar’s Lookout Mountain beyond.

A stout ledgestone fireplace surround with an inset TV bookends one side of the deck just outside the glass; the other side is closed in by a cedar-sided cube that houses a restroom and mechanical room, as well as a cleverly notched-in barbecue. A large metal shed roof appears to hover above the building, and extends beyond to provide cover for the deck.

“That giant roof is floating above glass. It’s a neat look,” says Reitter. At just over 1,000 square feet, the pool house, which includes a 14-person Diamond Spa, was designed to capture the essence of the main home through repeating materials, photo by Vance Fox

The pool house, which comfortably fits a kitchen, plush L-shaped couch and separate seating area within its spacious single room—and includes a Murphy bed built into the wall—is perhaps Williams’ favorite part of the project.

“I like how simple we were able to keep the design. It’s one roof over a little box with some support spaces and a stone wall, and that’s really the basics of it,” Williams says. “We wanted to capture the essence of the main house, and open up the space to engage with the landscape as much as possible.”

With the spa and outdoor living aspects, the landscaping was crucial to the flow between the main residence and pool house.

Through Radziner’s landscape department, the gradually downsloping lots were planted with native vegetation, much of which was harvested on-site by Native Plant Farms and grown in the company’s Washoe County facility until the team was ready for transplants.  Other vegetation such as ryes and grasses were grown from seed and then used as green roof systems on portions of the pool house.

“The whole landscape perspective was basically reusing or growth from scratch,” says Robbie Jamison, who served as project manager for Tanner’s team. “So probably 75 to 80 percent of all the plant life was natively grown down in Nevada, which took about a year to get to its expected growth potential for planting.” The main home and pool house glow from across Concert Lake, photo by Vance Fox

It wasn’t the only part of the project that took time.

All told—given the six-month delay and late addition of the pool house—the project stretched from August 2014 to January 2017. Williams says jumping into the mix mid-build presented its challenges, but working with Tanner’s experienced crew helped smooth the transition.

“They were great. I really liked working with Tanner’s team,” Williams says. “At first, they had to be really open to look at the modifications that we were proposing and consider them and say, ‘Look, this is a big change’ or ‘Yeah, sure, that’s no problem.’”

In the end, it was no problem for Tanner’s crew, who make their living adapting on the fly.