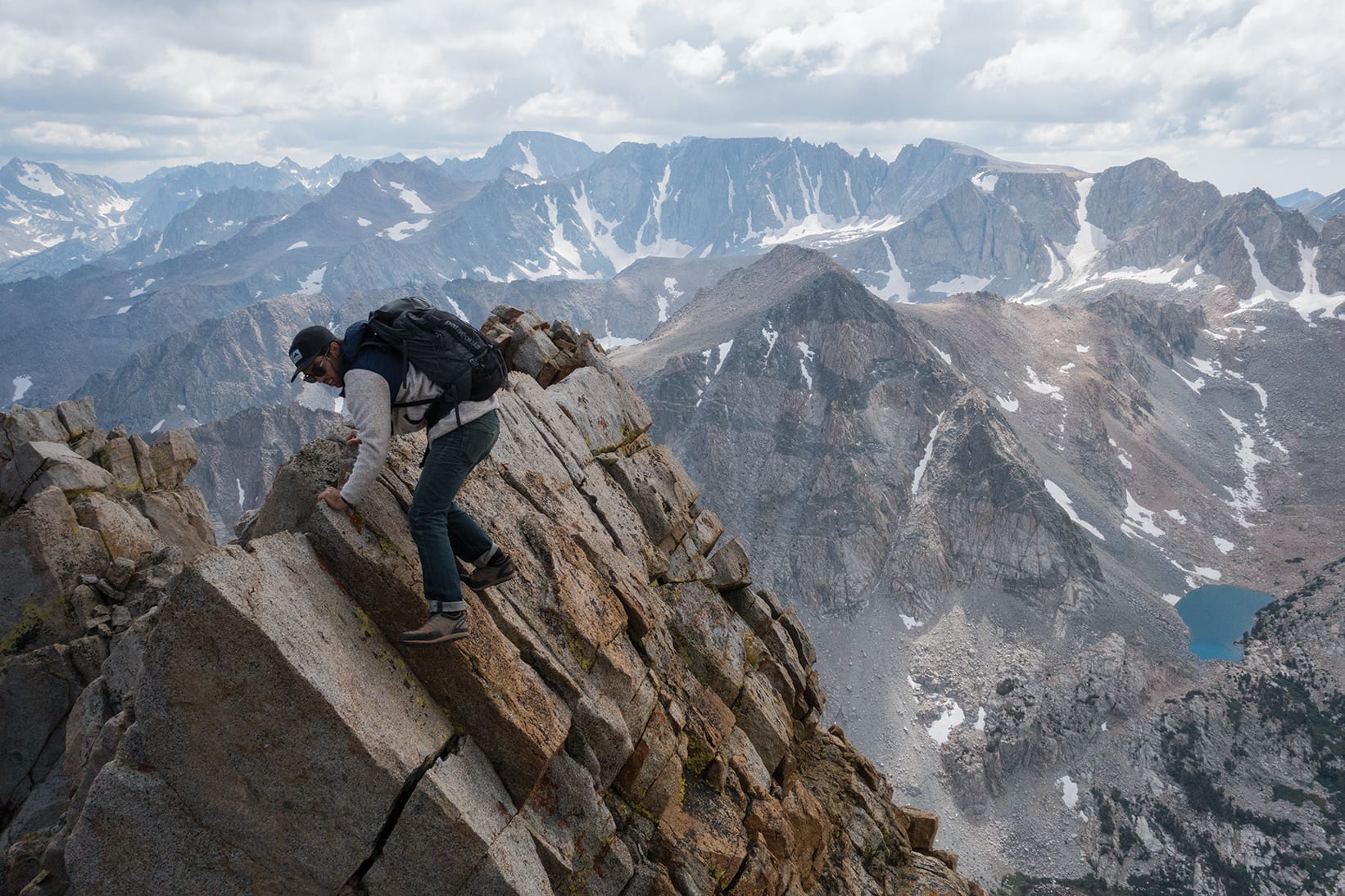 Was somebody up there chomping on some Big League Chew? It looked like the earth and all its atmosphere had been sucked inside a massive bubble gum bubble. The sky and clouds in every direction glowed a rich, nearly fluorescent pink. Hard-earned stoke on the summit of Mount Carl Heller

Gazing off at a sea of jagged summits soaked in such spectacular light was a fitting finale for the sun on this gorgeous September evening. My wife Allison and I had enjoyed every second of the sunshine that day. Starting well before dawn, we had spent the day hiking and rock climbing in the High Sierra. The sunset marked about 15 hours on the move for us.

Two hours before the sun went down, we had completed an alpine rock climb that topped out on the summit of a 13,211-foot peak near Mount Whitney named Mount Carl Heller. Now a couple hours into an involved descent back to the trailhead, we caught the stunning sunset from the top of Vacation Pass at 12,600 feet. Despite the epic light show, the sunset was a tad bittersweet knowing we had another 8 miles of technical cross-country travel between us and our truck parked in the Owens Valley.

Thank goodness we had fresh batteries in the headlamps. The 6,000-foot descent into the George Creek drainage would end up taking us another six hours. We stumbled back to the truck just before 2 a.m.

While the adventure took longer than expected, we were thrilled with what we had accomplished that day. At long last we had climbed Mount Carl Heller’s East Arete, one of the classic alpine ridge climbs in the Sierra. Rising up like a granite knife blade from a basin of small lakes, the East Arete is revered for its superb rock quality, wild exposure and thrilling yet moderate climbing difficulty. If such a climbing route were located in Yosemite, there would be a conga line of climbers ascending the East Arete every sunny summer day. As it sits, however, deep in the Whitney Range, guarded by a grueling approach and even longer descent, Mount Carl Heller is only climbed a handful of times a year.

Allison and I were drawn to climb Mount Carl Heller by a photo I found online the previous winter. The long, narrow ridge looked absolutely spectacular, and though steep in spots, the route was supposedly not that technically difficult. The party that first climbed the East Arete in 1966 pegged the difficulty rating at the infamous “4th class.”

Just like judging art or defining beauty, describing the difficulty of a mountain climb is a subjective pursuit. How hard it is to climb a mountain depends on the person’s experience, skill and tolerance for exposure. The Sierra Club was the first organization in the United States to create a climbing classification system to help eliminate some of the subjectivity. In the 1930s, the club devised a system that categorized climbs into six classes—“1st class” being the easiest and “6th class” the hardest. While these difficulty ratings have evolved, the foundation of the classification system is still in use today.

The Sierra Club’s original system defined a 1st class route as a trail that does not require the use of hands for balance. A 2nd class route was defined as a cross-country route or rocky slope that requires occasional use of the hands for balance. The 3rd class marked the start of moderately steep terrain that requires the use of your hands to hang onto the rock and pull yourself upward.

The 4th class was defined by steep terrain with small but available handholds and significant exposure. A fall on 4th class terrain would likely be fatal. The 5th class defined a technical climbing route that requires skilled use of small holds to ascend and the use of a rope to safely protect the climber. An unprotected fall on 5th-class terrain would surely be fatal. And the 6th class was defined by terrain so steep and with so few holds that you need to attach climbing gear to the rock and pull on the equipment to ascend. The 6th class is now known as aid climbing. Allison tops out on Mount Carl Heller above Wallace Lake

Responding to the growth of rock climbing and the development of increasingly harder climbs, the Sierra Club improved the rating system in 1952 by subdividing the 5th class into what is now known as the Yosemite Decimal System (YDS). The YDS classifies 5th class climbs from 5.0 to 5.15 (5.15 being the most difficult) and further subdivides the harder grades with an A to D rating starting with 5.10 (5.10a, 5.10b, etc.).

While the Sierra Club system established a useful overall classification system, the gray area between 4th class and 5th class has also been an endless source of confusion. Prior to the widespread usage of the YDS, only the hardest climbs were designated as 5th class. If a climb was steep, but the hand and footholds were somewhat plentiful, the climb was rated 4th class even if the route was horribly exposed or dangerously loose.

Many of the Sierra’s first climbing pioneers, men like Norman Clyde and Joseph Leconte, focused on finding improbable lines up major peaks that turned out to be relatively easy objectives. Clyde alone claimed over 100 first ascents in the Sierra, most of which are still rated as 4th class.

When staring up at big rock face, or even a ridge with multiple sides, the reality of finding the moderate 4th class route can be much harder than expected, however. A route rating also assumes that you are climbing the same route as the pioneering climber who established the route and set the rating. If you get off route, all bets are off. All it takes is one wrong turn and a 4th class climb can become a much more committing 5th class ordeal.

The secret to embracing the challenge of variable difficulty on 4th class routes is to always bring a rope. If the climbing feels secure, you might not use the rope, but if faced with a tricky or dangerous obstacle, you have the option to belay your team through the difficult climbing section. Oftentimes, using a simul-climbing rope system that allows you to move continuously without resetting the rope is the fastest strategy. Still five hours from the trailhead, Allison starts the down climb from the summit of Mount Haeckel

This is the system Allison and I used on the East Arete. We climbed with about 40 feet of rope and at least two pieces of climbing protection gear between us at all times. As we moved up the ridge, the lead climber placed the protection and the second climber removed it. By always keeping two pieces of protective gear between us, we were protected in the case of an unexpected fall, but we moved much faster than if we had been using a traditional lead climbing belay system.

Mount Carl Heller was one of a few epic High Sierra alpine routes we climbed last summer. Three of the other memorable routes were the Northwest Arete on Mount Haeckel, the East Ridge of Mount Russell and the Southeast face of Mount Emerson.

What set these climbs and the East Arete apart from other routes we’ve done was a combination of exposure and rock quality. All four of these routes climb up narrow ridges compromised of solid granite blocks and slabs. When you’re scrambling up a ridge with a 1,000-foot drop on either side, the last thing you want to encounter is loose rock. Climbing through long stretches of loose rock is terrifying and extremely dangerous, as it can be hard to tell if a handhold or foothold will support your weight. And regardless of whether a route feels solid, it’s important to pull test any hold you’re about to trust before you commit to the move. Broken holds have killed a few of the best Sierra climbers of every generation.

The mysterious nature of the difficulty rating, matched with the assumption that a moderate route does exist, is what makes 4th class alpine routes so attractive to the motivated peak bagger. With solid route-finding skills and efficient climbing techniques, you can also move fast through 4th class terrain, which expands the potential for what’s possible in a single day.

For the curious and prepared explorer, climbing classic 4th class routes is an amazing way to spend a sunny day in the High Sierra. The long approaches and descents from the routes can be grueling, but the suffering comes with the territory. The most satisfying days in the mountains are always hard earned.

Seth Lightcap is a Squaw Valley-based writer, photographer and avid explorer of Sierra rock, snow and trail. See more of his stories at www.sethlightcap.com