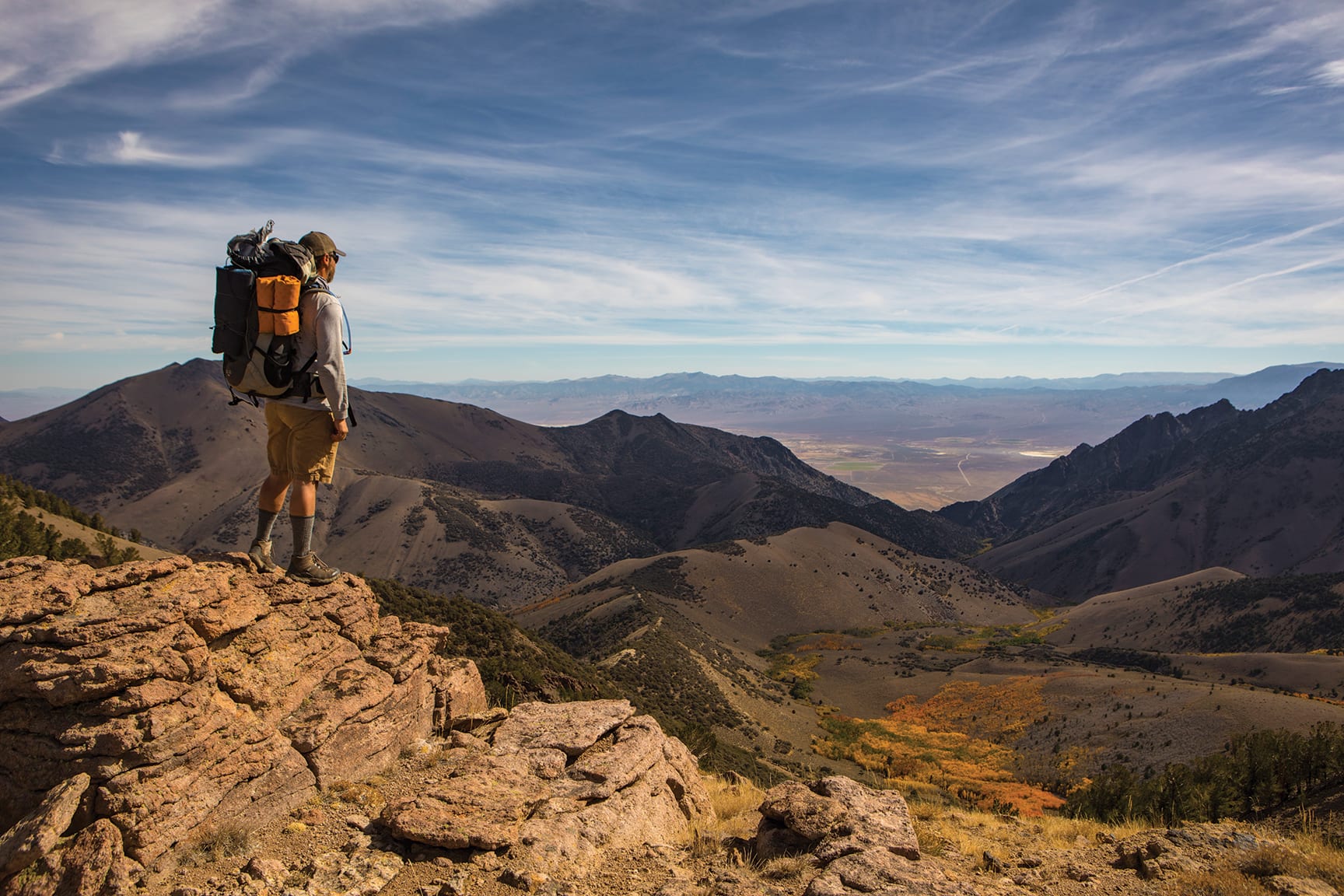 02 Dec Traversing the Toiyabes on a Faint Footpath Sunset over the Shoshone Range from the Toiyabes

I sometimes envision the highways and off-beaten paths that crisscross Nevada’s vast landscape as contrails intersecting in the sky. They are expansive, multi-dimensional, and lead to endless and sometimes unchartered corners of a map.

Many of these roads were built with dreams of finding silver or gold. But my exploration of the great state of Nevada has little to do with mineral pursuits and everything to do with mining the grid for hidden locations, lonesome highways and forgotten foot paths, past herds of antelope, wild horses and the occasional big cat.

As my most recent journey began, the initial sight of the Toiyabe Range legitimately intimidated me as I pushed my truck down the emptiness of Highway 376. My travel partner, Dave Smoyer, a true Nevada wilderness connoisseur, was motoring in front of me to set our car shuttle. I kept glancing at the imposing swath of tooth-like ridgeline, biting my lip as I gnawed at uncertainty.

“Maybe we should hike this in two sections,” I thought.

Our goal was to hike the entire 72-mile Toiyabe Crest National Recreation Trail, which stretches along the spine of the range from the mining settlement of Kingston southward through Arc Dome Wilderness in the remote center of the state. The longest continuous trail in Nevada, it was built in the 1930s with horses and hikers in mind and has seen little use over the years.

We left my truck at the southern endpoint and repacked our gear for the mission. That’s when Dave turned to me and said, “We’re not gonna die, are we?” Some backpacking trips are about solitude and serenity. These trips usually come with preconceived mental images of lush fields of wildflowers and mountain lakes. As I searched for those images of tranquility, they were quickly replaced by the realization that we were heading into the high desert and that meant two things—a marathon of walking and a quest for water.

Unlike a springtime hike when water is abundant, we were venturing into the range in October when many of the seasonal streams were dry. As a result, I contacted cartographer Jake Kastner of the Friends of Nevada Wilderness. He was working on a map of the region and had information on reliable water sources.

We left late at night and slept off Highway 50. Things were shaky from the start, with a broken cell phone and a lack of sleep setting the tone.

It took all the next day to complete the car shuttle and a burly four-wheel drive up the east side of Ophir Summit, where we stashed half our gear at 10,200 feet. That put us looking for the trailhead in Kingston at 4:30 p.m. Dave hadn’t backpacked in years. His gear didn’t fit into his pack and he had to use an extra one that belonged to my wife. He wears a large. She wears a small. After searching for the trail for 30 minutes, we decided to just start walking. There were no signs, just a dull footpath on the slope.

As the sun dipped behind the Toiyabes, we began an arduous initial climb from 7,500 feet up to the 10,000-foot crest. I was moving smoothly. But looking back, I could see Dave in discomfort. He was constantly shifting the undersized backpack while laboring to breathe. The shoulder straps were too small for his body and were eating into his skin. On top of that, his feet blistered within a mile of our start. He talked about turning around. Despite our common goal to hike under the light of the full moon that night, we stopped an hour after the moon rose and set up camp on the ridge.

With morale low and wind blasting us head on, we went to sleep without eating. Simply stated, I was eager to close the chapter on day one of this trip and begin fresh in the morning. One of many colorful aspen groves in the Toiyabe Range

On day two Dave was still on the fence about continuing his journey. While I hoped he would keep hiking, I was prepared to walk alone if need be.

As I awoke before dawn I was reminded of two things—the unmistakable repetition of dogs barking during the night, and a light way out on the ridgeline in a sea of darkness. I cleared out my dry and crusted eyes and took in the sunrise, which was eclipsed by a knoblike mountain to our east. Dave and I packed our gear while a steady stream of shorn sheep scampered down the ridge. A silhouette of a sheepherder hovered next to a canvas tent.

The trail led us past his camp. I noticed him 100 meters down the ridge and decided to say hello. As I got closer I was greeted by four adorable sheepdogs and a Mexican sheepherder named Felix, who kindly shared with me in Spanish the location of some nearby springs. He had spent the previous four months in the Toiyabes, walking in the mountains and grazing the flock.

Arriving back at the trail, I was relieved to discover that Dave had decided to stick it out. We walked down a steep slope to one of the tiniest springs I have ever drawn water from. Purification took a while so we decided to cook the previous night’s dinner in a drainage that was peaking with autumn foliage. The juxtaposition of stark Nevada desert with a Sprite-like spattering of yellow and green aspens cleared my mind from any negative thoughts and put me in the mind space I set out to find.

As the day progressed we crossed valleys and ascended rolling mountains until reaching an aspen grove where we made camp. Quality campsites like this were surprisingly few and far between on the trail, which provided only a couple of flat-ish exposed ridgelines as viable sleeping spots. A high-elevation perch along the Toiyabe Crest

The next day began with high morale as the aspens electrified our souls with oranges and reds.

The trail took an interesting turn as it veered from its route on the western slope of the range, leading us away from the crest for the first time. Then, it petered out onto a steep embankment. We had lost our way. As we scrambled around the brush I could see a partial trail 200 meters below and I decided to have a look without my pack. I was lost in a moment of mild panic when I spotted two backpackers walking up the hill through the sagebrush.

Sure enough it was Jake Kastner, the cartographer, who was out completing his map of the region. He pointed us in the right direction and informed us of our location at Tierney Creek. He must’ve noticed the look of shock on my face. Tierney was where we thought we had camped the night before. We were 12 miles behind schedule.

It’s hard to say if a cow pelvis on a wooden pole is a good or bad omen. But from the minute we left Jake—and came upon this rather odd sign—we ran into a series of confusing moments.

Before we knew it we were sidetracked again in a thicket of aspens. We had walked right past the actual turnoff, which was hidden to the eye. The sun and shadows play a major role on this relic of a trail. If they are in your favor, you can make out the traverse lines. If there’s no contrast, the trail gets lost in the brush.

For the rest of the day, every time we got into a rhythm the trail dead-ended into sagebrush. We counted six times in six hours that we had to stop and retrace our steps. Fortunately, the occasional sighting of boot prints helped keep us on track.

We had planned to reach our food and gear cache on Ophir Summit, which included a 5-gallon jug of water, two Gatorades, fresh boxer shorts and socks, by the end of our third full day. We arrived a day behind schedule. As the winds picked up and the sun sank behind the Shoshone Range to our west, we stepped for the first time into the Arc Dome Wilderness Area. We walked in the shade of South Toiyabe Peak (10,895 feet) for the next mile until reaching a gorgeous pass where we set up camp. From our high perch, we watched the sunset, moonrise and subsequent sunrise.

Despite the beauty, every step I had taken over the last three days was agonizing. I had plump blisters on both feet and gnarly torn blisters on both heels. Every morning I taped them, but after an hour the tape was gone and the burn continued. Once starting this journey, there is really no turning back.

We followed deer, mountain lion and bobcat tracks for days on end and wondered where they headed. For decades this trail has made their lives easier than bushwhacking through the endless brush—like nature’s superhighway across the spine of Nevada.

We walked our final few days through the wilderness past the conical Arc Dome Peak (11,780 feet) and an immense riparian zone, where we were greeted face-to-face by a badger, which came within 5 feet as it waddled up a sandy slope.

Dave had transformed into a full-fledged walking machine and our discussions moved on to future Nevada missions. We had finally found our groove.

As one day blended into another, we became more familiar with our surroundings, our bodies and our movements until, in a moment of reminiscence, we looked up to see my truck at the mouth of the canyon. The trail had led us full circle.