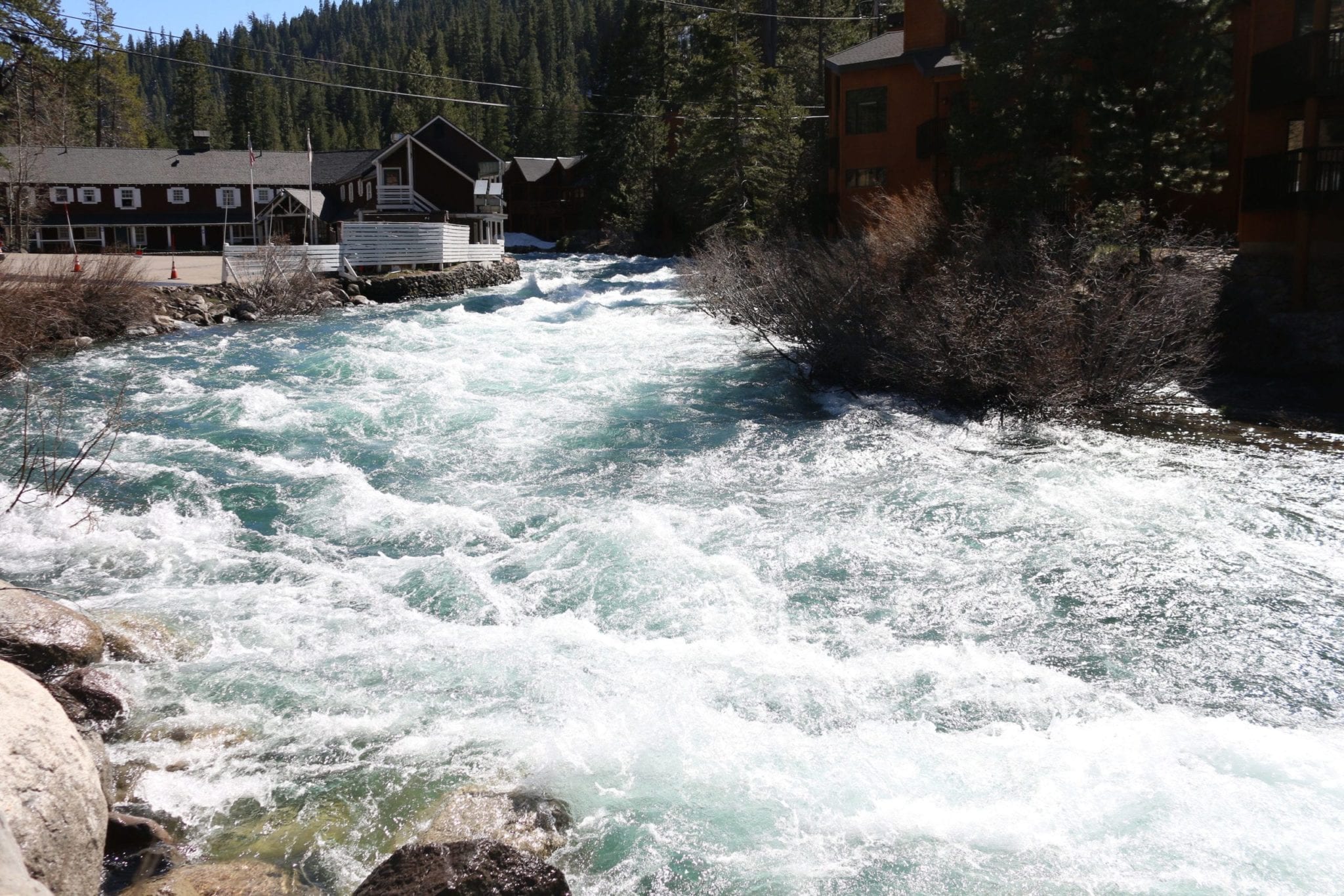 The Truckee River rages past River Ranch between Tahoe City and Truckee on May 2, photo by Sylas Wright

in Around Town | Environment | Outdoors | Summer 2017 | Written by Tim Hauserman

The Truckee River is a place of refuge for rafting, fishing and contemplation. It’s also a ribbon of life supplying the water needs of downstream users from Tahoe City to Reno and the source for Pyramid Lake, the river’s terminus.

But the river is bound by the wild fluctuations of weather experienced in the Sierra Nevada. There are years of drought when little or no water makes its way out of Lake Tahoe, and then there are exceptional winters like the one Tahoe residents just survived, when the rain and snow come down so fast and furiously that the river becomes a raging torrent. 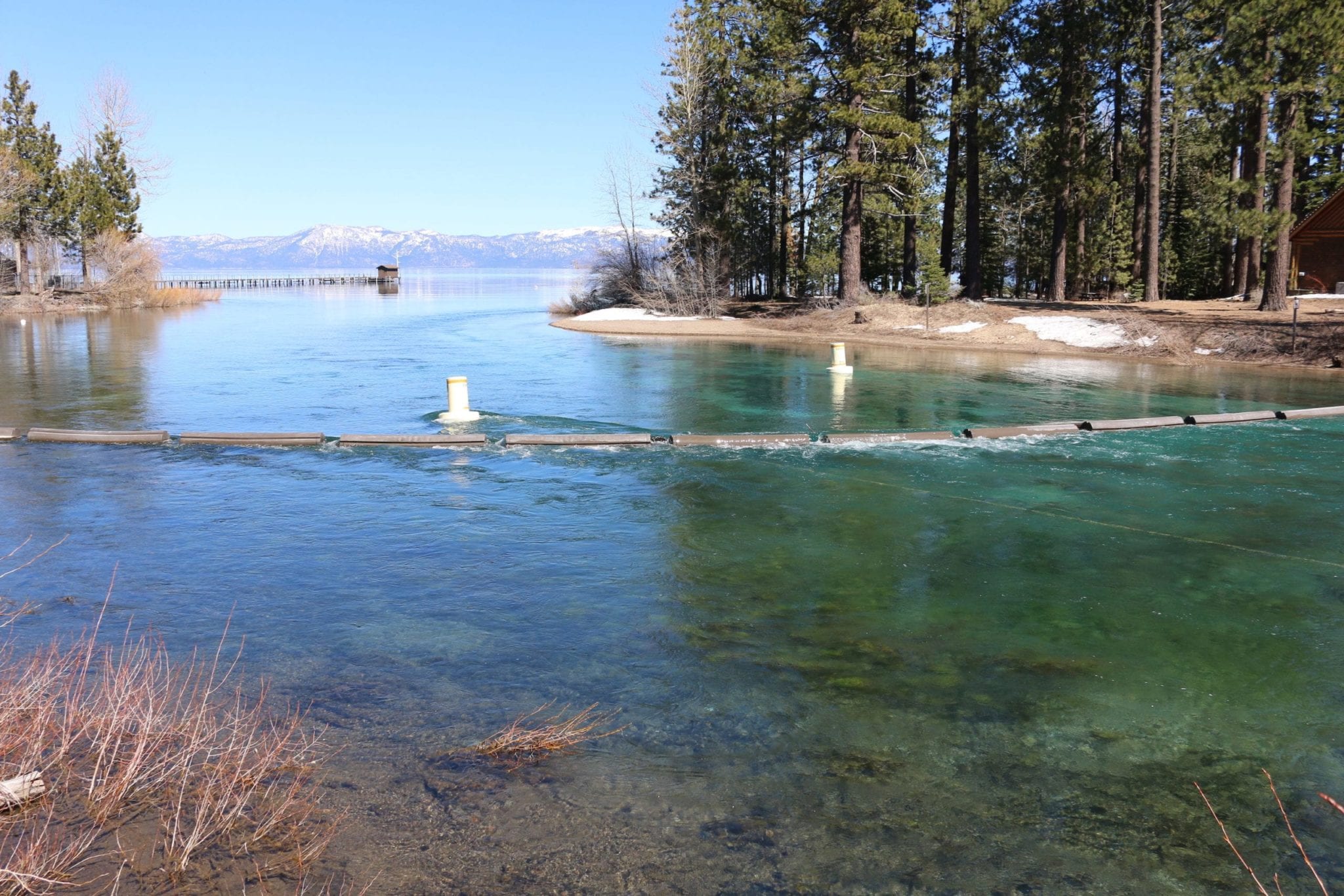 Lake Tahoe rose from below its natural rim last fall to more than 5 feet over the rim by spring, photo by Sylas Wright

Behind the Truckee River Dam in Tahoe City is a chart of Tahoe’s lake level over the last 100 years. It looks like the heartbeat of a runner taking on a steep challenge, with wide variations year to year in the amount of water flowing into The Lake, and thus the Truckee River.

A review of this chart makes it clear that the job of regulating how much water to release into the Truckee River is not an easy one. Releasing too much increases the impact of the next drought on The Lake; releasing too little poses the risk of having to unload massive quantities of water in a short time to prevent The Lake from surpassing its legal limit. 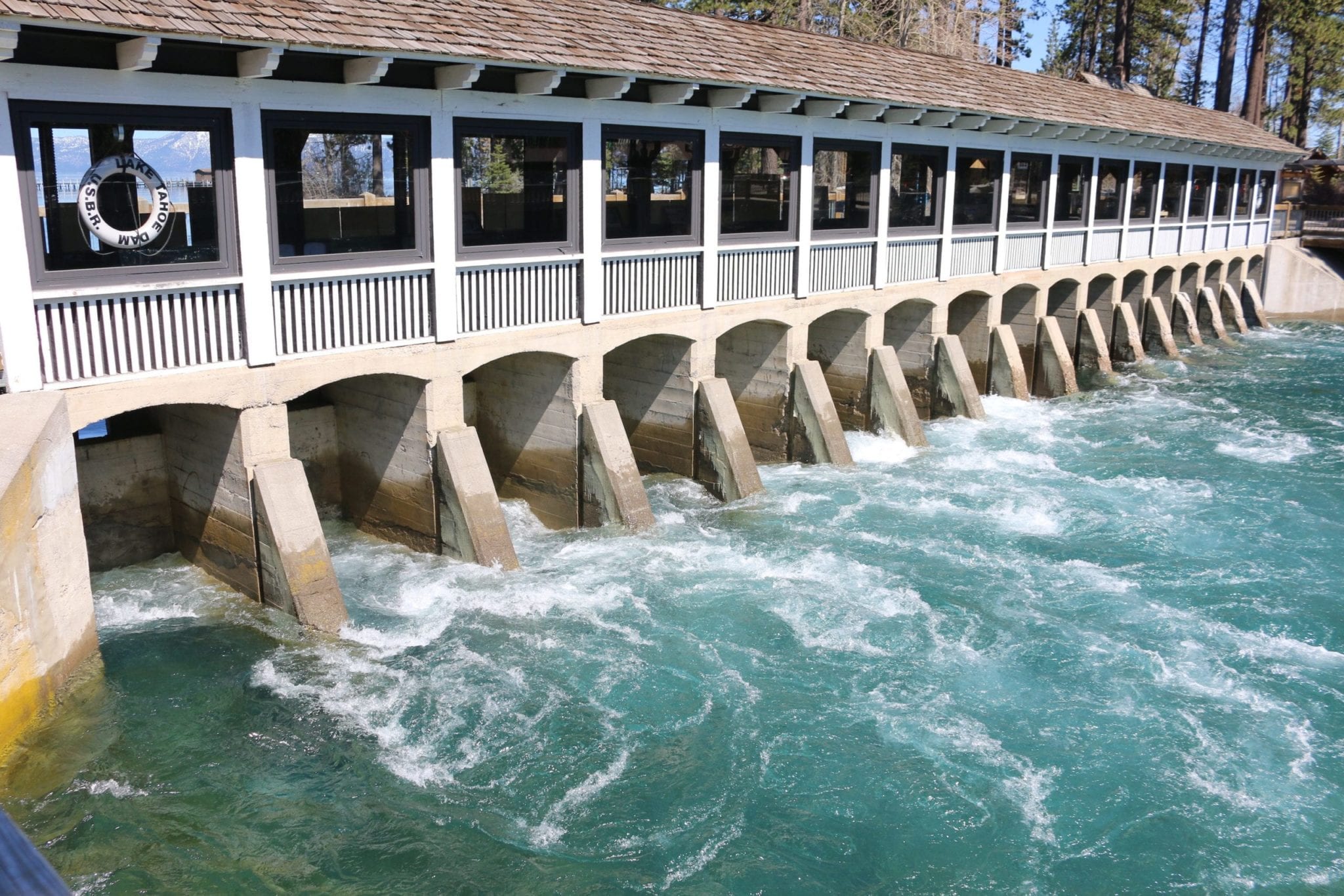 Water is released from the Lake Tahoe Dam in Tahoe City in May, photo by Sylas Wright

Over the last 12 months, the Truckee River has run from 18 cubic feet per second (cfs)—barely a trickle—to over 2,000 cfs in late April, which was enough to leave portions of the bike trail between Tahoe City and Squaw Valley under water. At that point a number of home and business owners were anxiously chewing their fingernails, hoping the water didn’t get any higher.

Throughout the spring, the river level stayed high, often 1,600 cfs or more for days on end. For an idea of how much water that is, the rafting operations in Tahoe City like to see flows from 200 to 400 cfs for their customers floating to River Ranch. 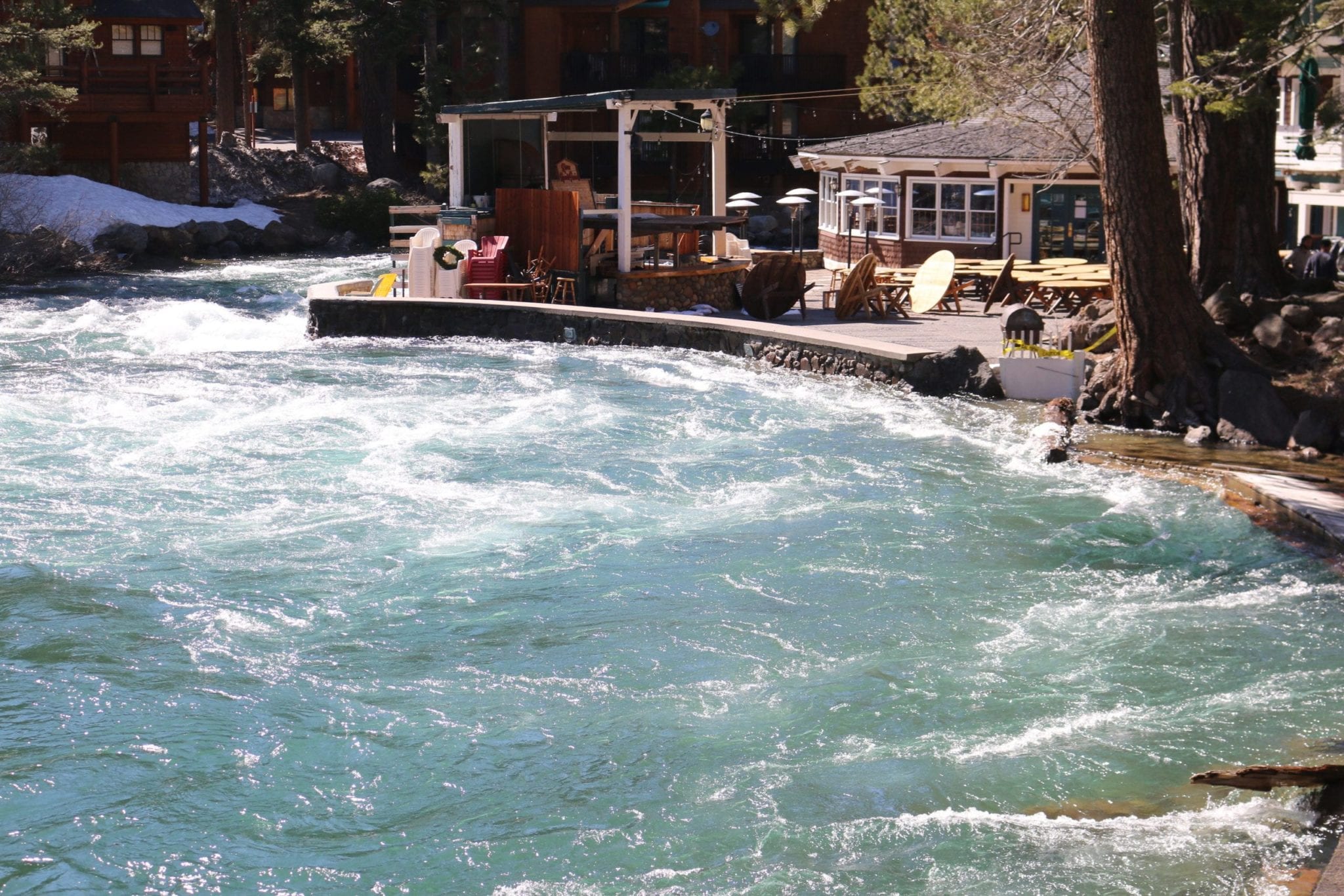 The Truckee River was only a couple feet from spilling onto the River Ranch patio in early May, photo by Sylas Wright

When and how much water to release from The Lake is regulated by the federal water master in Reno, Chad Blanchard. His decisions on raising and lowering Tahoe, as well as the other reservoirs in the Truckee River system, are regulated by a complicated series of rules that are encapsulated in the Truckee River Operating Agreement. The agreement sets Blanchard’s perimeters on a number of factors affecting all the users, from lakefront homeowners on Tahoe to farmers in Nevada to the Washoe Tribe members who control Pyramid Lake.

The level of Tahoe has risen from below its natural rim last fall to more than 5 feet over the rim as a result of the area’s prodigious winter.

“In April, we saw the largest inflow into Tahoe in 118 years—a foot rise,” says Blanchard.

Tahoe not only received record levels of precipitation this year, but much of it came in the form of torrential rain during several atmospheric river events, increasing The Lake’s level much sooner than normal. In early May, with multiple feet of snow still at higher elevations, Tahoe’s lake level gauge sat at 6,227.7 feet. The maximum legal limit of Lake Tahoe is 6,229.1 feet. It was then that Blanchard sent instructions to longtime Truckee River gatekeeper John Sutter to begin releasing water at a rapid rate.

“There are only three reasons to release water from The Lake into the Truckee River,” says Blanchard. “The first is to keep a minimum of 50 cfs running out of The Lake. The second is to maintain the Floriston Rate, a requirement that at least 350 cfs in the winter and 400 in the summer pass the town of Floriston. And the third is to prevent The Lake from reaching its upper limit.”

After a few days at 2,000 cfs in early May, Blanchard slowly lowered the outflow to 1,700 cfs, and then down to just under 1,300. At that rate, while certain spots on the bike trail remained under water, most of the trail was dry and usable again. While this was good news for cyclists, it didn’t solve this year’s water dilemma: Could enough water be released to keep Tahoe from overtopping its maximum without causing flooding downstream?

In addition to Tahoe, water is released into the Truckee River from Donner Lake as well as Prosser, Boca, Stampede and Martis Creek reservoirs, most of which also filled up rapidly this spring. There are also a number of creeks that feed directly into the river. In other words, the Truckee River water system is complicated. 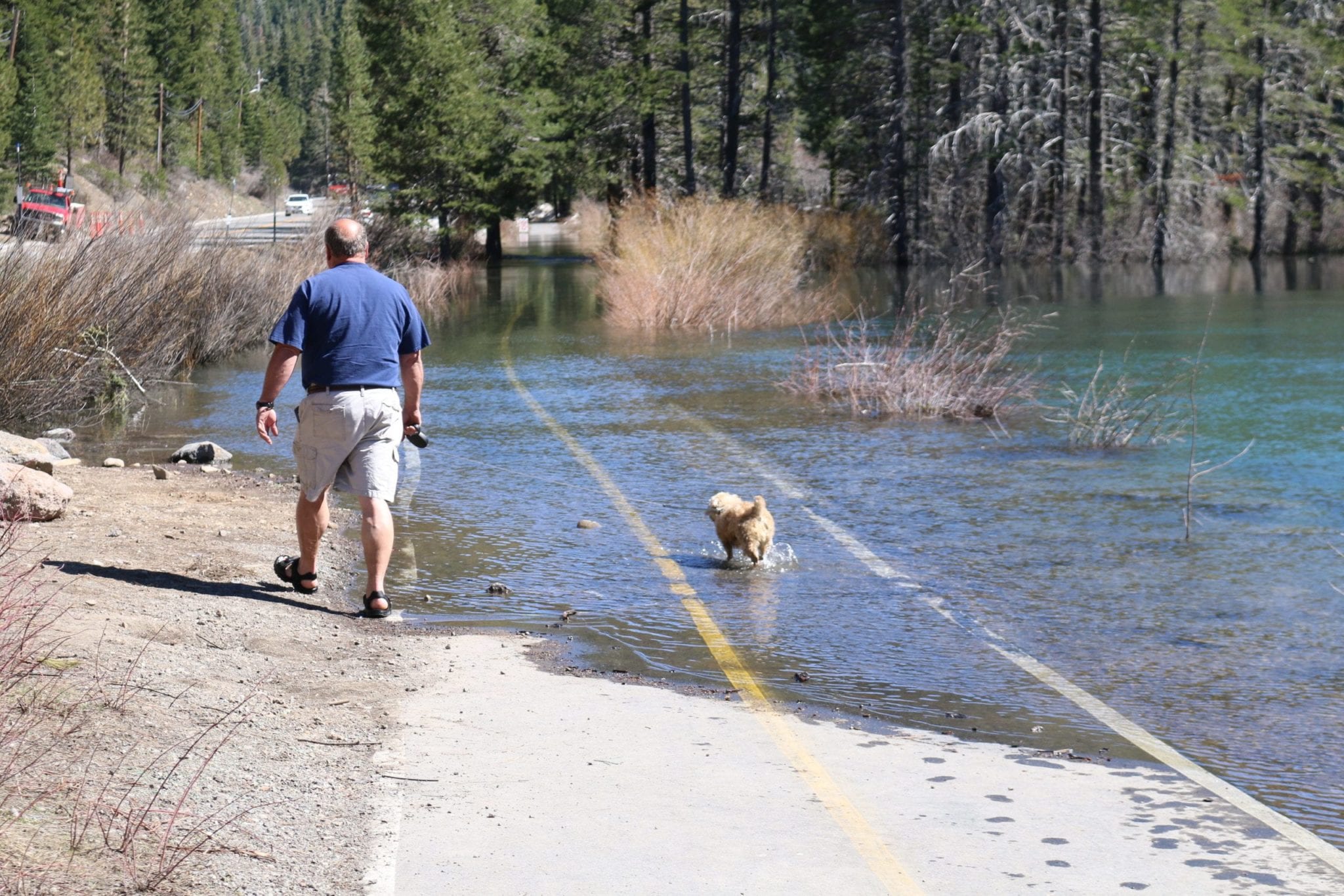 The high volume of water released into the Truckee River left portions of the bike trail between Tahoe City and Squaw Valley under water, photo by Sylas Wright

There are two other factors Blanchard has to consider when determining how much water to release—evaporation and weather.

“Evaporation is huge on Tahoe. We evaporate more than we ever release normally,” says Blanchard. “At some point in the year, we reach the point where we pass the peak, and the inflow declines and evaporation raises, and then The Lake starts dropping on its own. When that happens varies from April to August.”

Sutter, who has worked as Blanchard’s gatekeeper for 28 years, says evaporation happens mostly in the late summer and fall, when the area gets warm winds and still has long days. But that’s a little late for Blanchard, who needs to keep The Lake from filling up early in the summer when the snow is quickly melting.

Predicting the weather at Tahoe long term is a tricky proposition.

“We take today’s current snow conditions, apply past meteorology to it, and the model kicks out what the inflow will be. We then look at the range of possibilities. The tools are very sophisticated,” says Blanchard. Still, the vagaries of how warm it will get, and when, present a challenge.

Even with the smarts of Church, sophisticated computer tools and the savvy of experienced professionals like Blanchard, Tahoe’s water level is directly tied to the weather. Warm, windy, dry days increase evaporation, while thunderstorms and cloudy days can reduce the evaporation rate and keep The Lake’s level high throughout the summer. 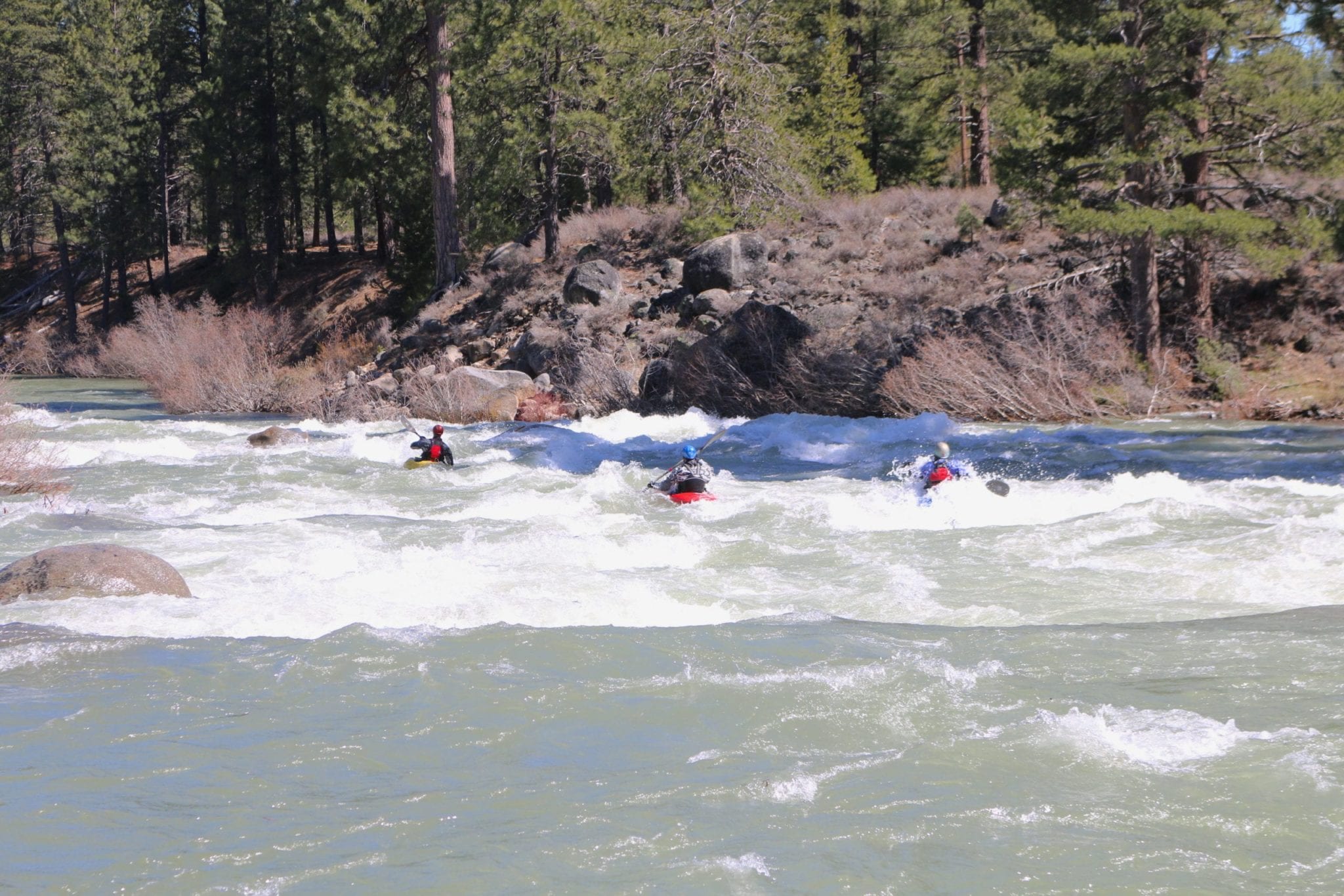 Kayakers enjoy a stretch of whitewater on the Truckee River near Glenshire, photo by Sylas Wright

So what does all this snow science and river decision-making mean for Tahoe recreation this summer? According to Kurt Althof, community information administrator for the Tahoe City Public Utility District, it’s a mixed bag.

Water levels along the Truckee between Tahoe City and River Ranch will be unpredictable throughout the summer, which may impact when and if there is a rafting season, and whether the bike trail will flood at times. Tahoe-area beaches will be much smaller than last year, but, says Althof, “unlike recent years, you can boat or paddle right up to the shore,” making a lake outing not only spectacular, but a shorter walk from the car.

Jennifer Courcier, co-owner of Truckee River Rafting, has seen the river as a trickle and as a flood in her 40-plus years in the rafting industry. While the area’s rafting business owners always hope for a good season, they also understand that there are many factors that go into how much water is released. Courcier says that when rafting does become safe this summer, the spring’s high flows will have created new stream patterns, making for a unique experience for those who have floated the river in the past.

Tahoe City resident Tim Hauserman is a freelance writer and frequent bike rider along the shore of the Truckee River.