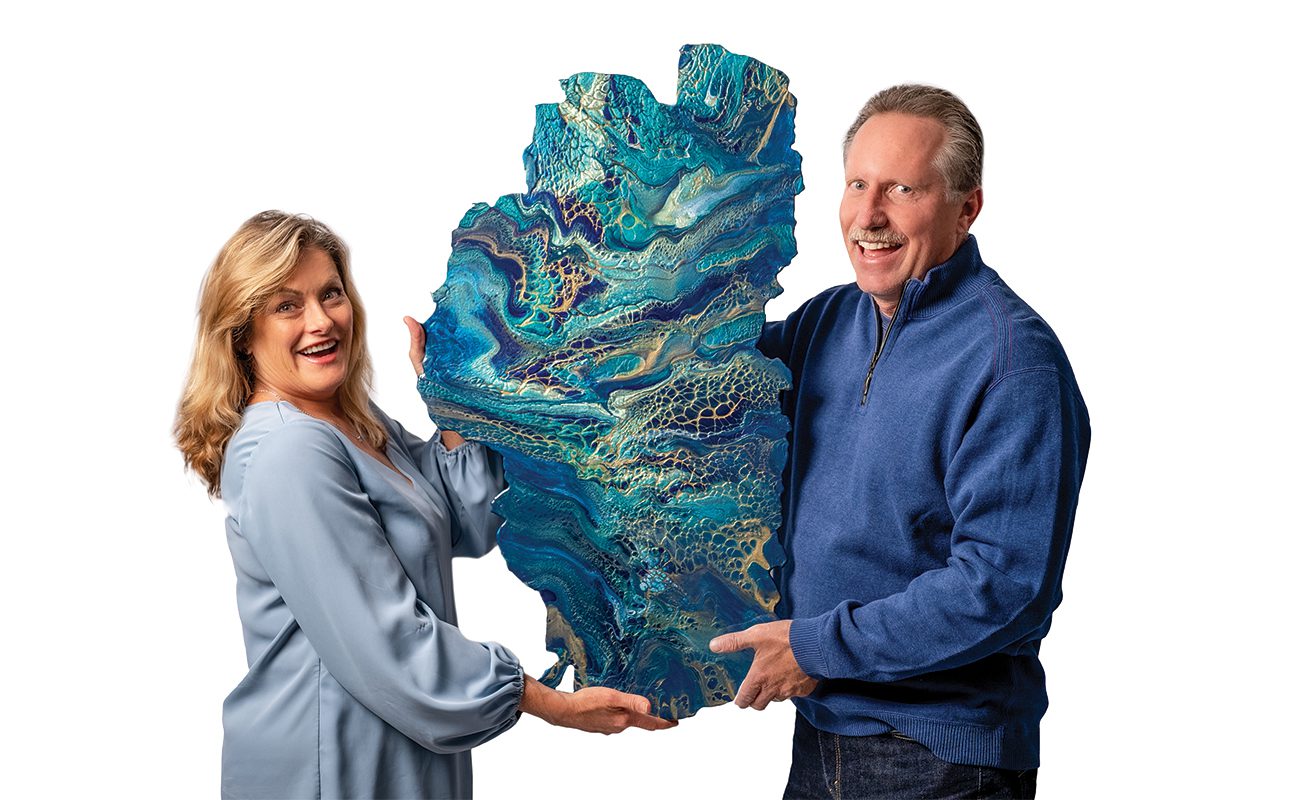 Jewel Tones of the Sierra

Water is notoriously tricky to capture in art. Its translucent shimmers and shadows, ebbs and flows, and everchanging nature make it challenging to translate to a static medium. Perhaps that’s why Megan Smith is so successful in her artwork.

Using a medley of homemade iridescent paints, topped with a resin that makes the hues brighten and glisten in the light, Smith offers an abstract take on Lake Tahoe’s mesmerizing colors and splendor. 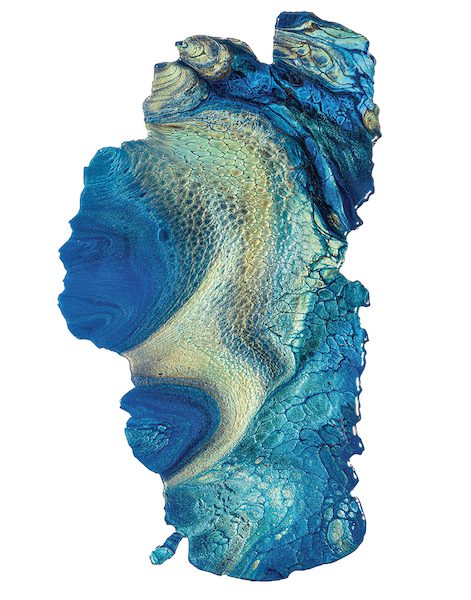 Go With the Flow

Born near Los Angeles, Smith grew up as a self-described “water rat,” spending time boating and swimming on Lake Mohave (which separates Nevada and Arizona) and the Colorado River near Laughlin, Nevada.

“Being on and in the water was an amazing escape in childhood and continues to be in my adult life,” Smith says. “For me, water is the ultimate escape from the gravity of life.”

She attended Malibu’s Pepperdine University, where she earned a business administration degree while taking art electives at every opportunity. After graduation, Smith joined the corporate world. She got married, had two boys, divorced and raised her children as a single mother, all while working in sales and marketing.

“I traveled a lot and every chance I got I went to art museums,” she says. “One of my favorite escapes is renting an audio tour and just getting lost in a museum all by myself. I find it quite indulgent.”

In time, Smith tired of the corporate world. Her boys had grown up, she’d relocated to the South Reno area and she’d married Todd Smith. She quit her job to start her own digital marketing consultation company and worked part-time as a marketing manager for a small business, which allowed her and Todd to get out on Lake Tahoe often on their 21-foot pontoon boat. And, it allowed Smith to indulge her artistic side.

“Life finally slowed down enough that I had some ‘me time,’ and I started to focus on my enjoyment of creating and art.”

Smith’s signature style is known as fluid art, where the artist pours and manipulates paints on a canvas. She’d taken an online art class on the subject during the pandemic.

“This woman spoke up about creating her own paints,” Smith says. “A light bulb went off! I knew immediately that I needed to learn what this woman was talking about.” 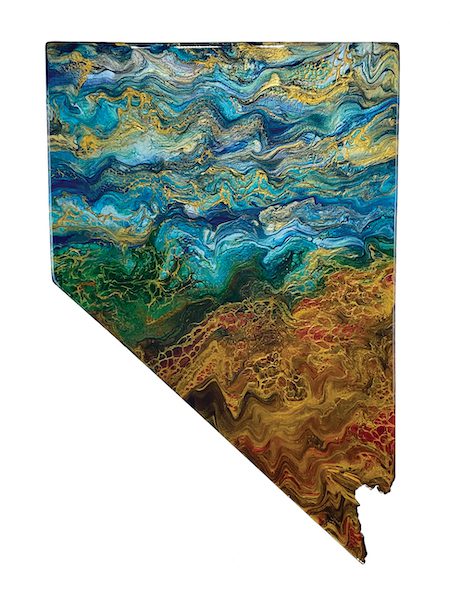 In addition to Lake Tahoe, Smith also creates paintings of Nevada, using wood carved by her husband as the canvas

“My paints are specifically formulated for the type of painting I do,” she says. “I’m still adding to my formulas for different techniques. It’s a constant challenge to come up with the right consistency, clarity and colors that will give me the results I want.”

To create a piece, Smith starts by custom blending her own paints, using at least four and up to 10 or more colors. She allows the paints to solidify, then pours them onto the wood canvases that Todd creates.

“Her artwork needs a solid canvas that will not give in to the weight of the paints,” Todd says. Woodworking is Todd’s forte: His father taught him carpentry when he was young, and he’s been in the construction industry for years. “We figured out quickly that wood would be the canvas she would work on,” he says.

Meanwhile, Smith uses memories and photos to visualize her desired outcome. For example, for a Lake Tahoe piece, she may use vivid shades of blue, often mixed with greens that recall Emerald Bay’s waters and golds that mimic yellow sand churning under Lake Tahoe’s gently lapping waves. Other pieces may bring to mind a Sierra sunset on glassy waters, or the foam left in a boat’s wake. “The various colors of the lake and how they are so different in each area of the lake are always awe-inspiring for me,” Smith says.

“I have a passion for figuring out formulas that make the colors play together, the way I want them to play when I pour and manipulate them on the wood. I’m addicted to glowing, iridescent colors.”

Once the paint dries, Smith goes over each piece with resin, which gives the artwork a glowing, wet-looking finish. “The more light that moves through the resin, the more the colors pop and change.” All told, a typical piece takes about two weeks to complete, and each is an original.

From Hobby to Career

At first, Smith says she was shy to share her art, but Todd insisted on showing pieces to friends. “Those friends supported me and told me I must try to sell them,” Smith says.

She launched a website in the middle of the pandemic, and Todd reached out to places locally to exhibit Smith’s works. She began showing in Reno galleries in 2021 and Lake Tahoe galleries in 2022. When the new North Tahoe Art Center opened in Kings Beach this past June, Smith’s fluid art was included alongside the works of painters, photographers,
stone carvers and glassmakers.

“The Kings Beach location has really been a launching pad for our art in Tahoe,” Smith says. “We are so grateful to have been selected, and the entire North Tahoe Arts team are great people.” She also credits Lisa and Michael Eadington, of the Eadington Galleries in Tahoe City and Heavenly Village, for their help. “We so appreciate their mentoring and support.”

“We rarely bring in new artists,” Lisa Eadington says. “When we saw her work, Michael immediately said we need to have her in. She is amazing.”

Lisa says she keeps four of Smith’s pieces around her desk at her gallery. “I see them and I smile,” she says. And Lisa isn’t the only one to be entranced by the art. “I sold a piece as I was hanging it,” she says. “A lady was like, ‘I’ll take that right now.’”

Smith’s work has been in the Eadingtons’ galleries since the summer, and after only a month, Lisa says, they needed her to bring in more inventory.

“Not only is Megan an incredible artist, she’s also incredibly kind, and that comes through in her work,” Lisa says. “I beam when I’m talking about her work. It shimmers. It brings this flat piece of art to life, and it gives it so much dimension.”

Beyond galleries, Smith often donates her works to charity auctions, particularly to children and animal charities such as Children’s Cabinet and the Nevada Humane Society.

“We are grateful to all that have bid on our art and made it possible for us to raise thousands for the kids and animals,” she says. “We have adopted all of our animals and encourage all to consider making adopting from shelters a priority.”

While Smith’s current offerings prove successful, she continues to evolve as an artist. Recently, she’s been experimenting with colors, trying pieces with a more industrial vibe that mesh an aluminum/silvery color with a sapphire blue.

“I’m excited to see how they are received,” she says, noting that she’s also challenging herself to move beyond Lake Tahoe and its color scheme. “I like changing it up. I’m looking forward to taking some time to focus on some of my ideas for 3-D abstract pieces.”

Whatever she does, Todd will be there to support her.

“It is a wonderful experience to be creating this artwork with Megan,” he says. “I have found that collaborating and working together on the art is a lot of fun and something we never anticipated. I look forward to seeing where this journey takes us.”

Smith adds, “My goal is to challenge myself to be humble, kind and compassionate, and keep an open mind, continually learning and creating. You paint the life you live, no one else.”

To learn more about Megan Smith and her artwork, visit www.tahoefluidart.com or find her works at numerous galleries, including the new North Tahoe Art Center in Kings Beach and the Eadington Galleries in Tahoe City and Heavenly Village.

Alison Bender is a South Reno–based writer and editor.