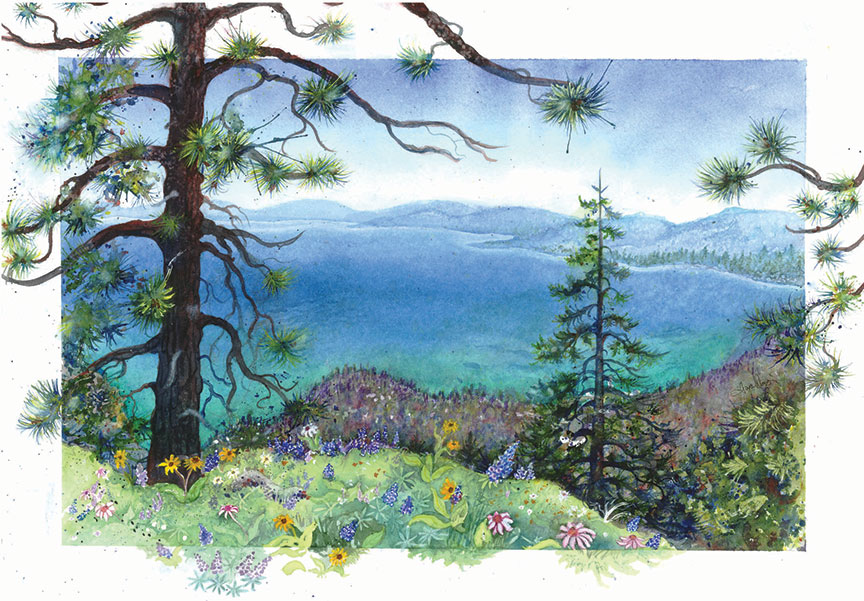 Joyce Major’s professional background in medical technology and law services may not seem like it would translate to painting. But skills honed in those professions—her exacting attention to detail and meticulous approach—are evident in each and every one of her works in her career as an artist.

Major took a circuitous route to both art and Tahoe: Her parents moved frequently and she inherited their nomadic tendencies, residing in Illinois, New York, Kentucky and Florida, where she attended the Florida Institute of Technology. While living in California, working as a paralegal in Orange County, she began to escape the crowds by taking long weekends in the Sierra Nevada. In 2000, at age 50 and after a decade in California, she finally made her escapes to the Sierra permanent, moving to Tahoe and settling down in Incline Village.

Though she loved the mountain lifestyle, she found the area felt very isolated in the winter, so she joined Tahoe City’s North Tahoe Arts. Her first class was a watercolor workshop taught by the award-winning local artist Jan Foss, who died in the summer of 2012. Instantly hooked, Major signed up for more classes while also studying the craft independently.

“I was really obsessed with getting it, so I spent a lot of time at home and with books,” she says. “So I’m more self-taught than anything else.”

After four years of paint and practice, she says, she finally began to produce pieces “that weren’t really ugly.”

It was around that time that Major, who also continues to work independently as a medical legal consultant, founded her art business, Dreamscapes. The name comes from when she first began painting. “When I was learning watercolors, I would stay up all night long,” says Major. “I’d finally fall asleep, totally exhausted and dreaming about painting.”

In the morning, she says, she would “jump out of bed and say ‘now I know what to do!’ My brain was working overtime.”

The results are thoughtful, distinctive landscapes. “I have a unique way of painting—very intense colors and a whole lot of detail,” she says. She notes that when she first took classes, instructors would tell her she had to loosen up, that the colors had to blend. “But I’m very obsessed, very detail oriented,” she says. “As an artist, you can’t escape your own personality.”

Due to the transparency of watercolors, it’s vital to identify the light versus dark areas of a painting before beginning the piece. Major likens it to painting in reverse. “I create almost a negative with masking fluid, which is like a rubber cement,” she says. “I use that where I want whites or very light colors.” After she paints around the light areas, the masking fluid is removed and she can paint over the spaces or leave them white, allowing her to create tremendous detail by rendering the edges sharper, rather than the blurred lines of traditional watercolorists.

Major’s process is often time consuming. “Most watercolor artists usually paint in a few hours or days; mine take weeks or even a year,” she says. “It’s not done until I look and know it’s finished.”

The amount of detail work is highlighted by contrasts, for example, in pieces depicting the frothing rush of streams or the color distinctions in a snow-covered forest. In Tahoe Rushing Waters, which illustrates the rocky descent of Squaw Creek, the top mimics a more traditional watercolor—the less distinct, misty shapes of mountain and sky—while in the foreground, the cascade’s white caps are vividly set against water blues and sharp boulders.

This ability to blend techniques echoes throughout Major’s art. Some paintings are more traditional while others border on surrealism. In works like Lake Tahoe, Pacific Rim, Major experiments with an almost three-dimensional type of painting, allowing tree branches and wildflowers to extend beyond the borders and giving the reader the feeling of being able to step into the picture.

Tahoe landscapes—from Emerald Bay to Sand Harbor, from the Truckee River to the top of Donner Summit—make up the bulk of Major’s portfolio. “Because I work so slow, I can’t paint en plein air,” she says. “Instead, I go out and take a lot of photographs. When I go out there and photograph, I need to have a connection or a feeling to that place. If there’s no emotion in your painting, you have nothing to pass on. When someone sees one of my paintings and wants to buy it, it’s because I’ve passed on this emotion.”

“The very Tahoe-specific colors and the mediums she uses are a really wonderful portrayal of The Lake,” says North Tahoe Arts’ executive director Kellie Cutler. “That famous blue color really comes through.”

North Tahoe Arts, where Major took her first watercolor class, now showcases her work. The nonprofit art center, which hosts classes and special events such as the annual summer ARTour, is home to an artisan shop that features 22 regional artists. Of those, Major is consistently one of the top sellers, which Cutler attributes to her use of color as well as her unique interpretation of Lake Tahoe. “I feel that there’s a little bit of whimsy, too,” says Cutler. “It’s not too serious an approach—it’s more fun and lighthearted.”

While Major is best known for her watercolors, she also paints with oils and acrylics and has found success with her sepia-toned photography. “I work all the time,” she says. “Painting is a passion, so I don’t really even consider it work.”

After 14 years of living in Tahoe, it’s time for Major to move on; she’s relocating to Hawaii to be with her son and two of her four grandchildren. However, while she transitions, she will continue to display her work through December at both North Tahoe Arts and at Incline Village’s Artists at Lake Tahoe.

“I keep thinking I won’t paint Tahoe anymore,” says the artist, even as she prepares to move her life to Hawaii. “But there are so many beautiful places just driving down the road. Really, how could anyone resist Emerald Bay?”

Most of TQ contributing editor Alison Bender’s artistic energy is used on Dora the Explorer coloring books with her two daughters.