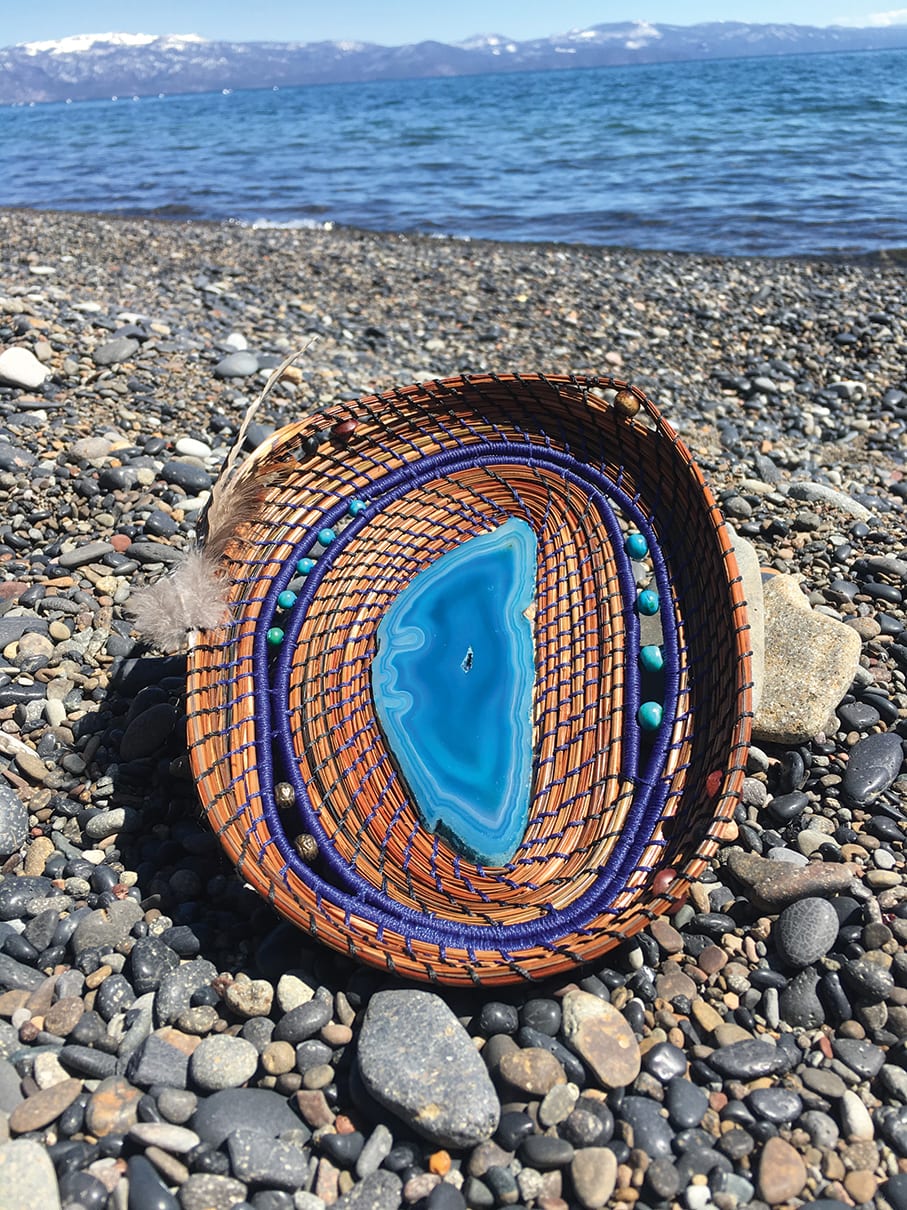 Weaving Past and Present 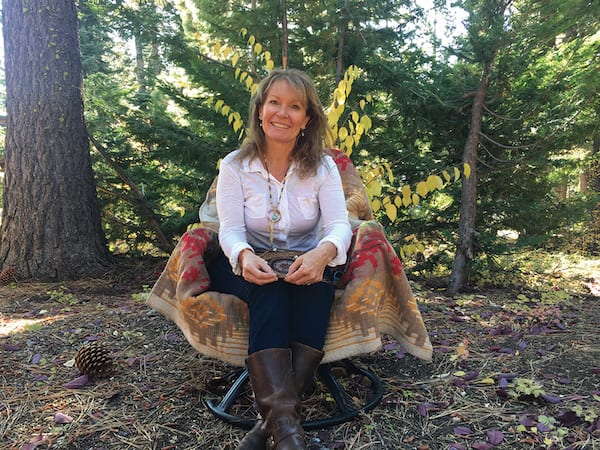 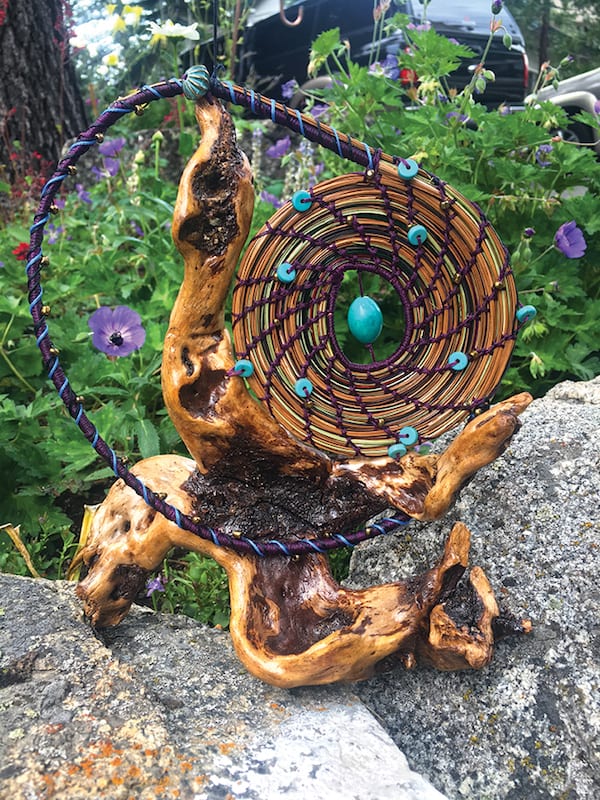 A dreamcatcher is woven around a unique piece of wood, courtesy photo 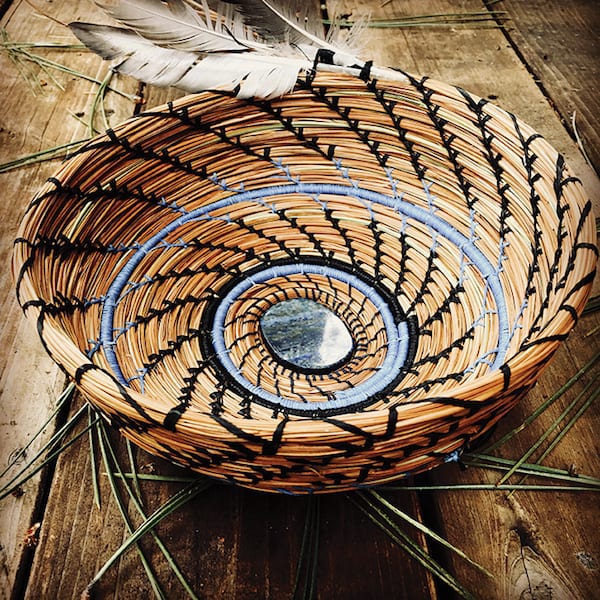 Careful preparation of the pine needles, to include bathing and baking in glycerin, keep them supple during the weaving process, courtesy photo 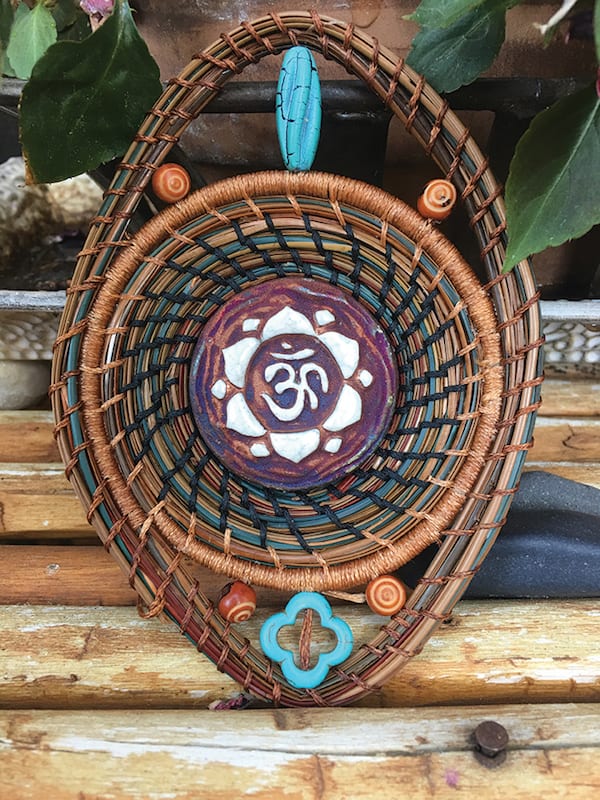 Using a ceramic tile as a centerpiece and accented with dramatic turquoise beads, this woven piece is more sculpture than basket, courtesy photo 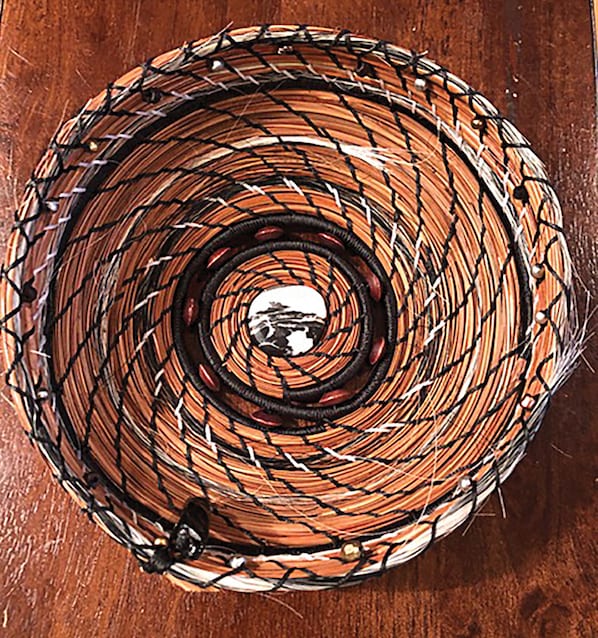 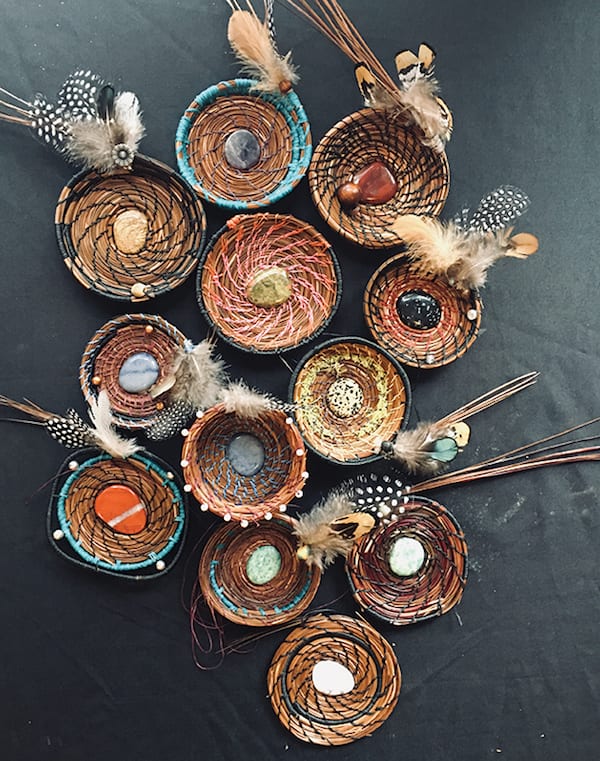 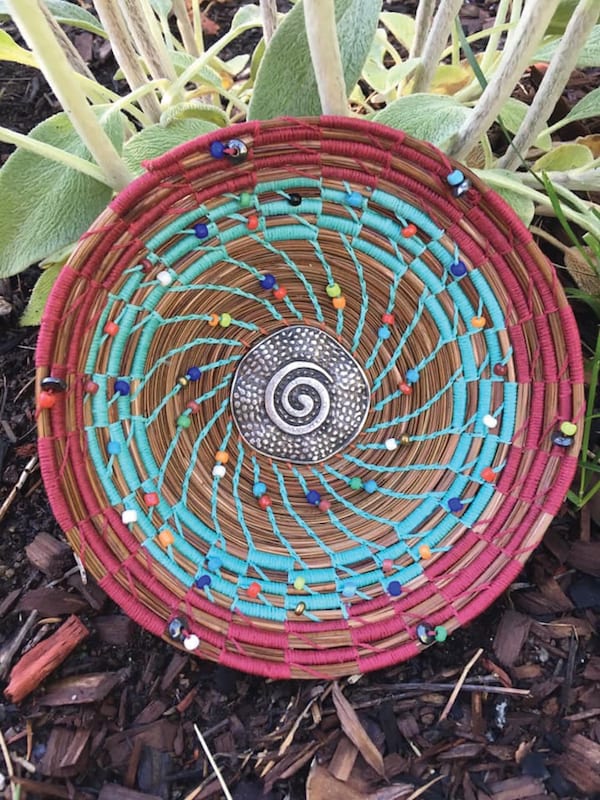 While Dodge’s creations have a distinct modern style, basket weaving has a long local history, dating back thousands of years, courtesy photo 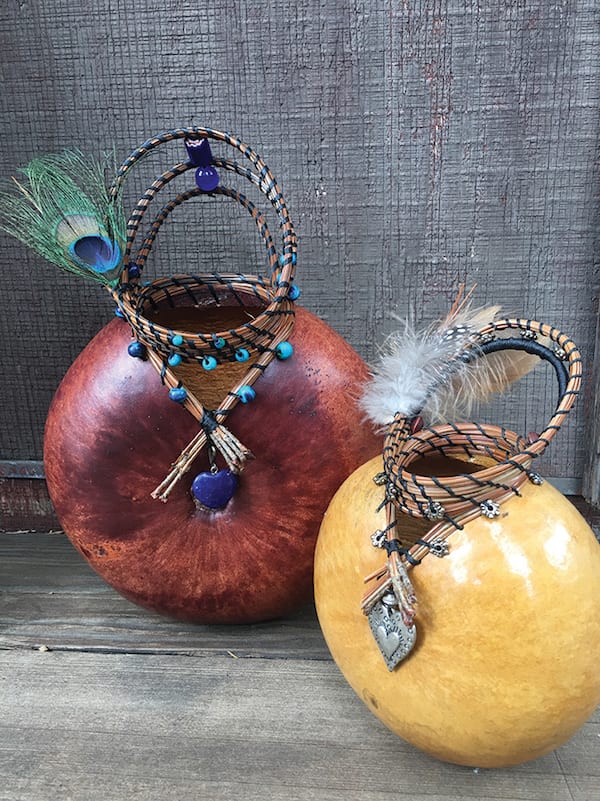 In centuries past, members of the Washoe Indian tribe would harvest Tahoe’s reeds and pine needles to weave into utilitarian baskets. Between about 1890 and 1935, those baskets evolved into decorative masterpieces, featuring innovative motifs and tight stitching. But in the decades since, the art of basket weaving has been largely absent from Lake Tahoe’s shores. That is, until recently, when North Lake Tahoe native Karey Dodge decided to learn the craft.

A resident of Tahoe City, Dodge spent her early adult life traveling, first as an exchange student in the Philippine Islands, then as a nanny for an English family outside of London, a position that allowed her to explore all over Europe. When she returned to the United States, it was to a small village in Alaska. There, she acquired a basket made by an Athabaskan native, an artifact that “I treasure still,” she says.

Dodge eventually moved back to Tahoe and spent 25 years working as a purchasing agent for the North Tahoe Public Utility District until she retired in 2018.

Since childhood, Dodge had been creative. When she happened to see a display of gourd art at the Reno-Tahoe International Airport, she decided she wanted to learn the craft herself, so she ordered the gourds, dyes and other supplies and “just went for it with my own flair,” she says.

Basket weaving was the same—Dodge decided she wanted to learn the craft and just went for it.

“Growing up at Tahoe, we always heard of the famous basket weaver Dat So La Lee, and would see her beautiful baskets in Tahoe City and wonder, ‘How in the world did she make these?’” Dodge says.

For years, she hunted for classes, but was unable to find any. She’d wanted to take classes at Mono Lake, which were taught in a traditional Native American style, but they were always full. By chance, in 2017, she happened to find a class at the artist workshop space Atelier Truckee. “I was so inspired,” Dodge says. “I went home and ordered all the supplies and books that same day.”

She also connected with Sheri Smith Holgate, a master weaver in Oregon and the author of the book Pine Needle Creations.

“She was amazing and inspiring,” Dodge says, noting the two stay in touch to discuss basket weaving. “I learned so much from her.”

Two years and some 150 woven creations later, Dodge has not only gone from beginner to expert, she’s done it all with her very own flair.

To create a basket, Dodge first assembles her materials. She says the best time to collect local pine needles is in the fall, when the wind blows them from trees but before rain or snow can damage them. Other times of the year she’ll order longleaf pine needles from South Carolina.

“I like to choose the centerpiece first, then the color scheme, then some beads,” she says. “They sort of take on a personality of their own.”

For a centerpiece, she may use a locally harvested piece of wood, like manzanita or juniper, or perhaps a button, upcycled pendant or stone.

“I really like to use gemstones as the centerpiece,” Dodge says. The symbolic meanings to the gemstones—such as strength, love, protection, calmness and patience—add extra energy to the baskets. “I feel like they make the baskets very special.”

Once a centerpiece is chosen, she glues it to a piece of leather. Then, using a waxed linen thread and artificial sinew, she begins to weave the piece, sometimes adding in beads or intricate spacing, before finishing with a coat of beeswax.

Since beginning basketry in 2017, Dodge’s creations have evolved, becoming more detailed and complex.

“As an artist, you have to go outside your comfort zone,” Dodge says. “I like to experiment with new stitches, colors and shapes. I try to stretch my limits by using new combinations; I’m always on the search for something unique—feathers, wood, beads, charms—to incorporate into a basket.”

Bernardo commissioned a basket for which Dodge incorporated the tail hairs of Bernardo’s 34-year-old horse, Maddy, weaving them in with the pine needles. At the center of the basket is a black-and-white zebra jasper stone that matches the horse’s coloring.

“My horse won’t be around much longer,” Bernardo says. “I told Karey that the basket means a lot to me now but will mean even more once my horse is gone.”

Tahoe City resident Kathie Fenley has purchased two of Dodge’s baskets as gifts and another two for herself (“I think she’s my biggest fan,” Dodge jokes). Of her two, Fenley says, one has “a beautiful blue stone that looks reminiscent of Lake Tahoe,” while the second uses brown and red needles, black and green coiling, and white beads, with a green stone in the middle. “It’s really pretty,” Fenley says. “It’s almost like a solid dreamcatcher.”

Passing on the Craft

Dodge took to basket making naturally, and her husband, Willi, and friends were very supportive of her passion. She began posting pictures of her creations online, where she’d get requests not just for basket orders, but from people who also wanted to learn to weave.

Fenley says she messaged Dodge and pushed her to share her gift. “I told her I wanted to buy one of her baskets and I was confident she could teach classes,” Fenley says. At first, she says, Dodge hedged, unsure about the idea. “She warmed to the idea and then she was off and running because she’s a natural teacher,” Fenley says.

Now, Dodge puts on workshops several times a year through Tahoe City’s North Tahoe Arts, which is also where she sells her baskets. Dodge comes prepared with all the materials—to include various embellishments—and walks participants through a four-hour class. “Everyone leaves with a sweet little basket,” Dodge says.

Bernardo has taken three workshops with Dodge. “The pine needle baskets are really part of this area. It always intrigued me to do something that was a local craft for so long,” she says. “Her workshops are fun; it’s nice camaraderie. You’re learning something that is indigenous to our area with the pine needles.”

Tahoe City resident Jan Brisco agrees. She’s long enjoyed the baskets on display at the Marion Steinbach Indian Basket Museum, a part of Tahoe City’s Gatekeeper’s Museum, and was excited to learn to weave herself. Brisco took one of Dodge’s workshops in the spring of 2019.

“I had no prior experience with basket weaving,” she says. “She was absolutely patient and knowledgeable; you can tell she has a passion for the craft.”

Brisco ended the class with a basket of her own. “I kept it very simple, but I adore it,” she says. “I have it on my dresser and I look at it every day.”

Basket weaving has a long history at Lake Tahoe. The Washoe Indian tribe, which frequented Lake Tahoe’s shores for thousands of years, would harvest materials and create baskets for both utilitarian and ceremonial reasons.

“The Washoe tribe used pine needles, but they used other natural fibers from riverbanks and bushes,” Dodge says. “They worked really hard gathering all the materials, and a lot of their baskets were for functional use.”

However, in the late 1800s, degikup basketry, known for its artistry and designs, took off. Dat So La Lee, also known as Louisa Keyser, is the Washoe’s most famed basket weaver, though other renowned basket artists included Sarah Mayo, Maggie Mayo James and Lena Dick. The Marion Steinbach Indian Basket Museum hosts hundreds of baskets, from those meant to carry infants or food to the fancier degikup styles.

This link to the area’s past is one of the reasons Fenley so enjoys Dodge’s workshops. “Take a class,” she says. “It transports you. Not just in the creative aspect, but the whole experience of connecting to the past. Women have been making basket for hundreds or thousands of years.”

Dodge appreciates the history associated with the craft, which she finds meditative and therapeutic.

“I hope I am honoring this ancient art form,” Dodge says. “I live just minutes from where Dat So La Lee wove her famous baskets, and sometimes I go to that very spot, I sit and try to feel her energy, and wonder what she might think of my baskets.

“I know she taught the young girls in the tribe to weave baskets. And I feel through my workshops, I am passing this ancient art form on as well.”

Karey Dodge’s baskets are available at North Tahoe Arts. She also hosts workshops several times a year through NTA or by request. More information can be found at www.northtahoearts.com.

Alison Bender is a Reno-based writer.