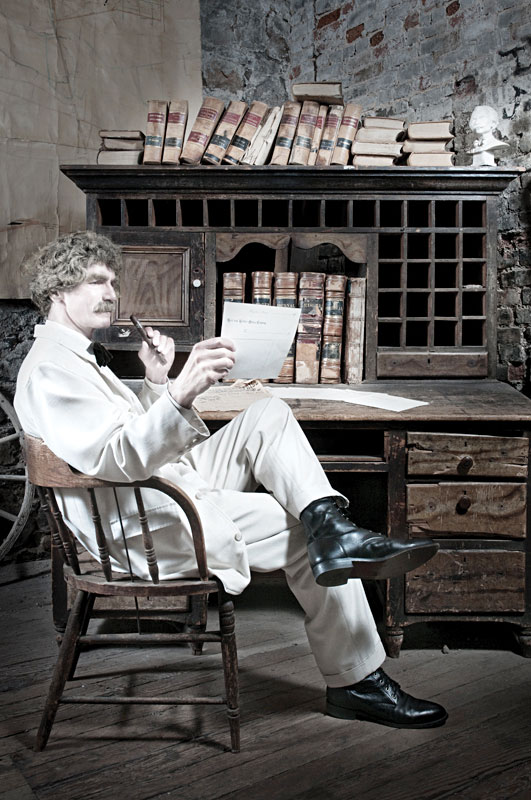 Written by McAvoy Layne Posted at 01:33h in Best of Tahoe 2013, My Sierra 0 Comments
Share

Becoming Mark Twain for a summer afternoon’s “Tales of Tahoe” cruise aboard the Tahoe Queen is a royal pain in the neck. I pull the ski mask over my head and adjust the mouth aperture to circumscribe my mustache. Then I feel my way outside, and while the children run off screaming, I fire away with the frosty white hair spray.

I used to keep a can of that spray up in the wheelhouse of the Queen, but I don’t anymore. As the crew related to me, a bride went up into the wheelhouse to make last minute preparations before stepping out onto the bow to take her vows.

Happening to notice a can of hair spray, and seeing how windy it was on the poop deck, she grabbed the can, closed her eyes, and battened down the hatches, so to speak. But she failed to read the fine print: FROSTY WHITE!

There are no windows up there in the wheelhouse, so having no idea what she had done, out she stepped. Well, the crew told me they had to stuff napkins in their mouths to keep the laughter down, because she looked 30 years older than the groom.

They said his eyes stood out and you could have put a ham in his mouth without his noticin’, and that she’s still looking for me. So I don’t keep that can of frosty white hair spray up there in the wheelhouse anymore.

From the end of May until the middle of September we cruise out of Ski Run Marina at 2:30 p.m., glide into Emerald Bay, slow to a stop in front of Vikingsholm, then slowly circumnavigate Fannet Island, arriving back at the marina in time for happy hour.

Along with Twain’s Tales of Tahoe we get into a lively Q&A session that sometimes continues into the parking lot and beyond.

The air that angels breathe suddenly turns heavy in an awkward silence. “Well, I knew when I was your age … Look it up in the library, why don’t you?” Then, under my breath, “ … the little bastard.”

“Why do you wear that white suit around when it’s hot as blazes?”

Sometimes, on true Twain days, I get to go from the Queen to a second job, like warming up the crowd for Leonardo da Vinci at the Lake Tahoe Chautauqua.

“I am here tonight to perform some amazing feats. At a given signal I will stand up with any man in the audience and take a glass of chardonnay. And upon request, to prove there is no deception, I shall repeat this feat.”

After a series of “stretchers” that stretch the truth a little, and “lifters” that lift the furniture, I finally get around to introducing Leonardo.

“Gold in its native state is but dull, unornamental stuff. Only low-born metals excite the admiration of the ignorant with an ostentatious glitter. However, like the rest of the world, I go on underrating men of gold and glorifying men of mica.

“I am going to join you now for this exciting moment in living history, and drink to Leonardo. There are a thousand reasons why I shouldn’t take a drink, but I can’t think of one right now.”

Becoming Tahoe’s Mark Twain provides many wonderful opportunities, including a comfortable deckchair at Sand Harbor to revel in the presence of the great da Vinci, whom I secretly hate in my heart of hearts for making the rest of us look lethargic and dumb as clams.

At the end of a perfect Tahoe day I take the hand of the devastatingly adorable, blue-eyed lady sitting next to me and ask, “Can a gentleman escort the lady to the Hyatt for a nightcap?”

To which she replies, “Isn’t it past your bedtime? I mean, you are 170 years old!” So ends an almost perfect summer evening at the Lake of the Sky.

I might like to mention in closing that I’m a big fan of the Tahoe Quarterly. They cover everything from gangsters to wooden boats. But they neglected to mention in their recent article on Tahoe’s underworld that we have several gangsters on the bottom of this lake; yes, they’re stacked up down there like cordwood. Did I ever tell you about Frankie the Breeze Calabrese … ?

For 19 years now, in over 2,000 performances from Leningrad University in Russia to Piper’s Opera House in Virginia City, Incline Village’s McAvoy Layne has been preeminent in preserving the wit and wisdom of “The Wild Humorist of the Pacific Slope,” Mark Twain. For more on Layne or to find a performance, visit www.ghostoftwain.com.