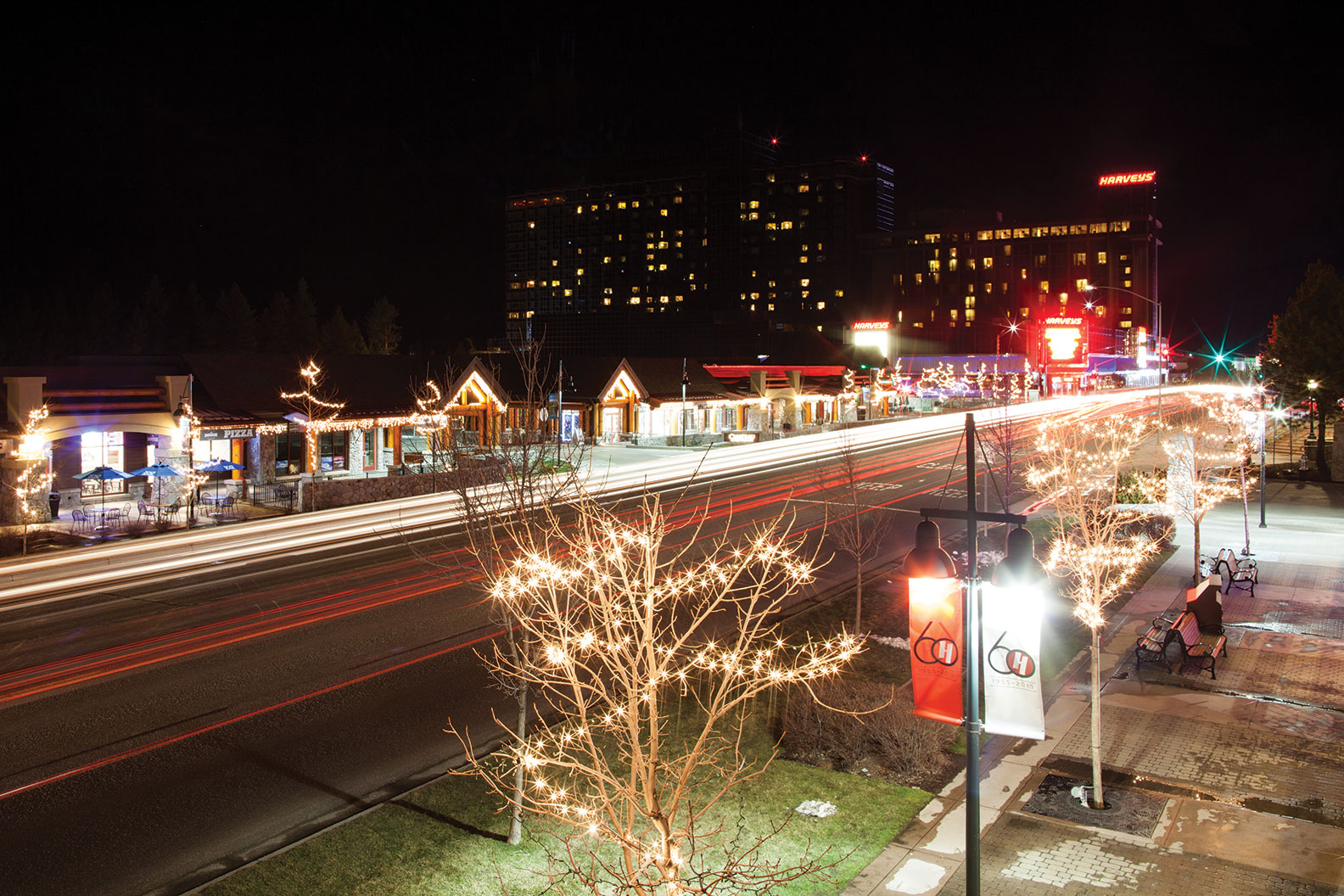 in Around Town | Best of Tahoe 2016 | Written by Dylan Silver

The Tahoe Transportation District (TTD) is proposing major changes to South Tahoe’s main artery. The agency, which manages many of the transportation projects around the Lake Tahoe Basin, is proposing a $70 million project to reroute U.S. Highway 50 and turn the casino corridor into a community-oriented thoroughfare.

The project, officially known as the U.S. 50/South Shore Revitalization, would redirect Highway 50 from California’s Pioneer Trail around the east side of the casinos to Nevada’s Lake Parkway, and narrow the current five-lane highway into a two-lane street with additional commercial space and pedestrian and bicycle byways. The Tahoe Regional Planning Agency (TRPA) has yet to release an environmental impact report for the proposal, but some South Lake Tahoe residents have already turned out against what’s become known as the Loop Road.

“These kind of comprehensive what we call ‘corridor solutions’ are not easy, but they are worthwhile and they can be done,” says Carl Hasty, TTD manager. “We’ve been having success with them in other parts of The Lake, and they’re worth doing.”

The goals of the project include reducing traffic congestion, improving alternative transportation options and revitalizing Stateline’s commercial area. An economic analysis of the project released by TTD estimates retail sales in the area would increase between $16 million and $25 million annually.

Opponents say the project would displace residents, do little for South Shore’s California side and repeat the mistakes of past projects in the area.

“Are we going to do this project and have all these promises made and then find out that not all of them are true?” says Bruce Grego, a former South Lake Tahoe city councilman who opposes the project. “There are a lot of questions that haven’t been answered.”

TTD officials have developed five options for the project, to include taking no action. Two of the four alternatives revolve around rerouting the 1.1-mile stretch of Highway 50. One would construct a pedestrian “greenway” above the current highway. The other would divide the section of the highway into two one-way streets and move the westbound traffic around the casinos. Without an environmental document from TRPA, TTD officials have yet to choose a preferred alternative. Hasty expects a decision late this summer. 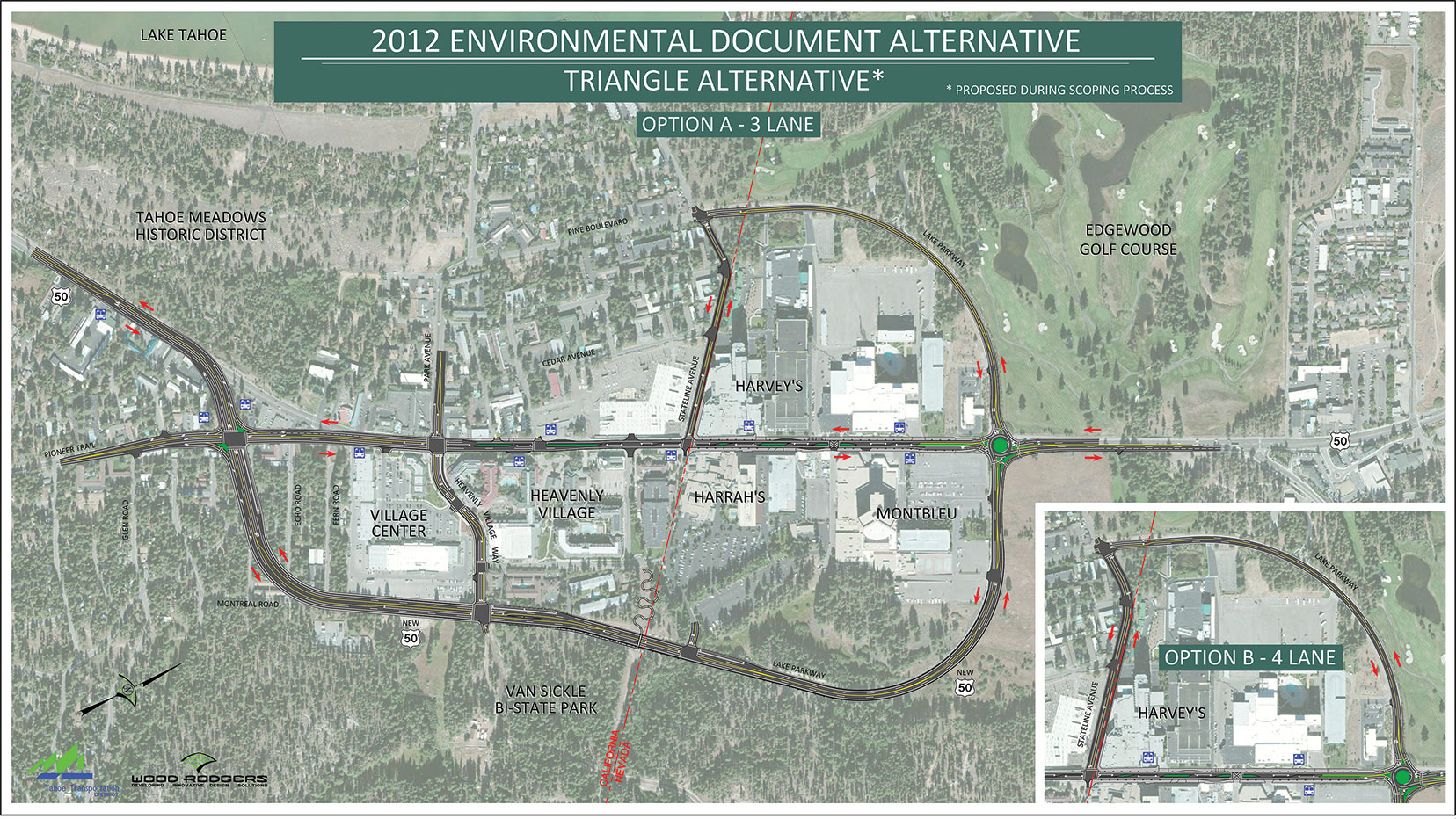 If the agency chooses one of the options to move the highway, the Stateline community will see a significant impact. Over 70 residential and business units stand in the path of the proposed roadway. TTD officials have developed a relocation plan to help those who would be displaced as well as a website, connectsouthshore.com, to release information about the project.

Agency officials hope to build housing to replace the residences demolished by the project, though the costs have not been factored into the $70 million price tag.

“Ideally, our first target would be how could we start building the replacement housing in advance of starting the project,” Hasty says.

What many opponents of the project point out is the long history of the Loop Road. The idea to move the highway behind the casinos was first suggested in 1980. The project gained some momentum through the late ’80s and early ’90s, but faltered in the late ’90s and early 2000s. TTD took the reins in 2009 after TRPA reinitiated the planning.

Opposition to the Loop Road has been steady and is now formally organizing. In a group called “Let Tahoe Decide,” Grego and other opponents are working to get a measure on the November ballot blocking the city council’s support for the Loop Road.

“I think the voters should decide this issue and not the city of South Lake Tahoe, based on their inadequate record in the past of approving such large projects,” Grego says. “If we’re going to make a mistake, let the voters do it. Don’t let the city do it.”

If the voters back the city’s support for the project, Grego would support the people’s will, he says. Others aren’t so easily convinced.

In the Stateline area, many residents haven’t even heard of the project or are unsure of what stage it’s in. Jose Vasquez has lived on Fern Road for eight years. He likes the neighborhood.

“I’ve lived here for a long time,” Vasquez says, standing outside the home he rents. “It’s been good. I don’t want to move.”

Michael Valiente moved to Stateline in 2004. He’s been following the project through the local news and through updates his friends post on Facebook. He’d prefer not to relocate, but supports the project because he believes it would benefit the town, he says.

“It’s a nice destination, but we have to do something about the traffic,” Valiente says. “I work at MontBleu and we get a lot of complaints.”