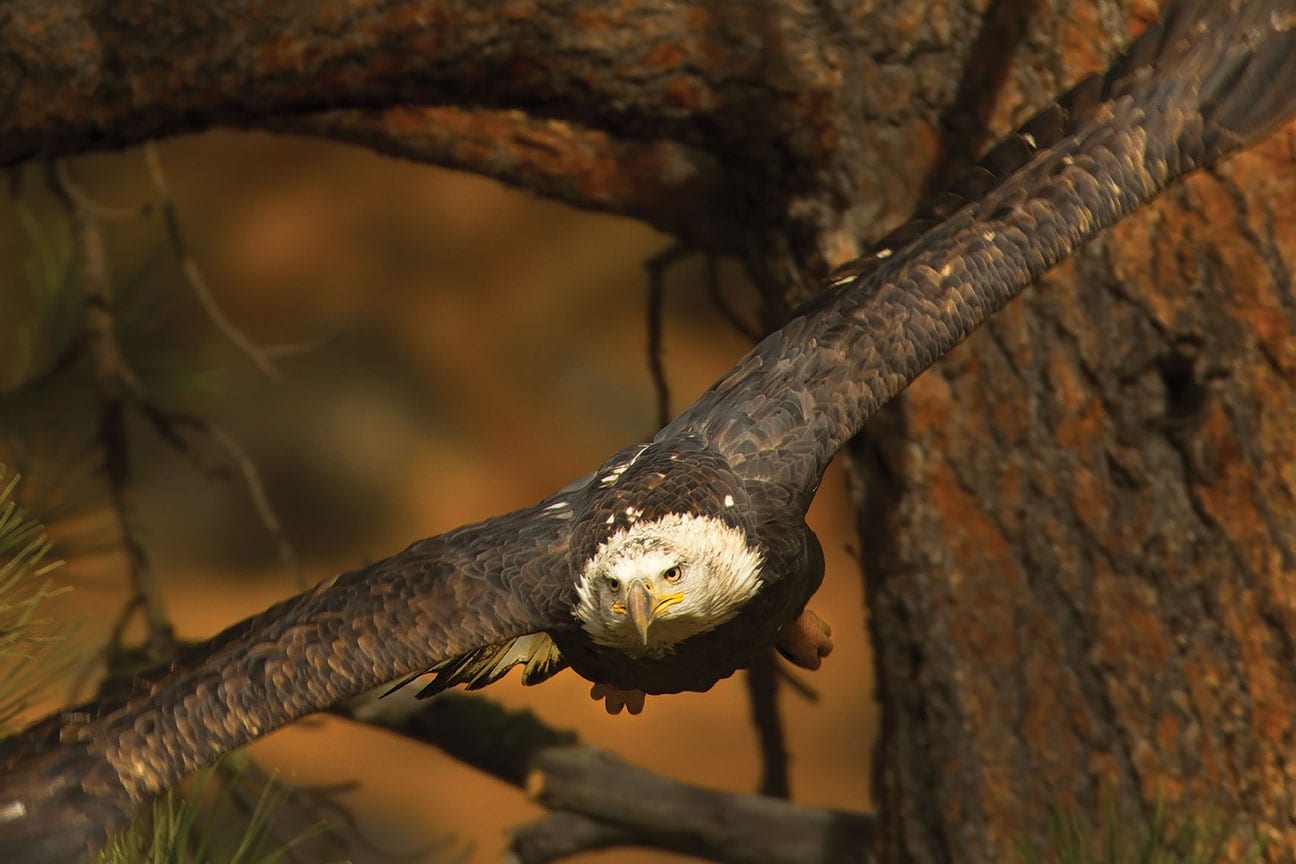 Once on the brink of extinction, bald eagles are now thriving in the Tahoe Basin and beyond

The local Paiutes call them “ggwe’na’a.” The Shoshone, “biagwi’yaa.” To all Americans, they are our national symbol.

The bald eagle is one of the most magnificent examples of avian evolution. And the good news is the Tahoe population is in excellent health, with three or four year-round nesting pairs, according to research by the Tahoe Institute for Natural Science. In addition to the full-time residents, other bald eagles visit the Tahoe area to dine.

With an average wingspan of seven feet and a top flying speed of a scorching 100 miles per hour, one cannot help but be awestruck seeing these majestic birds of prey in the wild. Bald eagles are scavengers by trade, with fish as their top choice on the menu. Unlike ospreys, which employ a kamikaze-like dive headlong into the water to secure a meal, bald eagles prefer to steal their meals. They allow the ospreys to do the fishing before robbing them midflight of their hard work. When bald eagles and ospreys share the same waterway—which is often the case on Tahoe and neighboring lakes such as Donner and Fallen Leaf—an osprey will sometimes have to catch several fish before it gets to keep one for itself. It’s nice to be the alpha bird.

That’s not to say that bald eagles aren’t willing to take wing for a hunt. These raptors will skim inches above the water at breakneck speeds with talons extended to spear a fish. Other animals, such as waterfowl, reptiles, rodents and even other birds of prey, are all potential meals during the eagle’s 15- to 25-year lifespan. The bald eagle’s name is somewhat misleading. This eagle is certainly not bald like a turkey vulture or condor. Rather, it has a royal plume of white feathers for a headpiece. These distinctive feathers do not appear until adulthood, between 4 and 5 years of age. During adolescence, young bald eagles display varying amounts of mottled brown plumage and are often mistaken for golden eagles. Once threatened to the point of near extinction, the bald eagle’s recovery as an endangered species is a remarkable lesson in wildlife conservation. When bald eagles were adopted as the national symbol in 1782, the country may have had as many as 100,000 nesting eagles. By 1963, those numbers had dropped to a mere 417 nesting pairs in the contiguous United States, according to the U.S. Fish & Wildlife Service.

Numerous factors contributed to the severe depletion of the population, but the main culprit was the introduction of the chemical pesticide DDT after World War II. DDT did not kill the eagles and other birds of prey directly, but caused the shells of their eggs to soften, leaving embryos unhatched. In 1972, DDT was banned for agricultural use. A strong effort for habitat preservation accompanied the fight against the chemical, and after decades of recovery, the bald eagle was removed from the federal list of threatened and endangered species in 2007. Today, researchers estimate over 70,000 bald eagles reside in North America, including nearly 10,000 nesting pairs in the lower 48 states. Although they were delisted as an endangered species, threats to their well-being remain, such as complacency, lead poisoning from gunshots left in waterfowl, illegal shooting, power line electrocution and habitat destruction. With DDT all but eliminated, habitat remains a big concern. One worry is that bald eagles require mature, old-growth stands of coniferous and hardwood trees for perching, roosting and nesting. To illustrate the importance of these stands of trees, a bald eagle nest can measure eight feet across and weigh up to a ton, making them the largest nests of any bird.

For residents of the Tahoe area, the fruits of local conservation efforts can be seen year-round. In the fall, when populations grow with northern eagles migrating south, the streams and tributaries of the Truckee River swell with Kokanee salmon, drawing bald eagles in large numbers. Taylor Creek, which flows from Fallen Leaf Lake to Baldwin Beach on Tahoe’s southwest shore, is a popular location to view bald eagles snatching an easy meal. While efforts to protect our local, national and global natural resources remains an ongoing struggle, the bald eagle serves as a stately reminder that those efforts are well worth it.

Reno photographer Philip DeManczuk is an internationally published and award-winning environmental photojournalist. Find more of his work at www.demanczuk.com.