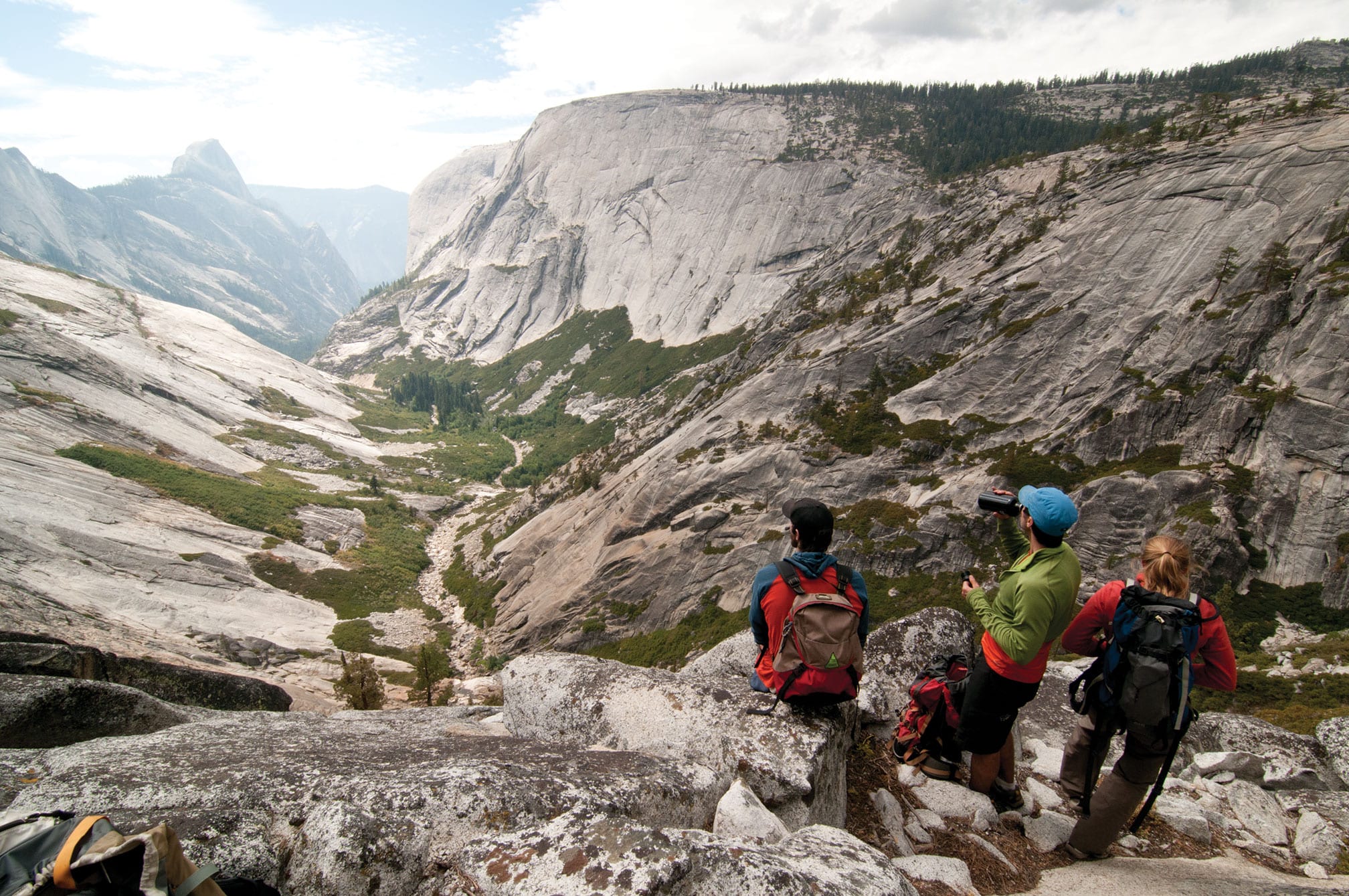 Ken Coleman, Ryan Smith and Megan Mahaffey ponder the adventure ahead while soaking in their first view of Tenaya Canyon, photo by Seth Lightcap

Like a moth to a flame, the curse only made us more curious. What could really be that sketchy down there? There was only one way to find out.

The sun was just cracking the horizon on a hot August morning when we took off from the Tenaya Lake trailhead in Yosemite National Park—a loose but experienced crew of six climbing buddies who lived for High Sierra hijinks of any variety. Stoke was high sauntering down the trail, as we knew we were in for a special experience that day. Years into our Yosemite adventure hit list, we were finally going to attempt a one-day descent of the infamous Tenaya Canyon.

Like a bobsled track carved by a glacier, Tenaya Canyon is a dramatic, 10-mile-long gash in the earth that drops 4,000 feet from the outlet of Tenaya Lake down to the floor of Yosemite Valley. The canyon floats through a series of steep, polished cascades and boulder-strewn watercourses before plummeting into a narrow gorge that dumps out just above the base of Half Dome. The seasonally raging Tenaya Creek guards the depths of the canyon, carving it ever deeper each spring as torrential runoff pours down from the surrounding peaks.

Literally millions of eyeballs look down on Tenaya Canyon each summer from Olmsted Point and the summit of Half Dome. But unlike most areas of Yosemite, the canyon sees very few footprints. The park service actively discourages hikers from entering the canyon, in fact. Why? Beyond inherent dangers like mandatory cliff rappels and slick granite ledge traverses, Tenaya Canyon is notoriously cursed. Tenaya Lake, Creek and Canyon are named after Chief Tenaya, the last Native American chief to live in Yosemite. In the 1850s, a battalion of armed white settlers attempted to oust Chief Tenaya and his tribe from the valley and deport them to a reservation near Fresno. The chief’s son was killed in the struggle, which inspired him to forever curse the battalion captain and all white men who attempted to descend the canyon.

Based on numerous incidents over the years, many believe that the chief’s curse was not an idle threat. The history of Yosemite includes dozens of tales of mysterious accidents and unaccountable deaths in or around Tenaya Canyon. The canyon has been the scene of so many rescues that the park rangers dubbed it the “Bermuda Triangle” of Yosemite. Even John Muir, who is believed to be the first white man to explore the canyon in the 1870s, felt the wrath of the curse. Muir penned this account of a near-fatal fall in the lower stretch of the gorge in a letter to a friend in 1873:

“I was ascending a precipitous rock front, smoothed by glacial action, when I suddenly fell—for the first time since I touched foot to Sierra rocks. After several somersaults, I became insensible from the shock, and when consciousness returned I found myself wedged among short, stiff bushes… I could not remember what made me fall, or where I had fallen from; but I saw that if I had rolled a little further, my mountain climbing would have been finished, for just beyond the bushes the canyon wall steepened and I might have fallen to the bottom.”

After a couple miles of hiking through forest and slabby granite benches, the first major obstacle on the descent is a 600-foot waterfall called Pywiack Cascade. Friends told us it would be fairly obvious how to down-climb past the falls, but it wasn’t. We ended up rappelling through some bushy cliffs to the right of the cascade.

Once the ropes came out somebody casually joked about the curse: “Better double-check that belay device, buddy. Any visible stress cracks?” We laughed it off, as we knew what we were doing. But for once, everybody double-checked their harness buckles before dropping in. Thankfully, it was smooth sailing for all of us down the rappel. Soon we were lunching at the base of the cascade and swimming in a spectacular pool that looked out toward Mt. Watkins and Half Dome. From the bottom of Pywiack, the route enters a jumbled maze of massive boulders and granite slabs. The creek was merely a trickle by this point in the summer, so we hopped along boulders, making good time toward the next serious stretch of the canyon—the inner gorge.

The entrance to the inner gorge is unmistakable. The granite slabs fall away into a deep chasm guarded by towering cliffs on both sides. There are two options for continuing from there—either rappel down the cliffs or jump off a precarious ledge into a deep but narrow pool of water 40 feet below. The boldest of our crew deftly jumped into the pool. The rest of us rappelled.

Traveling down the inner gorge demanded careful footwork, as the water-polished granite slabs were slick even where dry. For a stretch the gorge was barely 50 feet wide, with house-sized boulders chalked in the bottom. We scrambled around most obstacles but had to rappel past a couple pinches. One rappel forced us to descend through a waterfall into a waist-deep pool of frigid water. Exiting the water, we wondered if hypothermia might be our curse as we struggled to stop shivering and push on. Fresh off a rappel into frigid water, Ryan Smith exits a pool in the inner gorge, photo by Seth Lightcap

Another mile of boulder-hopping warmed us up, but at the same time, misfortune abruptly struck. A member of our group twisted an ankle while down-climbing a slippery slab. We debated calling in a rescue. The swelling wasn’t too severe, though, so the injured decided to tough it out and limp the last couple miles. The park service purposefully does not maintain a trail in the canyon even after the inner gorge, so the cross-country travel continued as we searched for the path of least resistance through thick stands of brush and jumbled talus.

Finally catching a real trail near Mirror Lake brought satisfaction and a sigh of relief. One twisted ankle, but no major injuries. We’d completed the tour in good time—about 10 hours.

Walking out the final mile to the car, we didn’t say much. No doubt we were tired, but more so in awe of the whole experience. We’d been granted passage through stunning and seriously hallowed ground. Our hearts were on fire with gratitude to Chief Tenaya and all the spirits of the Sierra.

Seth Lightcap is a Truckee-based writer, photographer, snowboarder and mountain biker. Find more of his work at www.sethlightcap.com.