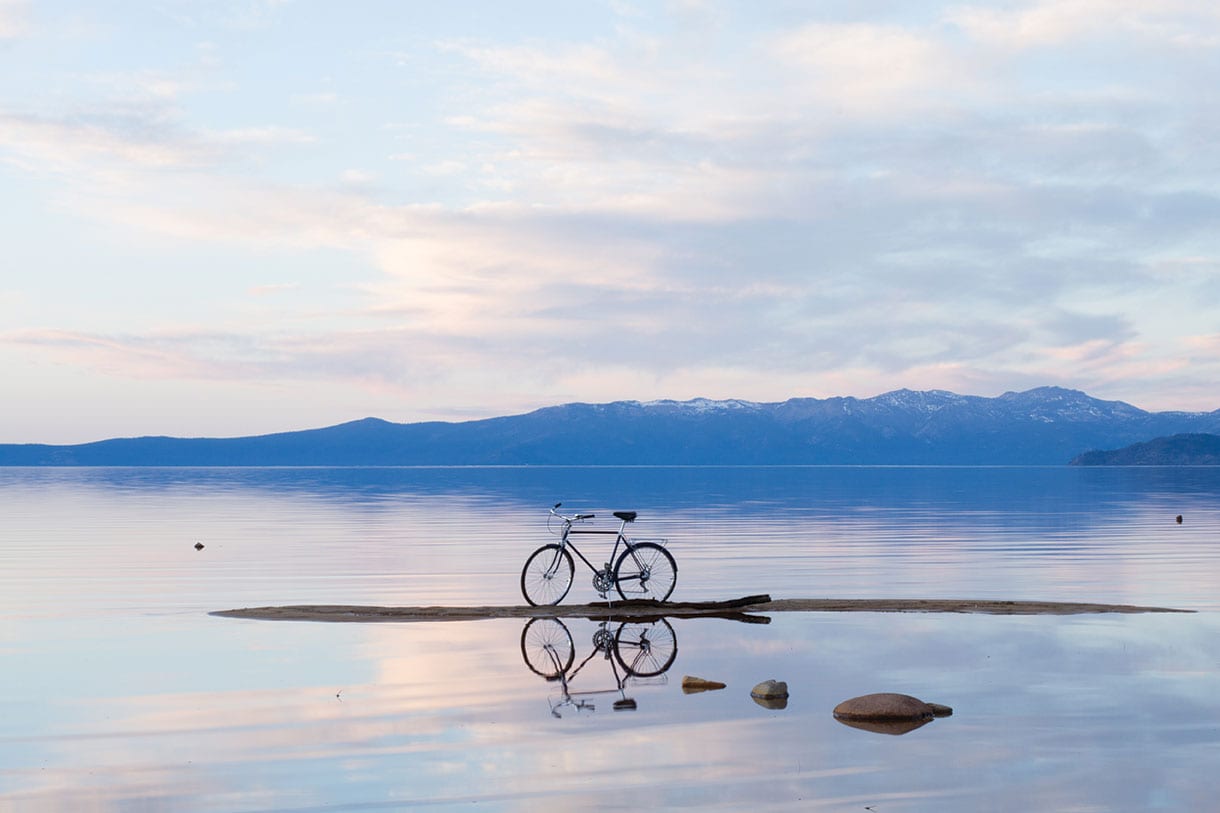 26 Apr The Fountain of Youth is a Lake

Written by Dylan Silver Posted at 03:30h in Best of Tahoe 2018, My Sierra, Outdoors 0 Comments
Share

The waves crashed over the edge of my raft, rolling it hard onto its side. The wind howled across The Lake. Whitecaps foamed over the surface. The chilly water seemed alive and threatened to tip my yellow and blue one-person inflatable. I laughed and pulled hard on the plastic oars, continuing my expedition along the shore of Nevada Beach. After all, an adventurer would never give up.

Tahoe is a lake for the imagination. As a boy, I used the shoreline as a canvas for my whimsical adventures to unexplored worlds. I’d drop into the water with a heavy stone and hold my breath on the bottom as one of Jacques Cousteau’s compatriots. I rowed my way along wavy beaches as Thor Heyerdahl’s first mate on Kon-Tiki. I discovered new coves and spelunked through uncharted caves in the boulders. The author plays in Lake Tahoe as a child, photo courtesy Dylan Silver

These memories are some of the most vivid of my childhood. They bubble up in my consciousness whenever I’m close to The Lake. Even at 32 years old, I want to build forts out of driftwood and play in the sand at the beach. I want to paddle around in my rubber raft again. And I know I’m not the only one who’s drawn into this nostalgic energy that ripples through our big blue bowl. I’ve come to realize something: Lake Tahoe makes those who visit and those who live at its edges feel young.

This idea is not a new one. Mark Twain discussed the impact the area had on his psyche and physical health. He opined on the benefits of the fresh air (the same the angels breathe), and used metaphors like “enchanted mirror” to describe the surface. He mentions forgetting “his troubles and pains” looking up at the starry sky. And, of course, the old reporter spoke outright of Tahoe’s ability to rejuvenate. He also hinted at the boyish adventures he enjoyed during subsequent visits to Lake Tahoe.

“We had many a trip to the lake after that, and had many a hair-breadth escape and blood-curdling adventure which will never be recorded of any history,” he wrote at the end of his famous chapter on Lake Tahoe in Roughing It.

This return to youthfulness, or playfulness, is a common thread that seems to weave through the culture, art and air of the Tahoe Basin. Some residents put off careers to slide down mountains. Grown men and women strip nude and frolic in the summer sun in the teal coves along the East Shore. Celebrities goof around on the golf courses like they are teenagers. Old-timers shovel snow with a liveliness well beyond their years. In some ways, it’s like Lake Tahoe grabs us all and yanks our minds back to when the most important things in our lives were the complexity of our sand castles and the tint of our campfire marshmallows. Or, as John Muir put it:

“The soul of Indian summer is brooding in this blue water, and it enters one’s being as nothing else does.”

Some have even hinted at Lake Tahoe’s ability to bring us back to a state of mind before differences separated us into political parties, Republican versus Democrat, liberal versus conservative. It is, after all, one of the few landmarks where politicians on both sides of the aisle meet face-to-face.

“The human imagination is so encouraged by and nourished by it that Republicans and Democrats actually work together to do good for Tahoe,” California Governor Jerry Brown said at the 2017 Tahoe Summit.

It’s an odd contrast. Lake Tahoe is an ancient landscape. It’s built of stone that’s as old as the earth. The water moves through the Basin at a glacial pace. What’s left of the old-growth pine is gnarled and twisted. The area’s spell is unexplainable. There are many beautiful places, but not all of them cut through the layers we plaster on as we age like the Lake of the Sky. Maybe that’s part of its magic. It stays the same while we all grow older.

I have to wonder, though: Will the changes that Lake Tahoe is facing, like development and clarity loss, also affect its Fountain of Youth spirit? Will the water always hold its rejuvenating alchemy? Will camping on the shore always have the power Twain purported could “restore an Egyptian mummy to its pristine vigor?” I suppose time is the only way to tell. And, perhaps, the only test is to take on a few waves in my rubber raft.

Dylan Silver is a freelance writer and photographer and the founder of Tahoe Clarity, a fine art photography business that sells prints of his underwater photography of Lake Tahoe. Find more of his work at dylansilver.com and tahoeclarity.com.