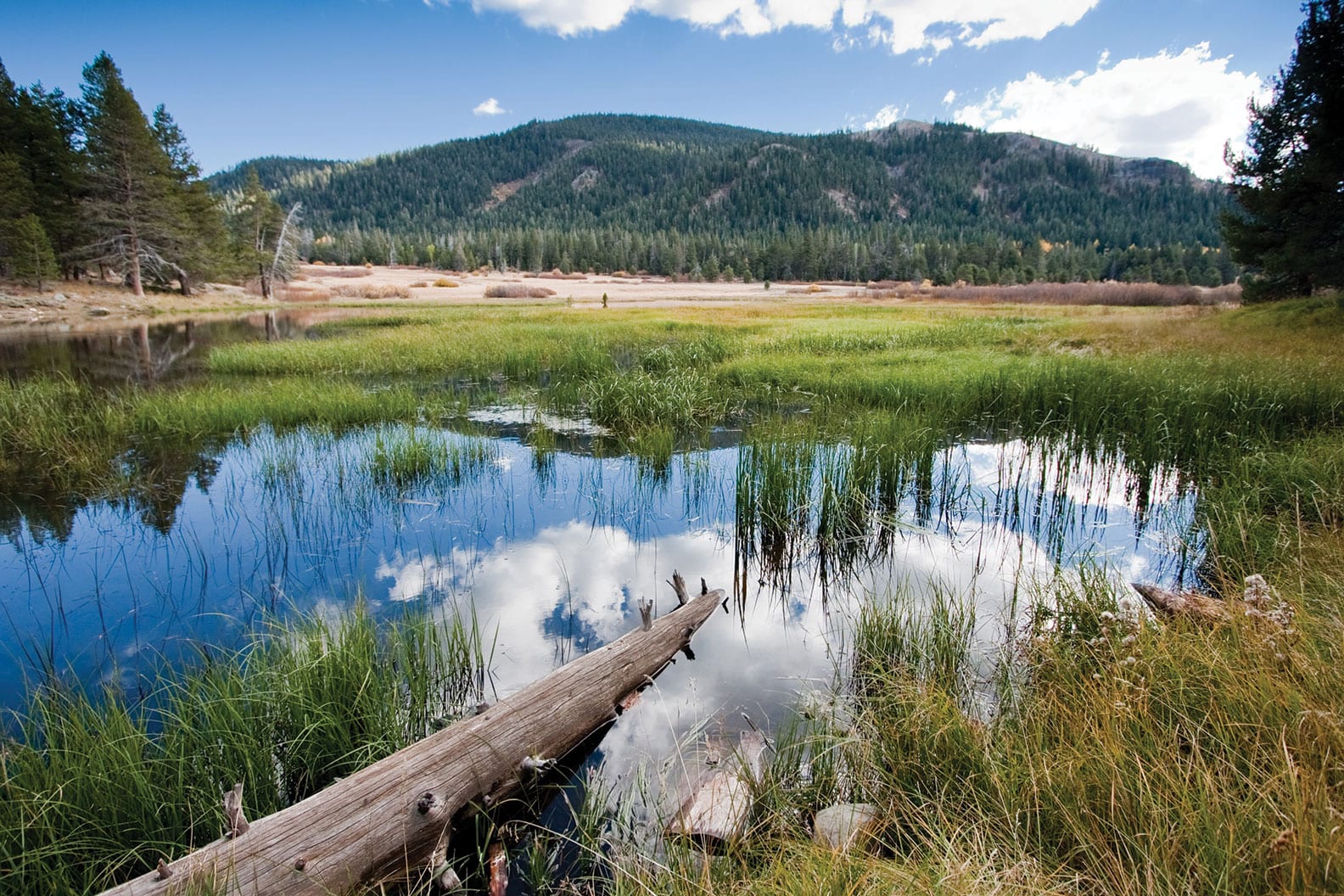 After restoration efforts by the Truckee River Watershed Council, Perazzo Meadows north of Tahoe is now a thriving wetland once again, photo by Matthew Grimm

in Best of Tahoe 2018 | Environment | Written by Vangela Wightman

Local nonprofit has enjoyed much success since forming in 1996

Jim Plehn spent transformative childhood summers on the edge of the Truckee River at Bear Rock, his family’s riverfront cabin just a few miles west of Tahoe City. After moving to Bear Rock full time in the late 1960s, Plehn watched the nonstop summertime flow of river revelers float past his house on rafts, kayaks and the occasional giant rubber duck. Through the 1970s and ’80s, his alarm grew as erosion and sediment damaged the microenvironment he had spent his life exploring and admiring.

As Plehn considered options to stifle the destabilizing impacts along his specific stretch of riverfront, he and friend Sara Trebilcock—an original owner of Truckee’s Villager Nursery—landed on the notion of planting a “green fence” of willows and other water-loving, soil-stabilizing plants.

Functioning as both a trespassing deterrent and a riverbank stabilizer, the success of Plehn’s green fence inspired him to share this idea with another friend, Alice Berg, a U.S. Forest Service employee.

Standing in Plehn’s yard, the trio realized that the “green fence” approach could be implemented along other compromised stretches of the river via a well-organized and environmentally empathetic body of volunteers. Plehn recognized that while people were the problem, they were also the solution.

“One thing led to another and they created this volunteer event called Truckee River Day,” says Brenda Gilbert, development director at the Truckee River Watershed Council. “They hoped maybe 75 people would show up, but 300 volunteers came ready to help.”

The outpouring of community support confirmed that Plehn, Berg and Trebilcock were far from alone in their desire to improve and protect the watershed.

The Truckee River Watershed Council was born from the success of that inaugural volunteer day in 1996. The sole focus of the nonprofit is to return the watershed to a state of resiliency for generations to come, one stream, meadow and project at a time. Encapsulated under the recently adopted moniker “Foriver,” the Watershed Council has become a well-connected entity, working with multiple government and environmental organizations, and a lengthy list of partners, and enjoying notable successes over the course of 23 years.

Volunteerism for Truckee River Day, the Watershed Council’s most well-known public event, continues to thrive with about 400 annual participants. Groups meet up with project leaders not only on the banks of the Truckee River, but along tributary streams and creeks throughout the watershed for a day of erosion control work, water sampling, weed pulling and tree planting.

Traveling 121 miles and dropping 2,440 vertical feet from its source at Lake Tahoe to the mouth of Pyramid Lake, the Truckee River is a waterway curiosity. As an endorheic basin, it is part of a closed system with no outflow to the ocean. It also runs primarily north and east, a bit peculiar for a river west of the Continental Divide.

While the entire Truckee River watershed comprises over 3,000 square miles, the Watershed Council focuses on the middle watershed, an area of 435 square miles between the source at Lake Tahoe and the California–Nevada state line. Within these parameters, seven large bodies of water and 26 major tributaries empty into the river before it leaves the Golden State behind. Recreational activities combined with a century’s worth of sedimentation from damaging and detrimental land-use practices have resulted in the United States Environmental Protection Agency classifying the Truckee River as a polluted waterway.

Working to reverse this designation, seven full-time staff members presently occupy the Watershed Council’s office in downtown Truckee, and countless volunteers participate at various levels throughout the year. Funding is secured through grants and donations to support projects ranging in size from a one-day planting of sugar pines as part of Truckee River Day to large, multi-year undertakings such as the restoration of Perazzo Meadows.

Located 15 miles north of Truckee, Perazzo Meadows endured the disruption of logging and road construction in the late 1800s. But it was the de-watering for grazing in a dairy operation sometime in the early 1900s that transformed the meadow from a thriving wetland to drier meadow habitat with an eroding stream channel. Water from the Little Truckee River and Perazzo Creek were diverted into a single concentrated channel, causing rapid erosion and habitat disruption. Native wetland vegetation, which was historically inundated by water as the river overflowed its banks every year or two, subsequently dried up as the sustaining floods only occurred with large 10-year weather events.

In 2010, with painstakingly careful use of heavy equipment, native soil plugs were installed into the channel, restoring Perazzo Creek and the Little Truckee River to their original routes through the meadow. Eight years later, the results are like driving into a postcard.

“Perazzo Meadows was part of a larger bird study that was done in the Tahoe National Forest and was identified as one of the only meadows where willow flycatcher populations were not declining,” says Gilbert, highlighting one of many successful project outcomes. 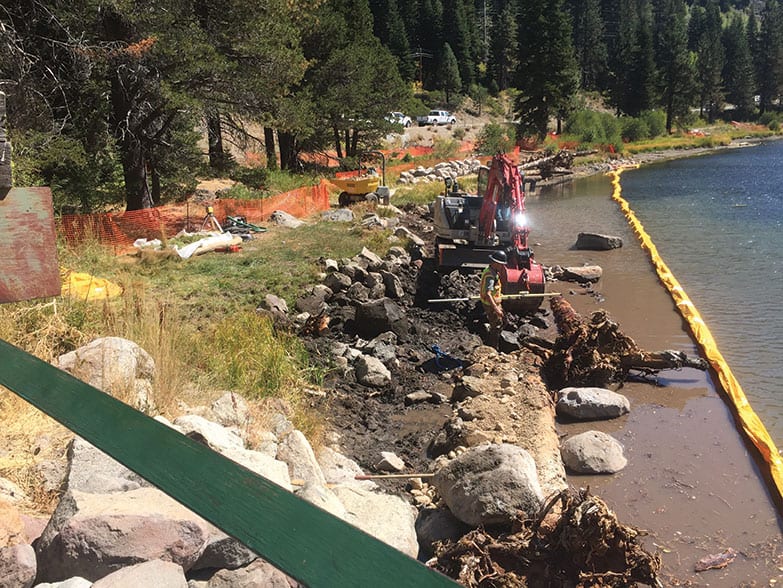 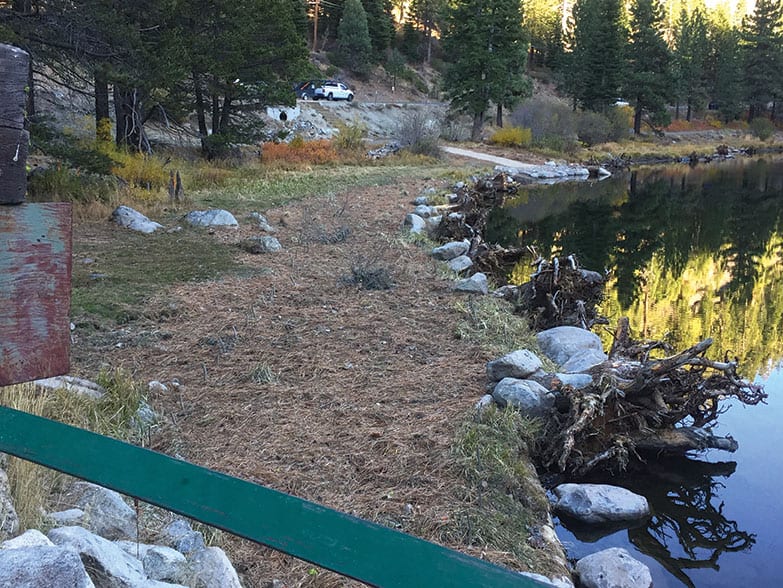 The same stretch of river after construction, photo by Peter Kulchawik

One Project at a Time

A more recent project that not only enjoys greater public visibility but speaks to the origin of the Watershed Council itself is F4M, or the First 4 Miles.

Decades of recreational activity between Tahoe City and River Ranch has taken an undeniable toll on the river environment, undercutting banks, killing vegetation and increasing sediment. In an effort to counter these effects, the Watershed Council worked hand-in-hand with the Forest Service and Tahoe City Public Utility District through the fall of 2016.

Staging areas for recreational pursuits were designed and installed in four locations; 1,200 feet of heavily eroded riverbank was stabilized with logs, root wads and boulders; and 3,000 square feet of meadow plants were re-established along with native fish habitat. Regular users of the bike path and summertime river floaters will not only notice the improvements, but will contribute themselves by using the intended access points along the way, leaving the remaining riverbank to heal and flourish.

Gilbert describes the culture of the Watershed Council as positive, well informed and considerate of community factors. Council staff and leadership focus resources and energy on what can be accomplished relative to a given situation and are unswayed by potential project shortcomings or unachievable ideals.

“We understand that our economy is better supported by a healthy watershed, and we don’t try to work against it; we try to work alongside it,” Gilbert says. “We work from a position of knowledge and science and don’t haphazardly wander around and find things to fix. We’ve done assessments of our watershed, basin by basin. This allows us to identify and prioritize projects and put them in the pipeline, setting them up for an optimal outcome.”

“Fifty projects in 10 years gets us a really long way toward our overarching goal of having a fully functioning, resilient watershed,” says Gilbert.

Work can be seen at the Middle Martis Wetland project along Highway 267 near Northstar; the Truckee Meadows Restoration Project adjacent the Truckee rodeo grounds; and, soon to begin, the McIver Dairy Meadow Restoration, a seasonal wetland that also hosts an informal but popular wintertime sled hill in Truckee’s Gateway neighborhood. 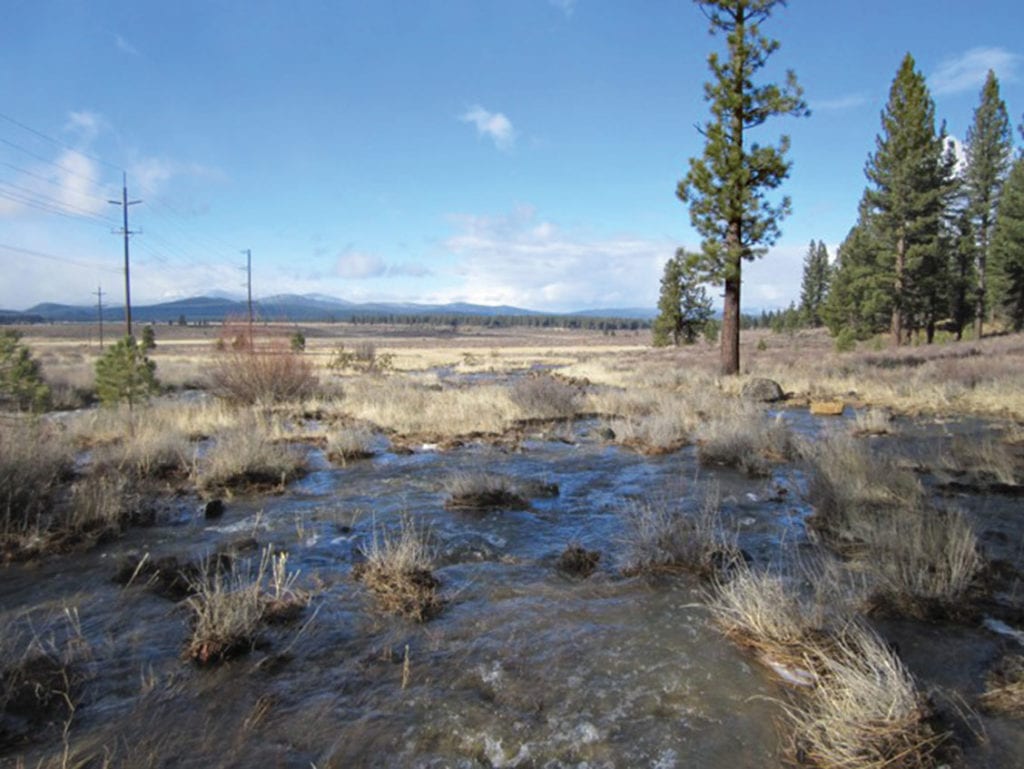 The Middle Martis Wetlands along Highway 267 after restoration, photo by Beth Christman

River Talk presentations are regularly scheduled at the organization’s office to provide a general lowdown on restoration projects, and free property evaluations and landscape assessments are available to homeowners to ensure that the runoff from private parcels is not contributing to water-quality degradation. And, of course, the nonprofit’s cornerstone event, Truckee River Day, is scheduled for October 14.

The piece-by-piece restoration approach of the Truckee River Watershed Council is intended to re-establish healthier microenvironments over time, allowing for enriched habitat, reintroducing a diversity of plant and animal species, and bolstering a watershed more capable of successfully adapting to change.

What does the community at large get out of all this work? One could argue that when the natural environment is functioning at its best, so are the humans inhabiting it. As Calvin Coolidge wrote, “Remember that nature is your great restorer.” The work of the Watershed Council is actively and positively enhancing the symbiotic relationship between nature and man, and with each successful project and rejuvenated landscape, it demonstrates how we must be nature’s great restorer as well.