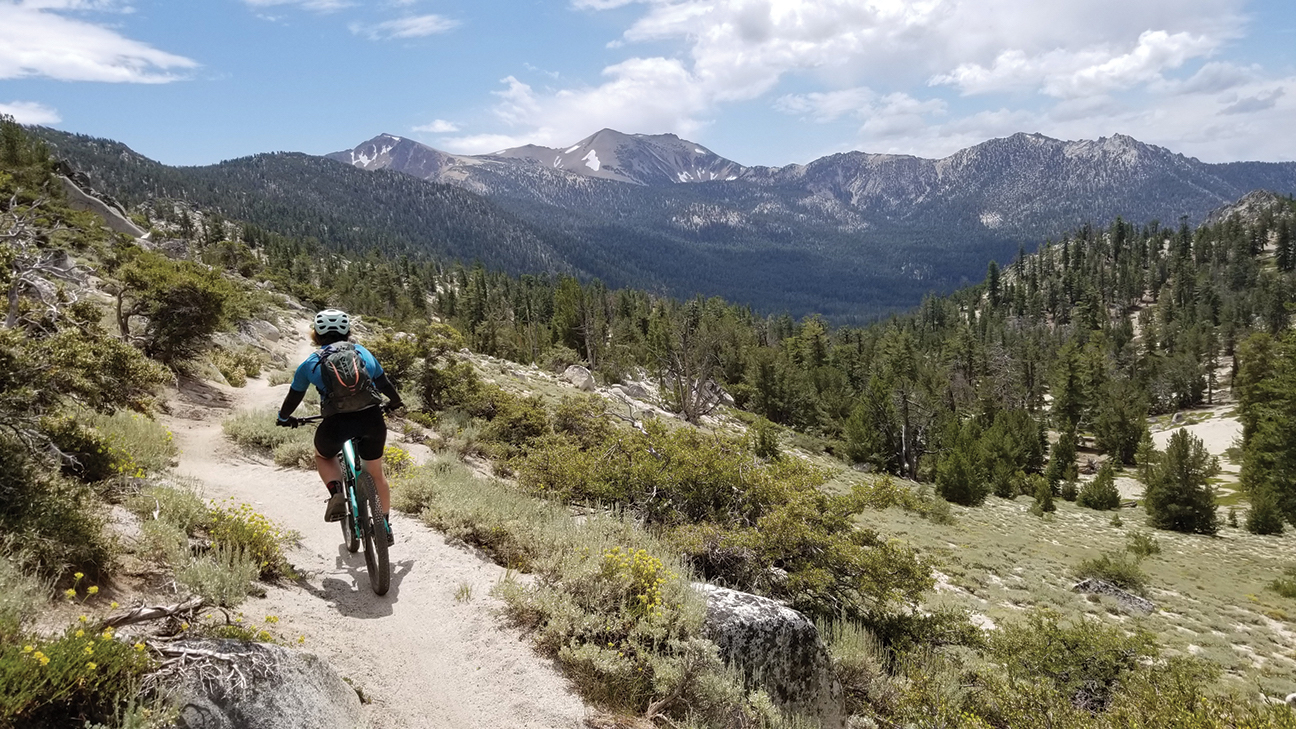 From Promotion to Preservation

in Best of Tahoe 2020 | Outdoors | Written by Tim Hauserman

As Tahoe’s most trodden trail continues to gain popularity, the Tahoe Rim Trail Association has ramped up efforts to protect it from the masses 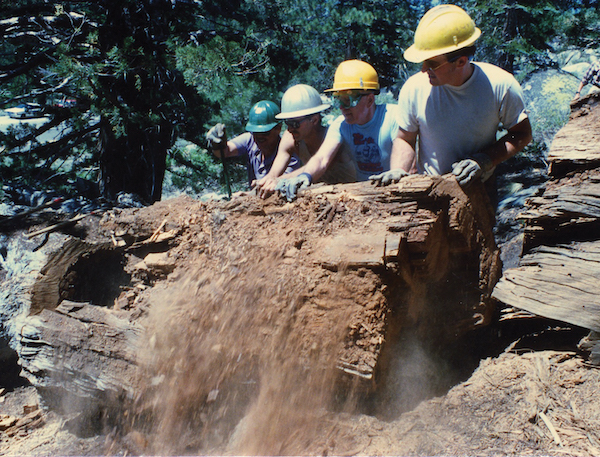 A large log is removed from the trail during construction, photo courtesy Tahoe Rim Trail Association

Since Lake Tahoe’s circumnavigating trail officially opened in 2001—after 17 years of work and more than 200,000 volunteer hours—the Tahoe Rim Trail Association has always served as its biggest promoter. But times have changed.

With close to a half-million users annually, the Tahoe Rim Trail is facing the same dilemma as other prime outdoor recreational resources in the Tahoe region: There are too many people in too little space. In response, the trail’s longtime nonprofit steward has shifted its focus from promotion to maintenance and educating people on how not to damage it.

“It’s a shift many years in the making,” says Morgan Steel, executive director of the Tahoe Rim Trail Association (TRTA). “We were focused on getting [the trail] completed; now the focus is on, how do we educate people and have a place to park for them when they reach the trail?” 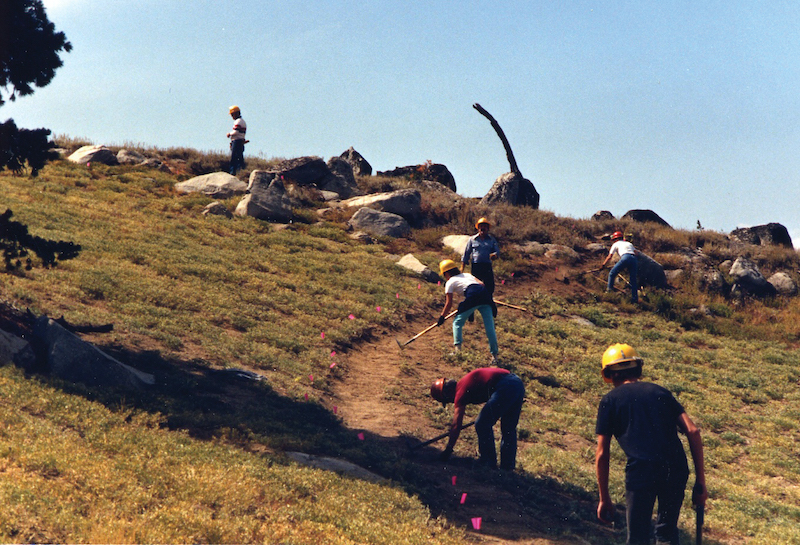 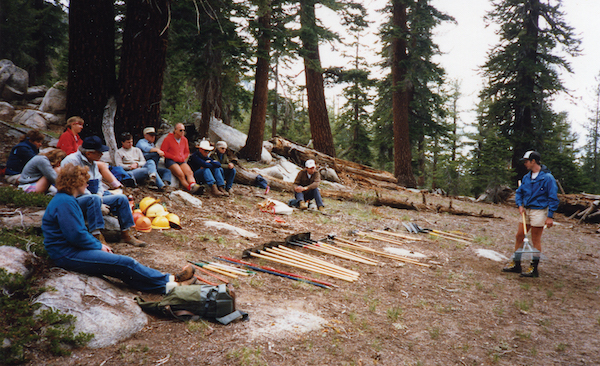 I began hiking the Tahoe Rim Trail, commonly known as the TRT, when much of it was still under construction in the late 1980s. In 1999 I became the 11th member of what was then called the Tahoe Rim Trail 150 Mile Club, now the 165 Mile Club (builders didn’t know exactly how long it would be until completed). Because the loop wasn’t fully built, I followed tentative trail markings and guesstimates to complete a few of the sections. Since then, I have thru-hiked the trail three times.

The first time, in 2007, I camped by myself for 13 nights without any other campers nearby, with the exception of one night in the always-busy Desolation Wilderness. I remember camping at the Marlette Campground above the East Shore on day five. It’s the only place where camping is allowed on a 23-mile section of trail, and I had the campground to myself on a weekend in July.

This past year, I arrived at the Marlette Campground on a midweek day in August and almost every spot was taken, and it was still early afternoon. Before dark over a dozen people had crammed into this small, dusty campground, and most of them were planning on hiking the entire trail. I saw more TRT thru-hikers that night than I saw during the entire two weeks of my first trip around the trail. 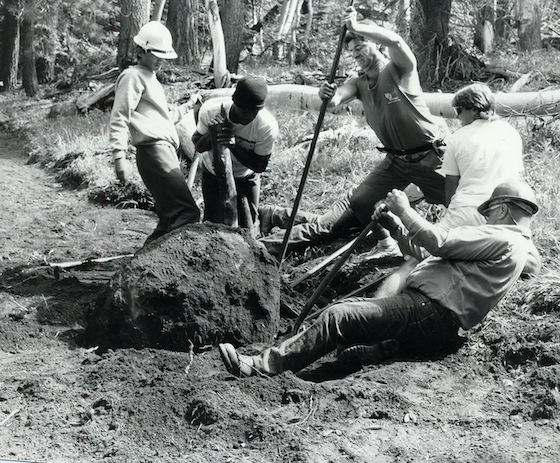 From its inception in 1998, the Tahoe Rim Trail 165 Mile Club grew to around 750 members in the first 10 years. A little over a decade later, membership now stands at around 2,500.

“The thru-hiking culture has kicked in,” says Chris Binder, deputy director at the TRTA. “A part of that culture is an emphasis on seeing it through until the bitter end and not giving up.”

The trail’s increase in popularity can be attributed to traditional media exposure, social media and, because it shares 50 miles with the Pacific Crest Trail (PCT), the “Wild” effect.

The incredible popularity of the 2012 book Wild by Cheryl Strayed and the subsequent movie, which tells the tale of a woman discovering herself on the Pacific Crest Trail, led to a dramatic increase in PCT traffic, and thus TRT traffic as well. According to Outside magazine, “In 2014, 2,655 long-distance hiking permits were issued by the PCTA (Pacific Crest Trail Association). That number has since skyrocketed to 7,313 permits issued in 2018.”

Another factor behind the increasing number of long-distance hikers on the Tahoe Rim Trail is the fact that, while it is certainly a challenging effort, the trail is a doable two-week hike compared to the six months required to complete the 2,650-mile Pacific Crest Trail. 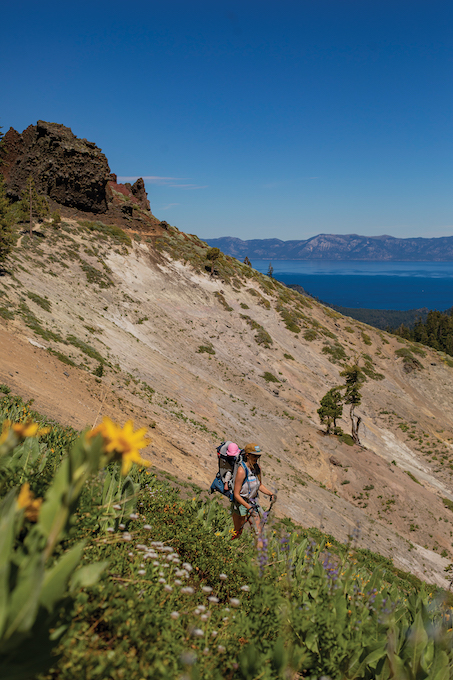 A hiker and her young companion pass wildflowers along the Tahoe Rim Trail at Barker Pass, photo by Ryan Salm

Appealing to the Masses

While the number of thru-hikers is on the rise, most in this group are fairly well informed on how to behave in the wilderness. The real impact on the Tahoe Rim Trail comes from the throngs of short-distance hikers who come to Tahoe for a few days and throw in a hike with the rest of their whirlwind of activities.

Before going any further, I have to admit: For me to whine about the masses of people on the trail is a case of the pot calling the kettle black. Over the past two years I spent a lot of time on the trail updating my official guidebook to the Tahoe Rim Trail, with the fourth edition to be published this year. While the book’s purpose over the past 18 years has been to provide information on how to use the trail safely and sustainably, I also realize that the guidebook encourages people to use the trail who otherwise wouldn’t. Sorry.

In fact, all writing about what a lovely place Tahoe is might be counterproductive, because it does attract more people, which makes the place less attractive to visit. But, like the Tahoe Rim Trail Association, I do hope that some of the folks who have read my stuff are inspired to treat the trail with the respect it deserves.

Now that the cat is out of the bag about the Tahoe Rim Trail’s magnificence, the next step is figure out how to accommodate the abundance of people and still enable users to find a wilderness-like experience.

“We are putting lots of effort on education and having information on our website on how to sustainably recreate,” says Steel, adding that many other local agencies are grappling with the same issue.

The Tahoe Rim Trail Association, which has documented trail use since 2007, dramatically increased their efforts in 2016. Now there are about 30 electronic counters along the trail. According to the TRTA’s 2018 Trail Counter Data Report, while the entire trail has been seeing 5 to 6 percent increases in use per year, there is a big disparity in use between areas. Sections of trail that are close to trailheads and lead to easily reached and popular destinations had considerably more use than other areas.

Galena Falls, for example, which is an easy 5-mile out-and-back to a waterfall from the Mount Rose Trailhead, saw over 1,000 hikers one busy July day in 2018. This is more than 10 times the number of trail users hitting the less-traveled segments on busy days. The average number of users on the trail segments counted over the 2018 summer varied between 22 and 412 per day.

“The busy places are getting even busier,” says Binder. “The management response is to focus on these heavily used areas. Over the past few seasons we’ve been addressing use-related deficiencies at some of the trailheads.”

This led to a new trailhead restroom and additional parking at the Kingsbury North Trailhead, new erosion control steps at the Tahoe City trailhead, and plans for improvements to the Barker Pass and Brockway Summit trailheads. 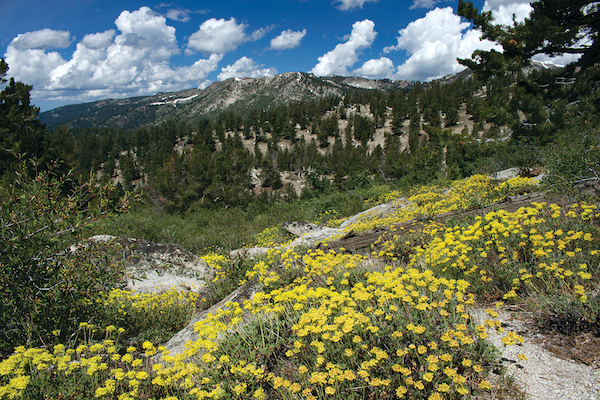 Moving forward, Binder envisions adding loop trails to some of the more popular destinations, such as the 1.5-mile trek from Brockway Summit to Picnic Rock. Few people making that hike or ride continue on the next 18 miles to the Mount Rose Summit trailhead. Instead, they return to their cars at Brockway Summit, passing others heading the opposite direction. This tends to widen the trail, turning it from a more wilderness experience to a park-like feel, which is only enhanced by the numerous encounters.

“We want to manage the experience to allow people to have more solitude,” says Binder.

The increased use over the years has taken its toll on the trail, particularly when portions are still wet from spring runoff. As a result, the need for maintenance has never been greater.

“We no longer have a focus on promoting the trail, but instead promote the association and its focus on preserving access to the trail and the quality of the trail experience,” says Binder. “When people do come, we want them to be educated and responsible. We are trying to fill that role in educating the recreating public so that they can responsibly enjoy the trail.” 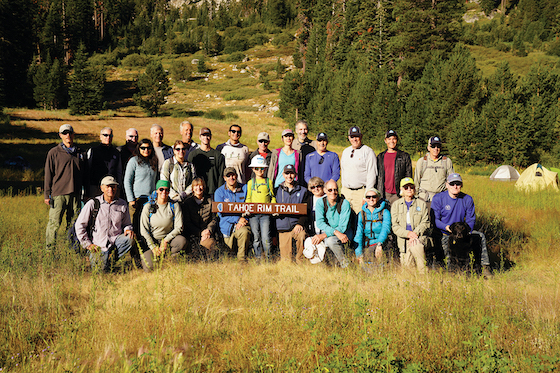 The Tahoe Rim Trail’s popularity is easy to understand: It feels safe and well-marked compared to many other trails; there are numerous locations for resupply; mountain bikes are more prevalent than ever; and, while the trail can be challenging for many bikers, strong riders love it.

“We are trying to find that balance so all of us can use it and enjoy. We want to teach the kids who are going to be stewards how to care for it,” says Roberta Martinoni, a TRTA board member.

Binder says it’s a tough balance. The TRT and other trails bring much to the Tahoe community both for the residents and economic development. But, adds Binder, “It’s the same problem we have in Emerald Bay. We are drawing so many people to the area that places are being loved to death: There are parking problems, overuse problems, maintenance problems. We don’t want to get stuck in traffic. It even affects the way locals now recreate. If it’s a holiday weekend, you don’t try to do that bike ride. You work on Saturday so you can ride without the crowds on Tuesday.”

It’s been said that the first step to solving a problem is to recognize that you have one. In this case, the Tahoe Rim Trail Association understands the problem: They built a beautiful trail that everyone loves. Now, they are trying to figure out how to keep it that way.

Nearly lifelong Tahoe resident Tim Hauserman has explored every nook and cranny of the Tahoe Rim Trail since first completing the 165-mile loop in 1999. His book, Tahoe Rim Trail: The Official Guide for Hikers, Mountain Bikers and Equestrians, originally published in 2002, with the fourth edition debuting this summer.