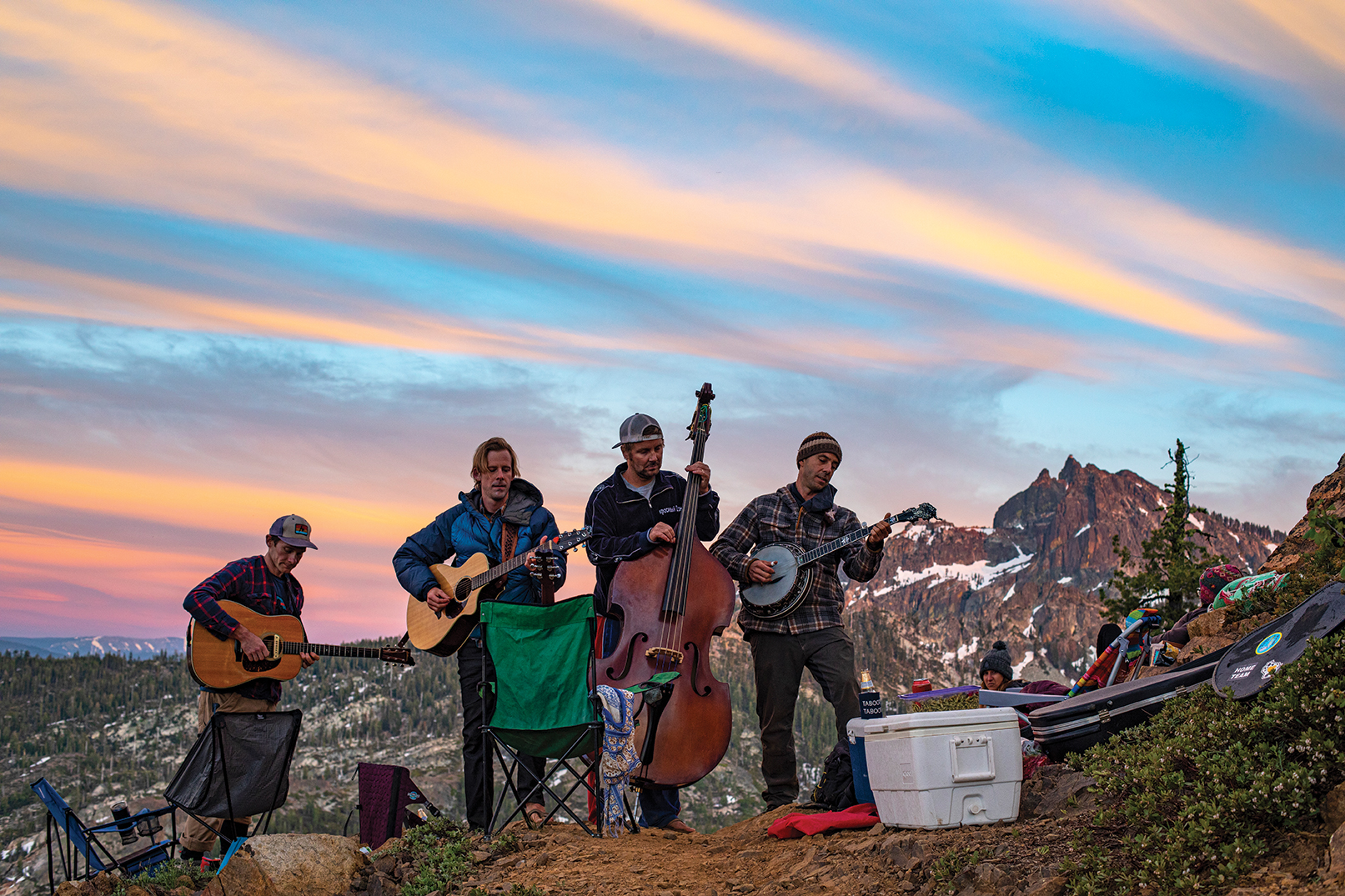 Karmic returns were never our intention setting out on our annual Pacific Crest Trail serenade. After several exhausting hours zig-zagging and slogging up and down steep snow patches, I had to wonder: Was this payback for something done in a past life? 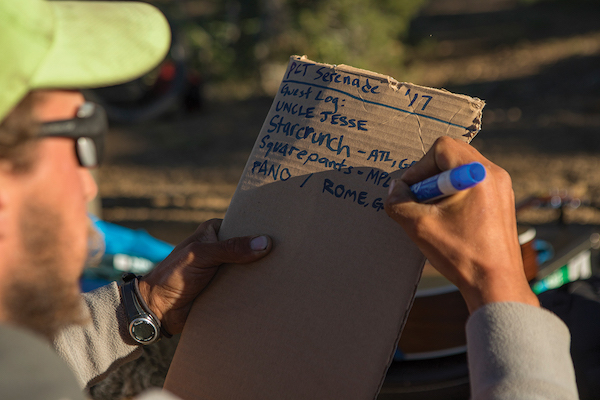 Our intention was to do something nice, hang out with friends and stoke out thru-hikers. So, why were we bushwhacking through dense forest and frozen snow piles on the crest of the Sierra?

In 2016, local music aficionado Dan Hurley and I sought to embark on a walk for a few days in the Sierra. While researching unique places to hike, we came up with an idea: pack light, carry instruments and walk the opposite direction as traffic (north to south) on the Pacific Crest Trail (PCT). Dan and I had traveled extensively around the globe and after trips to South Africa, Brazil and Russia, we came to the conclusion that, above all else, it’s music that makes the world go ’round.

Dan’s job as a music teacher combined with his love for music across genres makes him a virtual jukebox. The combination of his skill set with my knowledge of song lyrics make us a formidable creative duo.

Not only were we going to walk a few days on the PCT, but we were going to take song requests from thru-hikers on their way to Canada. The goal was to give people’s minds and tired feet a few minutes to unwind with the various songs they had stuck in their heads. We wanted to create our own version of “trail magic.” 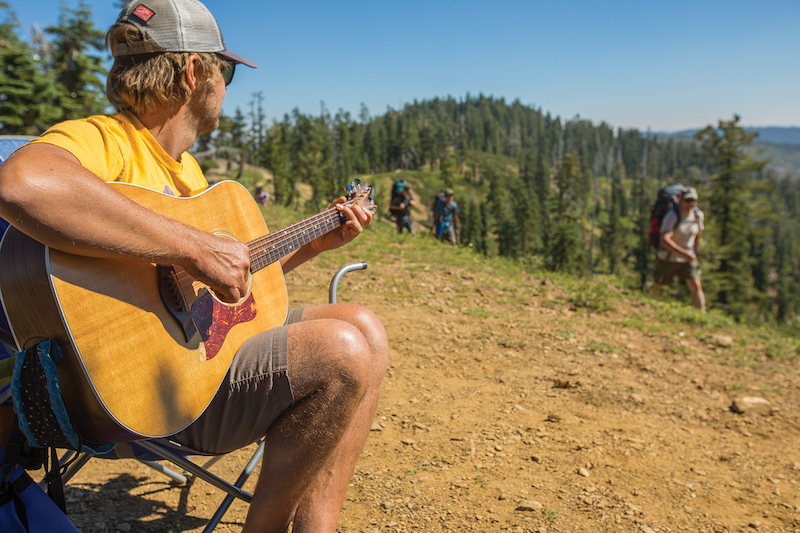 A Tradition is Born

Since the creation of the Appalachian Trail some 90 years ago, the term trail magic has been used when speaking about unexpected acts of generosity on the trail. These acts are intended to heighten the sense and awareness of hikers who have been living in the wilderness for days, weeks or months. The term is now used by thru-hikes worldwide.

This past summer was our fourth installment of the PCT serenade. The first one was a hit. Walking north to south worked wonders. We passed hikers all day long and sang songs on mountain passes, in fields of sagebrush and on volcanic outcroppings. 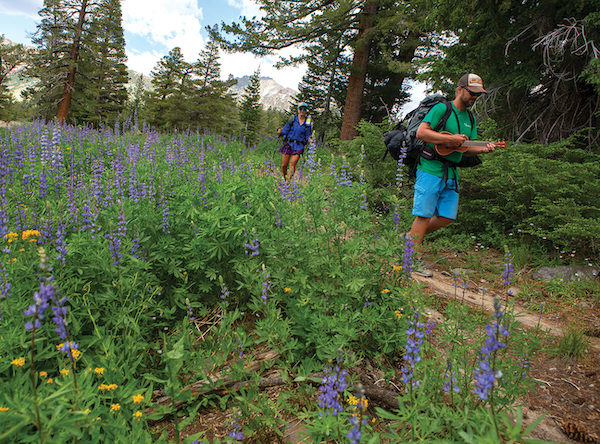 We walked a couple days before turning back to our car. On the way back we met a gal named Katie on a beautiful vista. We played her request, Riptide by Van Joy. Turns out she was having a bad couple of days and after the song finished, a giant smile took over her face. She asked if she could walk the rest of the day with us. We serenaded her with Johnny Cash’s Walk the Line and the Grateful Dead’s Eyes of the World, among many others.

With the aim of keeping it fresh and ever-changing, we decided to switch it up for our second year. We mulled over maps of the trail and found a beautiful car-camping spot above a lake in Plumas County.

Instead of walking the trail, we were going to set up the perfect trail magic station. We found sponsors in Ninkasi Brewing Company and Clif Bar, chilled the beers and fired up the grilled cheese. With instruments in hand, we stood just around a sweeping bend with views of the Sierra Buttes. Thru-hikers rounded the corner and, like a mirage, saw a three-piece band (we added a mandolin player), ice-cold beers and hot food. By sunset, every hiker we came in contact with—13 in total—ended up stopping for the night and camping with us. It turned into a trailside singalong. 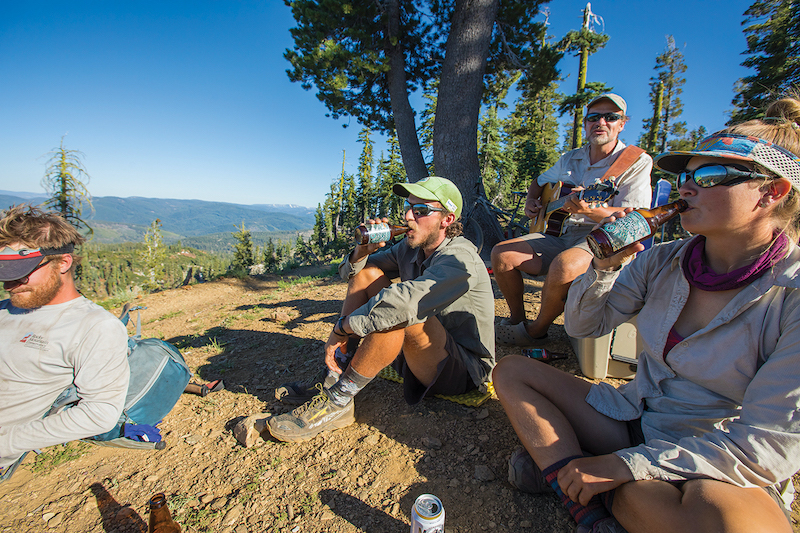 A hiker flips the script, playing a song for the band members

This past summer we were at it again with the hope of evolving even further. The idea was to recreate our perfect base camp and then hit the trail. That way we could bring a full band and also walk the trail. Taking it one step further, we decided we would leave a couple weeks earlier than normal and serenade folks while we walked to the High Sierra Music Festival. 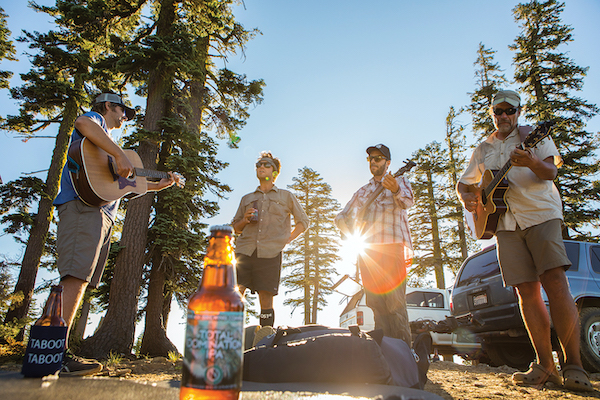 So many songs, so many locations, and the occasional cold beer

Dan and I set a car shuttle on a side road outside of Quincy. As we parked we met a gal walking the trail solo. After a few pleasantries we serenaded her with a laid-back version of the Ramones’ I Wanna Be Sedated before heading out.

Once again, we moved north of the Sierra Buttes in an attempt to find drier trail. The 2019 winter was extremely snowy in the Tahoe region, and it was rumored that many thru-hikers were skipping the Sierra. Approaching our go-to camp spot, we found the road impassable with high snow, forcing us to find another spot. Our crew had multiplied into a full string band with Kurt Beckering, Sean Duerr, Trevor Husted, Dan Hurley and me on a wide variety of instruments consisting of guitar, banjo, harmonica and bass. We had Megan Hurley and Sarah McGuire running the grilled cheese station and set ourselves up in one of the most beautiful locations available.

Kicking back in the cool evening air, we picked tunes, drank beers and ate grilled cheese into the wee hours. Everything was perfect. Except no one walked by. Little did we know, the PCT by Deer Lake had been re-routed, which left us playing tunes to the moon, stars and setting sun. 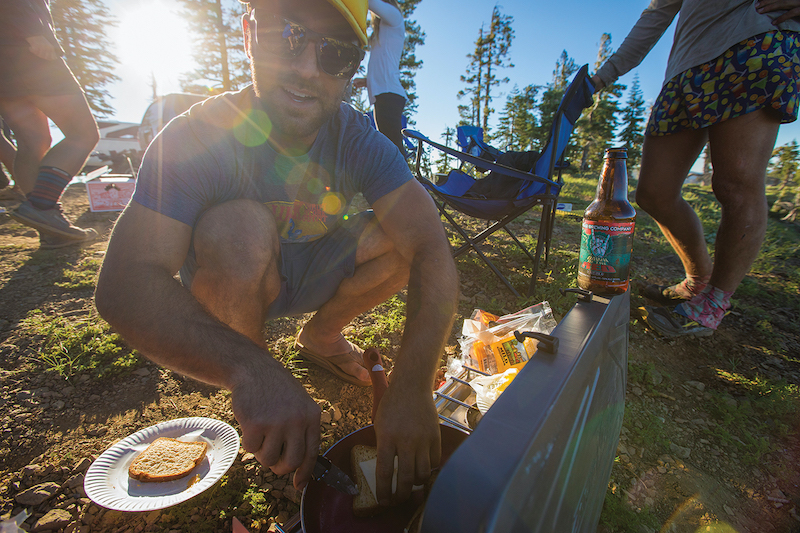 Hiccups on the Trail

At dawn, Dan and I left the others and walked along what we thought was the PCT toward Quincy LaPorte Road.

It started off smooth and dry as we walked along the eastern slope of the ridge. Before long the trail turned west into the shade, where we encountered dense forest and patchy snow. We made sure to mark the spot on an app as we descended into the forest. Without communicating much to one another, we worked our way down a series a switchbacks that became more confusing with every step. Steep snowdrifts made the trail indiscernible.

Though I mentioned that maybe we should stop and play a tune to get us in the mood for what was ahead, I could tell that Dan was seriously questioning the entire mission. Not only was there snow everywhere, but we found ourselves constantly walking up and down steep, snowy tree wells. The trail was gone and we were fully reliant on our app map. Blisters began to form an hour in. As we lugged our instruments without a soul in sight, I knew our mission was in jeopardy.

When we finally popped back into the sunshine, we were worked. We hadn’t walked far. Every hundred yards or so we stopped and questioned whether we should move on. At the pace we were walking, we would clearly run out of food before we made our destination. At first, I was in it for the long haul, but as the hour-hand whizzed by, my optimism started to dwindle.

We stopped for lunch on a saddle west of Mount Elwell. Deep down inside, we both knew we needed an exit strategy. We could hike down to Johnsville and walk the road back to Graeagle. Although doable, it would be a huge undertaking. We were still nowhere close to our car.

In a state of mental limbo, we continued on until we had a clear view of the PCT on a ridge to the north. The trail looked clear. We revised our plan. We would walk the ridge and if the PCT continued on the visible dry trajectory, we would push onward. If it dropped back to a snow-covered aspect, we were done. I could tell Dan was completely over it, and I was not far behind. 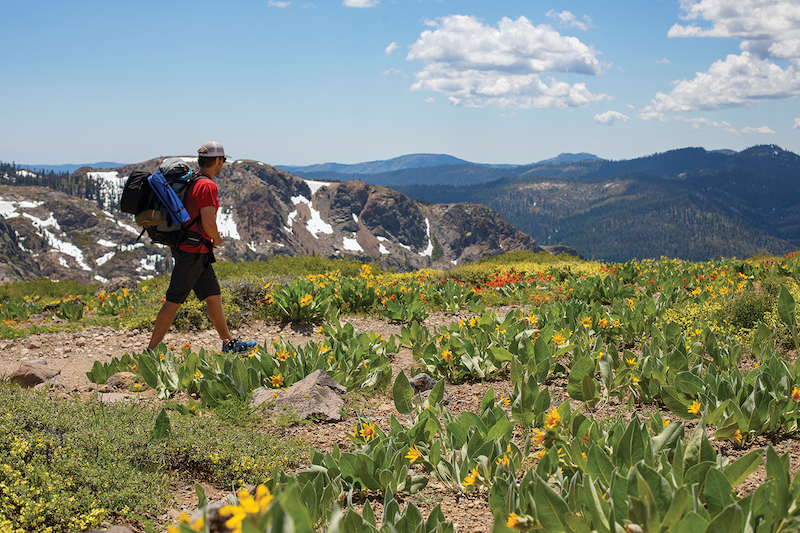 Rounding a knoll, we hit a field of beautiful wildflowers with green rolling hills in the distance. The reds, oranges, yellows and purples immediately ignited our spirits. The sun was bright and we could see a mile of dry trail ahead. Moving quickly for the first time, we were actually enjoying ourselves. The mile flew as we dropped nervously back into the forest. To our shock, the snow had subsided. 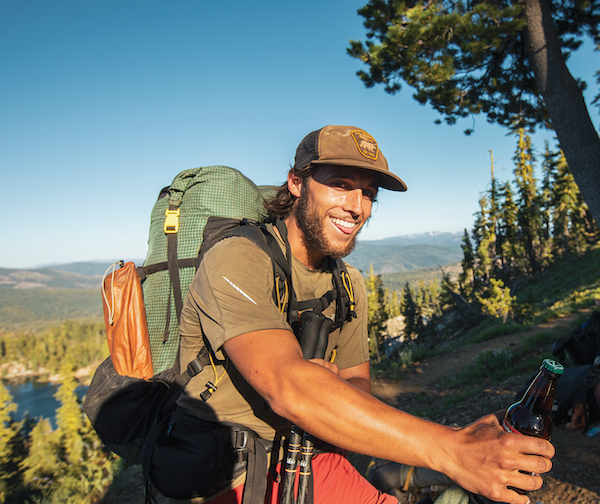 After toying with the idea of walking onward, a hiker succumbs to the temptation of a cold Ninkasi

Five minutes later we heard a rustle ahead and spotted a pair of hikers. We caught up. The couple was from France and, like many hikers this past year, they had skipped the Sierra.

We took our first song request, Walk the Line by Johnny Cash. We were eager to play and put forth a flawless performance.

Moving on, we bumped into a wide variety of hikers from Canada, Germany, Korea and the East Coast. Our set list was flowing as we knew all the requests: Wonderwall by Oasis, Elderly Woman Behind the Counter in a Small Town by Pearl Jam, I Will Follow You Into the Dark by Death Cab For Cutie, and even Brown Stetson by the Inappropriators.

We were in our element as we found an amazing perched campsite with views of beautiful canyons. We cooked dinner, played tunes and I tended to my aching feet.

The next morning we moved slowly but surely to our final destination. Passing a couple of hikers, we played a beautiful version of Stand by Me and were joined by backup vocals from the hikers. Another PCT hiker asked if he could play us one of his songs. We sat on a sunny patch of ground, taking in the moment. 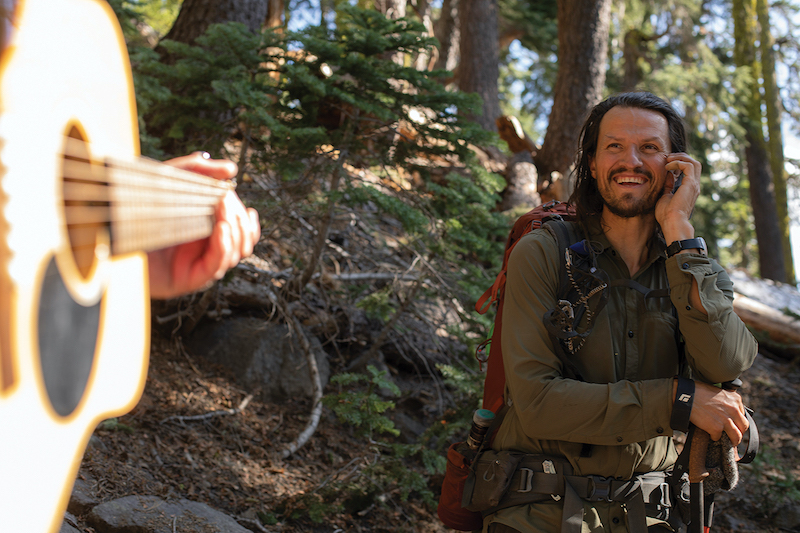 Moving on, the trail went as silent as it was the day before. All we could do was smile as we walked through the dense forests of Plumas County.

Though lost in a karmic debate in the beginning, we slowly figured out that it had nothing to do with karma. It was about planning and perseverance. We made some initial mistakes, but the minute we found the trail at lower elevations, the music and the vibes started flowing.

The objective of long thru-hike trails like the PCT is to connect the human spirit with nature. In years past, we had control over our situation by setting up our basecamp and waiting for hikers to find us. On the snowy flanks of ridgelines, we found ourselves somewhere in the middle of our original intentions and a journey all its own.

As much as we were bringing the “magic” of our PCT serenade to those we came in contact with, it was actually an exchange of our music for their stories. In the end we are all people finding ways to enjoy the outdoors.

Ryan Salm works as a photographer, writer and producer at Lake Tahoe. Over the years he’s picked up the harmonica and guitar and finds joy playing tunes with buddies around the campfire. He and Dan Hurley play in the Tahoe-based quintet known as the Inappropriators along with Kurt Beckering.