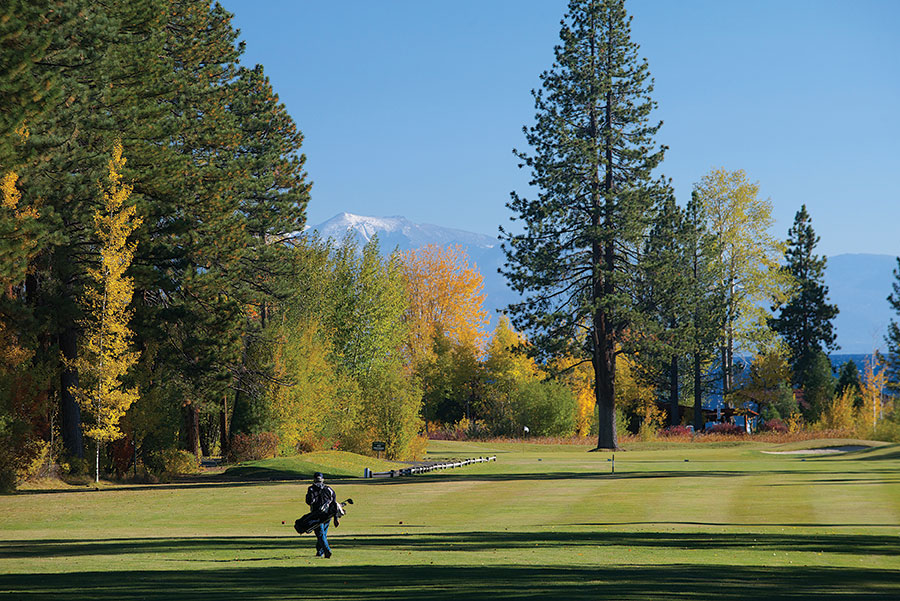 Old Brockway Golf Course pictured during the fall, when the grounds crew begins prepping the grass for the harsh winter ahead, photo courtesy Garry ‘Kiwi’ Moore

in Best of Tahoe 2021 | Outdoors | Written by Jack Wallace

In 2020, in the midst of an especially mild stretch of winter at Lake Tahoe, Old Brockway Golf Course in Kings Beach opened to the public on March 13.

With temperatures hitting 60 and sunshine splashing the course, golfers got a rare shot in March to shed their rust on the nine-hole golf course known for its rich history and early-season openings.

A day later, not a single golfer could be found at Old Brockway. Not because of the coronavirus pandemic—not yet. The golf course, set at just over 6,200 feet in elevation, was empty because it was buried under a thick blanket of snow.

“We opened March 13th, but then we got four-and-a-half feet of snow on the 14th and closed,” says Lane Lewis, owner and operator of Old Brockway.

In other words, if you think maintaining your golf game is difficult in a mountain environment, consider the challenges of maintaining a golf course in a region famous for its extreme weather. On the heels of snow loads and freezing temperatures all winter, followed by wildly variable spring conditions, just getting a course open for golf season is a mountainous task.

Just ask Lewis, who feels the same concern return every year as his team prepares to unveil Old Brockway’s greens, fairways and tees for the season.

“The biggest thing you have to look out for in Tahoe is ice damage on the greens,” Lewis says. “Because we’re all in a temperate environment. That means the fluctuation of temperatures could be 30 degrees in a day.”

If sheets of ice, which Lewis says can be as thick as 4 inches, are covering the greens for more than 60 days straight, it causes
“an anaerobic condition,” cutting off oxygen to the roots of the putting-green grass.

“And then the roots start to decay, and that’s going to start killing the greens,” he adds.

To defend their turf, quite literally, Lewis says the Old Brockway grounds crew composts their greens during a two- to three-week stretch of dry weather in the winter. Specifically, the crew dresses the greens with nitrified humus, a dark, organic material that forms in soil when plant and animal matter decays.

“The nitrification in the humus gives the grass a little tickle in the spring to get it going,” Lewis says.

Prior to that, in the late fall, Old Brockway will fertilize the entire course, which Lewis says helps the fairways start “greening up” a little faster. Too much fertilizer, though, will have the opposite effect, he notes.

“If you put too much nitrogen down there and then you have a heavy snowfall, it stresses the plant out,” Lewis says. “Because it’s trying to grow under the snow with all the nitrogen, but it’s not getting the oxygen either. It’s a delicate balance as far as when to do these things. And it mostly revolves around the climatic conditions in winter and spring.” 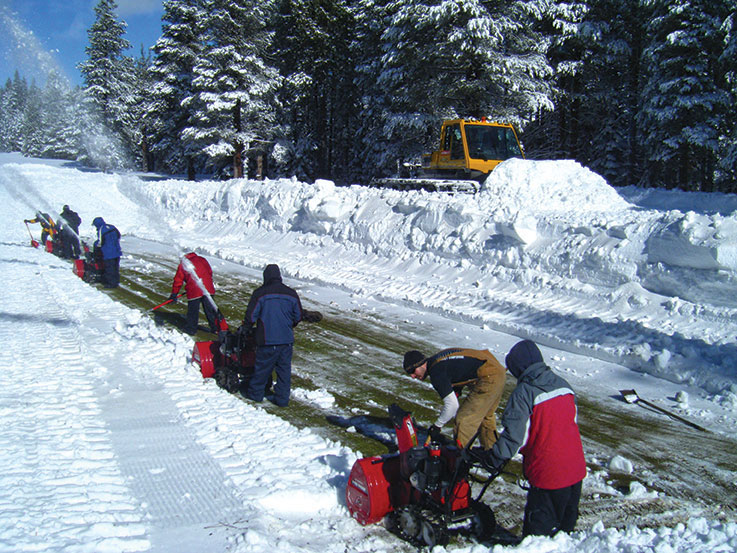 That’s especially true at Tahoe Donner Golf Course in Truckee. Reaching over 6,600 feet in elevation, the course is the highest in Tahoe, which means it receives more snow than any of its competitors in the region. In fact, sometimes the 18-hole championship course gets hit with snow while courses below see rain, says Kevin Kuehne, golf course superintendent with the Tahoe Donner Association.

“We get more snow than everybody and we’re socked in with trees, so we also get less sun,” Kuehne says. “Tahoe Donner is just a slightly different beast.”

Consequently, Kuehne says Tahoe Donner Golf Course is a couple of weeks behind the rest of the courses “down in the valley” when it comes to “growing-degree days”—a way to track heat units that accumulate throughout the year and are necessary for the growth and development of plants and insects.

“What’s tough for us is getting open with acceptable conditions near or the same time everyone else is open,” Kuehne says. “Sometimes when other courses are open, we’ve still got tons of snow up here.”

And massive amounts of snow piled on greens can cause big issues.

Case in point: Two years ago, Tahoe Donner Golf Course had more than 10 feet of snow piled on its greens, Kuehne says. When crews cleared the course with a snowcat, the greens had snow mold.

This, Kuehne says, is why every fall his team starts building a systemic fungicide into the grass while it’s still growing in an effort to avoid the cold-weather fungus. And then he keeps an eye on when the first snowstorm “that will stick” is heading Tahoe’s way.

“A couple of days prior to that is when I go out and put down our final winter application for snow mold,” Kuehne says. “I like doing it a couple days before (the storm), because usually the day before, the wind starts picking up. I do that to eliminate drift and make sure we’re getting a solid application.”

With a mild winter in 2020-21, Kuehne says Tahoe Donner, like Old Brockway, is more concerned with the potential of ice damage heading into the season.

“When you have ice like this year, you’re not battling snow mold because the ground’s frozen, so there’s no fungal activity going on,” Kuehne says.

“That works great in our area,” he adds. “I think a lot of golf courses use that or something similar.”

Notably, Tahoe Donner Golf Course is reopening this year after being closed in 2020 for a $2 million renovation, which included a full replacement of all of its greens and select tee and fairway improvements, according to a Tahoe Donner spokesperson. 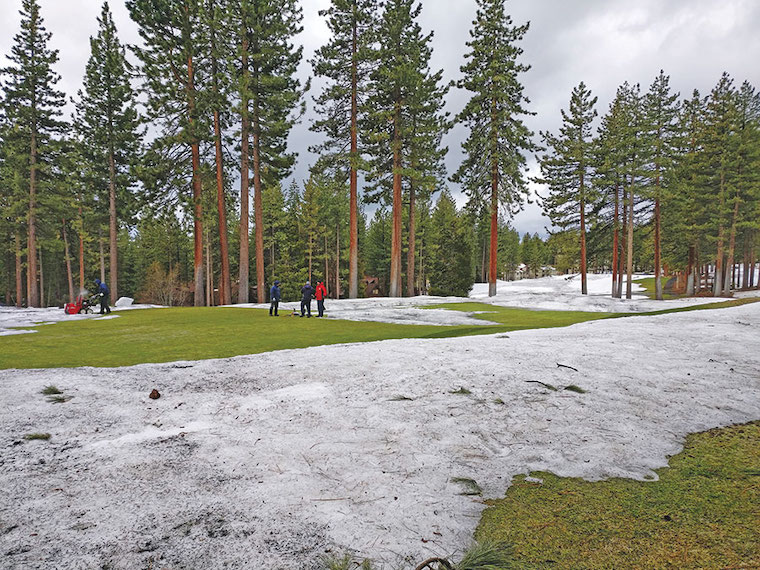 Crews remove snow from the Championship Course in Incline Village while preparing the course for the season, photo courtesy IVGID

‘Mother Nature is in Charge’

Over at the 18-hole Championship Course and Mountain Course in Incline Village, course superintendent Jeff Clouthier says the biggest challenge is dealing with a short growing season, especially when compared to links at lower elevations.

“A lot of work gets crammed into a pretty small period of time,” says Clouthier, noting the growing season lasts an average of 16 weeks at the course. “We’re basically either recovering from winter or preparing for winter almost all year. Some years we could still be recovering from winter when you get into June and July. And then we start preparing for winter in mid-September.” 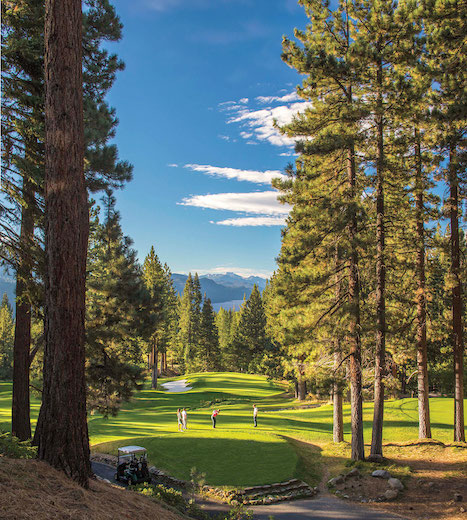 While hard to envision in the heat of summer, the Mountain Course in Incline Village is often buried under a thick blanket of snow during the winter months, photo by Jeff Dow, courtesy IVGID

Further complicating matters, the typical mountain soil “is not the best” at retaining nutrients or providing sufficient space for the roots to grow, says Clouthier, adding, “It’s very challenging because it’s very rocky.”

In their prep for winter, crews at the Championship Course raise the mowing heights in small increments to give the turf a chance to recover from the “summer stress,” Clouthier says. Irrigating the course is also “drastically” dialed back, which helps “harden off the plant,” he adds.

Come mid-October, among other preparations, the Championship Course performs a deep aeration of its greens. The process, Clouthier says, involves punching holes up to 10 inches deep, creating channels that facilitate internal drainage from the melting snow and ice.

Crews also top-dress greens (and fairways and tees as needed) with sand to help protect the crown of the plant from drying out. To that end, Clouthier also makes sure the areas of the course that are most exposed receive spot watering, especially during dry winters.

“One of the most important things we do is prep in the fall,” Clouthier says. “That’s one of the reasons why we close the golf course in the middle of October, even though a lot of times the weather is really nice and people are wondering why we’re closing. The reason is we really need time to prepare and survive the winter.

“And even then, it’s no guarantee, because Mother Nature is in charge.”

Jack Wallace is a Reno-based writer who recently gained a whole new appreciation for those in charge of maintaining Tahoe’s golf courses.