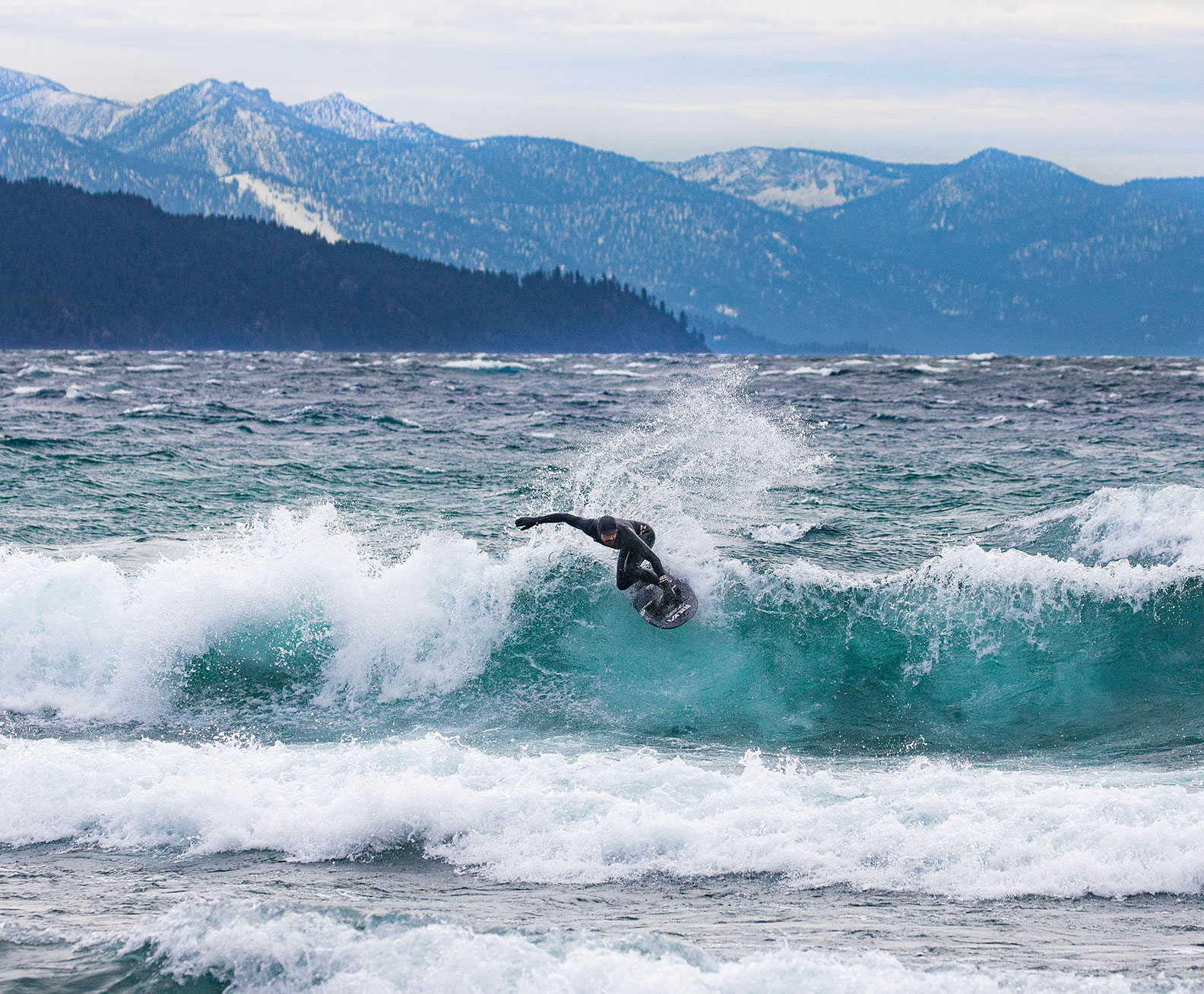 Dylan Graves brings his pro form to Lake Tahoe, smacking the lip on one of the lake’s choicest offerings, photo by Ryan Salm

Take an exposed body of chilly alpine water, add powerful mountain weather and sprinkle in throngs of foolhardy fanatics, and the result is the silly, sublime and slaphappy Tahoe surf scene. 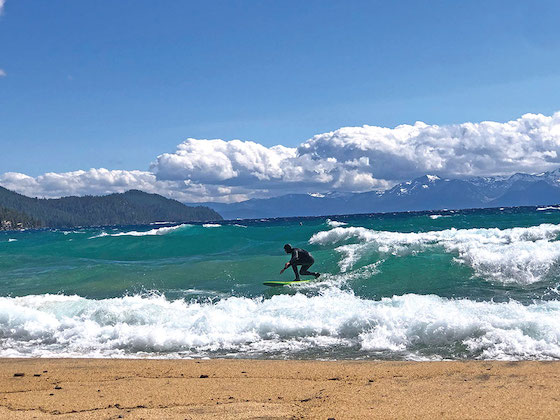 Surf conditions are usually … wonky. It can be bright and blazingly clear, with chunky green chop charging haphazardly toward shore, like a drunken marching band that has lost the rhythm but won’t stop playing. Or it can be gray and stormy, with hammering snow or rain emulsifying with the whitecaps, creating a frothing cauldron of slop, high seas and dark, shifty water.

Whatever the conditions, high winds are highly exciting times at Lake Tahoe. And for surfers, these elements are welcomed, even if the surf is far from perfect.

“Tahoe surfing feels how surfing felt when I first started. Even if the waves are tiny and dribbly, it feels special,” says Ian “Big Dog” Glover, who splits time between Tahoe and the Bay Area, and runs a surf school in San Francisco.

About six years ago, after watching a random surfer get after it on Lake Tahoe, he asked if he could borrow the man’s gear—wetsuit and all. The surfer conceded, and Glover paddled out in the cold borrowed suit, wool socks and a beanie.

“It’s much more memorable than most ocean surfing days, as it feels almost like we are doing something we shouldn’t be able to do, like we are cheating the universe,” says Glover. 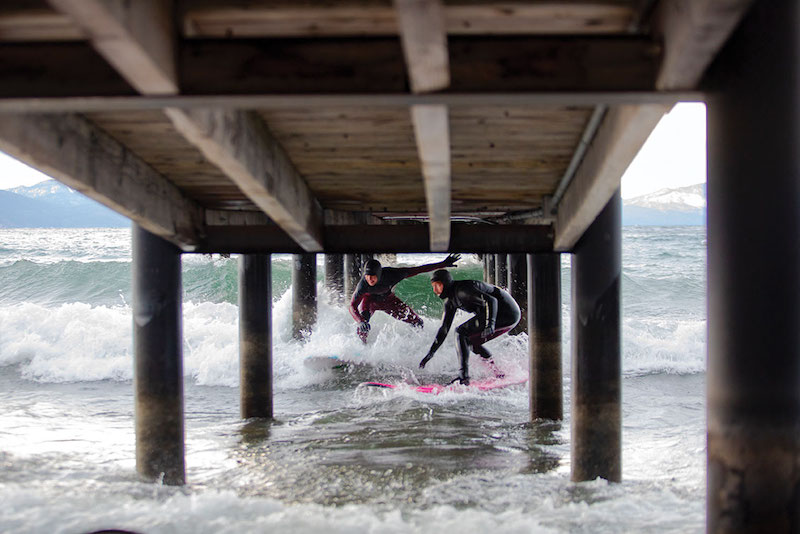 A Tahoe wave is created by wind, just as waves are the world over. High winds create energy in the water, which travels across the lake in the form of swells, eventually breaking when that energy hits the shallower water near the shoreline.

This is the same process that creates waves at Hawaii’s Bonzai Pipeline, to give a logical and practical comparison. A mega difference in Tahoe is that the fetch—the distance over which the swells travel—is minuscule compared to, say, the Pacific Ocean. A low amount of fetch means the swells don’t have time to organize themselves, are close to one another and are rather chaotic.

In other words, they are lackluster waves, when seen objectively through the lens of a surfer’s mind. The wind is always severely onshore by definition (from the water toward the shore is the wrong way for quality), and they are typically a funky shape and disposition.

But who really cares? Not the heaps of adventurous souls at Incline Beach or Sand Harbor when winds are up.

Dylan Graves, a pro surfer and host of the show Weird Waves—in which he travels the world to find wave oddities—came to Tahoe for a few days to film this past winter. He and his crew scored a gem of a day in November 2020, which was one of the biggest days in recent memory.

“Tahoe blew me away,” says Graves. “The wind was there, and it was relentless. It was wave after wave. They never stopped coming. I was pleasantly surprised with how it rode, after having somewhat low expectations. There were certainly some pockets, walls and bowls to find.”

In producing that episode, Graves and friends put down perhaps the most high-performance sessions to date on
Lake Tahoe.

On the opposite end of the performance spectrum, allow the following recollections from two crispy days this past winter to add some perspective to the surfing scene on Lake Tahoe. 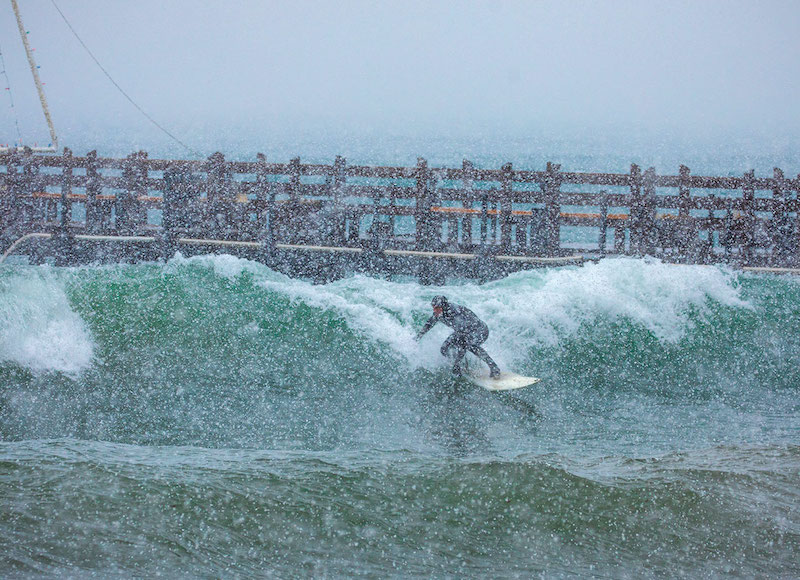 When winds reach a sustained 25 miles per hour or above, somewhere on Tahoe will be rideable. On January 4, 2021, winds were gusting to 65 to 70 miles per hour on the lake, and an astounding 191 miles per hour atop the Pacific Crest (according to Alpine Meadows). Therefore, waves were breaking not just somewhere, but everywhere.

My main surf compadre, Sam Wallace, had already surfed once (with Graves and the Weird Waves crew), so I had to play catch-up. I received the intel and drove to the spot, Incline Village’s Burnt Cedar Beach, while dressed head to toe in neoprene—a practical, if not wholly absurd, thing to do. 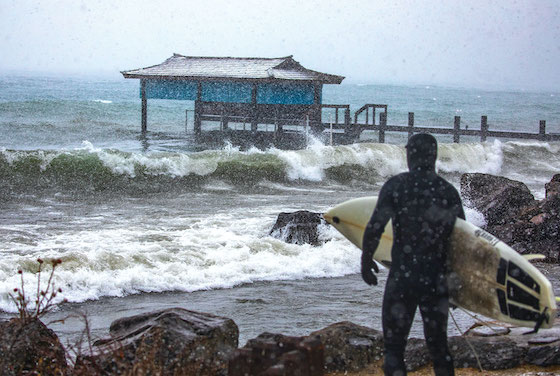 The nastier the weather the better for local surfers, including Scott Gaffney, photo by Ryan Salm

Passing Stateline, spackles of sunlight shot through the clouds, with rain and snow drilling into the mountains. I parked and fumbled to fit my gloves and hoodie before grabbing my board and running to the water. Less than two minutes after dipping in, I flipped my 8-foot “foamie” board (Walmart special) around and paddled into a clean wall. The wave had some shape to it, offering a drop, a short wall and an elongated end section, which I milked far past its logical conclusion to the beach.

Did I just catch the best wave of my life on Lake Tahoe, I thought? Because that electric pulsing in my chest indicates that, yes, I did. Or, maybe I was just in a semi-loopy arctic flow state where everything felt amazing. Either way, I was on an adrenaline high as I paddled over to Sam.

“Yo!” I hollered. He yelled something along the lines of, “It’s breaking in front of that rock … dude, sick, yeah … blah blah … ” I shrugged my shoulders in response and gave a thumbs up (conversation is futile above the howling wind and neoprene hoodies).

I recognized some familiars in the water, like longtime local Scott Gaffney and snowboarder Chris Gallardo, and watched many people catching waves. Burnt Cedar was a new spot to me, and dare I say exotic at that. A rock jetty on the left end of the beach takes in the chop and manicures the madness, turning the energy into shapely, left-breaking waves. Sort of. It’s still trademark chaos. But it’s fantastic.

Tiring of the frenetic paddling, I sat for a moment to observe. Pine trees stood silhouetted against the distant mountains of the South Shore. There were even pockets of calm in between the jack-hammering winds, when all felt chill, cozy and safe—warm even. As the sun lowered, the colors grew, with deep gradients of purple and reds in the sky, and stoic silvers and intense grays in the water. I told myself I was surfing a point break on Lake Tahoe. Life was good.

We surfed until dusk. After exiting the water, I ripped off my wetsuit as fast as possible. This is where the pain cave is entered for Tahoe surfers, who inevitably end up standing in nothing but underwear while sopping wet and exposed to 60-mile-per-hour winds, shivering, cursing. I got the deed done, hopped in my car and blasted the heat as Sam walked over, still in his wetsuit. I then presented what felt like a bulletproof case for a T’s burrito for dinner.

Looking at me with a shivering purple face and a mad look in his bloodshot eyes, he proceeded to tell me that the crew was thinking about checking another beach, and that I should get back in the water for a third time. Sam has caught the surf bug something awful, I thought to myself. I considered staging an intervention, to carefully suggest that he had lost his friggin’ mind. But they didn’t find any surf worth shivering for, and (thankfully) called it.

The burritos were transcendental. 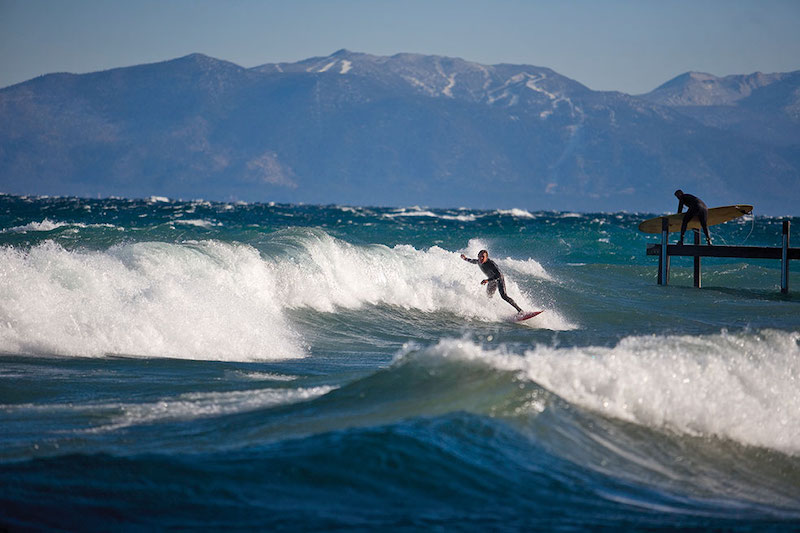 Surfing the West Shore is a rare treat. For this to happen, a mighty east wind, or “diablo wind,” must kick up, which is what we got on January 19.

East winds wreak havoc across the Golden State. They slaughter the snowpack in the Sierra by cutting against the grain of the prevailing southwest winds, creating frozen snot snow where there was once wind buff.

As if that isn’t enough, they take the frigid experience that is winter lake surfing to temporary facial paralysis levels. These brutal winds come from the Great Basin and bring that crispy, dry desert air right to the Tahoe Basin. A subfreezing east wind can cut through a wetsuit like a hot blade through butter.

The waves created by east winds, though, are on the high spectrum of Tahoe Surf Standards (TSS).

I headed to Tahoma, where chest-high peaks were on the menu. The waves on this day were more of a wedge style—that is, more like a triangle than a wall, as their energy condensed into a smaller space. This rarity is welcomed.

A chandelier of icicles ran the length of a nearby pier, dipping into the water and refracting a kaleidoscopic of colors off the frozen tentacles with each passing spray. I paddled toward the pier, lured by the siren song of this psychedelic light show, and tried to catch a few. While sitting in the water, I noticed that, despite being thrashed by the elements for hours on end, the lake always retains its crystalline nature.

A couple dozen people were in the water, with many more watching. Tahoe’s surf culture is bizarre in that its surfers—a group know to be somewhat aggro elsewhere—are really chill. In addition, it involves athletic Tahoe people who normally excel at outdoor sports performing very averagely. There were many bails and people washed up on the beach with exhausted, overwhelmed and joyful looks on their faces.

I spotted TRPA Buoy LX94 bobbing in the rough and found it had a nice ice-encrusted handle to hold onto, which prevented me from being blown to smithereens. I often relish the therapeutic effects of brisk water on tired bones and ligaments, but on this day, I felt my threshold being overtaken. I lost feeling in one foot and then the other, and then other unnamed regions.

Like Burnt Cedar Beach, I saw many familiar faces in the water: skier friends, neighbors and others I had no idea gave a hoot about surfing. With any sport in the outdoors, one wonders about overcrowding (I, for one, am admittedly not helping this) and the loss of something unique. But it seems difficult—maybe laughable—that an angry and localized surf crowd could become a thing here.

The throbbing cold finally did me in after about 35 minutes. I had no shame in retreating to shore, driving home in my wetsuit and then showering until the hot water ran low.

As I recovered, I tipped my hat to the burlier souls still in the water. I then headed back to the same beach to spectate. Sam was out there, catching many lefts to the beach as I took cellphone videos.

Then, my inner explorer sputtered to life as I pondered the yet-unexplored waves of the lake. I drove down the road and was soon alone. Parking at an undisclosed location, I walked through a forest of creaky, swaying pines to an expanse of shoreline. Maybe, I thought, in a secluded cove or below a steep cliff, I could unearth the next extremely mediocre, kind of crappy, but wildly fun Lake Tahoe surf spot.

Dave Zook, a lifelong happily average surfer, admits to writing part of this article while wearing a wetsuit at his desk, waiting to be picked up to go surfing on the lake.