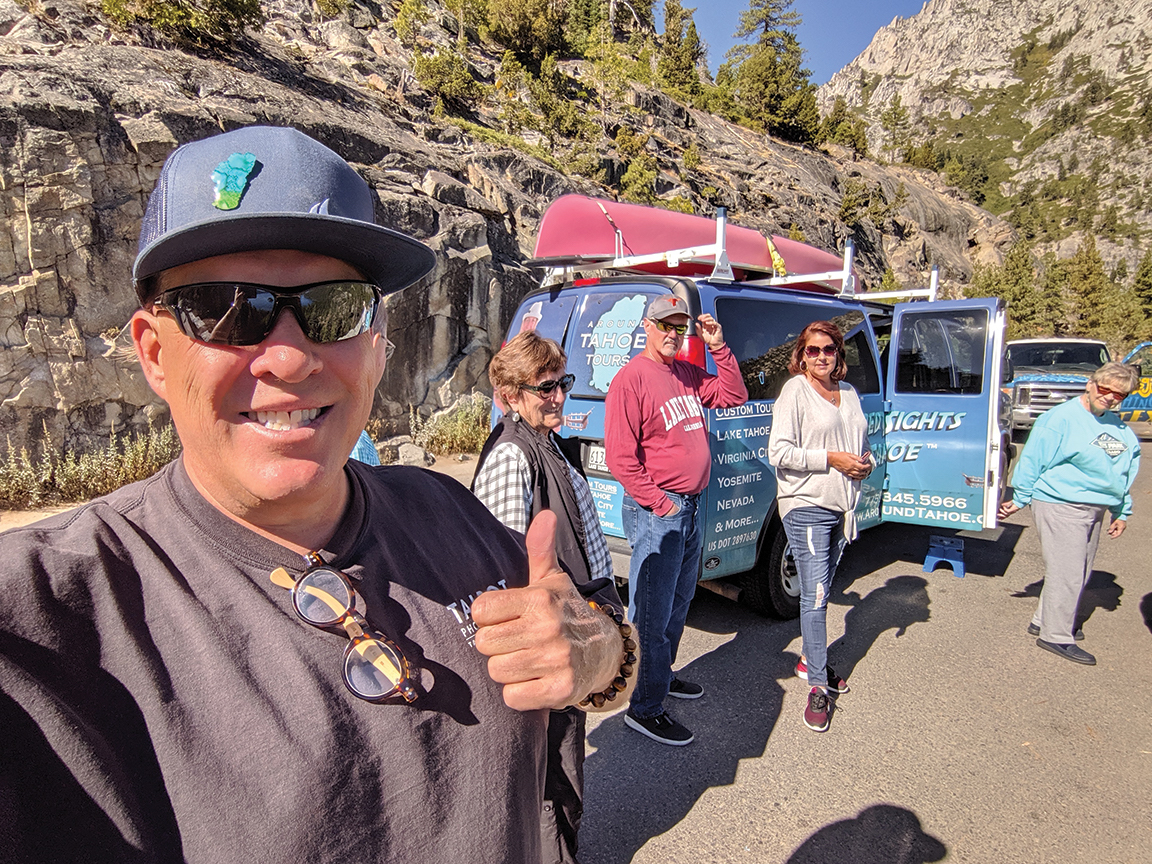 In the Business of Brotherhood

It is impossible to say, at least with any sort of real precision, how many times the Talbot brothers have been around
Lake Tahoe.

In the nearly 45 years he’s called the area home, Chris Talbot has spent countless hours photographing the lake, documenting weddings, funerals, resorts and real estate. As co-owner of Around Tahoe Tours, a sightseeing company he runs with his brother, Darin, he’s also driven the six-hour “Around Tahoe” route at least a few hundred times, relating local facts and stories to his customers with a convivial flair all his own. 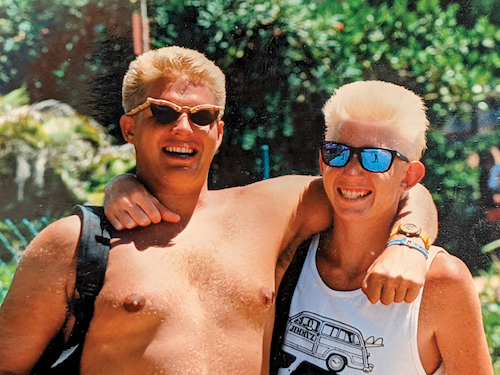 Chris (left) and Darin Talbot, pictured vacationing in Maui in the early 1980s, are nearly lifelong Tahoe locals who started a guiding business around the lake in 2016

Over the decades, he’s watched the Lake Tahoe area transform, with private golf clubs like Lahontan, Schaffer’s Mill and Martis Camp springing up where once there were none.

“I shot everything in Martis Valley before it was there,” says Chris, whose photography adorns the walls of numerous businesses around the lake. “I walked all those properties with my dogs and a tripod and a camera, so I’ve seen the lake change. I’ve seen it all happen.”

He shares this memory while sitting in his Incline Village shop, though calling the space a shop feels a little reductive. Chris refers to it, with equal parts affection and reluctance, as “the museum.”

Inside, what is for sale mingles indiscriminately with what is priceless. There is a postcard display in the entryway and Tahoe-themed T-shirts hanging from garment racks. Newspaper clippings and old family photographs dot the walls. The “sacred stuff,” as Chris calls it, hangs on the upper portion of the wall behind the checkout counter: namely, his professional camera gear and Darin’s guitar.

This isn’t to say that the shop is disorganized. If anything, the compact office suite reflects the many ways in which the brothers’ personal passions and entrepreneurial pursuits have become inextricably linked over the course of their lifetimes.

And while the Talbots are coming off a dismal year, with pandemic restrictions effectively grounding Around Tahoe Tours in 2020, business is now booming with customers eager to take in the sights and stories of Lake Tahoe. As Chris and Darin will confidently attest, no one is better suited to deliver such an experience. 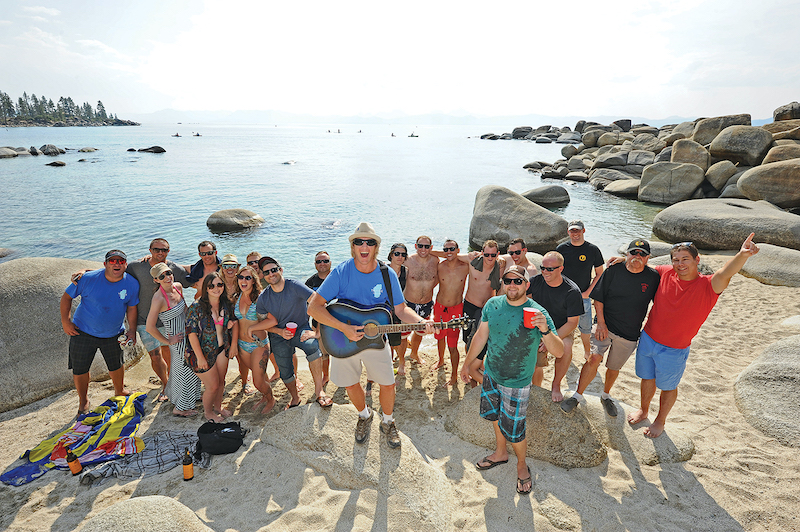 Darin Talbot, aka Mr. Tahoe, entertains a large group of customers in what the brothers call Caribbean Bay, just north of Sand Harbor

Darin, the younger of the Talbot brothers, at 49, is, first and foremost, a musician. He’s written and recorded several albums about Lake Tahoe. In fact, the first iteration of the “Around Tahoe” tour was a musical experience and Darin’s brainchild.

The CD, aptly titled Around Tahoe: The Ultimate Tour Guide for Driving Around the World’s Most Beautiful Lake, included dozens of Darin’s original songs along with narrative interludes about particular landmarks and hidden histories. It was this combination of Darin’s musical talents and his love of the lake that eventually earned him the proverbial title of “Mr. Tahoe.” 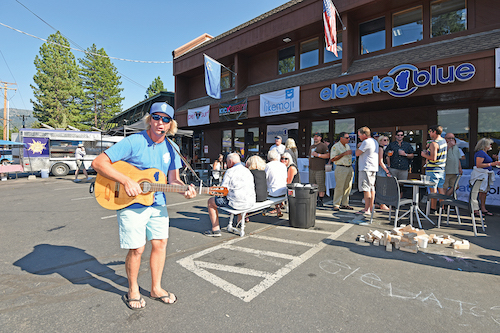 But Darin’s musical ambition isn’t tied to a single location.

“I think all places are kind of the same,” says Darin. “If you’re inspired by a place, then it’s easy to write about.”

For the past nine years, Darin has split his time between Nevada and Costa Rica, spending summers at Lake Tahoe and winters on the Pacific Coast of Central America.

“It’s funny,” he says from his second home in the tropics. “I built a reputation as being Mr. Tahoe for a long time, and I only moved to Costa Rica because I had so much opportunity to sing down here, so I just took it. And then I became Costa Man … I’m Costa Man here and Mr. Tahoe there.”

While Darin returned to his Tahoe stomping grounds in May, he had been in Costa Rica for a year and a half. The pandemic is largely to blame, though it’s also fair to say that Darin simply needed a break from Lake Tahoe.

“I used to be told by friends of mine years ago when I was starting Around Tahoe, ‘You’re years ahead of yourself. You’re way ahead of the game. The lake isn’t ready for this.’ And that was frustrating because I was trying to convey a message and I couldn’t get anyone to pay attention,” he says.

The message that Darin was trying to impart then is largely the same as the one that Around Tahoe Tours embodies now: The more tourists know, the more they care. 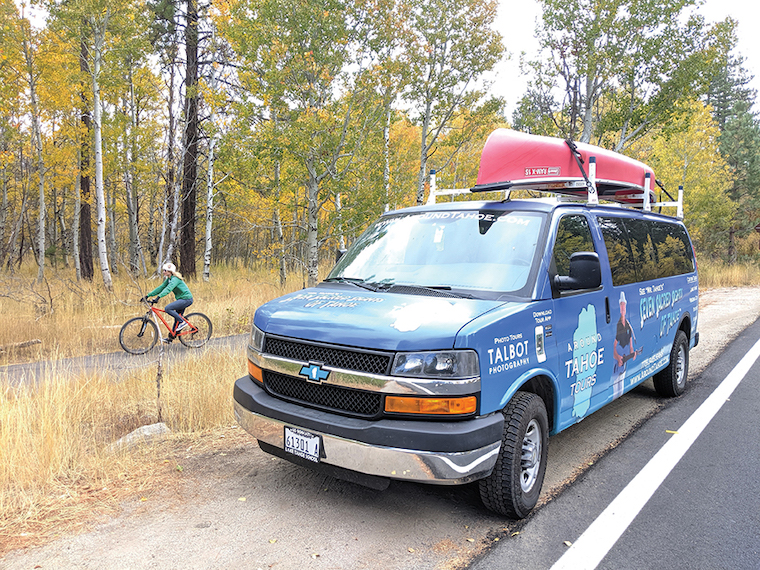 Both Darin and Chris are concerned about the future of Lake Tahoe. They worry about overcrowding and the presence of too many cars, which pollute the environment and damage the aesthetic appeal of the landscape. In this way, Around Tahoe Tours isn’t just a sightseeing company; it’s the Talbot brothers’ bid to eventually change the culture of transportation around the lake.

Their current tour van, which can seat up to eight people, is a Chevrolet 3500, though Chris hopes to one day transition to a more environmentally friendly vehicle.

That transition, however, like so much else over the past year, has been delayed by the pandemic.

A combination of travel restrictions and lockdowns led to Around Tahoe Tours having its worst year, though the greatest struggles haven’t been purely economic.

Chris is also on crutches after undergoing the first of two hip replacement surgeries (the second surgery is scheduled for August). It’s a product, he jokes, of decades of snowboarding exacerbated by the daily grind of running the business.

That said, the most significant challenge the brothers have faced extends beyond physical or financial ailments and even the pandemic itself. Seeing the lake change over all these years has meant more than watching buildings rise and fall.

“We’ve lost both of our parents,” says Chris. “We don’t have much of anything left except that van and our names and our talents.”

But there is good news: Mr. Tahoe returned from Costa Rica to take the reins on the tours as Chris recovers from surgery, and with Darin’s return the brothers feel a newfound sense of possibility.

“We are very busy so far,” says Chris. “The new model, which came from the virus, is private only, and that’s what people want. So we’re not trying to load up buses yet. That will come later. Right now, we’re just making sure that the people who want to go around the lake VIP get it done with us.”

The brothers have big dreams for both the business and the lake. They’ve seen it transform over the course of their lifetimes; now they would like to play a part in that transformation.

Chris would like to acquire an electric tour van. He even has hopes that, one day, they might have a fleet of battery-powered vehicles taking tourists around the lake. Darin builds upon this vision by imagining a tour business that also doubles as mass transit for people who live around the lake.

These are big ideas, and not necessarily easily implemented. However, part of the charm of taking a tour with the Talbot brothers is that they’re not just showing you the lake; they’re showing you what the lake could be.

If the last year has proved anything, it’s that the future is uncertain. This uncertainty tends to go both ways, making space for both unseen hardship and unexpected resilience. The only thing that’s for sure when it comes to the Talbot brothers is that they’ll be around Lake Tahoe, and happy to show it off.

Matt Jones is a Reno-based writer. 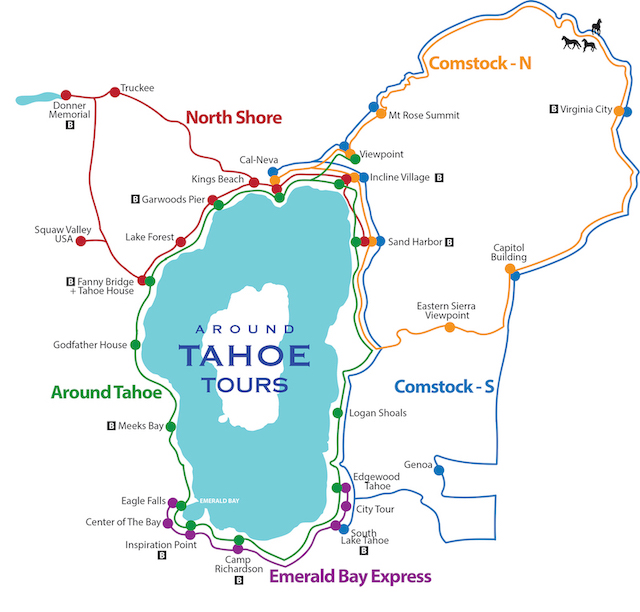 Around Tahoe Tours offers several day-trip excursions in the Lake Tahoe Basin and beyond, including six-hour trips around the entire lake and to historic Virginia City, as well as a three-hour sunset pub tour on the North Shore and an educational jaunt to Emerald Bay. The Talbot brothers plan to add a color-gazing fall tour in September, a Tahoe ski tour this winter and a Thunderbird Lodge tour next year.