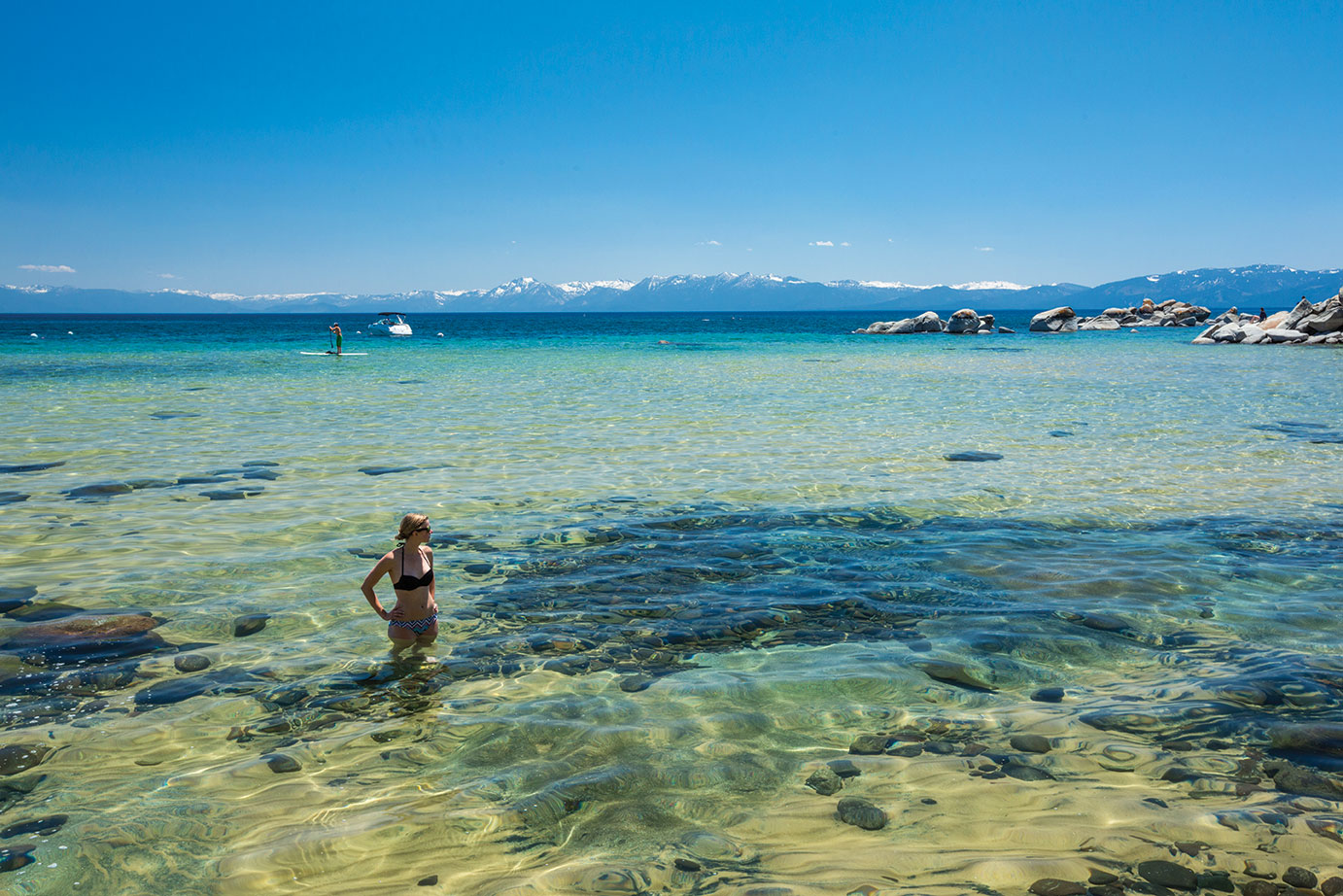 in Best of Tahoe 2016 | Environment | Written by Matthew Renda

For centuries, the marsh served as a natural filtration system for the Upper Truckee River, the largest of the 63 tributaries feeding Tahoe’s crystalline waters, sifting out fine sediments that siphon into The Lake, compromising its famed clarity.

The problem is, according to several agencies and their scientists, the marsh no longer functions this way.

The Upper Truckee’s flow was altered in the 1960s and half of the marsh was destroyed to make way for the Tahoe Keys, a South Shore development featuring rows of houses built alongside a series of interconnecting manmade canals.

Consensus has since emerged that the project, begun in 1960 and completed in 1975, represents the single greatest incident of human-caused environmental degradation to Lake Tahoe’s shoreline.

“The Upper Truckee River Marsh is the largest alpine marsh in the Sierra Nevada,” says Darcie Goodman Collins, executive director of the nonprofit League to Save Lake Tahoe. “The river provides the largest contribution of sediment loading to The Lake, so restoring the marsh has the potential to have a huge impact on water clarity.”

In Tahoe, there is political will to redress this environmental disaster by rerouting the Upper Truckee through the marsh while restoring many of the natural features of the 500-acre wetland.

A consortium of agencies led by the California Tahoe Conservancy (CTC) are undertaking a roughly $12 million project to improve wildlife habitat, decrease periodic flooding and address that sovereign of Tahoe’s environmental indicators—water clarity.

The major remaining impediment is money.

The CTC is chasing grants and hunting for funding through California and Nevada, but the progress and pace of the cardinal environmental project hinges on the passage of a piece of federal legislation called the Lake Tahoe Restoration Act (LTRA).

The legislation, authored by Senator Dean Heller (R-Nev.), passed out of a Senate committee in January, giving those that track these developments reason to believe it could pass even in the current Congressional climate.

“As a lifelong Nevadan and an avid outdoorsman, I grew up enjoying Nevada’s beautiful outdoors, such as Lake Tahoe,” Heller said in a January statement. “Today’s committee passage is a big step toward combating the numerous threats that take a toll on the Lake Tahoe Basin.”

There is a similar bill in the House of Representatives, which also passed out of committee.

The Senate bill allocates more than $415 million in federal dollars to the Lake Tahoe Basin for various projects, including the Upper Truckee Marsh Restoration project. The bill also frees up $150 million for various fuels reduction projects in the Basin aimed at reducing the risk of catastrophic wildfire and $80 million in funding for the Tahoe Regional Planning Agency’s (TRPA) Environmental Improvement Program, to include invasive species management, stormwater runoff management projects, Lahontan cutthroat trout recovery and other assorted projects specific to environmental improvement in Lake Tahoe.

In Lake Tahoe, the environment and the economy are two sides of the same coin, officials say.

“There is recognition that the environment is the main driver of our economy,” says Tom Lotshaw, TRPA spokesman. “The bill has passed out of committee in both houses, so we are optimistic it gets passed.”

That optimism is founded in part on a bipartisan approach to the bill’s introduction, an outlier in Washington, D.C.’s present climate of polarization.

“I think this year, more so than in years past, I am very optimistic on the outlook of the LTRA,” says Collins, who journeyed to D.C. in an effort to lobby elected officials in Washington to understand the importance of continuing their investment in Lake Tahoe. “It’s bipartisan thanks to the leadership of Senator Heller.”

“The impressive public-private partnership in Tahoe has made great gains over the years, but more work remains to restore Tahoe’s greatness,” Feinstein said in January. “We must maintain the momentum and get this bill signed into law.”

Whether that can happen in a Republican-dominated Congress, which has other priorities in an election year that continues to defy America’s political norms, is a cause for concern, say sources close to the senators, who spoke to Tahoe Quarterly on condition of anonymity. Whether the bill is taken up for a vote on the floor is entirely at the discretion of Senator Mitch McConnell (R-Ken.).

A plethora of legislative bills make it out of committee every year only to languish and die, and there is a possibility LTRA could meet the same fate, a source says.

If the bill isn’t taken up for a vote by the end of the calendar year, it will have to be reintroduced.

Should the bill not make it, it wouldn’t be the first time.

The Lake Tahoe Restoration Act of 2011 was set to allocate the exact same dollar amount for similar purposes but never made it up for vote, despite a coterie of legislators including Reid, Feinstein and Heller pledging support at the annual Tahoe Summit in August 2011.

That year, deficit hawks were rabid to cut spending as the Great Recession continued to rage; the bill never made it out of committee in either house.

Contributing to a more optimistic take on the bill’s fate, the federal government has carved out a large amount of funding for environmental restoration projects in Lake Tahoe in the past.

In 1997, then-President Bill Clinton visited Lake Tahoe to discuss his environmental agenda as well as ecological problems unique to the Basin, including the much-publicized decline in water clarity.

The event not only served as the inaugural Tahoe Summit, but led to the passage of the initial LTRA in 2000, which led in turn to TRPA’s creation of the Environmental Improvement Program.

Since 1997, more than $1.9 billion has funneled through the program and been used to conduct a raft of various environmentally-oriented projects.

Using the proceeds from land sales conducted in the south of Nevada near Las Vegas—a program known as the Southern Nevada Public Land Management Act (SNPLMA)—the federal government contributed about 32 percent of the total.

The aggregate—also made up of contributions by the states of California and Nevada along with private sources—has been used to administer a range of programs, from wildfire fuels reduction to the restoration of Incline Creek to preventing quagga mussels and other aquatic invasive species from affecting Tahoe’s delicate ecosystem.

Money has also been used to enhance recreational amenities at Tahoe, such as funding in the construction of the Heavenly Gondola and village and the Sand Harbor Visitor Center.

“Since President Clinton held a Presidential Forum at Lake Tahoe in 1997, we have been successful in passing one bill, which has made a big difference, from improving the clarity of The Lake to restoring habitat,” Feinstein says.

But that money has finally run dry.

In January, TRPA announced it received about $30 million to help an array of wildland fire management projects around the Basin, through SNPLMA. It’s one of the final remnants of the federal legislation passed at the turn of the century.

To receive any further funding from SNPLMA or any other federal programs, the current iteration of the LTRA must be brought up for a vote in both houses and be signed into law by President Barack Obama, Lotshaw says.

For Collins, the passage of this bill is not simply a sign that the federal government is willing to undertake a new commitment to the Lake Tahoe Basin, but will also follow through on the one it made about 20 years ago.

The numerous environmental projects undertaken as a result of the LTRA have been a “huge success, specifically in interrupting the decline of clarity in Lake Tahoe,” Collins says. “The federal government made a huge investment in projects toward those goals. To ensure this investment is not for nothing is one of main reasons the law should be renewed.”

An example is the Upper Truckee River.

Far upstream of the marsh, the United States Forest Service and other agencies used federal dollars to conduct a restoration project aimed at reducing erosion, rebuilding a meadow and improving fish habitat.

The work, performed on a major reach of the Upper Truckee, was aimed at addressing the overarching goal of reducing the amount of sediment the largest tributary in the Basin contributes to The Lake.

If the river is not rechanneled so it flows through the filtration system presented by the marsh ecosystem, the gains achieved by the first project are left unrealized.

Without continued investment, the guardians of Lake Tahoe fret its famed liquid transparency, which has recovered substantially since Clinton came to Tahoe, could once again bend toward a murky opacity, leaving its residents and visitors with nothing more than a memory of its clear blue.