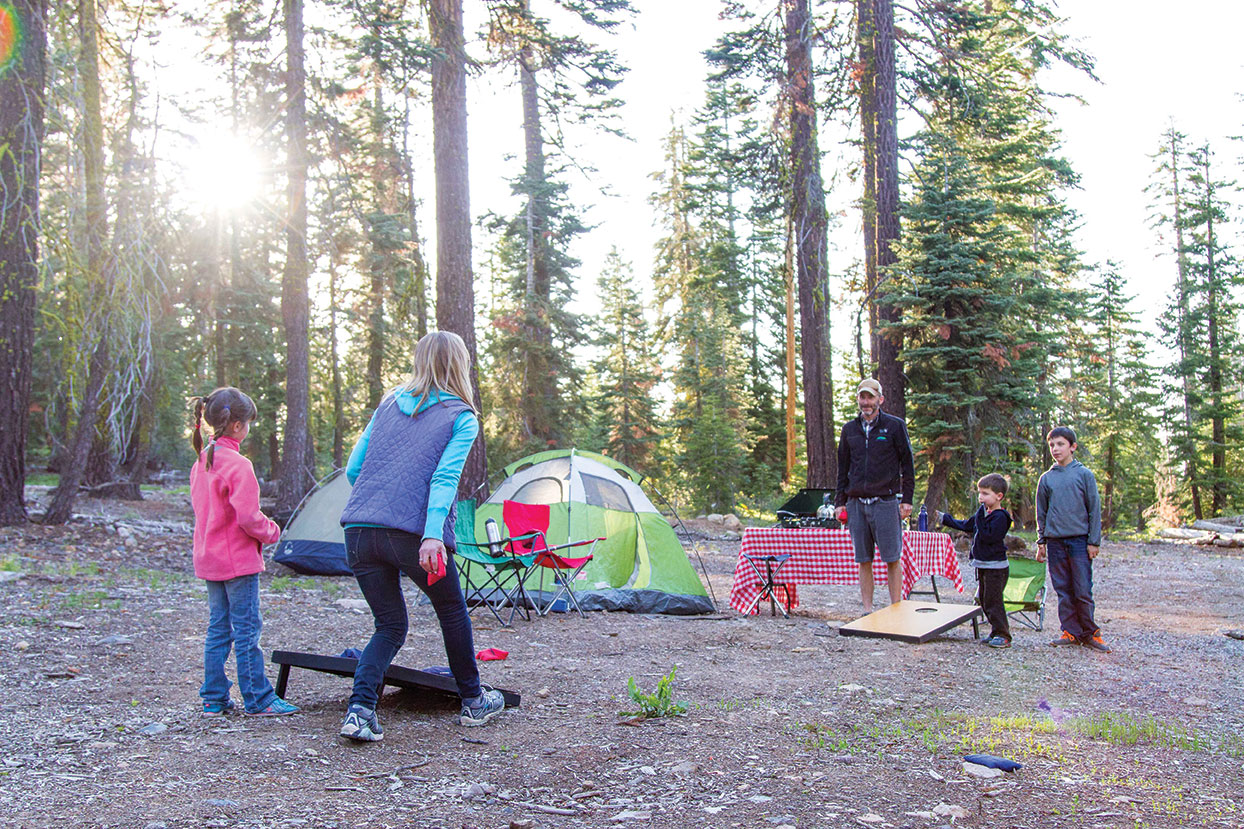 A recent proposal for a 550-unit campground atop Brockway Summit has conservation groups and developers at odds over how much development the region can support. The development agreement, which includes a huge conservation component, has some in the land management community touting the deal as a paradigm for future conservation. Others assert the benefits pale in comparison to the costs.

“There is a lot going on in the greater Northern Tahoe area as development is picking up in the region,” says Tom Mooers, executive director of Sierra Watch, which occupies a convoluted position in the development of the Brockway Summit area. “2016 will prove an important year for Tahoe.”

Last July, Truckee’s Mountainside Partners issued a press release stating plans to develop a 550-unit campground in the Tahoe Basin. The Brockway Campground, as it is called, is being touted by the developers as the first new North Tahoe campground in more than 20 years, and provides a solution to the dearth of available camping in the Lake Tahoe Basin in general and specifically the North Shore. 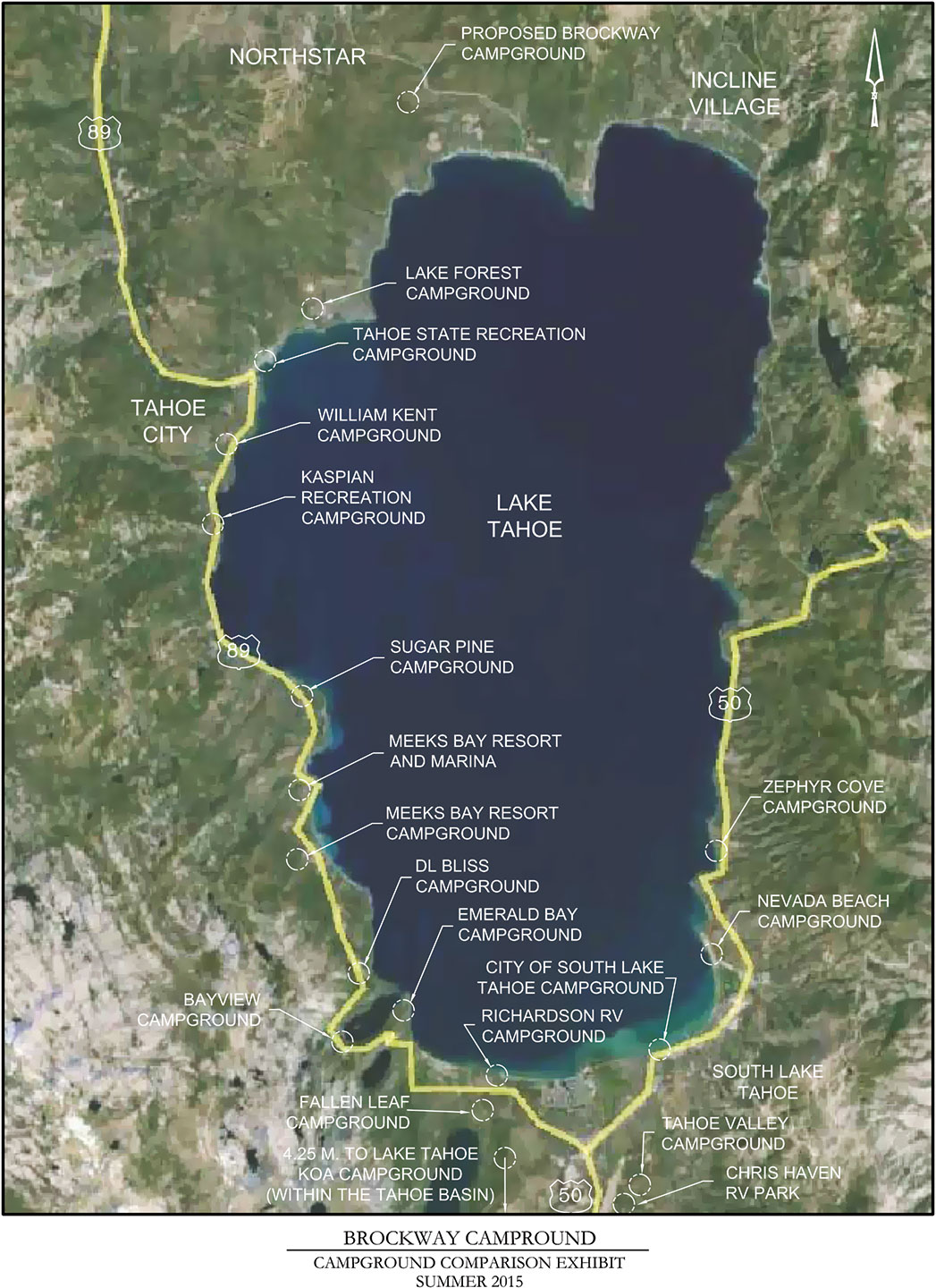 “Currently, only two percent of the existing campsites [around Tahoe] are in North Lake Tahoe,” says Blake Riva, managing partner of Mountainside Partners. “With camping being so popular in the Tahoe region, we believe Brockway Campground will give more families the opportunity to enjoy a camping experience in North Lake Tahoe.”

The developers enlisted Bud Surles, a consultant and former Yellowstone National Park assistant superintendent, to design the campground, which is slated to include the full range of options from tent sites to campers and eco-shelters.

While the developers continue to say the project is aligned with the Tahoe Regional Planning Agency’s (TRPA) newly-minted Regional Plan, which emphasizes recreational thresholds, some in the conservation community are balking at the scope, size and location of the proposed project.

“The size and type of campground when combined with the location is the issue,” says Jesse Patterson, deputy director of the League to Save Lake Tahoe. “We could support a smaller project in a similar location.”

Part of the problem, according to the League, is that while a campground traditionally implies a rustic setting with limited development impacts on the land, the proposed project is replete with high-impact amenities such as paved roads, a swimming pool, a cafeteria, multiple restroom facilities and a large commons area.

“The intent is to keep people on site,” Patterson says. “But we find it hard to believe people are going to travel on the ridge and just stay there. People will want to recreate at Tahoe.”

This influx of visitors means more vehicle miles travelled in the Basin, creating more traffic jams, more fumes that compromise air quality and more materials that are transferred from the roads into The Lake, which can compromise Tahoe’s famed clarity, opponents say.

The League says the project betrays the spirit of the new Regional Plan, which allows for restrained development but encourages the placement of such development within the confines of already built clusters such as the towns dotting Tahoe’s shores.

“When you propose a project that is relatively isolated, it puts people in their cars and that presents a lot of adverse impacts to The Lake,” Patterson says. 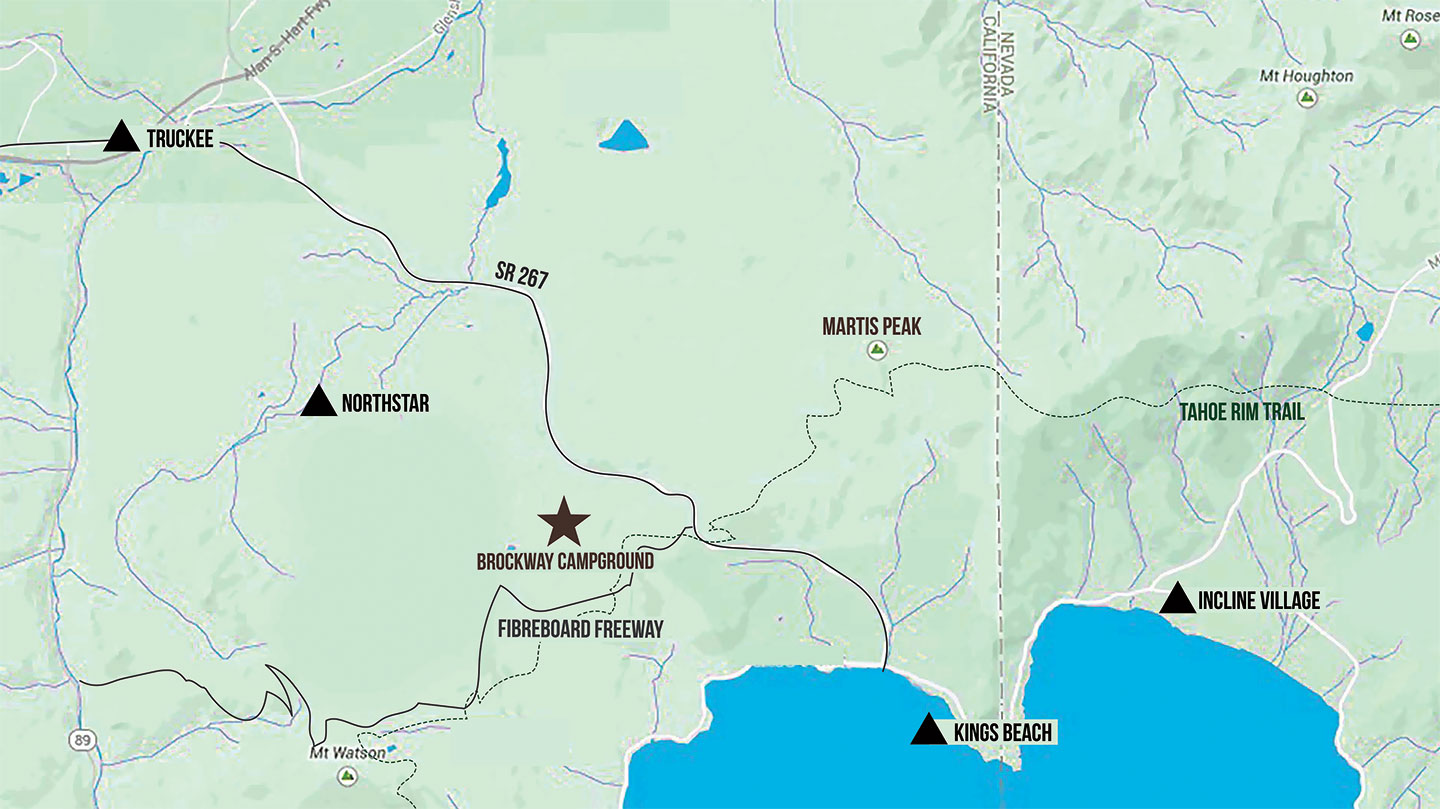 Brockway Campground, indicated by the star, would sit off the west side of Highway 267 between Kings Beach
and Truckee, just south of Northstar California on the Tahoe Basin side of Brockway Summit, map courtesy
Brockway Campground

Riva said the development team was not prepared to specifically address vehicle miles travelled, but said the robust public review process was aimed at incorporating the entire spectrum of views from the community.

Due to the proposed location of the campground within the community, the TRPA will be the agency in charge of the project’s approval process. The public review process will begin in the spring and could take anywhere from 18 months to two years, Riva says.

Some in the outdoor recreation community have taken cautious steps toward throwing support behind the project.

Mary Bennington, Tahoe Rim Trail Association (TRTA) executive director, says the board has yet to offer an unalloyed endorsement of the project, but notes that improvements to the Tahoe Rim Trail, particularly around the Fiberboard Freeway, could dovetail with the project. However, TRTA has reservations about building a campground so close to the trail, which could lead to a surge not only in users, but in what Bennington deemed “uninitiated users.”

Tom Mooers and Sierra Watch’s opposition to the campground is notable because they not only support another project proposed on the same 700-acre parcel of land, but they assisted in bringing it about. Previous to announcing Brockway Campground, Mountainside Partners and Sierra Pacific Industries (SPI) stuck a deal with Sierra Watch, Mountain Area Preservation and the Trust for Public Land that essentially amounted to a property swap.

The conservation groups would be granted a conservation easement for approximately 6,300 acres on the east side of Highway 267 at Brockway Summit. The easement would permanently protect a large swath of land contiguous to the Mt. Rose Wilderness, meaning nearly 50,000 acres of undeveloped land, including Waddle Ranch and Toiyabe National Forest, would remain pristine.

In exchange, Mountainside Partners and SPI would be granted the right to develop a portion of the nearly 2,000-acre parcel on the west side of Highway 267 at Brockway Summit with proximity to Northstar California.

Initially, the development consortium put forth a 760-unit residential development with commercial elements and a slice of open space that was slated to occupy the land on the west side of the summit. The plan called for nearly 100 of the residential units, a corner of the proposed project, to be situated inside the Tahoe Basin. That raised the hackles of some Tahoe-based conservation groups and would have triggered an approval process under the TRPA, as opposed to Placer County.

Subsequently, the development team pulled their initial proposal and resubmitted the current plan. It is dubbed the Martis Valley West Project and 760 residential units and 6.6 acres of commercial space are still in play, but it is reconfigured to be entirely outside the Lake Tahoe Basin.

As soon as the reconfiguration was announced, rumors began percolating that the development team planned to build a campground on the Tahoe portion of the parcel. The League to Save Lake Tahoe condemned such plans before they became official.

In July, Mountainside Partners officially announced plans for the campground.

“We are opposed to the Brockway Campground proposal,” says Mooers, who helped cinch the conservation development package for the Martis Valley West Project. “It’s a major development in a relatively remote and pristine part of the Lake Tahoe Basin.”

Mooers, who despite seizing the opportunity to preserve the east side of Brockway Summit has consistently expressed reservations on the west side, said the two developments, which are planned for the same parcel, but in different watersheds, are not worth the cost.

“Either project taken by itself is problematic,” he says. “But together they are too much.”

The developments are two distinct and separate projects, Riva says.

“Each project will be subject to a thorough environmental review process,” Riva says. “Neither project depends on the other. As is required, the cumulative impacts of both projects will be considered.”

The Draft Environmental Impact Report (DEIR) for the Martis Valley West Project was created in autumn 2015 and multiple community members commented. However, many of the conservation community’s comments pertained more to the Brockway Campground and the cumulative effects of that project when coupled with the residential/commercial project on the Martis Valley side of the parcel.

In fact, a letter sent by an environmental law firm Shute, Mihaly & Weinberger on behalf of Sierra Watch and MAP, alleges the DEIR as currently formulated is illegal as it fails to account for the cumulative effects of the two projects and also violates the California Environmental Quality Act (CEQA) by disingenuously dividing what should be considered one project on one large parcel into two smaller projects.

“You can’t take a single property and divide it up into several smaller projects to make it look less damaging,” Mooers says.

In an unusual move, Sierra Watch is asking Placer County to rescind the DEIR and start over. Most times after the DEIR is circulated, various community groups in support and opposition to the development make comments with an eye toward the Final Environmental Impact Report (FEIR), but asking for a revocation counts as an escalation in tactics.

Riva maintains the projects are distinct. The Martis Valley West Project, which is the project currently undergoing public review, has enjoyed widespread endorsement from the Lake Tahoe community, Riva notes.

“The Martis Valley West Project is a combined conservation and development plan, and we have been working with key stakeholders for over 10 years to accomplish the conservation goal of protecting 6,376 acres of open space in the heart of Martis Valley,” Riva says. “The public review process [for the Brockway Campground] allows for the possibility of a challenge, but as it relates to the Martis Valley West Project, we have spent a fair amount of time upfront working with key stakeholders to create the combined conservation and development plan we believe will result in a win-win for the region and future generations.”