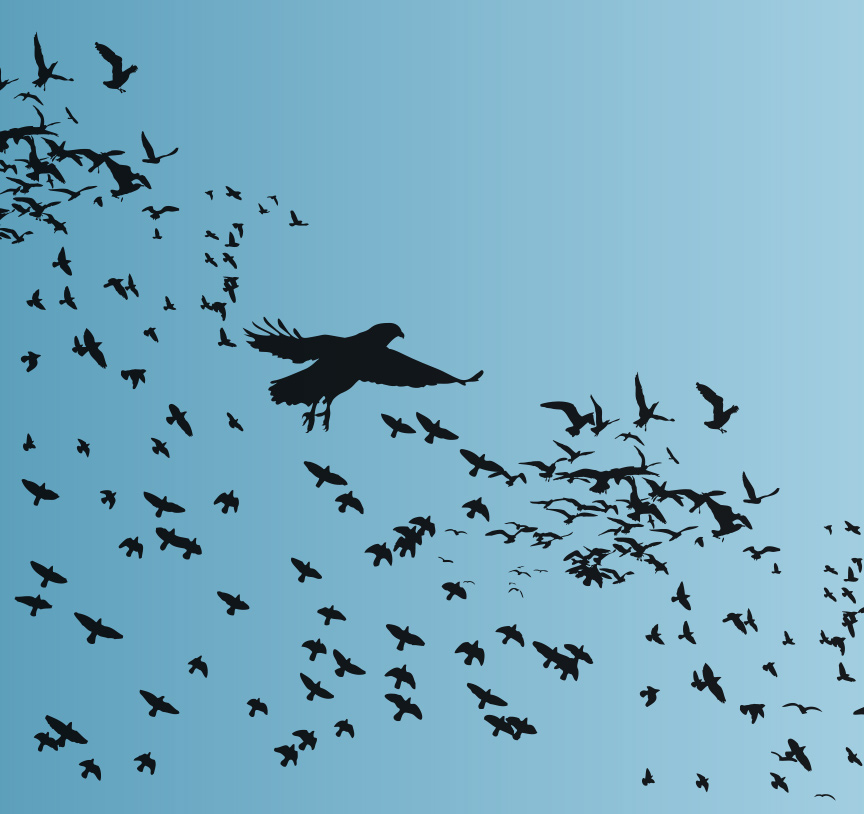 in Environment | Ski & Ride 2013 | Written by Will Richardson

One of the many wonderful aspects of observing birds is the varied and dynamic nature of bird communities. One can travel to new regions and through different habitat types, encountering diverse species all along the way. Of course, the birds travel, too, and nothing adds more to birding’s allure than migration.

It is easy to think of the birds occurring at Tahoe as our own, but there is a considerable amount of seasonal turnover. Migration takes a lot of energy and is fraught with the perils of bad weather, tricky navigation, increased exposure to predators, finding food in unfamiliar territory and even the danger of collision with tall buildings and other structures. Why not just stay put? Birds exploit their considerable ability to travel in search of resources, to minimize competition and to meet their energetic demands, whether raising young or trying to stay warm. For most species found at Tahoe, migration’s benefits outweigh the costs.

There are four main categories of Lake Tahoe fowl: year-round residents, short-distance migrants, seasonal residents and passage migrants. The hardy non-migrant, resident species must find a way to endure winter’s harsh months, but they benefit by getting a jump on breeding season and avoid the costs and dangers of migration. Examples include the familiar mountain chickadee and Steller’s jay. Tahoe’s short-distance migrants typically head to nearby lower elevations with the cold, sometimes only migrating as weather and resource limitations dictate. Song sparrows, American robins, mountain bluebirds and even Audubon’s warblers may attempt to spend the winter, but periods of heavy weather usually force them downslope.

Many “local” birds are residents just for a few months. Like tourists, certain species only visit during the summer; most spend the remainder of their year in the tropics. These include many of our warblers, vireos and flycatchers. If you look at a map of the Americas and consider how small Central America is compared to the United States and Canada, it is easy to imagine how crowded it must get when all of North America’s migrants descend for the winter (this also provides perspective on how a relatively small amount of habitat loss there can greatly impact “our” birds). In the summer, these migrants fan out to the north, where they benefit from less competition for nesting territories, longer days and ample insect prey. Some northern breeders, mostly waterfowl and raptors, only visit Tahoe during the winter.

Last are the passage migrants. These species visit the Basin while traveling from wintering to breeding grounds and vice versa. Of the more than 300 species recorded at Lake Tahoe, the passage migrants may be the largest group, and cause the most excitement among birders. This is partly because we only see birds like Townsend’s warbler and greater yellowlegs for a relatively brief period each year, but passage migrants from just about anywhere have the potential to turn up at Lake Tahoe. Seeing a bird in a completely unexpected location is fun for birders though it often doesn’t bode well for that particular bird. However, these vagrancies occasionally lead to new migratory pathways and even range expansion.

With practice, one gains the ability to mark time by these changes: The first tree swallows return in early March; loons pass through in April; goldeneyes return in October. May and September have the greatest volume of movement, but turnover happens year-round. For example, June is a month replete with both coming and going: During the first week, willow flycatchers and Swainson’s thrushes are just showing up on their summer territories to breed. That same week, young orange-crowned warblers, whose parents nested in the Sierra Nevada foothills in April and May, begin to arrive in Tahoe to spend the summer putting on fat and molting before their migration to lower latitudes and elevations. By the month’s third week, we begin to see southbound male rufous hummingbirds, which, because males take no part in rearing the young, were free to turn around almost immediately after arriving at their breeding grounds in the Cascades and Canadian Rocky Mountains. As the hummingbirds head south through the Sierra Nevada, they track the peak of the wildflower bloom as it climbs in elevation. By the last days of June, adult least sandpipers arrive on Tahoe’s beaches, having already bred in Alaska and the Yukon.

This fall, note the change in birds accompanying the change in seasons. Flocks of sparrows, waxwings and other species pass through in October and November. Lingering shorebirds and songbirds depart for lower elevations and latitudes, and waterfowl flood in for the winter. Some of these birds may have traveled from Russia or the High Arctic; some may be heading to Argentina for the winter.  These are difficult journeys, and a recuperative stop at Lake Tahoe can be critical to their survival. Please make them feel welcome.

Will Richardson is an avid birder and the co-executive director at the Tahoe Institute for Natural Science.