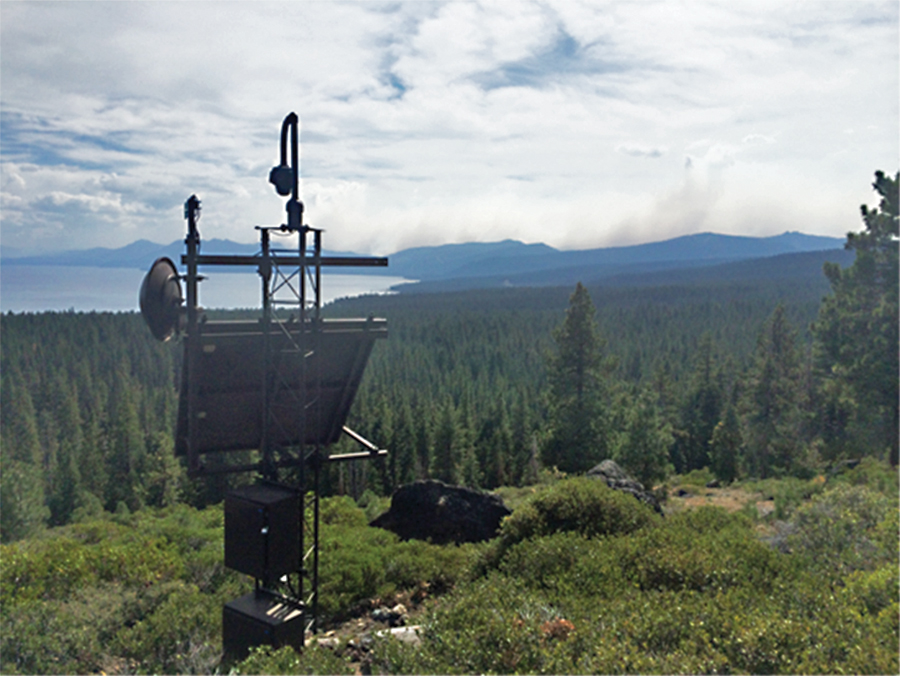 Graham Kent knows what it’s like to have a wildfire roaring toward his home. In 2003, Kent’s San Diego County house was in the path of the Cedar Fire. Towering flames moved within a few hundred yards, but never reached his property. Many neighbors weren’t so lucky.

Buffeted by the Santa Ana winds, the fire torched nearly 300,000 acres and more than 2,800 buildings. Fifteen people died in the blaze. The economic impact from Southern California wildfires that season was estimated at over $1 billion.

“Until you’ve lived through a situation like that, you don’t realize how fast these things can move,” Kent says.

After leaving his job at the Scripps Institute of Oceanography at UC San Diego, Kent took a position as the director of the Nevada Seismological Laboratory, returning to the Tahoe area. He and his wife are South Tahoe High School grads. Now, Kent heads a program he hopes will help the Lake Tahoe Basin avoid large fires.

Kent’s goal is to expand a network of high-definition cameras.

circling The Lake. He believes the system, called AlertTAHOE, could be invaluable in the early detection and prevention of fires that would otherwise cause widespread damage. So far, the few cameras already in place have proved useful tools to local firefighters.

“The fire folks are already using it to look for fires in the summer,” Kent says. “As we’ve gotten more cameras up, they’ve been able to use it to watch the smoke, how it moves around the Basin and how it might affect people.”

Currently, there are four cameras in the AlertTAHOE network: One on Snow Valley Peak on Lake Tahoe’s East Shore, one atop Heavenly Mountain Resort’s Gunbarrel lift, one at Homewood Mountain Resort and another on California Tahoe Conservancy land on the North Shore. The live camera streams are available through an online interface to anyone who’d like to view.

Kent hopes to add as many as 16 more cameras to the system for an overlapping view of the entire Basin. He’s seeking $2 million in funding from Lake Tahoe area residents and businesses. The cost is a fraction of the economic hit a wildfire could cause, Kent says.

“Here, you can’t have a failure,” he says. “You’ve got to hit the potential for fire with everything you can. There are no guarantees in life, but you can build a system that would knock the risk down.”

The system already successfully assisted with early detection of fires. Last year, Mac Heller, manager of the Camino dispatch center used by several agencies in the Basin, was stationed at the French Fire near Fresno. He had a few free minutes and decided to check out the AlertTAHOE cameras. He knew there had been some lightning in the area.

“I noticed there was smoke out there towards Spooner Summit,” Heller says. “I called the Basin and asked them if they were working a fire. They said no.”

Forest Service firefighters responded to the smoke Heller reported and were able to put out the growing fire before it had consumed an acre of the Spooner Summit forest.

“We probably wouldn’t have known the fire was there until the next day after it had gotten bigger,” Heller says.

To help with detection, Kent wants to open the feeds to anyone who would like to watch. He wants to build in a Twitter interface, so when someone watching the cameras sees smoke, they can easily notify officials. It’s like crowdsourcing fire lookouts, he says. 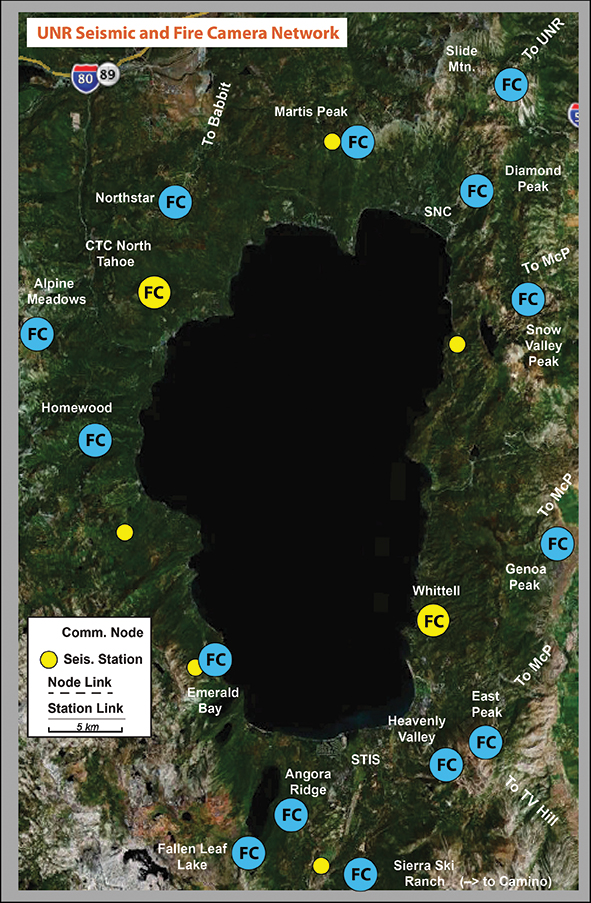 The proposed network of cameras would circle
the Basin, providing overlapping views of the area

Pulling up the feeds in his University of Nevada, Reno, office, Kent demonstrates how easy it is to spot fires. He uses a time-lapse function to show how the smoke from last year’s King Fire billowed over the region. He switches to an infrared recording and points out the flashing of the Cascade Fire. Looking even farther back, Kent believes the cameras would’ve helped stop the 2007 Angora Fire before it charred 254 homes and a large slice of the South Shore forest.

Steve Burns, acting forest fire chief of the Lake Tahoe Basin Management Unit, isn’t so sure. The blaze sped up so quickly, it would’ve been hard to scale the response much faster, he says. Still, he doesn’t deny the cameras could be useful tools in early detection.

“I think the potential is huge,” Burns says. “Early detection is key. It’s our initial attack and our response that’s going to make or break trying to stop the fires when they are small.”

So far, the cameras have been attached to existing infrastructure. This helps cut down on the costs and speed up assembly, Kent says. But there are still a lot of details to work out.

The cameras must be supported by a high-speed network and reliable power supplies, little of which is in place. Then, for cameras on public land, there’s permitting, raising money and actual construction. They’ll have to figure out how to notify online viewers of prescribed burns so those aren’t reported. And they hope to develop software that will allow the cameras to automatically detect new fires.

The lengthy to-do list notwithstanding, Kent sees the project as a smart investment in a time of increasing danger from large fires.

“We can choose to take control of our situation or we can wait for something to happen,” he says.