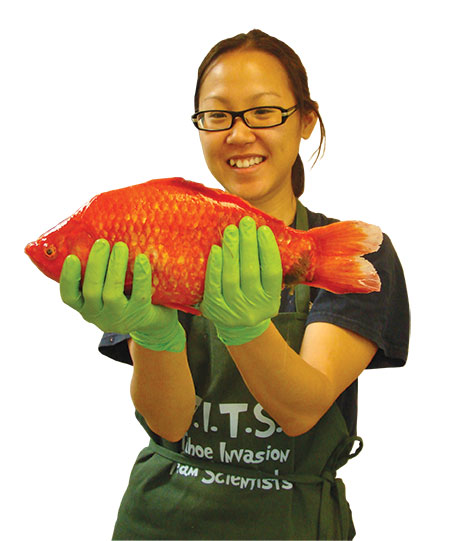 in Best of Tahoe 2013 | Environment | Written by Kyle Magin

The last time something gold made this kind of news in California, it sparked a rush.

But a 4.2 pound, 14-plus inch goldfish pulled out of Tahoe early in 2013 sparked little but alarm this time around. Researchers from the University of Nevada, Reno (UNR), led by scientist Deepak Chandra, pulled the monster out of the Tahoe Keys area of South Lake Tahoe. It was found in an area where the fish are thought to have been spawning and schooling, scientists say.

Most likely the product of aquarium dumping—pet-sized goldfish grow aggressively in the right environment—the find made international headlines and could presage bigger problems, area biologists say.

“While the public and press internationally have gotten excited about the goldfish, there are some true worries about what the find means for bluegill and bass in The Lake,” Chandra says.

Both bass and bluegill are non-native species that thrive in the warm waters of near-shore areas—the same areas that would allow a goldfish to reach such a large stature—and outcompete Tahoe’s eight native fish species for the minnows they eat in addition to preying on them, Chandra says. Between 1998 and 2009, Tahoe’s minnow population decreased 58 percent, according to a UNR report. Non-native species have been introduced as bait fish or as released pets over the past two decades, Chandra notes. Additionally, their excretions contain more lake-clouding nutrients, negatively affecting Tahoe’s clarity.

“The sad part about fish introductions is they’re much harder to remove once they’re established,” Chandra says. Game officials from Nevada and California use electric shocks to stun and capture the invasive fish and pull them out of The Lake.

Since 2011, officials have pulled 35,000 warm-water invasives from The Lake, according to a UNR report. Additionally, in 2011, the Nevada State Legislature passed a law outlawing aquarium dumping to combat the problem.

A 2010 study by Ohio’s Miami University doctoral student Andrew Tucker found that as Tahoe’s clarity in the form of UV transparency—the amount of light penetrating into the water—decreases, conditions become more and more favorable for bluegill to nest and reproduce. Tucker’s study found native species handle increased UV transparency levels exceptionally well—an asset stemming from both evolution and diet, he theorizes. With clarity levels lower than they were 50 years ago, Tahoe has increasingly become a refuge for non-natives to breed, the report found.

The report found most of the invasive species were concentrated in the south end of Lake Tahoe near highly developed areas, Tucker says.

The proliferation of bass and bluegill can have adverse effects on efforts to reintroduce or bolster Lake Tahoe’s native trout species, Chandra says.

“If we’re trying to promote these trout recoveries, this is a big worry for us,” Chandra says.

All the more reason to keep Tahoe blue.