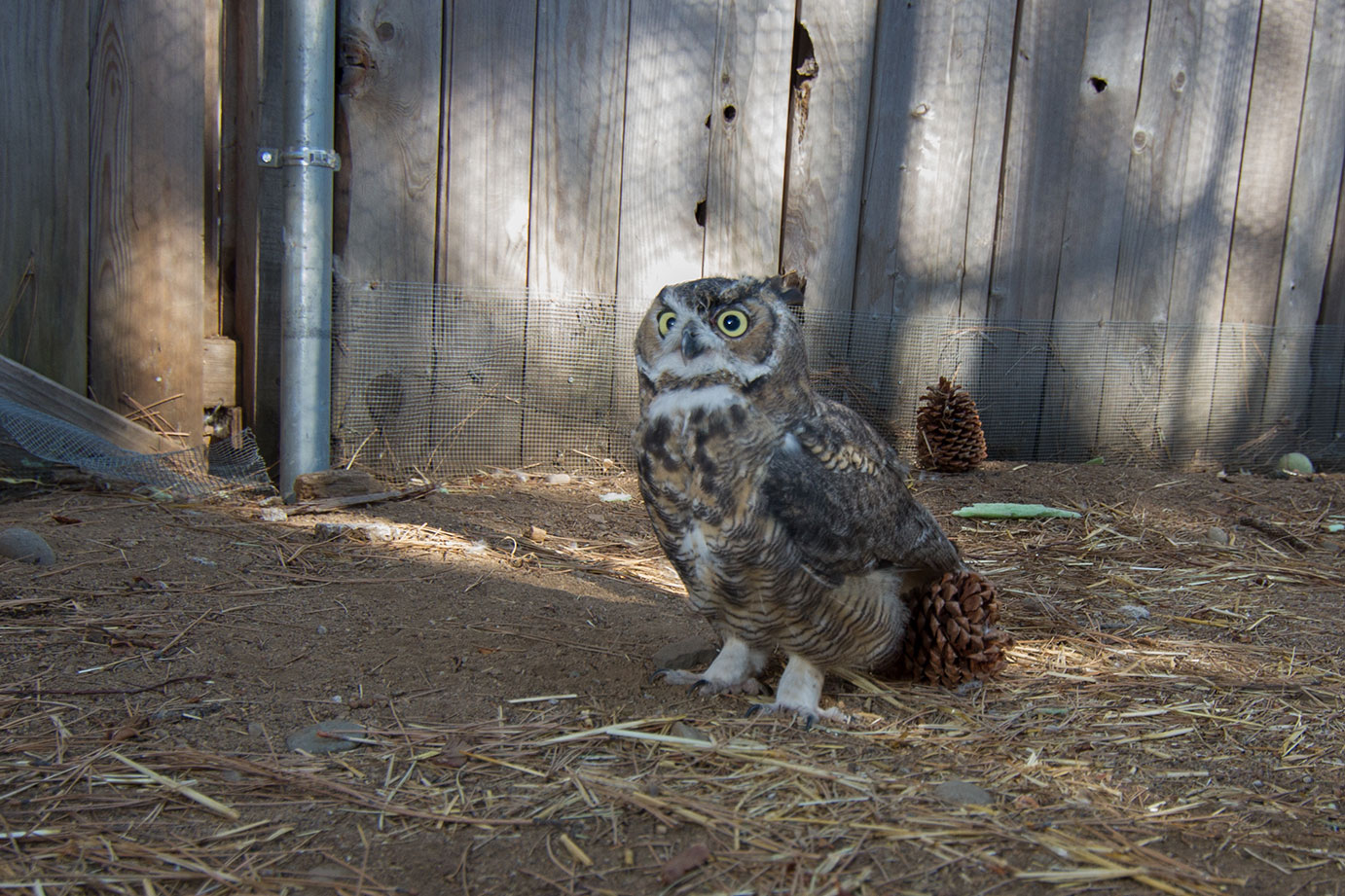 Cheryl Millham opens the door of Lake Tahoe Wildlife Care with an overwrought expression on her face. Still mixing a bottle of animal formula, she asks, “Who are you?”

Though I’d arranged the interview just days before with both Cheryl and her husband Tom, there was no indication she remembered. Reporters are likely not her highest priority. She yells for Tom upstairs, and Tom explains the reasoning behind Cheryl’s brusque greeting.

He looks up at a pair of flat-screen televisions. Each screen was divided into nine rectangular images, the feeds from the facility’s bevy of streaming cameras. In every one, animals—from raccoons to bear cubs, owls to Steller’s jays—could be seen exploring the confines of their enclosures.

“All of our cages are full. We’re overflowing,” Tom says, motioning to a pair of kennels on the floor of his office. “These two red-tailed hawks right here should be outside, but we don’t have any room.”

One of the hawks rattles its tiny aviary, nearly sending the box onto its side.

The Millhams have run Lake Tahoe Wildlife Care (LTWC) out of their South Lake Tahoe home for 37 years. As the facility evolved to raise, rehabilitate and release more species of animals, the couple has gradually dedicated their entire two-acre property to the mission.

But things are changing for the Millhams. In May, they signed the lease on a 27-acre property in South Lake Tahoe. The parcel will be home to a brand-new wildlife care facility, the culmination of a lifetime of work with the area’s sick, injured and orphaned animals.

“We’ve been dreaming of this for 25 years,” Tom says. “When we built the garage and clinic into our house in 1990, we knew it would be temporary. Twenty-five years is temporary, I guess.” 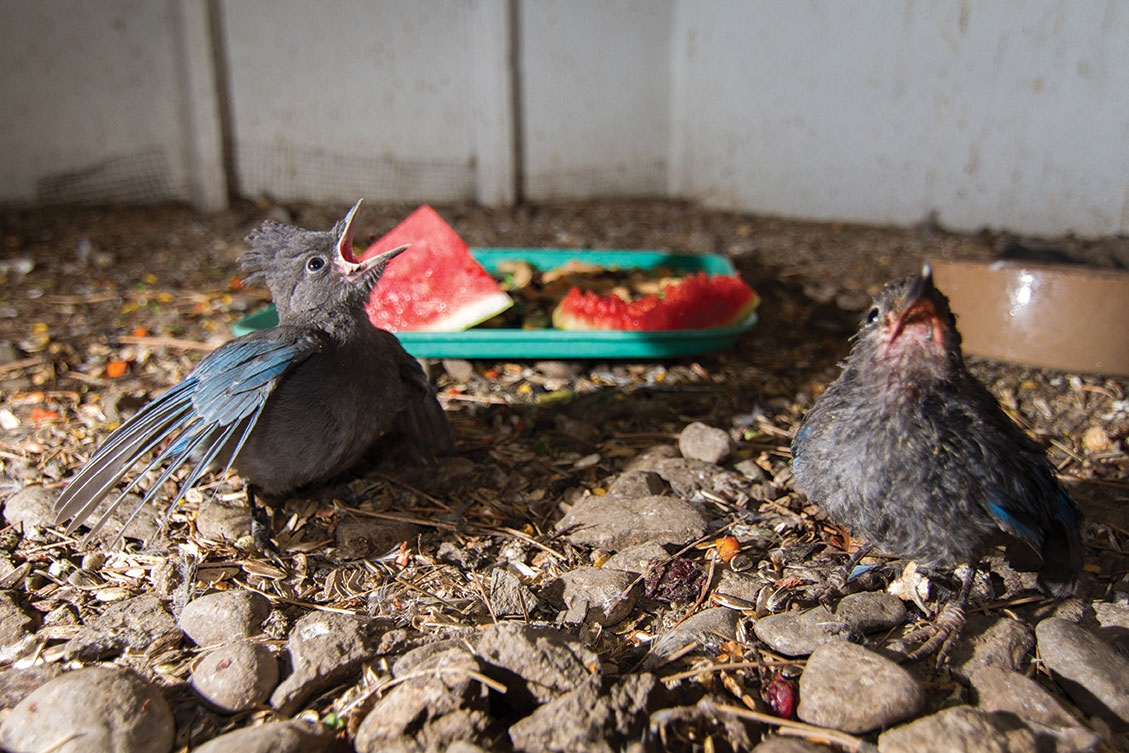 Over the years, the couple and their volunteers have cared for more than 24,000 animals, with more than 14,000 of the critters released back into the wild. LTWC became the only certified black bear rehabilitation facility in California. They’ve built pens for bear cubs, raptors, river otters, squirrels and more. At one time or another, they have housed ailing wildlife in nearly every room in their house. When I visited in July, a yellow-bellied marmot was living in the kitchen.

“They are just incredible people,” says Janice Dunn, a LTWC volunteer. “They never lose sight of who they are or what they stand for. It’s all about the animals.”

Often, caring for the wildlife means waking up at all hours of the night to feed, clean or accept animals. For the aging couple, the work never stops.

“For most people, when they go home from work, they’re home,” Tom says. “We’re here and people know we’re here. We get the doorbell ringing 24 hours a day sometimes.”

Outside, Tom leads me through the labyrinth of enclosures. A half dozen Steller’s jays eagerly sip formula from a dropper. A pair of young owls, both with eye problems, hop around the raptor mew. Nine bear cubs hide in the wings of several different pens. With the entire infrastructure built in the backyard of the Cherry Hills plot, the animals are housed close together.

“Not only have Tom and Cheryl converted their entire house and yard into a care facility, but the neighborhood has grown in around them,” says Juniper Anderson, who volunteered with the organization for several months. “The new space will allow for so many opportunities for them and the animals.”

It will also allow LTWC to expand. For example, rather than two 18-foot by 24-foot mews for the birds, they’ll have four 15-foot by 30-foot spaces, Tom says. The extra space means they can take in more birds, and avoid putting predator next to prey, which can cause extra stress to healing animals. LTWC will also be able to host classes and more training sessions, which have been difficult or impossible at the house, he adds.

The Millhams hope to begin construction on the first phase of the new facility in the spring of 2015 and move animals in the following year. The entire project is expected to take up to five years and cost around $10 million. LTWC received $3 million from the estate of Barbara Hartoonian and is still working to raise the rest of the funds.

The city government has assisted the Millhams in finding the new location and is looking forward to a larger, more open wildlife care center.

“It will be great for the organization to move to sufficient space,” says South Lake Tahoe city manager Nancy Kerry. “It will be great for the animals to have the space they need as well, and it’s incredible for the community to have such a wonderful resource here protecting the wildlife and educating all of us on wildlife care and rehabilitation.”

Certainly, the payoff will be more space for animals and more accessibility for the general public. And, of course, Tom and Cheryl will get their house back, as well as a more relaxed schedule as they intend to remain with LTWC in an advisory capacity, leaving the day-to-day operations to staff.

“We’re glad to have the ability to help out, and it’s been very rewarding, but we’re kind of looking forward to having somebody take over,” Tom says.

Asked what he’ll do with all his free time, Tom smiles and looks thoughtfully up at his TV monitors.

“That’s a really good question,” he says. “I don’t know. Sit back and relax a little bit, I guess.”