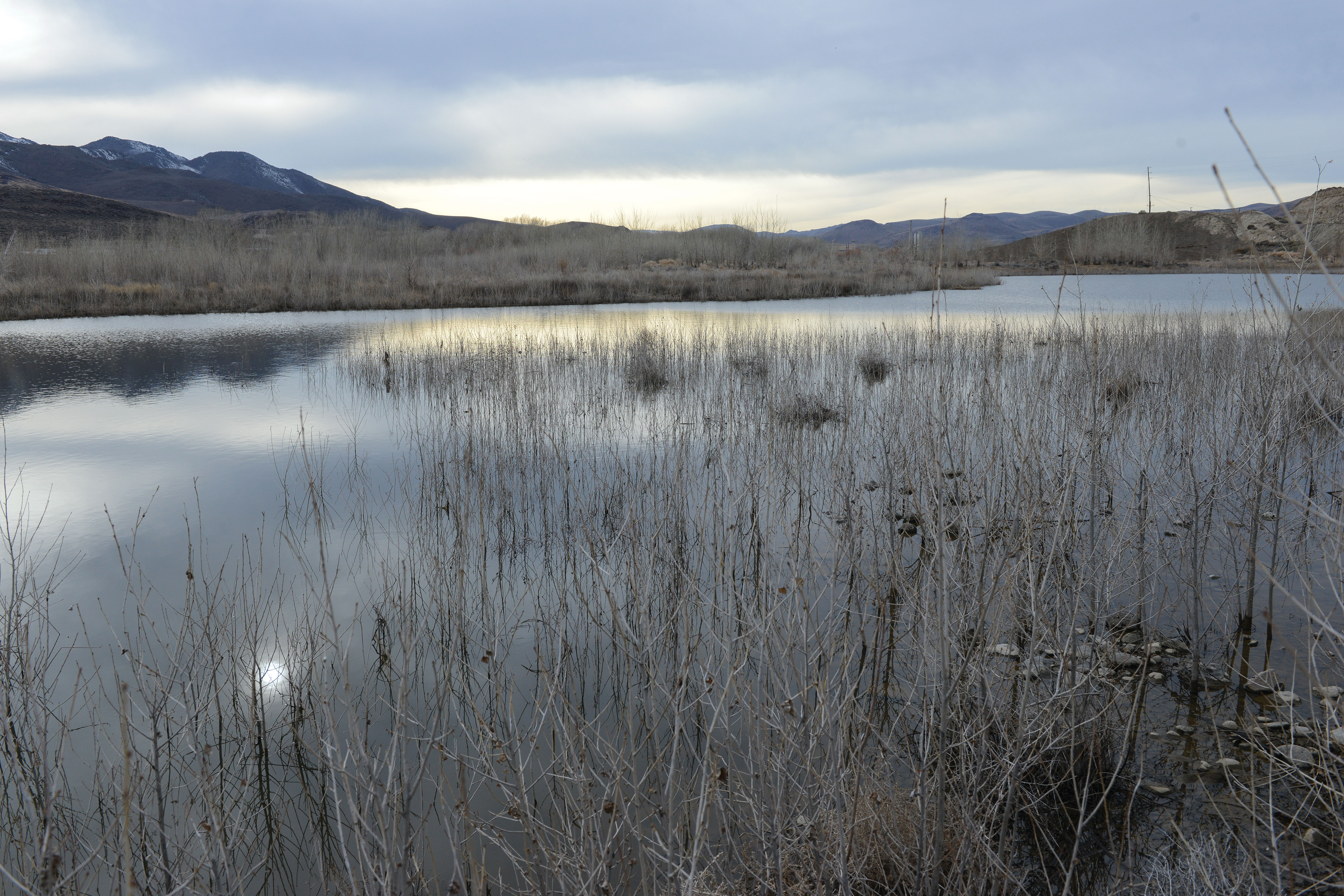 23 May Pines to Pyramid

The Truckee River, altered and damaged by well-meaning people decades ago, is being restored to something more closely mirroring nature’s intent. Conservationists have spent millions restoring miles of the lower river downstream of Reno. They have cut new meanders into the river channel, allowing nourishing floodwaters to spill naturally over the land. Wetlands and riverside forests are being cultivated and fish and wildlife flourish once again.

Another success story lies with Nevada’s state fish, the Lahontan cutthroat trout. Decades of work by biologists are paying off in a promising way, with the fish now spawning naturally up the river from Pyramid Lake for the first time in nearly 80 years. 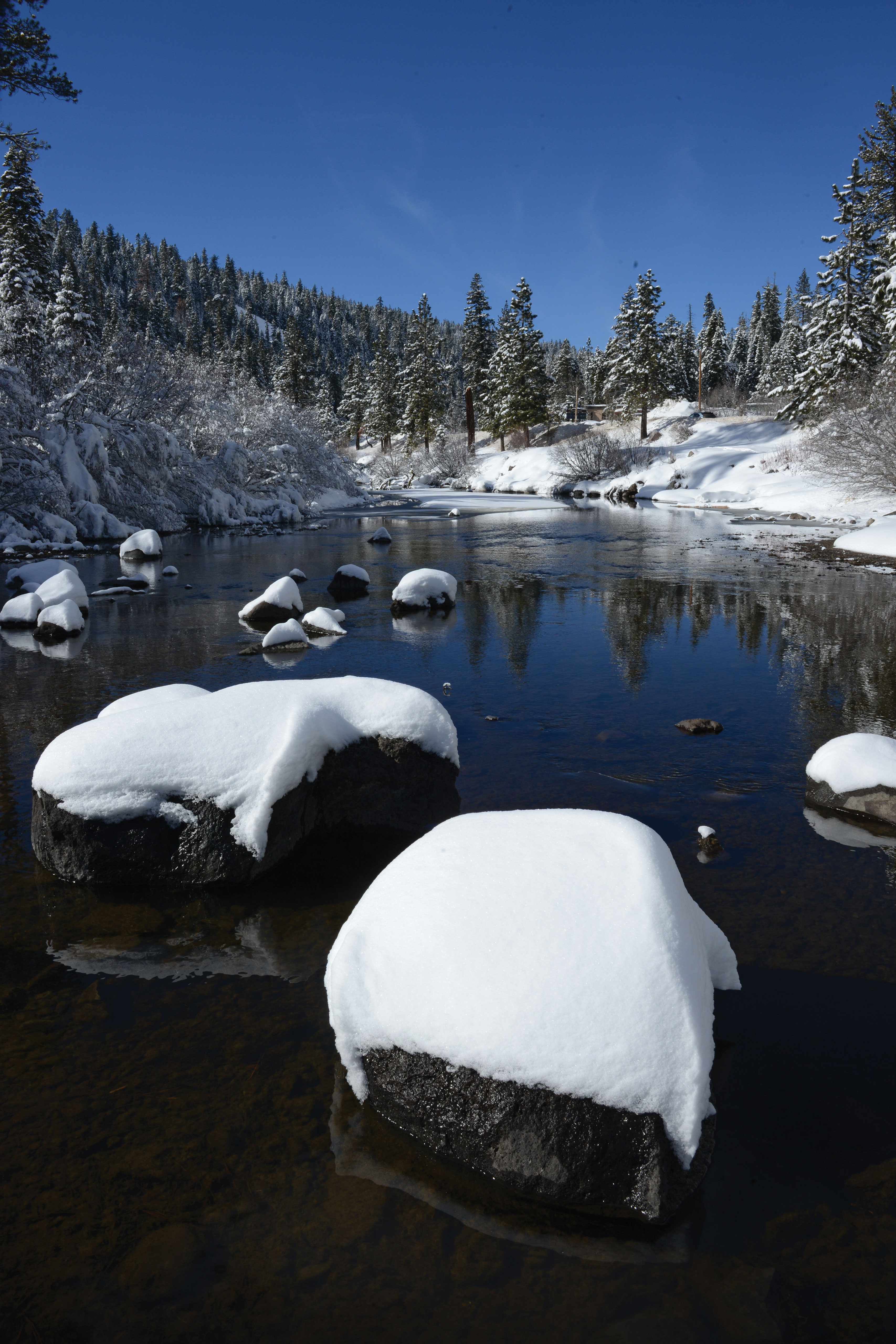 Not far from its birthplace at Lake Tahoe, the Truckee River slowly meanders above River Ranch after a
snowstorm on February 2, 2016.

The Truckee River, a so-called desert terminal river, is one of a few of its kind in the world. It tumbles from its alpine origins at Lake Tahoe eastward out of the Sierra through Reno and into the deserts of Nevada’s Great Basin, ending some 120 miles later in the otherworldly landscape of Pyramid Lake.

It’s toward the end of its journey that the river was dramatically impacted by humans trying to do a good thing. Following the best thinking in the 1960s, the federal government, working to alleviate flooding that regularly submerges parts of the Reno area, altered a natural, sinuous river system into what was essentially a straight-shot drainage ditch.

That attempt at engineered flood control turned the river’s ecosystem on its head. The Truckee became prone to damaging erosion. Thick forests of cottonwood trees and willows disappeared, as did once-plentiful fish and wildlife. Invading weeds took over an imperiled landscape. The river’s water quality diminished as levels of nitrogen and phosphorus rose because the vegetation normally filtering those materials out of the water disappeared.

“It was dramatic what happened down here,” says Mickey Hazelwood, Truckee River project manager for the Nature Conservancy, the group spearheading efforts to restore the lower river.

“It was a sick river,” Hazelwood says. “It was a broken system.”

In the 1990s the Nature Conservancy joined other interested parties—including the federal government, the Pyramid Lake Paiute Tribe, State of Nevada and the cities of Reno and Sparks—in serious discussions over ways to restore health to an ailing Truckee River.

Those talks led to action in 2002, when the conservancy purchased a portion of the historic McCarran Ranch, the spot where Nevada’s iconic U.S. Senator Patrick McCarran was raised as a child. It was there that work began on a pilot project designed to demonstrate how the river, given proper attention, could return to something close to its natural state.

That early work spread to other places, including the former site of the infamous Mustang Ranch, Nevada’s first legal bordello. Other projects were built near the community of Lockwood, at the 102 Ranch near the sprawling Tahoe-Reno Industrial Center and near the Tracy power plant.

In all, more than ten miles of mostly contiguous riverfront property, more than 600 acres, was restored over the last 14 years. Work completed thus far has cost about $25 million in federal, state and local funds, with that amount expected to swell to some $30 million over the next few years. 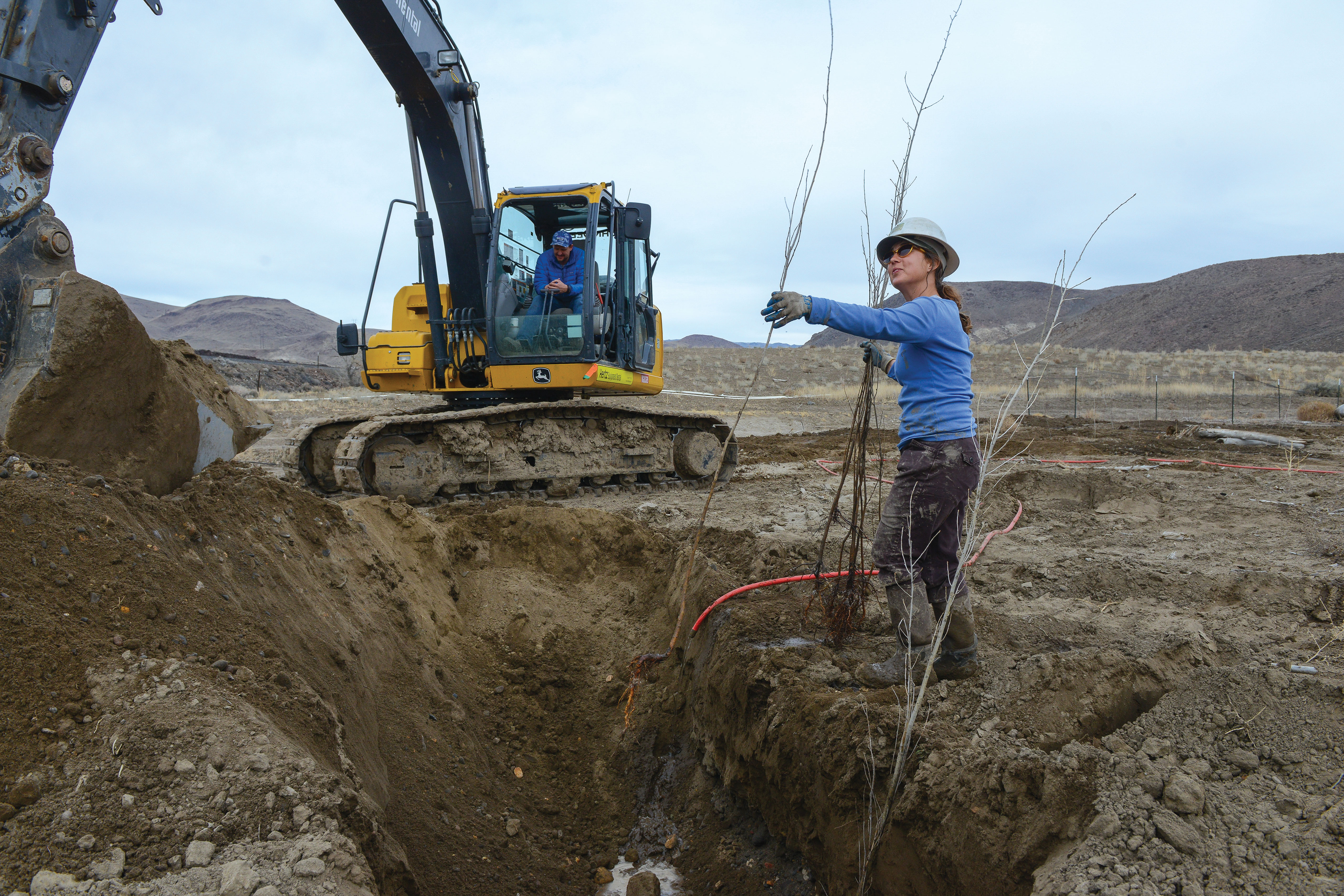 Working for the Nature Conservancy, Lori Leonard and Chris Sega plant cottonwood trees in McCarran Ranch near the Truckee River. The
fast-growing trees are harvested from other areas of the restored river, which serves as a nursery for the project, photo by Tim Dunn

In places, heavy equipment carved out new, sinuous river channels. There, the river is reconnected to its natural floodplain, allowing water to spill out over the land during floods and high runoff events. Cottonwoods, willows and native shrubs were planted, and wetlands and ponds—so critical to wildlife—were brought back. Rocks and gravel were hauled to areas and deposited in the riverbed to provide rapids and riffles needed for a healthy fish population. Most restoration areas—previously private property and off-limits—are now open to the public and are available for hiking, biking, fishing and rafting.

Bird populations are up, and some varieties not seen in the area for many years can now be spotted on a regular basis. One example is the yellow warbler, a bird highly dependent on riparian river vegetation that all but vanished after the U.S. Army Corps of Engineers channelized the river for flood control purposes more than 50 years ago. The bird is now back along the lower river in healthy numbers, says Elisabeth Ammon, executive director of the Great Basin Bird Observatory. 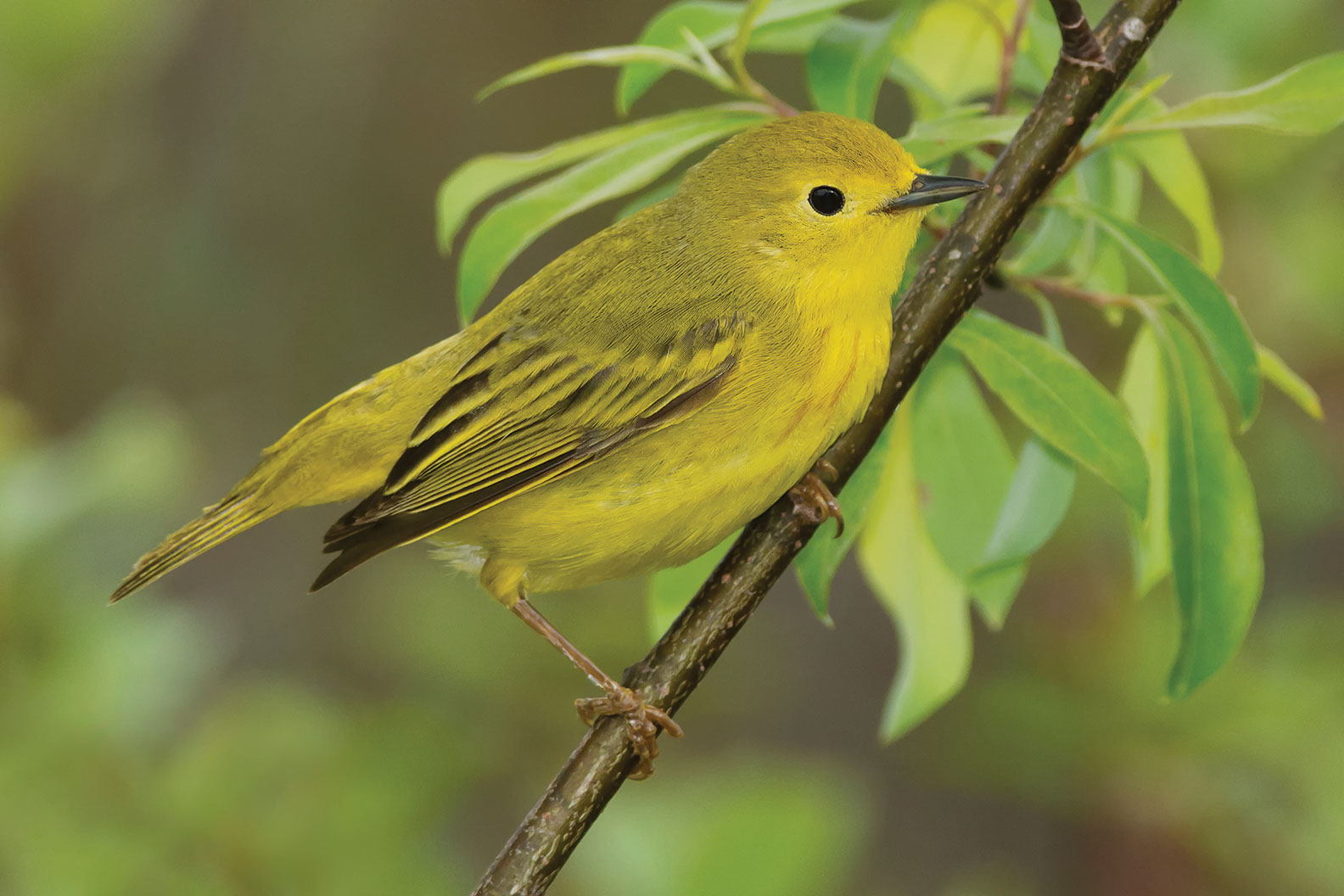 Another bird now frequenting the Truckee is the common nighthawk, which has “returned in a big way” to the restored McCarran Ranch area, Ammon says.

“They are coming back. That’s something we really didn’t expect to happen,” she says.

Ammon and colleagues remain on the lookout for yellow-billed cuckoos, which disappeared when the river was altered but have a reputation for responding well when large sections of disturbed habitat are restored. 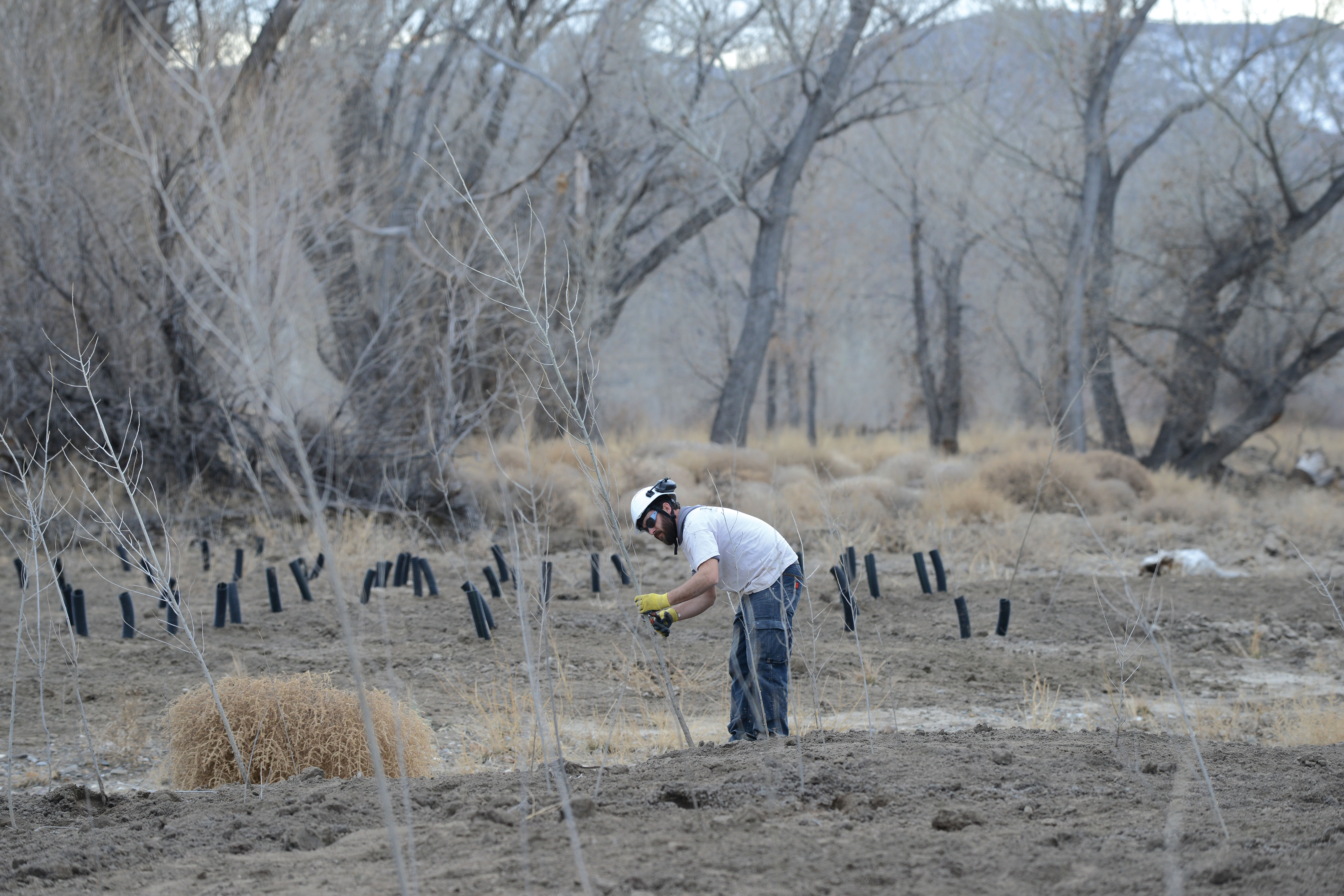 Anthony Murray prunes newly planted cottonwood trees on the historic McCarran Ranch east of Reno/Sparks. Murray is an employee for
Haymond Horticulture under contract to the Nature Conservancy, photo by Tim Dunn 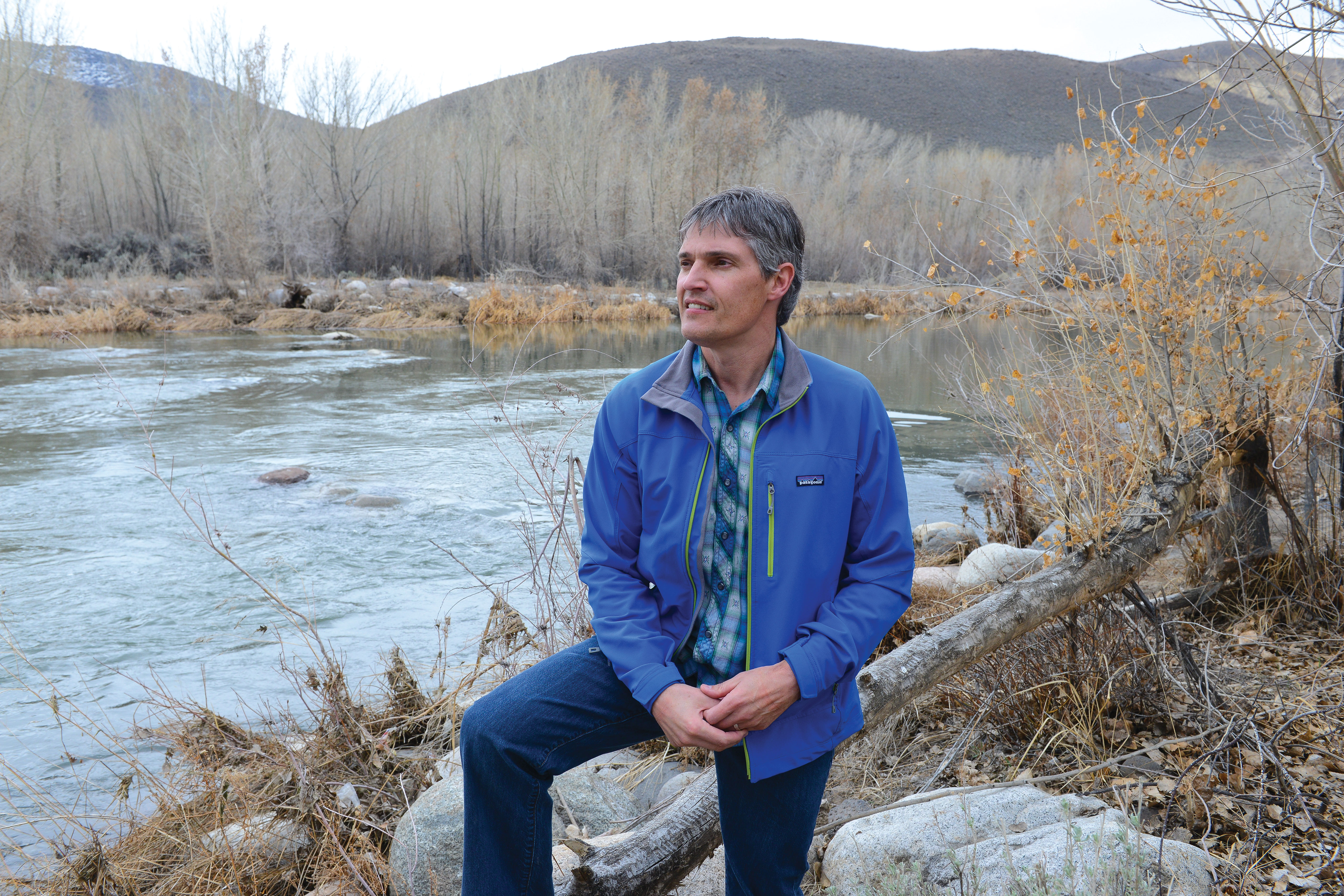 Mickey Hazelwood, Truckee River project manager for the Nature Conservancy, on the river at the historic McCarran Ranch down river from Sparks, Nevada. Rocks, boulders and gravel have been brought in to create better fish habitat, making the Truckee in this area an increasingly popular destination for trout fishermen, photo by Tim Dunn

Fish are doing decidedly well, too, according to anglers and biologists.

In the river’s previous state, water temperatures fluctuated widely and prevented the establishment of healthy, reproducing populations of popular sport fish such as brown and rainbow trout now commonly found in the restoration areas, says Travis Hawks, fisheries biologist for the Nevada Department of Wildlife.

“You can see it,” Hawks says. “Before, there would be maybe a handful of trout down there. Now, we’ve been seeing older-class fish, really large browns and rainbows.

“They’re completing a full life cycle down there now,” Hawks says. “It shows all the work they’ve completed is a huge success from a fishery’s standpoint. It’s awesome.”

“Awesome” is the word, says Spanish Springs resident Ross Smith, who fished the area of the Mustang Ranch restoration project several times in late January and in February. He and companions pulled out a number of big fish, including a 23-inch, five-pound brown trout.

“We were only skunked once,” Smith says. “Every time we’ve gone we’ve gotten at least one fish and these are some pretty decent-sized fish.”

Reno resident Doug Ouellette has fished the Truckee River for 40 years. When river flows are good, he does it just about daily.

Before major restoration began, the lower-river habitat for fish “was broken down severely,” Ouellette says.

“Before, [fishing] was spotty at best. The habitat just wasn’t there. It wasn’t very good at all.”

Improvements made, including installation of boulders and gravel, produced all the difference in the world, he says, noting the presence of mountain whitefish now found in the restoration area is a key indicator of just how much things have changed.

“Now, it’s really much better,” Ouellette says of the area, which is highly popular to anglers. “It’s greatly enhanced the habitat. They’ve made the fishery really good.”

Further downstream, where the river empties into Pyramid Lake, there’s another promising development. After decades of work by federal biologists and the Pyramid Lake Paiute Tribe to restore Lahontan cutthroat trout—which disappeared from Pyramid Lake in 1944 due to overfishing, habitat destruction and the introduction of non-native competitors—the fish are successfully spawning up the lower river for the first time since 1938.

The native Pilot Peak strain of Lahontan cutthroats was introduced into Pyramid Lake in 2006, joining a separate strain stocked by the tribe since the 1970s. Anglers at Pyramid Lake have been landing hefty Pilot Peak cutthroats in recent years, some in the 25-pound range.

Pilot Peak cutthroats were first noticed spawning naturally up the lower river in spring 2014. They returned in spring 2015, with the U.S. Fish and Wildlife Service counting 85 adult fish swimming upstream from the lake to dig spawning nests as far as three miles upriver. The agency documented about 1,000 newly hatched baby cutthroats swimming in the river but suspect tens of thousands more may have hatched in what was enthusiastically described as a long-awaited “wild reproductive event.”

Two successful spawns were deemed remarkable in part due to a drought that lessened river flows far below normal levels, mounting a challenge for the fish. Flows are still expected to be low this spring, but again experts are expecting a successful spawn of the world’s largest inland cutthroat trout.

“We do expect to see some cutthroats coming up soon,” says Lisa Heki, complex manager of U.S. Fish and Wildlife’s Lahontan National Fish Hatchery, where Pilot Peak cutthroats were raised prior to their Pyramid Lake release.

Heki described the spawn as one of the most exciting events in her career as a fisheries biologist.

“To see them coming back to reproduce naturally in their home waters is really remarkable,” Heki says. “They are back and now naturally reproducing. It’s just a remarkable conservation story.” 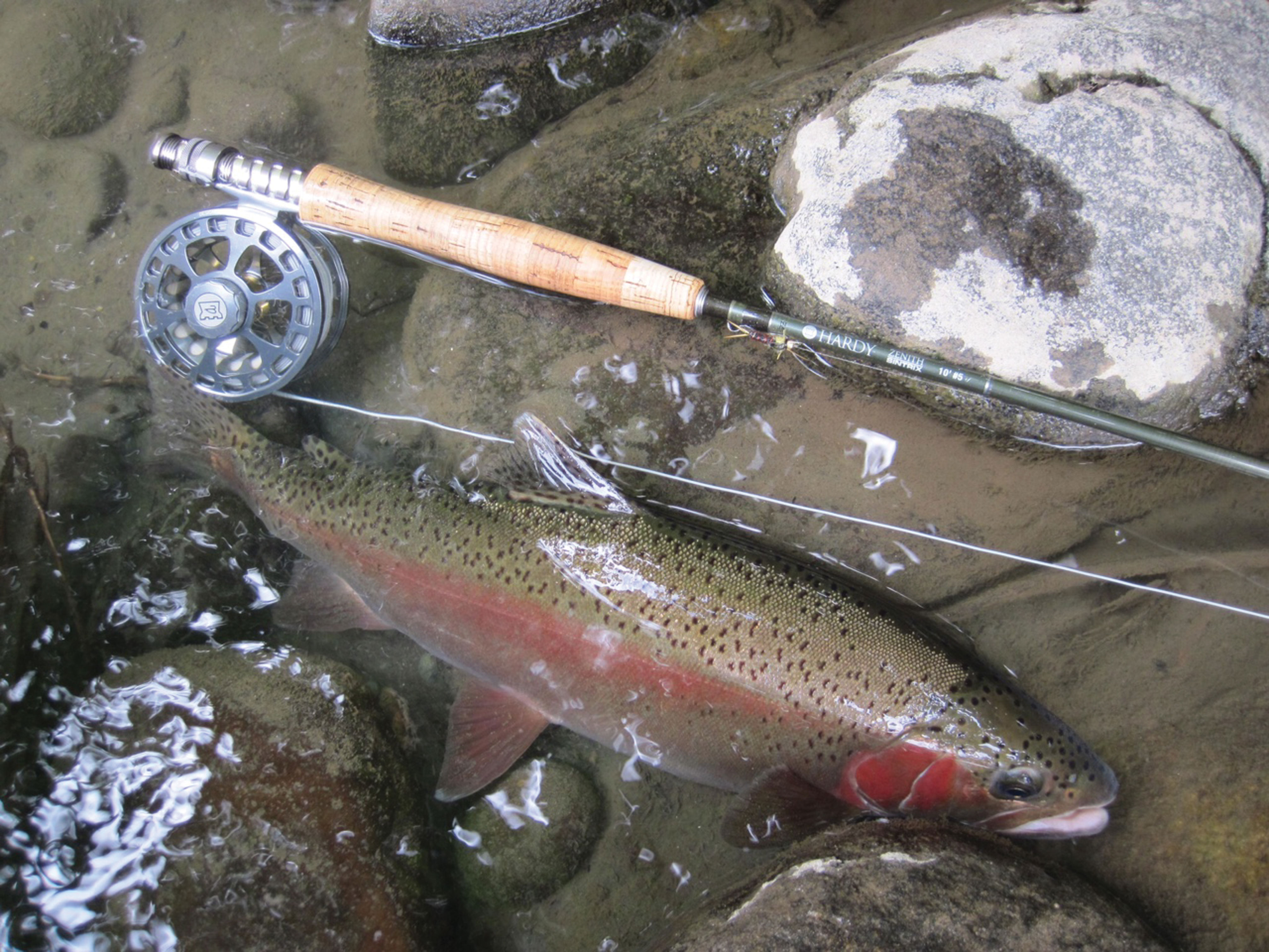 A wild trout caught in the stretch of the Truckee renovated by the Nature Conservancy, photo by Doug Ouellette

Standing beside the river at McCarran Ranch one February afternoon, the Nature Conservancy’s Hazelwood regarded a place transformed.

Just a decade ago, in 2006, the river surged through its newly dug and re-routed channel. It was a stark landscape of freshly turned earth and barren rocks, to a large degree devoid of trees and other vegetation. Reborn, perhaps, but raw.

Time has softened the place. The river flows gracefully through groves of willows and cottonwood trees, bare in winter but about to turn green with the life of spring. The river’s waters gurgle noisily through rocks in a healthy whitewater dance.

And if all these changes are good for fish and wildlife, good for recreation and good for the land, there is undeniably a spiritual element as well.

“It is moving,” Hazelwood says. “Rivers are resilient. You give them a little help and they take off.

“It is becoming what it used to be.” 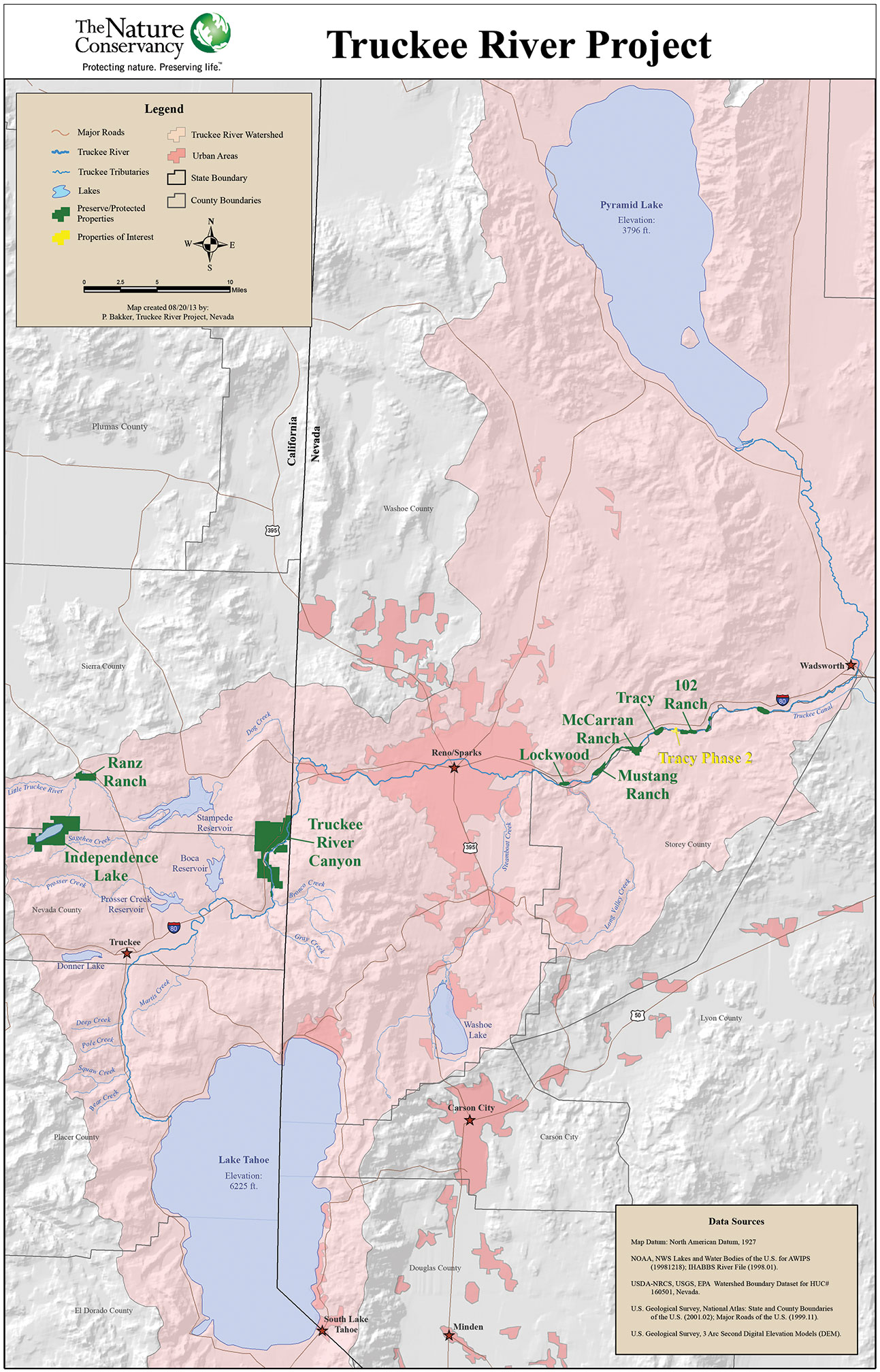