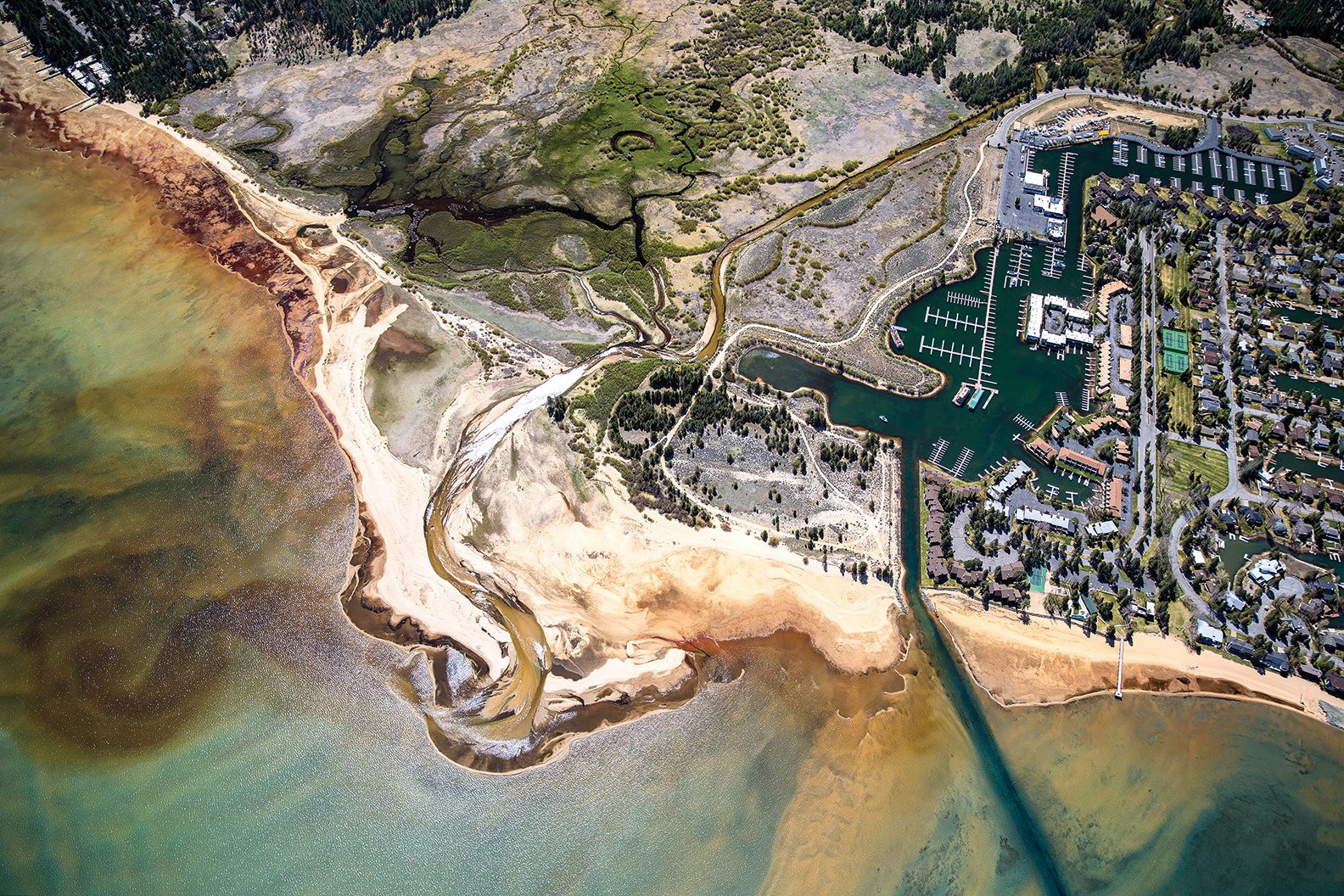 Set for completion this fall, the Upper Truckee Marsh Restoration Project seeks to undo the environmental damage created by the Tahoe Keys

In the decades since the Tahoe Keys housing development in South Lake Tahoe was built on sensitive marshland, it has vexed environmentalists as a problem without an easy solution.

The 250-plus-acre area, which once acted as a sort of filter for the meandering Upper Truckee River before it enters Lake Tahoe, was turned virtually overnight from a vibrant ecosystem full of native animals and plants to a breeding ground for invasive species that are believed to contribute to a decline in the lake’s famed clarity.

Now, organizations seeking to reinstitute ecological equilibrium to this area are making headway on an ambitious project they hope, at least partially, will restore some of the vital marshland that was lost.

Working Toward a Long-Awaited Fix

Work began in 2020 and is expected to conclude this fall on a large-scale restoration of the Upper Truckee Marsh, an area that was excavated and denuded in the 1950s and ’60s to cut the channels that would become a 1,500-plus-home development, marina and commercial strip center.

In addition to the removal of sensitive marshland, the development of the Keys rerouted and straightened the Upper Truckee River, cutting off an important network of channels to the remaining marsh area that delivered water during spring runoff. Environmental scientists who study the lake’s ecology have long pointed to the development of the Keys as a seminal pivot point, when a cascade of symptoms of environmental degradation began. 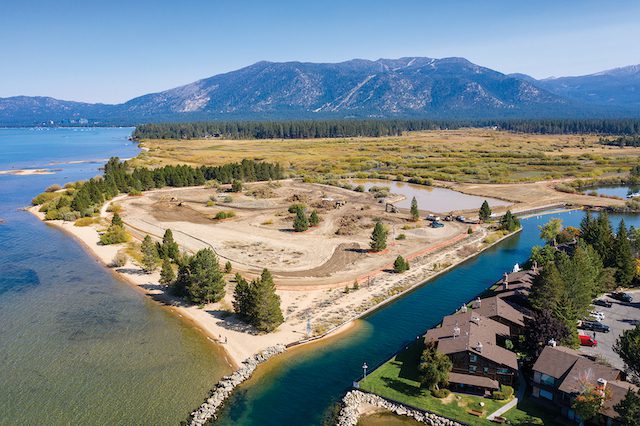 An aerial image shows progress in the California Tahoe Conservancy’s work to remove fill from planned, but never completed, development adjacent to the Tahoe Keys. The fill was used to transform an artificial lagoon back into a wetland. Work in this area will result in 12 acres of restored wetlands that had been lost to development, photo courtesy California Tahoe Conservancy

The restoration project, devised and managed by the California Tahoe Conservancy, will restart a natural process that was lost when the annual ebb and flow of snow runoff to the meadow nurtured a robust ecosystem for wetland plants and a wide variety of animals, while serving as a stopover for migrating birds and an annual nesting ground for others.

“One of the main goals is to expand the sensitive habitats that we lost,” says Stuart Roll, senior environmental scientist for the California Tahoe Conservancy.

In addition to reinstating some of the natural flow of the river—and creating and reactivating channels to direct water into the former marshland—the project includes a grading operation to restore 12 acres of wetland by the Tahoe Keys Marina. In this area the conservancy removed 9 acres of fill and refilled a 3-acre arm of open-water marina known as the “Sailing Lagoon,” making it part of the contiguous, active marsh, as it was before it was excavated to create a boating channel.

“Rewetting the marsh means better vegetation,” Roll says, adding that species like the willow flycatcher (an endangered migrating bird) are dependent on water integration. “It builds habitat, and makes the land more stable and less erosive, including the channel where water flows.”

Although the Keys have long been the subject of environmentalists’ ire, an environmental impact report completed in 2015 offered the best holistic set of solutions available, short of undoing the development.

The study, undertaken by the California Tahoe Conservancy, Tahoe Regional Planning Agency, Bureau of Reclamation and the California Department of General Services, outlines the goals and priorities for various restoration options, including reinstating the natural river flow and floodplains processes; restoring and enhancing natural fish and wildlife habitats; improving water quality through physical and biological processes; and protecting and expanding Tahoe yellow cress populations (a rare plant found only on the shores of Lake Tahoe). The report also prioritizes protection of nearby private property from increased flood risk and maintaining public access while preserving cultural and historical elements.

The study area comprised approximately 592 acres, stretching from where the Keys development meets the lake, south to the Highway 50 boundary and from the Highland Woods and Al Tahoe neighborhoods to the west and east. It provides one of the most comprehensive understandings of the type of work that is needed to reverse the Keys’ environmental problems related to the development.

“Looking back to before it was developed, the marsh had a pretty big network of historic channels,” Roll says. The study provided a forensic mapping of historic channels, giving scientists a view of the natural water flow in the marsh. “One of the ways to get water out there [to reestablish the marsh] is to dig new channels. The main objective there was to rewet the middle of the marsh.”

It is a partial solution. The dredged channels between the network of streets that are part of the homeowners association continue to pose their own environmental challenges, including providing ideal habitat for Eurasian milfoil, an invasive aquatic weed. Despite decades of various interventions, the milfoil endures, thriving in the warm, nutrient-rich water, clogging the Keys waterways.

The hope is that restoration of the Upper Truckee Marsh will provide at least a measure of respite from the unnatural environmental processes that persist.

“The restoration is good for vegetation, which in turn makes it more resistant to climate change and more resilient to other events, like bigger floods,” Roll says. “From a water quality perspective, a healthy marsh will retain sediment that impacts water clarity.”

The filling of the lagoon, which is the most visible change, used dirt excavated near the site. “We had an area that needed removal, and a new area that needed fill. It kind of worked out perfectly. It’s all essentially native soils,” Roll says.

Before the initial development of the area, the original marsh, including an area then known as Rowlands Marsh, covered approximately 1,600 acres, some of which was used as horse and cattle pasture. The restoration project will enhance some 250 acres in addition to the 12 acres of wetland that was reestablished.

Will Richardson, a wildlife biologist and executive director of the Tahoe Institute for Natural Science, sees potential for the restoration project to provide habitat vital to different species that were effectively displaced over the decades.

“When it happened, [the Tahoe Keys] was a huge disruption to the native wetland processes,” Richardson says. “What the marsh provided, in terms of habitat, there’s nothing like it in the Sierra Nevada. 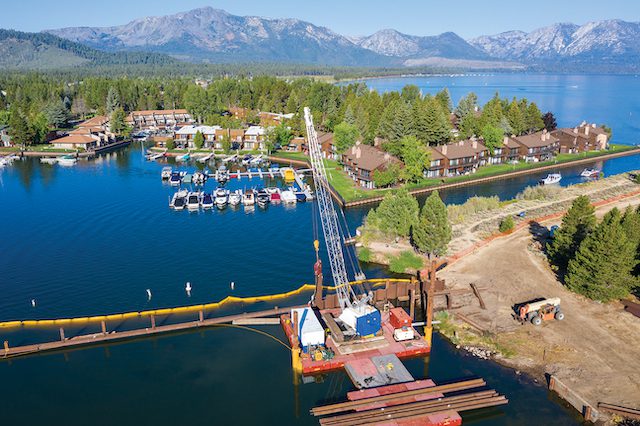 “There is complex of diverse, finer-scale habitat within that habitat system, and it attracted all kinds of shorebirds and species that used to be there. Some still drop in, but not like it used to be. There are quite a few species that were there in big numbers. Black terns, which are a California species of special concern, nested there, along with bitterns and others.”

Richardson is careful to point out that Lake Tahoe has a fraught history with non-native species that precedes large-scale development, some of which were introduced to create fisheries or even to control the populations of other species. Beavers, for example, which preceded white settlement, were wiped out and then reintroduced where they are now active near the Keys.

“A lot of these names go back to pre-extirpation. The Washoe (the native inhabitants of the Tahoe area) have a word for beaver,” he says. “They got wiped out. A lot of the old-school wildlife biologists have a hard time believing beavers have a place in the wildlife habitat. But beavers are a very cost-effective solution to a lot of wetland and riparian restoration problems.”

With a return to the natural processes that are inherent in marsh ecosystems, the hope is that more of the degradation to lake clarity can be headed off before it starts, by trapping nutrients that feed algal blooms and the proliferation of Eurasian milfoil. For two decades, various methods have been employed to eradicate the milfoil, including mechanical extraction using specialized barges and human power.

Homeowners in the Keys spend approximately $400,000 annually on the effort, removing a purported 10,000 cubic yards a year, but the physical structure of the keys is a perfect breeding ground. The 10-foot-deep channels are like a greenhouse, and during the height of the growing season, the milfoil can gain up to a foot of growth in a day. Eradication programs barely keep up with the problem.

During the warm periods, boats can be seen chugging up and down the channels daily, navigating between weed-choked boat docks, harvesting the green muck onto conveyors with a combine-like device and depositing it on a platform to be trucked away. Further, the habitat engendered by the aquatic weeds invites all manner of other invasive species, the most peculiar of which is goldfish, which have become a frustrating symbol of how ecologically disturbed this area has become.

Other methods employed by the homeowners association include aeration and bubblers, and bottom barriers that blanket the lakebed to snuff out new growth. A controversial program to use herbicide, approved by the Tahoe Regional Planning Agency and Lahontan Water Control Board, is being tested this year to determine if it is an effective, safe tool to dispatch milfoil and other aquatic weeds.

As these and other efforts continue, environmental scientists remain hopeful for the future of the marsh and its performance as an environmental gatekeeper for the lake’s largest source of water. When the $11.5 million project concludes this fall, a scientific advisory committee will monitor changes, with the hope that turning back the hands of time will help promote clearer waters in Lake Tahoe’s future.

Jim Scripps is a Reno-based writer and professor of journalism at Sierra Nevada University in Incline Village.