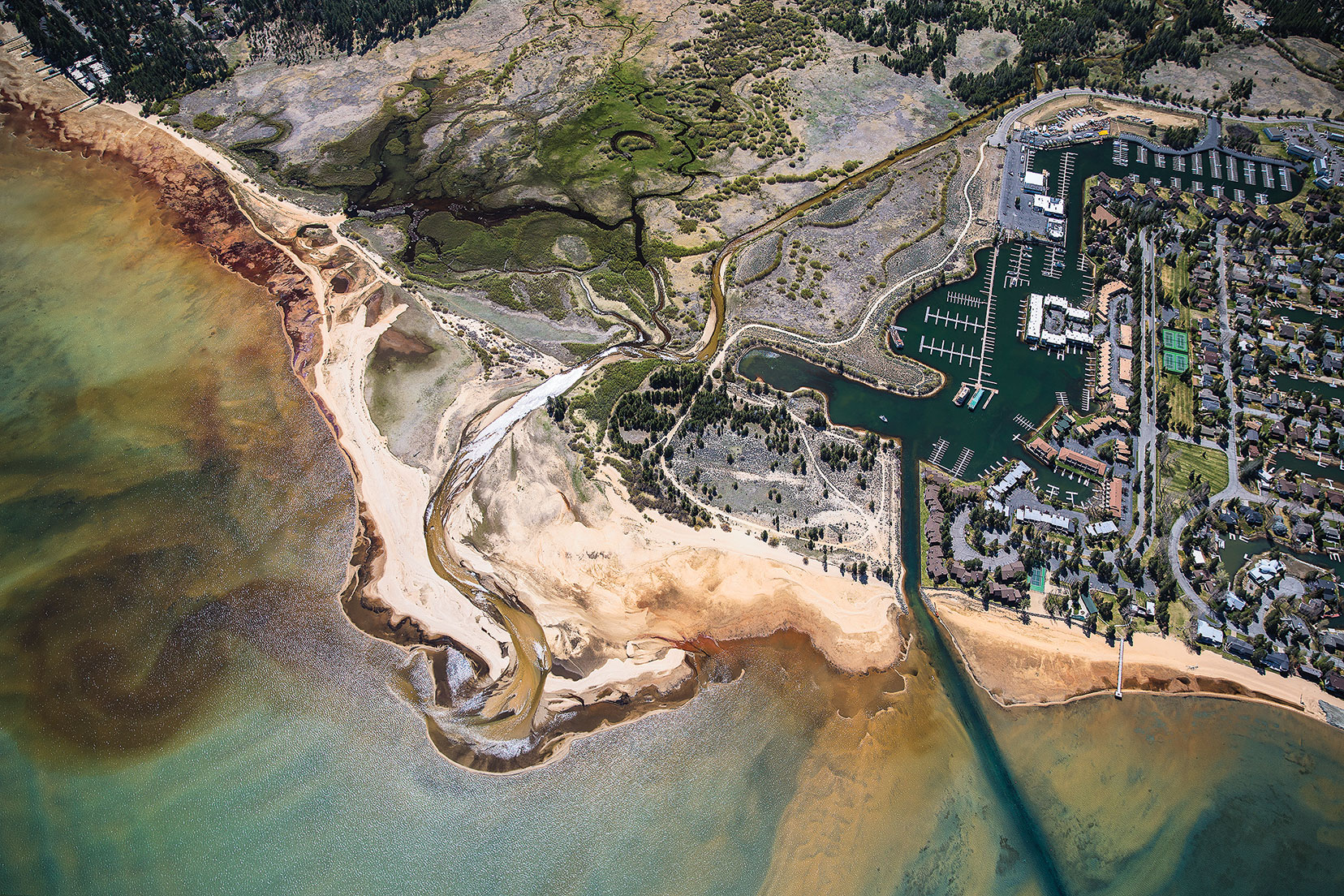 in Best of Tahoe 2016 | Environment | Written by Kyle Magin

In Tahoe Keys, the symptoms have won the headlines. Specifically, the giant, released pet goldfishes and other warm-water fish species who now call the shallow 172-acre manmade body of water home. They’re weird, non-native and photogenic.

It’s the disease—and debated treatment—though, that have garnered attention recently. Nearly 90 percent of the volume of the 400,000 acre-feet of keys, channels and lagoons in the 1,500-plus home South Lake Tahoe neighborhood fills with aquatic weeds in the summer, both invasive and non-invasive species. Keys homeowners, scientists and Lake Tahoe’s water purveyors differ on the best way to deal with the situation, however.

A growing trend since the 1980s, the warm waters of the 8 to 15-feet-deep Keys acts as an incubator for the weeds—invasive species including curly-leaf pondweed and Eurasian milfoil along with native coontail—which in turn warm the waters more, making a better habitat for more weeds as well as invasive, warm-water fish species like goldfish, bluegill and bass, scientists say. 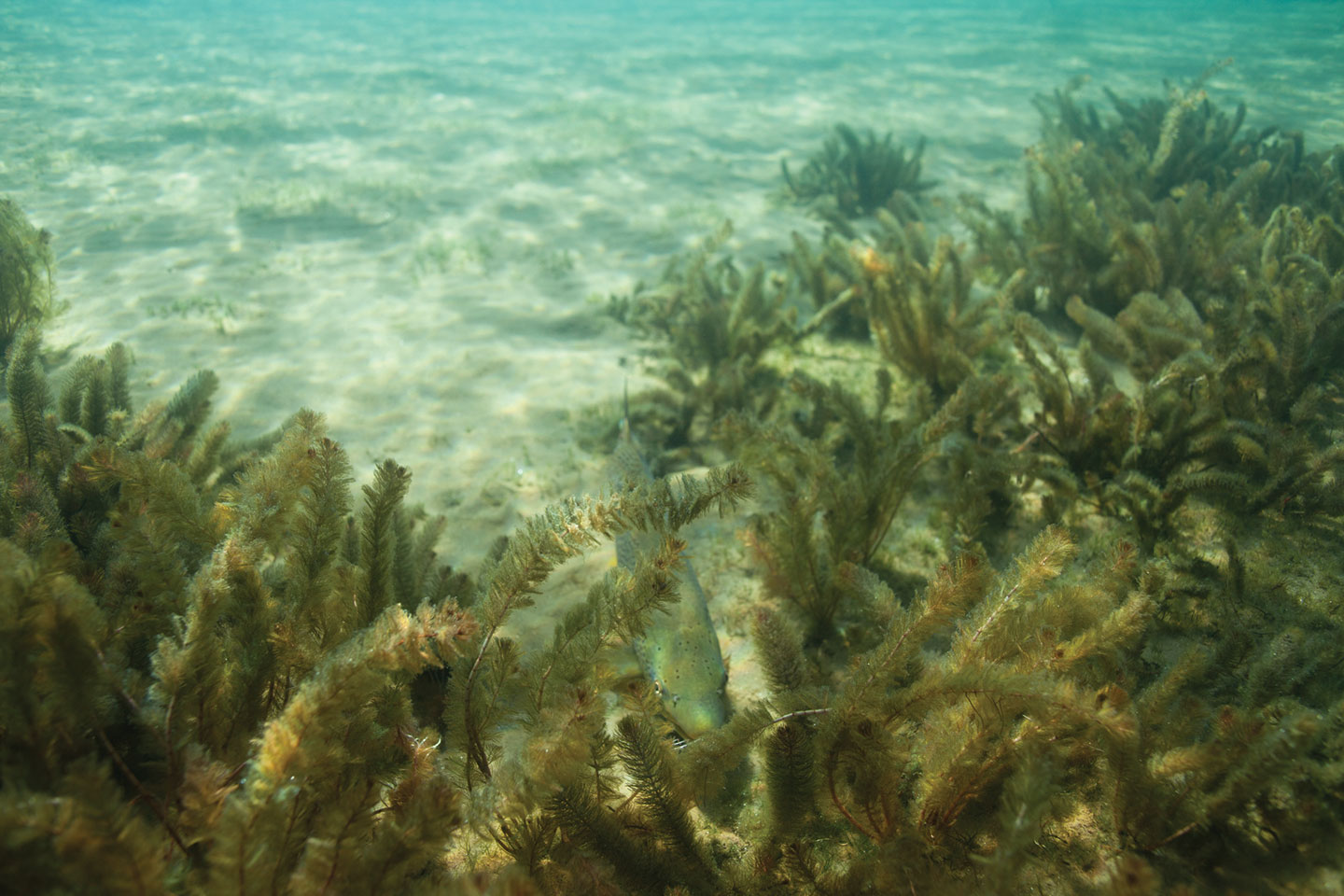 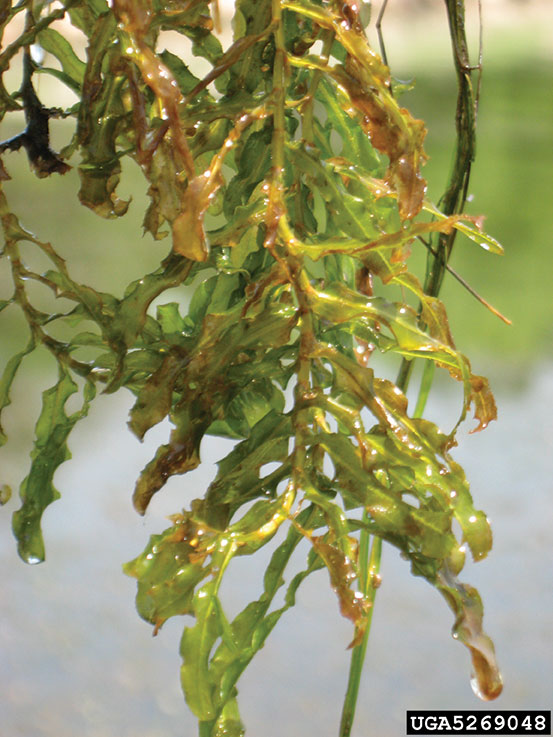 “It’s gotten worse since 2006,” says John Larson, president of the board of directors of the Tahoe Keys Property Owners Association. “It takes a full-time harvesting operation during the growing season just to keep up with the new growth.”

Weeds clog boat motors, make swimming in the Keys unpleasant and provide a breeding ground for the aforementioned invasive fish, which in turn outcompete some native species. They also could proliferate to other places around Lake Tahoe, researchers say.

Keys homeowners spend up to $400,000 annually to cut the weeds down. Last year, they employed teams of boaters and divers to remove 20,000 cubic yards of vegetation, Larson says. The problem has exploded to such a point—the weeds can grow up to a foot a day in the summer and fragments of cut weeds can re-grow elsewhere—that the Tahoe Keys homeowners last year spent $280,000 on preparing a draft Integrated Weed Management Plan (IWMP) to submit to the Lahontan Regional Water Quality Control Board (which regulates Lake Tahoe) to lay out their plan to manage the problem. With an eye toward reducing the volume of weeds by 80 to 90 percent, the draft document listed a number of mechanical processes to remove weeds—continued harvesting by boats and divers and laying down mats (a successful approach in Emerald Bay) to smother the weeds—as well as the use of herbicides. The potential use of herbicides has caused no small amount of concern. It’s the reason Keys homeowners asked for an extension on their final IWMP—stakeholders and Lahontan officials expressed strong reservations over the use of chemical treatments in Lake Tahoe’s famously clean water.

“We are opposed, as an organization, to the use of herbicides except as a matter of last resort,” says Madonna Dunbar, the executive director of the Tahoe Water Suppliers Association (TWSA), a group made up of the 11 major municipal water suppliers surrounding Lake Tahoe. Maintaining the quality of Lake Tahoe’s drinking water is a major concern for the group—the tiny East Shore hamlet of Glenbrook won the “Best Tasting Water in the USA” award from the Rural Water Association—and six of their members own a coveted filtration exemption from the EPA, a federal designation given out to just 60 water suppliers nationally and which conveys a federal seal of approval for safety on its owners.

In response to the comments, the Keys homeowners went back to the drawing board with the IWMP; they plan to submit an amended plan in May without the use of herbicides, but the battle is far from over.

“We need to use all the tools that are out there,” says Lars Anderson, a former U.S. Department of Agriculture researcher who is working as a consultant for the Keys homeowners. He says to really get the weed problem under control, “at least for the first few years” herbicides have to be integrated into the IWMP.

With the use of herbicides—the draft plan named imazamox and penoxsulam, among others—Keys property owners can take a serious bite out of the volume of the weeds, leaving behind a more manageable population to maintain, Anderson says. That massive reduction is probably not possible with mechanical methods, he adds. Cost is a factor, too. Estimates have ranged close to $100 million to lay down enough mats to cover the Keys’ 172 acres, Larson says. The property owners have thus far bore most of the costs for weed removal on their own.

Keys homeowners plan to undertake targeted trials with some of the herbicides, possibly in 2017, and potentially submit another updated IWMP with herbicides as part of the regimen next year, Larson says. The use of herbicides has some major backers, including University of Nevada, Reno, Lake Tahoe researcher Sudeep Chandra.

An engineer, Larson describes himself as a cynic regarding the use of herbicides, but mentions all the chemicals put forth in the draft IWMP were approved and considered safe by the EPA.

“We are going to the Nth degree to protect the water and The Lake and the people and the critters,” Larson says. “The trial’s important because it will answer so many questions. Are the herbicides effective? Can they be controlled and monitored? It’s so important to our board and homeowners to protect all the folks who use The Lake for drinking water.”

“We work so hard to keep so many things out of The Lake, we’ve spent billions transporting our sewage out of the Basin,” Dunbar says. “We need to be more creative in dealing with this problem. The [Keys homeowners] need to exhaust all the mechanical options before even considering herbicides.”

Herbicides can be far more cost-effective than mechanical methods and hand-pulling, though, which can increase their allure, Dunbar adds. But, there’s hesitancy on behalf of the water purveyors to sign off on their use because of their potential impacts on water quality, which could in turn push millions of dollars in costs onto the municipalities to upgrade their water treatment systems, Dunbar says.

Both sides, though, share a concern that the Keys’ problem, left unchecked, could serve as a breeding ground for even more frightening invasive species—quagga and zebra mussels, which could proliferate into The Lake with more ease than the warm water-loving weeds. Each is calling for state or federal financial assistance to attack the issue. The disease needs a cure, but for now, there isn’t an agreement on exactly what.