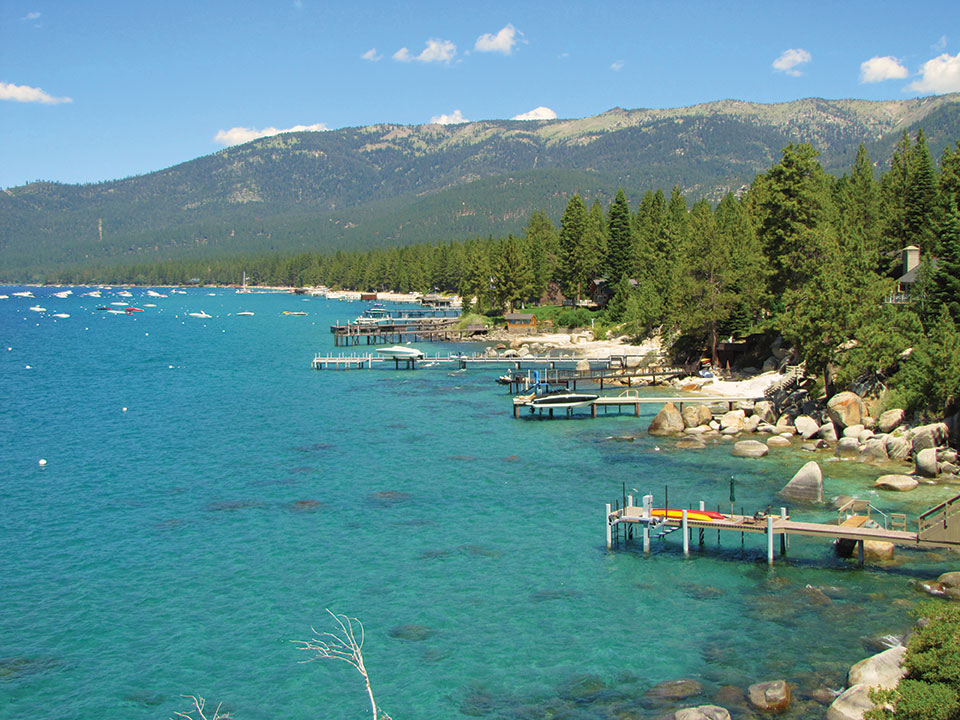 in Best of Tahoe 2014 | Environment | Written by Greyson Howard

Ask an average Tahoe local or well-versed visitor how scientists track Lake Tahoe’s legendary water clarity and they might know about a white disk lowered into The Lake to the point where it can no longer be seen.

Called a Secchi disk, the exercise has been invaluable in tracking Tahoe’s progress back toward historic clarity levels, but it’s not always helpful in figuring out where problems originate.

Middle-of-The-Lake readings do not relate to the health of the water where most residents and visitors splash and play, either.

With this in mind, members of the Tahoe scientific community—Reno’s Desert Research Institute (DRI), UC Davis’s Tahoe Environmental Research Center (TERC) and University of Nevada, Reno (UNR)—collaborated to create and present a comprehensive 83-page report detailing both the present and historical conditions of the nearshore, factors leading to the apparent deterioration in nearshore zone clarity and the gaps and deficiencies in monitoring and studying the vital portion of Lake Tahoe.

“We’ve been looking at the nearshore for a while now, and we’ve said, ‘this is something we haven’t studied in an integrated way,’” says DRI’s Dr. Alan Heyvaert, who is the lead scientist for the Nearshore Science Team (NeST). “This is where people play, where they get down to The Lake; it’s the part the most people interact with.”

The nearshore not only functions as the epicenter for much of the recreational activities on Lake Tahoe, but also provides a vibrant ecosystem for a slice of Lake Tahoe’s endemic biota.

In October 2013, Heyvaert and the rest of NeST presented the report—entitled “Lake Tahoe Nearshore Evaluation and Monitoring Framework”—to the Tahoe Regional Planning Agency (TRPA) governing board in the hopes of providing the Tahoe Basin’s principal management agency with new and better information upon which to base future decisions.

“For monitoring and assessment purposes, the report defines ‘nearshore’ as the zone from the low-water elevation (6,223 feet), or the current shoreline, to the mid-summer thermocline, which has a depth of approximately 69 feet, and at minimum a distance of 350 feet from shore,” Heyvaert explains.

Once the criteria for nearshore was sharply defined, the participating scientific agencies set about incorporating the disparate studies and the considerable compendium of data into a more unified vision of how the nearshore operated and what was causing a depreciation in its clarity.

The report—funded in 2010 during Round 10 of the Southern Nevada Public Land Management Act, which funnels proceeds from public land sales in Southern Nevada to land-use research and projects throughout the state—started with a multi-year study to assess and critique existing information on the nearshore zone, Heyvaert says. Scientists dug back through intermittent studies dating to the 1920s.

The data collected would then be able to formulate a proposed future monitoring plan for Tahoe’s nearshore, says TERC director Geoffrey Schladow.

“The Tahoe Regional Planning Agency wanted the best information possible, and the nearshore is clearly important, so we decided we needed to know both what we know and what we don’t know,” says Jeff Cowen, public information officer for the TRPA. “This is a major strategic effort for us.”

Sifting through the data was one of the big challenges in the first phase of the project, Heyvaert says.

After refining its data set, NeST sought to formulate and establish the criteria by which it would judge the health of nearshore conditions.

While much of the public policy discourse at Lake Tahoe focuses on lake clarity, due to its direct connection to human appreciation of The Lake’s aesthetic appeal and the economic ramifications of tourism dollars, trophic status has emerged in recent years as a canary in the coal mine for scientists studying Lake Tahoe.

Trophic status describes the biological productivity defined in this case by phytoplankton, green algae suspended in the water, and periphyton, the algae that makes rocks slippery.

Aquatic community structure, a specialty of UNR’s Dr. Sudeep Chandra, investigates the intercalations of organisms like fish and invertebrates.

“We do not know the composition, distribution or abundance of most macro-organisms that inhabit the nearshore,” Chandra said in a press release. “Base data are urgently needed to describe these conditions before they change any further.”

DRI’s specialty in the ongoing study will focus on clarity, says Heyvaert, defined by light transmission and turbidity, which the institute is uniquely suited for with a jet boat designed to be able to take continuous measurements while circling The Lake.

The final criterion will measure the presence of toxicity or harmful micro-organisms in The Lake. Although sewage and industrial charges are prohibited at Lake Tahoe, contamination can arise from sewage malfunctions, contaminated storm drains, pet waste or wildlife effluent.

“Our intent was to develop a new monitoring program that would allow the stakeholders in the Basin to target their funding to be as efficient as possible in protecting The Lake’s clarity,” Heyvaert says.

The ability to focus limited time and money on the projects to help The Lake is more important now than ever, Cowen says.

“We’re working with dwindling funding, so we need to be able to focus our efforts, to get the best bang for our buck, especially in the nearshore,” Cowen says. “We’ve found it’s not as simple as ‘all the pollution is from town centers’ or ‘all the algae is from urban inlets.’ The nearshore has been a mystery; we need to know more.”

The report contains specific recommendations put forward by the scientists relating to how the different criteria and metrics established by the study should be monitored going forward.

Suggestions include conducting a full perimeter survey of The Lake four times a year and testing for turbidity, transmissivity and the presence of chlorophyll and phytoplankton. NeST would also have the TRPA fund annual counts of macro-organisms, fish and crayfish.

As of this printing, those recommendations have yet to be implemented by the TRPA.

“I am hopeful that many of the recommendations will be adopted by management agencies. But they are just that—recommendations—and in order to become part of the base monitoring at Lake Tahoe, funding will be needed,” Schladow says.

Funding for monitoring can be hard to come by compared to specific restoration projects that are visible around The Lake, but without monitoring, it’s impossible to say what those projects are accomplishing, Heyvaert says.

“Sometimes agencies would rather do something visible, more tangible, with funding,” he says. “But, the two have to happen hand-in-hand to really be useful.”

“Restoration and monitoring should not be separated, but unfortunately they are. Restoration is an investment, and any prudent investor knows they have to monitor an investment,” Schladow says. “Despite the best of intentions, and application of the best knowledge, sometimes restorations don’t go as planned. It is important to know when that happens and to learn from it.”

“Over time, it would probably be less; it always costs more to start something up and figure out the base data to refine,” Heyvaert says.

It all depends on obtaining grant funding, Cowen says.

“Right now, nearshore monitoring depends on when grants become available. We will continue to try to get funding for all of our programs,” he says.

Finding that funding is critical for Tahoe, a community and an economy dependent on the environment, Heyvaert says.

“We are living in the middle of a system we need to sustain us. The Tahoe Basin is the basis of our regional economy, and we need to manage it in a way to sustain those qualities,” Heyvaert says. “This is the cost of doing business in the Tahoe Basin.”

He is hopeful a pilot monitoring program could start sometime this year, he adds.

“The nearshore program forms the basis for the interaction between science and management, and how we go forward working together,” Heyvaert says. 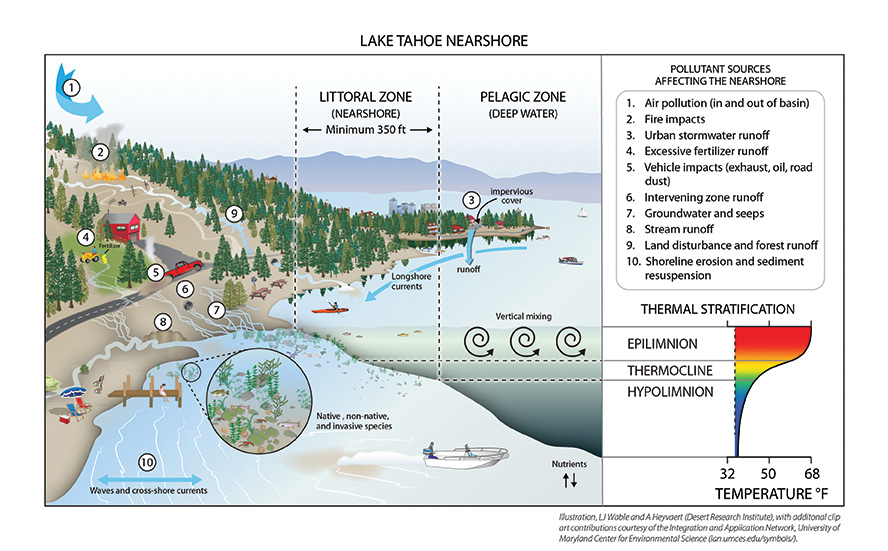 Greyson Howard is a Truckee-based writer.