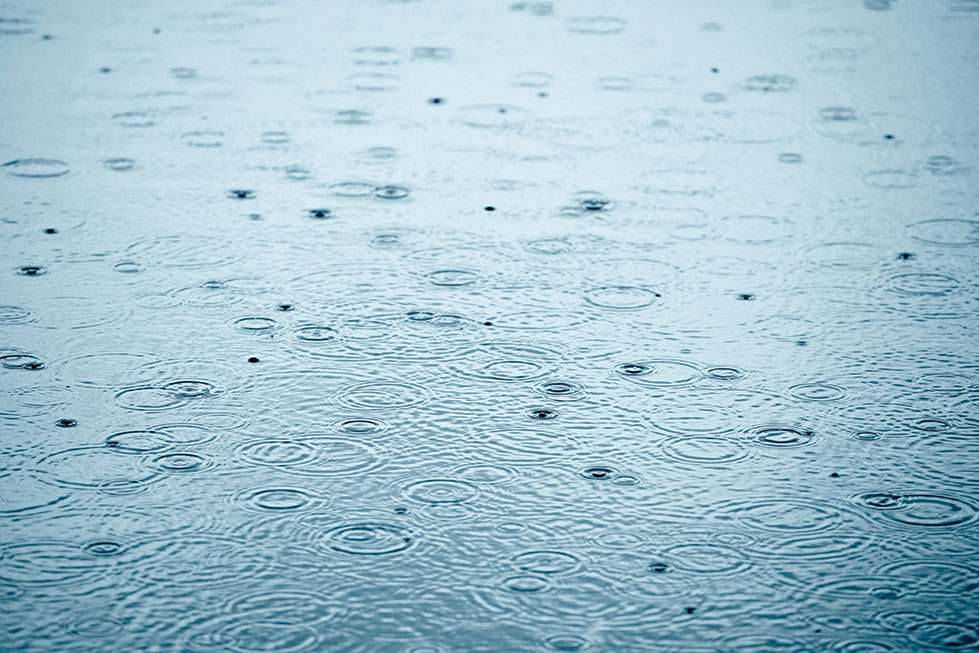 in Best of Tahoe 2015 | Environment | Written by Dylan Silver

On rainy days and as the snow melts from the mountains, Cara Moore takes to the battleground. Her fight? The war against Lake Tahoe’s clarity loss.

As dirty runoff from the area’s roads, parking lots and buildings flows toward The Lake, Moore, a Tahoe Resource Conservation District environmental scientist works like a one-woman support team. You may have seen her, dressed in colorful fatigues and high rubber boots, quietly poking around outflow pipes. She checks the complex machines gathering runoff samples. She investigates the earthen banks of the many basins filled with turbid water after a storm.

Many people don’t realize what the infrastructure is intended to do, and most people don’t even notice it, Moore says.

“A lot of the public landscaping that you look at is designed to capture and infiltrate stormwater,” Moore says. “You don’t really realize it until you learn what to look for.”

The pipes, gutters and basins Moore labors among form a web of infrastructure meant to catch and clean dirty stormwater before it reaches The Lake. This web is the first line of defense against runoff—the number one cause of clarity loss. Like any good defense, it continues to evolve.

Staff scientists at the U.C. Davis Tahoe Environmental Research Center (TERC) are studying further practices to halt more unsettled runoff from directly entering The Lake. One promising proposal, first published in the 2014 State of the Lake report, suggests installing thousands of small retention basins to better filter stormwater in a way that mimics the natural landscape. 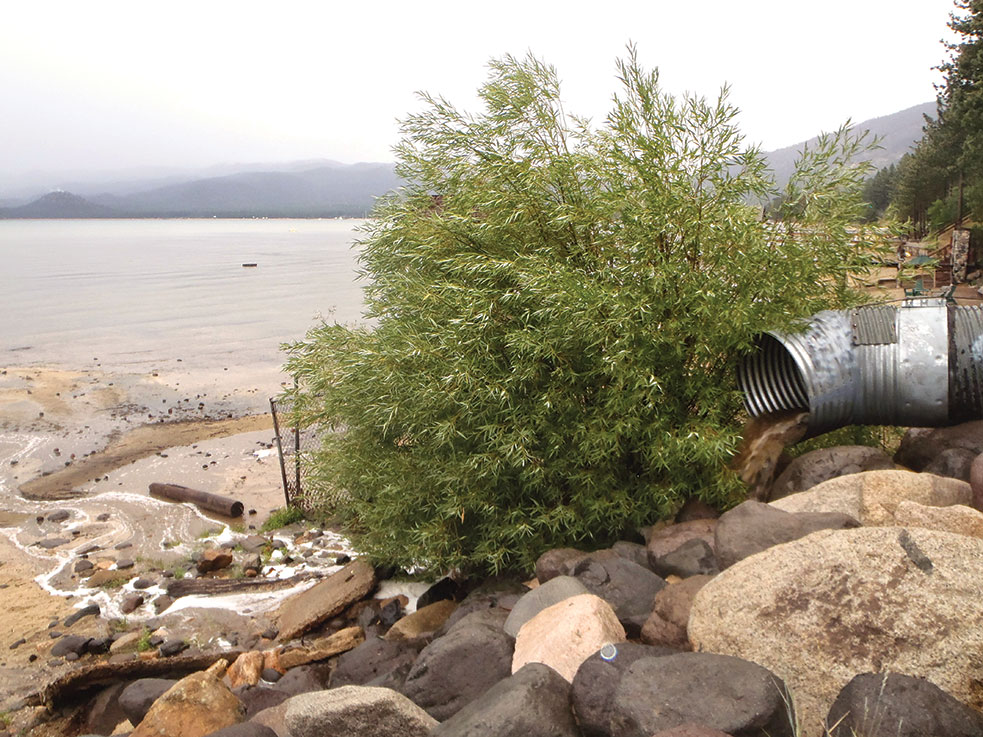 Stormwater–runoff which collects chemicals and sediments harmful to
Lake Tahoe’s famous clarity–is one of the biggest targets for cleaning by
engineers and scientists working around The Lake, photo by Dylan Silver

Lake Tahoe is what’s known as an ultra-oligotrophic lake, or a lake nearly devoid of plant life. The lack of nutrients is part of the reason the water is so clear. In addition, the surrounding watershed, the Lake Tahoe Basin, is relatively small and is made primarily of granitic soil.

Rain and snowmelt carry off little sediment and scant nutrients when running over the area’s slick granite. What matter is transported often filters out through the sandy soil, marshes or wetlands surrounding many of The Lake’s tributaries. The result is a body of water defined by its clarity.

“So singularly clear was the water that where it was only 20 or 30 feet deep the bottom was so perfectly distinct that the boat seemed floating in air. Yes, where it was even 80 feet deep,” Mark Twain wrote in Roughing It.

Unfortunately, around the time of Twain, Lake Tahoe’s famed transparency began declining. For the Comstock mines, loggers cut trees from nearly the entire shoreline. Not only did their activity muddy nearshore waters, the lack of trees allowed rain and snowmelt to easily enter The Lake.

The early logging kicked off a trend of declining clarity that eased and then began again decades later. Following a boom of development in the 1960s, clarity dropped up to a foot annually. It wasn’t until famed limnologist Charles Goldman began studying the water quality that clarity loss became a real concern. Today, the clarity hovers around 70 feet. Goldman’s first Secchi dish measurements in the 1960s averaged 102 feet.

Until that point, little had been done to curb pollution at The Lake. Sewage often sprayed or distributed directly into Tahoe. In one tragic 1968 incident, more than two million gallons of raw sewage leaked from a new plant directly into South Shore tributaries. The early stormwater infrastructure did not combat the damage being done.

As roads were paved, the only management of the rain and snowmelt was to steer it to the side to avoid flooding. Gutters and pipes directed the runoff away from the built environment. By concentrating runoff, the new groundwork only increased the capacity to carry sediment, nutrients and chemical pollution to Lake Tahoe.

“In the Tahoe Basin, stormwater infrastructure used to be drains and culverts to simply get the water off the roadways,” TERC director Geoff Schladow says. “That is still important for public safety. What has changed now is that agencies realize that something needs to be done with the stormwater to remove fine particles and the attached nutrients.”

“There wasn’t much thought given to how polluted it might be and how it might affect our waterways,” Moore says. “What we’re seeing now around the country is people are realizing this is a big source of pollution. It’s a big problem and we need to start treating it.”

The program offered quantitative reviews of stormwater management practices. Retention basins were noted as an effective method to remove sediments and many pollutants. Not long after the NURP report, the Tahoe Regional Planning Agency  (TRPA) passed a revision to its Regional Plan that required the use of best management practices, or BMPs, on developed land. Those practices included retention basins.

“They first started to appear in the late 1980s and early ’90s,” says Doug Smith, supervising engineering geologist for the Lahontan Regional Water Quality Control Board, who was working at TRPA at the time. “They were some of the first techniques used to treat stormwater.”

Now, there are thousands of measures mitigating the impacts of dirty urban runoff to The Lake. Countless BMPs have been installed on both private and public land. They take the form of grassy rain gardens, dry and wet basins, paved driveways, drains, infiltration trenches and swales. The BMPs are sometimes impossible to see, like underground infiltration chambers, or hardly noticeable, like large boulders stabilizing an eroding slope.

As an environmental scientist with the Nevada Tahoe Conservation District, Michael Pook designs and installs BMPs on the Nevada side of The Lake. Like Moore, he regularly checks up on his projects to see how they’re working. He’s seen tangible results. From one project on College Drive in Incline Village, Pook measured a 68 percent reduction in turbidity in the runoff.

Both Pook and Moore have noticed, though, there are fewer and fewer sites to establish the sort of large projects that have been completed in the past. Whether it’s negotiating with private landowners for easements or designing smaller, more intricate projects, agencies on both sides of Tahoe work under a variety of difficult conditions to install new stormwater infrastructure.

“All the easy stuff has been done,” Pook says. “We’re left with the more challenging sites now.” 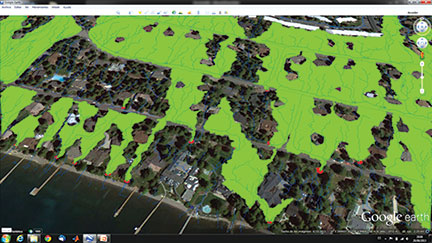 A 2010 Clean Water Act dictated that states must establish a plan to limit pollutants and restore impaired waters, such as Lake Tahoe. As part of that plan, known as the Lake Tahoe Total Maximum Daily Load (or TMDL), the goal is to bring Lake Tahoe’s clarity back to 100 feet.

Authors of the Lake Tahoe TMDL (made up of scientists from both states) found that sediment input into The Lake would need to be reduced by up to 65 percent to achieve that goal. More infrastructure is needed to capture and clean more stormwater, according to the TMDL report. And that’s where TERC’s new research comes in.

Using light detection and ranging, TERC scientists have created maps of Lake Tahoe that account for micro-topographies in the landscape. These maps allow them to determine exactly where water, down to the drop, is flowing.

“We are hoping that this can be used to create a network of micro detention basins,” Schladow says.

Where the current infrastructure is subtle, these basins would be almost invisible. But there would be a lot of them. TERC estimates this network could hold back 100 times the amount of stormwater than is currently processed through existing methods. They would also take less permitting, less effort to construct and less maintenance.

“I think it does make sense to install more of these systems,” Pook says. “These can fit into a small area and yet have a pretty big impact.”

The TERC team, along with contributing scientists, are still working to test the small basins, but, if all goes well, it could be the next step in the evolution of Lake Tahoe’s stormwater infrastructure.