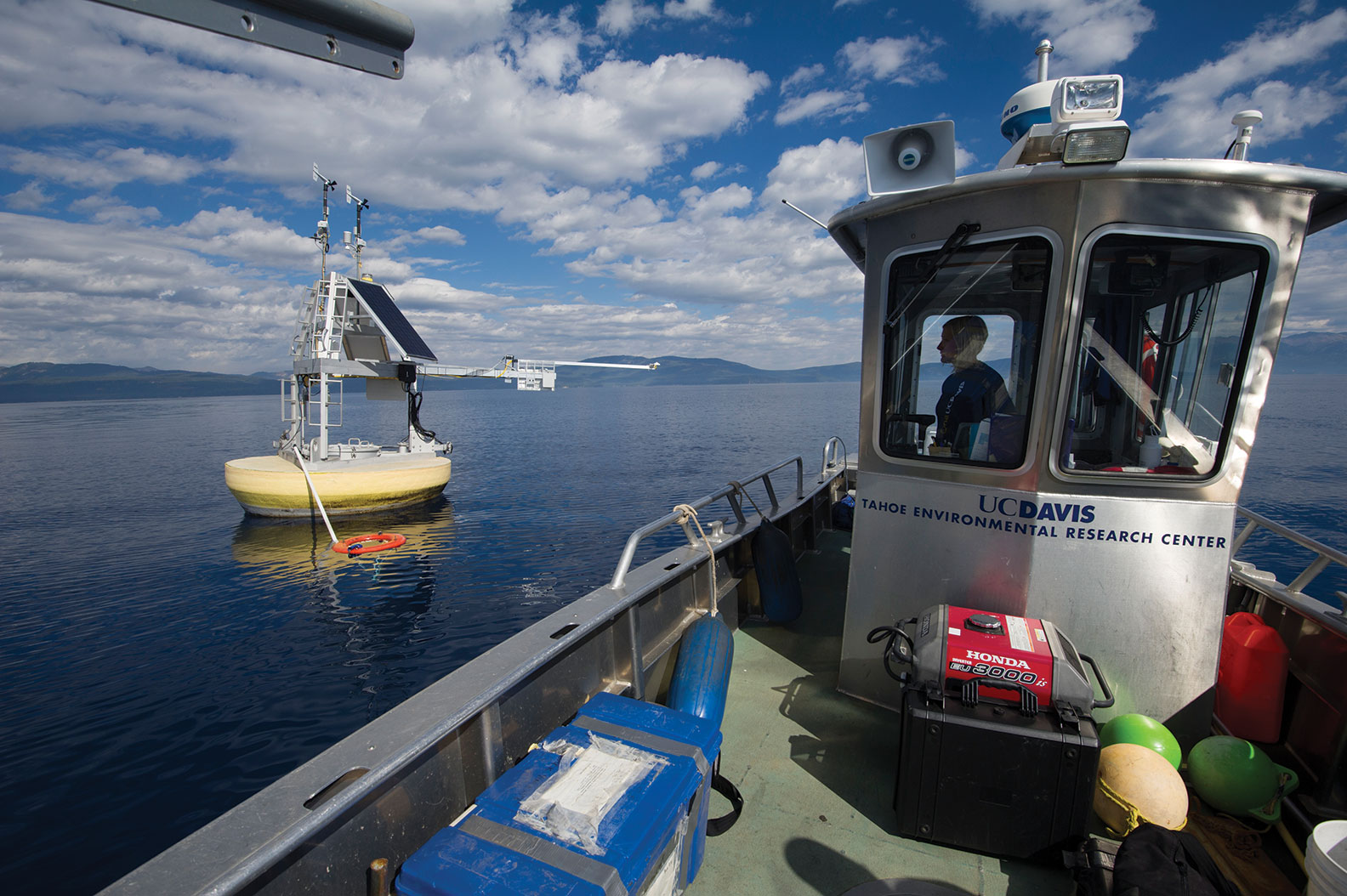 in Best of Tahoe 2016 | Environment | Written by Dylan Silver

What does this mean for Lake Tahoe? Everything.

All of Tahoe’s unique attributes rely on water temperature. Warming could change The Lake’s ecosystem, color and clarity. This trend also has far-reaching impacts for the world’s population, much of which relies on freshwater systems for food, drinking water and economy.

“Society depends on surface water for the vast majority of human uses,” said study co-author Stephanie Hampton, director of Washington State University’s Center for Environmental Research, Education and Outreach, in a press release. “Not just for drinking water, but manufacturing, for energy production, for irrigation of our crops. Protein from freshwater fish is especially important in the developing world.”

The study looked at 25 years of satellite and ground data for 235 lakes, including Lake Tahoe, on six different continents. Lakes in higher latitudes are warming quickest, it said. The data showed these lakes are warming an average of 1.3 degrees Fahrenheit per decade, much faster than global air temperature.

“These results suggest that large changes in our lakes are not only unavoidable, but probably already happening,” said the study’s lead author, Illinois State University associate professor of geology Catherine O’Reilly, in a press release.

In 2014, the most recent year data is available, Lake Tahoe’s average water temperature was 42.9 degrees Fahrenheit, the second warmest since recordkeeping began in 1970. The average surface water temperature, 53 degrees Fahrenheit, in 2014 was the warmest ever recorded. The difference in temperature between the surface and deeper waters can have a huge impact, says Geoff Schladow, director of the Tahoe Environmental Research Center (TERC), which contributed data to the study.

“The main threats to Tahoe and all lakes are the impacts that global warming will have on the physical mixing processes,” Schladow says. “Surface warming will decrease the duration and intensity of those mixing events.”

The Lake did not mix to its full depth for the third year in a row in 2014, according to TERC’s 2015 State of the Lake Report. Without natural mixing, warm water stays on the surface while deeper waters are deprived of oxygen, translating to a less hospitable environment for the native aquatic ecosystem. Some of the effects of this warming are already beginning to show, Schladow says.

“We have noticed a shift in the size in phytoplankton,” Schladow says. “Phytoplankton are getting smaller on account of climate change.”

Phytoplankton, microscopic plant cells, have long been used as indicators of ecosystem health as well as physical and chemical changes, according to TERC’s website. The mostly single-celled organisms occur naturally in Lake Tahoe. The changes in phytoplankton will likely not be the only outcome of warming water, Schladow adds.

“The overall warming of The Lake will also increase fish and zooplankton metabolism, and through that will start altering the food web in ways we have yet to understand,” he says.

Lake Tahoe is already home to numerous invasive species and many native species. Non-native fish like bass, crayfish, goldfish and catfish have taken hold in limited parts of The Lake. Invasive plants like hydrilla and curly leaf pondweed have also established populations, despite the efforts of conservationists. Though these species were introduced long before any warming was noted, their spread could be boosted by the impact of climate change, says Jesse Patterson, deputy director of the League to Save Lake Tahoe, which has listed climate change as a threat to The Lake for more than a decade.

“Climate change will facilitate these changes. It’s something we can’t mitigate,” Patterson says. “If the water is warmer and warmer longer, these plants are going to do well here. All we can do is prevent them from getting here in the first place.”

Warmer water also means more algae. According to the study, algae blooms are projected to increase an average of 20 percent over the next century. More algae could drastically change Lake Tahoe’s uncommon characteristics.

“Algae could make Lake Tahoe look like every other lake in California, like a shallow, warm and green lake,” Patterson says. “We’re not there yet, but climate change is pushing us toward that tipping point.”

Though the problem can seem overwhelming, Patterson argues the battle is far from lost. Decisions made now, he says, are going to matter more than ever. Climate change will exacerbate problems like invasive species and algal growth, so visitors and residents must be extra cautious about introducing invasive aquatic plants and animals and promoting the growth of algae, he says.

One of the largest sources of nitrogen, which algae needs to grow, is car exhaust. The more car trips that can be eliminated, the less nutrients enter The Lake and the less algae can grow.

“Get out of your car. We’re not in Tahoe to sit in traffic,” Patterson says. “We’re in Tahoe because we want to bike and walk and be part of the environment. Every car trip we can eliminate prevents an impact on The Lake, whether it’s nitrogen or fine sediment.”

The examples locals set can go a long way in combatting the momentum of climate change, Patterson says. Often, the decisions locals make impact the actions of the larger visitor community. And, this may make the difference in how climate change materializes in the region.

“Our individual choices in Lake Tahoe are going to be realized much more dramatically as we progress,” Patterson says.