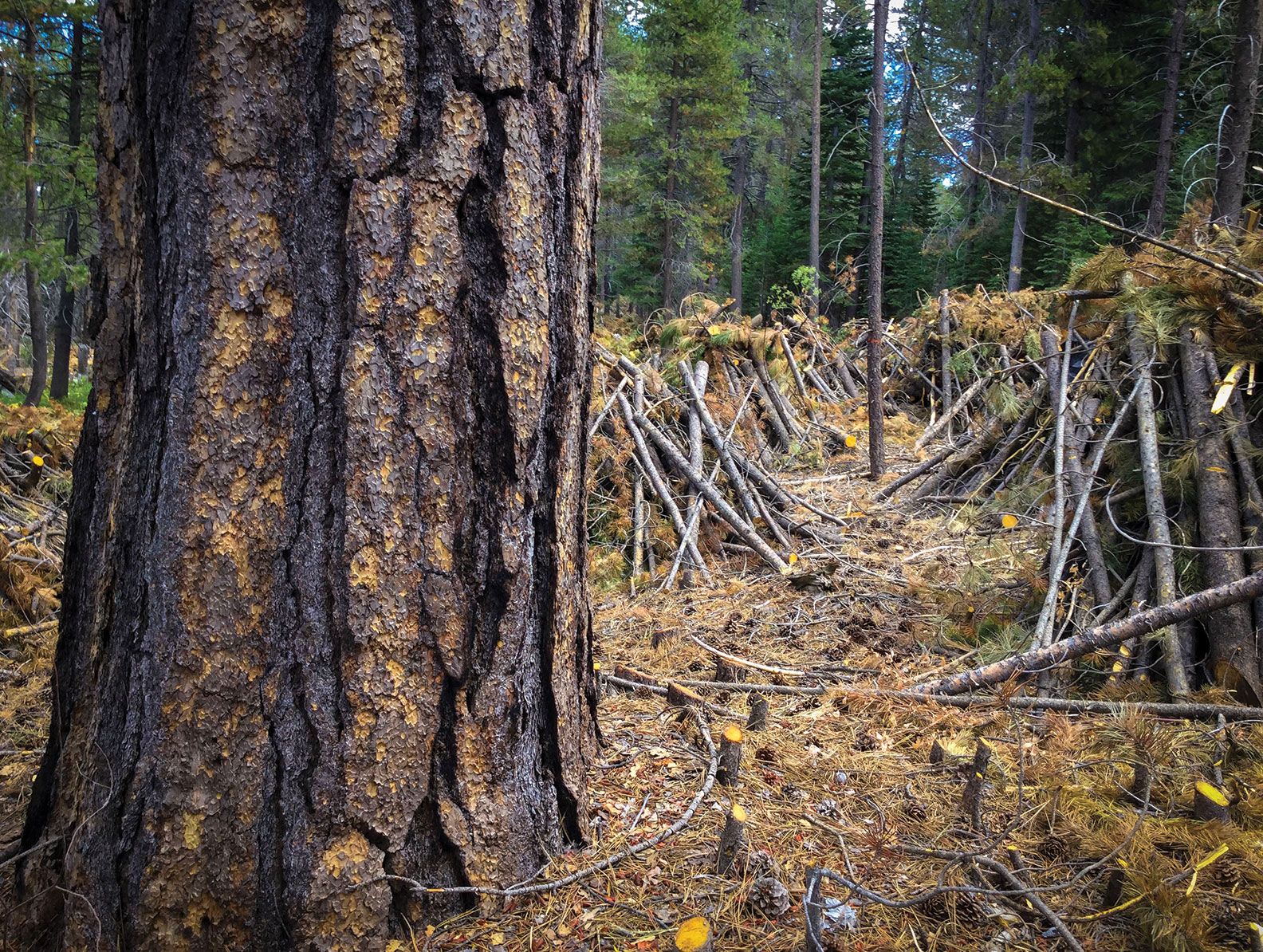 25 Nov Working Toward a Healthier Forest

Over the past few years, large swaths of the Sierra Nevada’s evergreen western flank have turned a sickly red-brown, with an estimated 66 million trees dying since 2010. Some 26 million of those have perished in the last year alone as forests fall victim to prolonged drought, overcrowding and beetle attacks.

Likewise, the scale and intensity of wildfires across the state continue to grow, burning more than a half million acres in 2016 and eating up larger and larger portions of budgets for land managers such as the U.S. Forest Service and CAL FIRE.

Even with local, state and federal government intervention—Sen. Dianne Feinstein requested $38 million for the Forest Service in September to address the problem, while California Governor Jerry Brown formed the Tree Mortality Task Force a year earlier—the path forward isn’t clear, with suggestions ranging from the wholesale logging of all dead trees to leaving nature alone to work itself out. 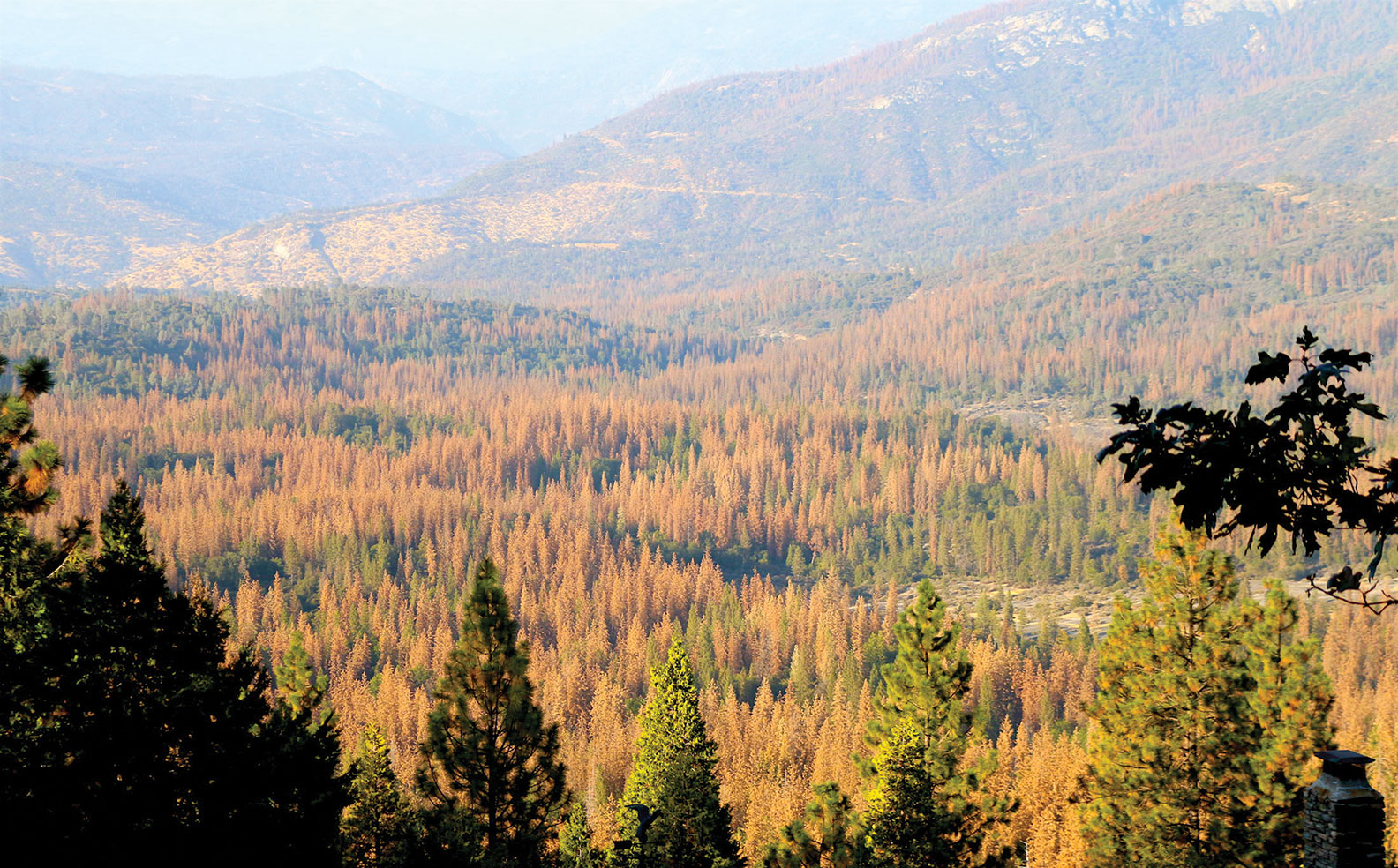 The Sierra National Forest south of Tahoe has been hit particularly hard by tree mortality, photo by Sylas Wright

But there is hope. In a small corner of the Sierra Nevada, a wide and unlikely combination of interested parties has quietly worked on the problem for over a decade. Located just north of Truckee, the 8,100-acre Sagehen Experimental Forest serves as a living laboratory for forest management, and offers one potential answer to the growing problems the Sierra Nevada and other Western forests face.

“We wanted to create a science-based approach to help land managers,” says Jeff Brown, station director at the UC Berkeley Sagehen Creek Field Station. “In 2005, when we were re-designated as an experimental forest, we decided to be different than all the others. We wanted to understand how the forest works. We wanted to return to as naturally functioning a place as possible. It was a lofty goal.” 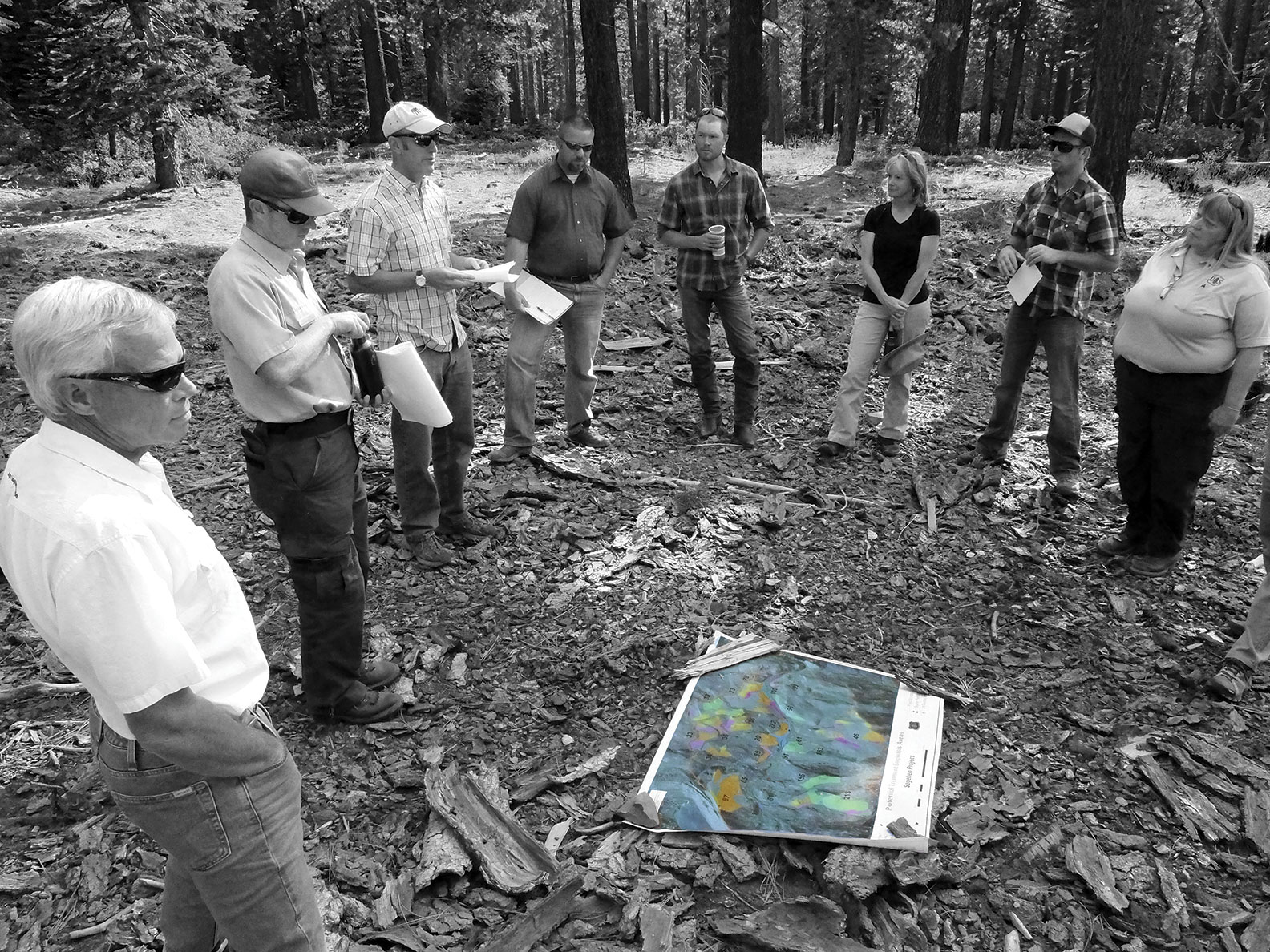 The project first began by gathering together a range of experts and stakeholders.

“We brought everybody from Sierra Pacific Industries [the main timber company in the region] to Sierra Forest Legacy, who would typically litigate these types of projects, and everybody in between, to the table and worked through it,” Brown says. “When something contentious would come up, we would form a group and hash it out.”

That group grew to about 65 people, Brown says.

Scientists worked to gather as much data as possible about current conditions in the experimental forests, tagging 30,000 trees and placing cameras and other scientific monitoring equipment, says Amy Horne, who has a PhD in forestry and is among the experts working on the Sagehen Experimental Forest.

Compared to more standard forest management practices—uniform thinning of trees regardless of terrain, aspect or other local conditions—the plan at Sagehen entails a mosaic pattern on the landscape with dense patches and thinned openings, Brown says.

“Looking at the Sagehen basin as a whole, you need to manage for wildlife, for ecology, for soil issues, for the research station and its researchers—a one-size-fits-all approach doesn’t work,” says Michael Cartmill, vegetation management officer with the U.S. Forest Service. 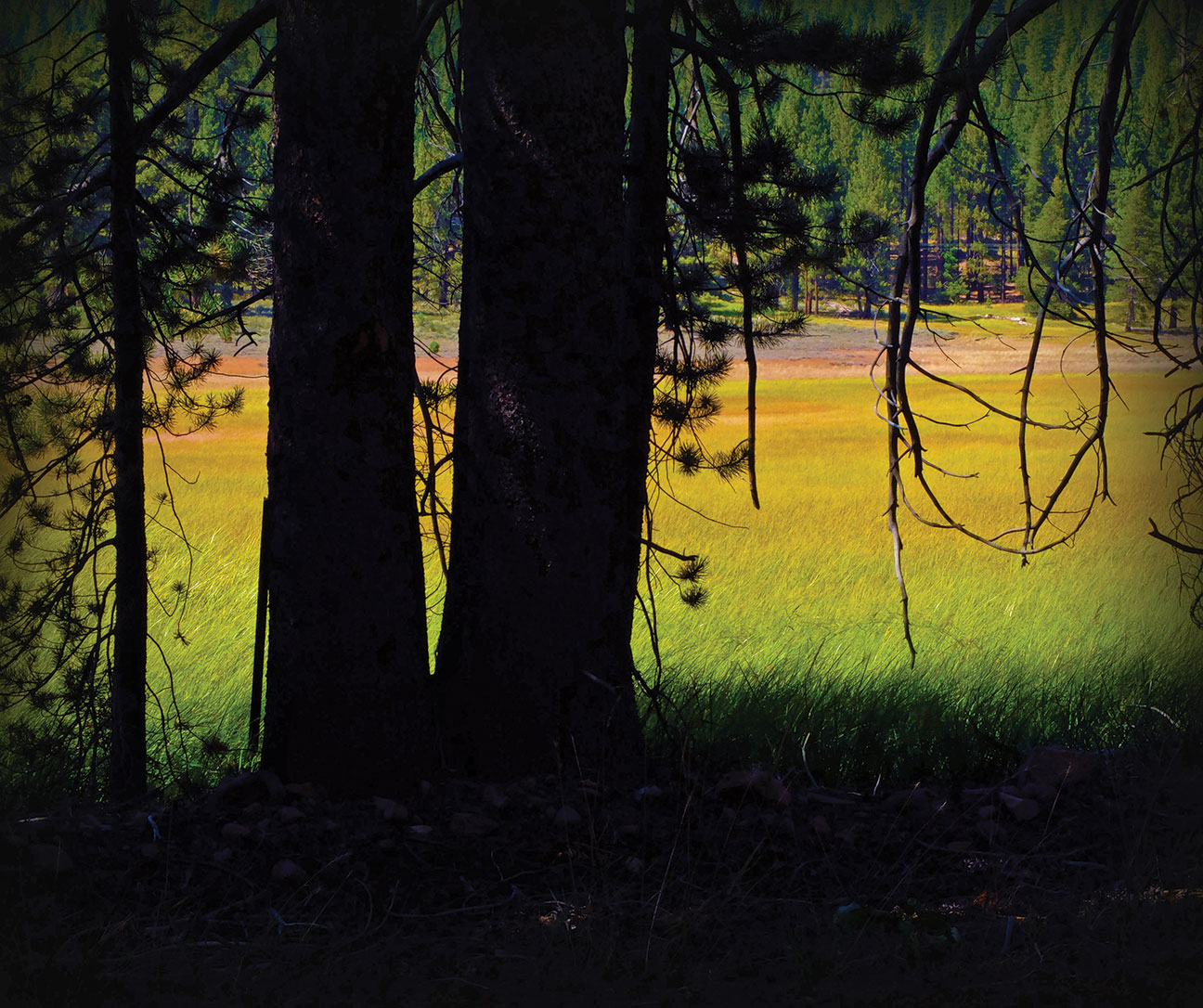 When a project to thin portions of Sagehen according to that mosaic pattern was submitted for environmental review in March 2013, it was supported by Sierra Pacific Industries, Sierra Forest Legacy and the University of California—the first time all three had agreed on a Forest Service project, Brown says. It had no opposition.

“I thought we were done. We put the project up for bid, but then we got no bids back,” Brown says. “We found out the California timber industry doesn’t know how to deal with the small-diameter timber we wanted taken off the forest.”

That meant the Sagehen project had to be scaled back, and for that kind of prescription to be used more widely across the Sierra and the West, the timber industry would need to be reinvented, Brown says.

“We have 1,600 acres we can’t do anything with because we can’t get the logs out. The timber industry has always been about large-diameter timber, but that’s not what’s coming off the forest when we’re doing this,” Brown says. “We need to reinvent the forest industry so it works in a different way rather than being dependent on the most profitable wood. Until we can solve what we do with this stuff, we really don’t stand a chance.”

Cartmill says instead of the originally planned 1,600 acres, 600 acres were either hand-thinned or mechanically thinned as part of the project, which was funded by the National Forest Foundation.

“If there is a market for biomass or other products that can be made, we would be in a much better place,” Cartmill says. “That treats the core of the problem—small-diameter wood.”

Horne sees the issue as an opportunity to reinvent the timber industry in a way that’s beneficial to both the forest and rural economies, she says, noting products like cross-laminated timber created elsewhere that doesn’t require large-diameter trees.

Looking to the Future

“I think all the pieces are in place for this to happen in the next couple years,” Brown says. “If it doesn’t happen now, though, it’s a moot point.”

Cartmill says other Forest Service districts have expressed interest in the work at Sagehen, which has recently expanded to include prescribed burning.

At Lake Tahoe, the West Shore Collaborative is bringing a similarly wide range of stakeholders to the table for an 80,000-acre project following Sagehen’s model, Brown says.

“We have a lot of momentum now. We’ve been talking to the Lake Tahoe Basin Management Unit for six years now about the West Shore, and it’s ready to happen.” Brown says.

Saving the West is another project coming out of Sagehen’s model, Brown says. Helmed by artists Newton and Helen Harrison through the Center for the Study of the Force Majeure at UC Santa Cruz, the project takes the collaborative approach used at Sagehen one step further, bringing in artists to help explain both the science at work and the importance of what’s at stake to the greater public.

The Harrisons, considered leading pioneers in the eco-art movement, seek to bring these issues to a larger stage, Brown adds.

“They said, ‘This is a huge issue effecting the whole United States—we need to make this a big deal,’” Brown says. “The idea is to come up with a thoughtful, holistic forest management as the norm.”

To learn more about the work at Sagehen and upcoming projects like Save the West, go to sagehenforest.blogspot.com.

Greyson Howard is a Truckee-based writer.