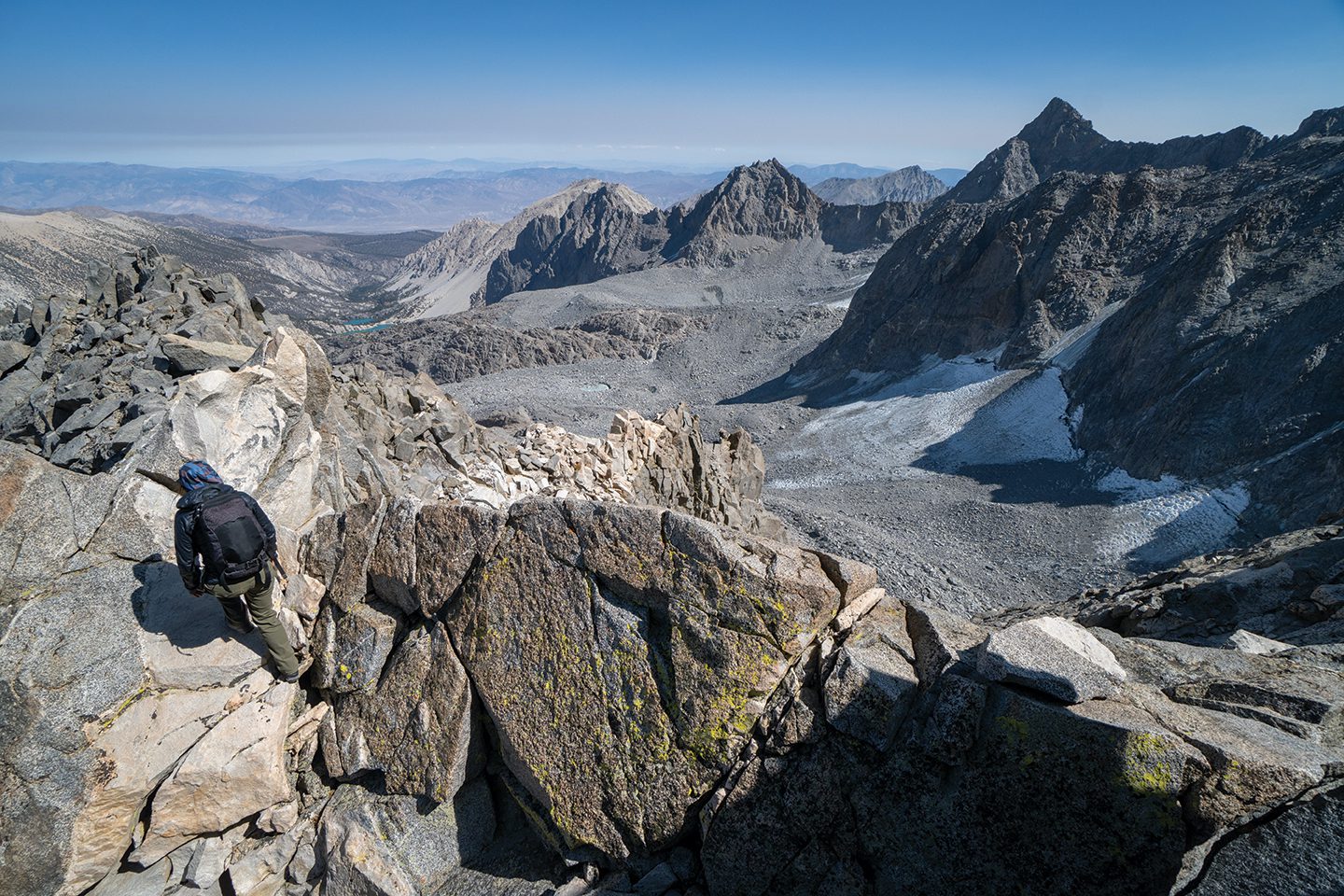 With 9 miles and 6,000 vertical feet to drop, Allison Lightcap starts the descent off Mount Winchell

Running From the Smoke and Tip-Toeing Through the Talus 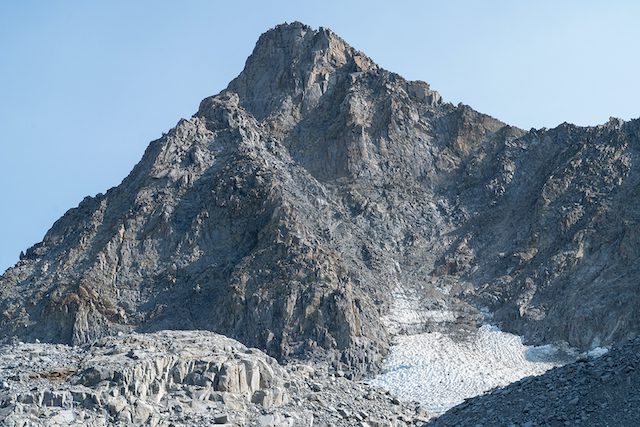 If our legs had control of our throats, we would be whimpering in fear right now. Every footstep of the path ahead looks like a twisted ankle waiting to happen.

“Seriously? We’re going where? That talus looks heinous,” says my wife Allison without an ounce of stoke in her voice.

Her dread echoes my thoughts as I scan the horizon. Despite the gorgeous views, the next hour of our lives is going to be quintessential Type 2 Fun—miserable in the moment, but, hopefully, epic fun in retrospect.

We’re hiking in the Palisades region of the High Sierra on a sunny day in early October 2021, and we’ve just gained a view of the remaining approach to Mount Winchell, the 13,768-foot mountain we came to climb. Leaving the trailhead at 4 a.m., we’ve already hiked 8 miles and climbed almost 4,000 feet to reach this vista. But from the looks of it, the last mile of the approach to the climbing route will be the crux.

Millions of basketball- to laundry machine–sized rocks, intermixed with the occasional van-sized boulder, form a jumbled sea of granite that slowly gains elevation toward the base of the peak. This rough ocean of rock marks the terminus of the Thunderbolt Glacier. As the glacier receded over thousands of years, it left behind a massive area of chewed-up loose rocks called a talus field in its wake.

Moving efficiently over talus is an art of alpine travel. It requires a trained eye for quickly identifying which rocks are settled enough to safely step on and which are loose and sketchy. When you step on a loose one and it moves under your weight, you need to instantly correct your balance or risk sliding with the rock and crushing your foot or leg into another boulder.

We’ve crossed miles of similar talus fields in our previous High Sierra travels, so we’re well aware of these hazards. This particular talus field looks especially gruesome as it’s rippled with head-high troughs and undulations that thwart any straight path through it. The only solution is to go slowly, stay out of the troughs as best we can and carefully consider every step before taking it. 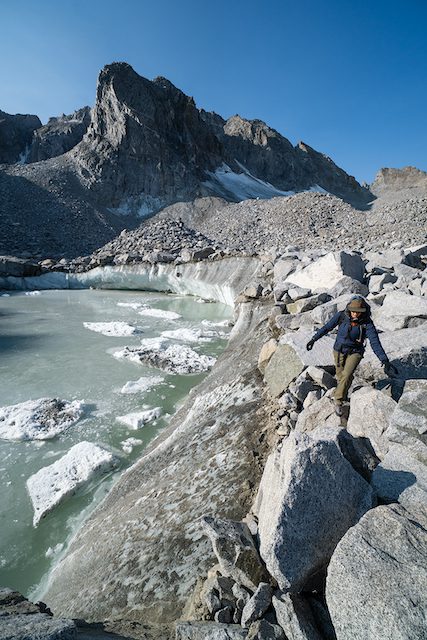 “I’m gonna need an attitude adjustment before we start hiking again,” says Allison upon hearing that our route barrels headlong into the talus field.

“Absolutely,” I reply as I throw down my pack on a flat rock. “Let’s chill for a bit and enjoy this fresh air.”

Because that’s what it’s really all about for us. The potential of summiting one of the 30 tallest peaks in the Sierra is entirely secondary to just breathing in the alpine air and escaping the plague of our summer—wildfire smoke.

For months all our High Sierra adventure plans had been held hostage by putrid, ash-filled air emanating from the Caldor and Dixie fires. Religiously monitoring air quality sensors and smoke forecasts allowed us to sneak out for the occasional bike ride or short hike, but other than that, we’d been housebound like everyone else in Tahoe and the Sierra.

The Caldor Fire is still active at this point, but it is a fraction of its previous size, so the smoke impacts aren’t as severe or widespread. Looking at the forecast just 24 hours earlier, smoke projections indicated that the Palisades would be clear for an estimated 18-hour window, starting at midnight. By 5 p.m. the following day, smoke was expected to smother the Sierra crest again.

The forecast was all it took to convince us to throw the sleeping bags in the truck and drive from North Lake Tahoe to Big Pine after dinner. Our plan was to catch a quick nap at the trailhead and then hit the trail before dawn. We figured we could complete the 18-mile round-trip journey to the summit of Mount Winchell and back in less than 12 hours and be driving home before the smoke rolled back in.

Tip-Toeing Through the Talus

Snacking on some tasty Medjool dates and dumping out the pesky pebbles in our shoes is just the attitude adjustment we need. Soon we are moving again, tackling the talus field one trough at a time.

Midway across the field we come upon a stunning ice-encrusted pool fed by a detached lobe of the glacier. The exquisite natural phenomenon perks our energy even further as we’re thrilled to walk among the glaciers after such a dismal smoke-choked summer.

Our renewed attitudes do not improve the travel conditions, unfortunately. The talus guarding the final quarter mile to the base of the peak becomes the worst possible size—dinner plates to microwaves. This size talus is the worst because the rocks are more likely to be loose than bigger rocks, and they are still big enough to do serious damage if they crush your foot. The slope angle also gets steeper, so every rock we step on takes more of our weight.

All the talus we’ve seen so far is what we informally refer to as “young talus,” meaning it was left unsettled by the receding glacier or drifting snow from the previous winter, and thus behaves like a teenager—erratic and irresponsible. Conversely, larger talus that feels locked in place, with hardly any loose rocks, we refer to as “old talus.” It has been softened by the millennia and no longer cops a shifty attitude to passersby. 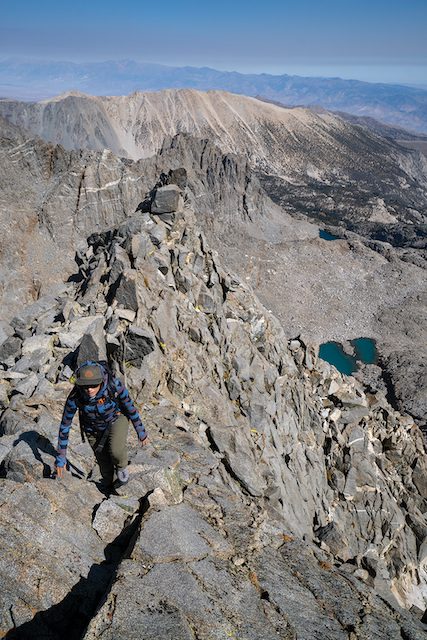 Lightcap climbs into thin, fresh air near the summit of Mount Winchell

Scrambling to the Summit

Slowly but surely, the talus ends and we begin to climb into buttresses of solid rock that mark the start of Mount Winchell’s East Arête. First climbed in 1923, the East Arête is rated as a Class 3 route, which does not require a rope or climbing gear. We’ll take the route one move at a time, though, as we must be confident we can climb down any rock feature we climb up. There is no easier descent route, leaving us to retrace our steps to get off the peak.

We begin scrambling up the progressively steeper ledges that crisscross the arête, following the path of least resistance. The climbing is steep enough that you wouldn’t want to fall, but it never gets too tricky or technical. The hardest moves come as we traverse a ledge covered in loose rock. Nearing the summit, we gain a knife-edge section of the arête that ramps up both the exposure and the views. This section forces us to traverse along a sidewalk-width ridge crest eye-to-eye with five of the tallest peaks in the Sierra.

One more exposed scramble up a shallow rock trough takes us to the true summit. While Mount Winchell is not nearly the tallest peak in the Palisades, it does have one of the tiniest summits, and offers one of the most incredible views of any peak in the zone. The tip-top is a narrow ridge about 10 feet long and maybe 6 feet wide.

Gazing off from the summit in any direction, stacked peaks and ridgelines stretch as far as the eye can see. An expansive view of the Thunderbolt Basin is displayed to the south and east, with Bishop Pass to the north. To the west is a spectacular view of the magnificent Dusy Basin. 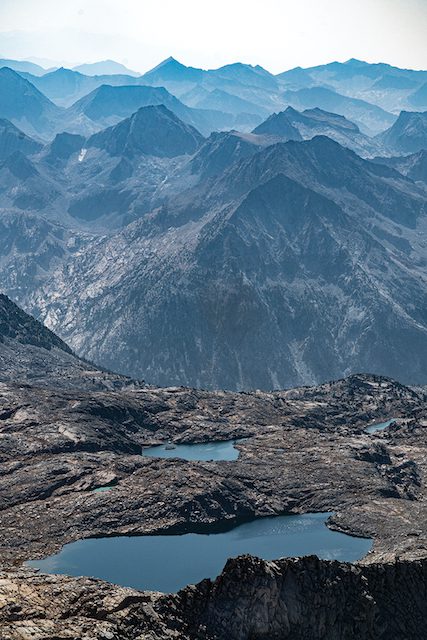 It’s not the clearest summit view we’ve ever seen, though. That’s for sure. All the peaks in the Palisades are still framed by crystal blue sky, but the western horizon is shrouded in smoky haze. We’ve summited at noon and the smoke is forecasted to creep up from the east and retake the Palisade crest by late afternoon.

Seeing the smoke, even from afar, is distressing. We’re reminded that not only is fire season still in full swing, but that we better get moving to avoid choking on smoke while hiking down. Our adventure is not even half over, and the smoke is on its way.

Retracing our steps down the climbing route and across the talus field is exhausting, but thankfully uneventful. Soon we are leaning into gravity, letting our legs unconsciously carry us down the trail as our eyes feast on the fall colors exploding in the late-afternoon light.

Looking back to the crest as we round the last corner above the trailhead, smoky haze is beginning to overtake the peaks. We had nailed it. Our lungs sucked in nothing but sweet nectar on our surgical summit strike, and our talus woes are already a forgotten memory replaced by the joy of success.

Seth Lightcap is an Olympic Valley–based writer, photographer and avid explorer of Sierra rock, snow and trail. See more of his stories at www.sethlightcap.com.