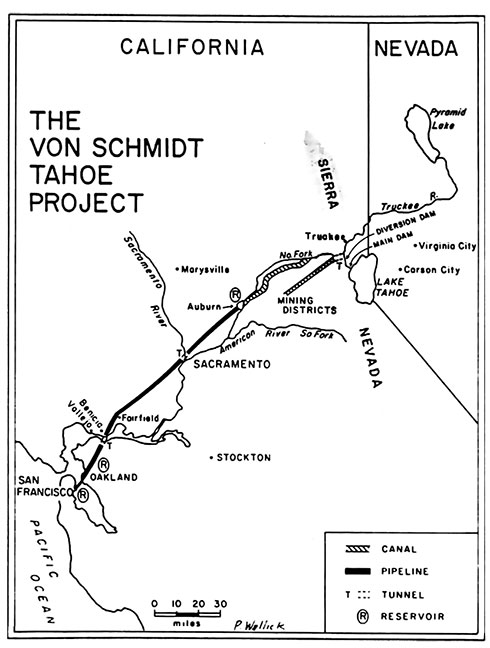 Ever wonder why Tahoe’s 39 trillion gallons of pure Sierra snowmelt were never dammed or drained to slake the bottomless thirst of California or Nevada? Strange to say, that almost happened—not once but several times—with Tahoe’s precious waters coming within just a few slim votes of being siphoned off to San Francisco or spilling over a high hydro-dam into Nevada from the heart of what might have been Lake Tahoe National Park.

It began in the 1860s with the Battle of the Big Four versus the Big Bore: California’s famous rail and timber barons facing off against San Francisco’s thirsty citizens for control of Tahoe’s outflow. Stepping into the fray on behalf of San Francisco was a European immigrant engineer named A.W. Von Schmidt. Having already succeeded in bringing piped water to San Francisco (where only bottled water had been hauled in before), Von Schmidt’s next move was to sell the city fathers on a visionary scheme to blast a five-mile, solid-rock tunnel straight through the heart of the Sierra to Lake Tahoe. According to Von Schmidt’s vision, his diversion tunnel would divert the Truckee via a dam and canal toward Squaw Valley, dive underground, reemerging at the head of the American River, where it would then deliver 200 million gallons of water a day to San Francisco through a complex system of pipes and aqueducts. In the words of the San Francisco Daily Morning Call, Von Schmidt’s Tahoe Tunnel seemed destined to become “decidedly the most stupendous water works enterprise ever undertaken on the American continent.”

This was no mere pipe dream on Von Schmidt’s part: His tunnel proposal was backed by serious money. As historian E.B. Scott explains in The Saga of Lake Tahoe, “Colonel A.W. Von Schmidt had assumed the presidency of the Lake Tahoe and San Francisco Water Company, incorporated in 1865 and capitalized at $20 million”—the equivalent of hundreds of millions in start-up funds today. Following the lead of these private investors, politicians were quick to ante up. As historian Mark McLaughlin notes in the Sierra College online journal, Snowy Range Reflections, “To fund the project Von Schmidt wanted the city to issue $10 million in bonds and he petitioned the U.S. Congress for a generous right-of-way package, which included large checkerboard land grants as well as any inherent timber and stone resources.”

The project took off quickly. “Von Schmidt,” Scott continues, “had completed his crib dam of timber and stone fill by the fall of 1870,” thereby raising the natural lake level by several feet. Granted generous city funding, Von Schmidt promised that the whole tunnel project could be completed within just five years.

Facing off against Von Schmidt’s Big Bore were California’s Big Four, including Leland Stanford, Charles Crocker and the other powerful owners of the Union Pacific Railroad. Granted vast private timber rights by the federal government, they now needed Tahoe’s surplus water to flush or float millions of feet of virgin Tahoe timber directly into their Nevada sawmills. After forming the Donner Lumber and Boom Company, headed by Mark Hopkins and Leland Stanford, they were granted authority by the California Legislature on April 4, 1870 to construct a dam at the exact same location as Von Schmidt’s. One lake; one river: two dams? The Bore War had begun.

Meanwhile, Nevada’s newspapers attacked Von Schmidt’s proposal as Tahoe’s Tunnel of Doom. Soon, all of Nevada joined in the fray, vowing that “Von Schmidt should most certainly be the one damned instead of damming the Truckee.” As the Virginia City Daily Territorial Enterprise thundered on March 2, 1870, “They may take the gold and silver from our hills, and bind us in vassalage to the caprices of their stock boards, but the pure water that comes to us from Lake Tahoe, that drives our mills and makes glad our waste places, is God’s exhaustless gift, and the hand of man cannot deprive us of it.”

Back in San Francisco, the project was eventually killed—but not because it was viewed as impractical. Instead, as historian Douglas Strong explains in his book Tahoe: An Environmental History, “Although the [San Francisco] Supervisors accepted Schmidt’s proposal in 1871, the mayor of San Francisco vetoed the project, fearing monopoly control by a private corporation.”

Today the sole visible remains of Von Schmidt’s grandiose tunnel scheme is the low dam at the Truckee River’s outlet in Tahoe City—a modern concrete structure completed in 1913 to replace Von Schmidt’s original earth-and-timber bulwark of 1870—and a plaque at the proposed site of his diversion dam near Squaw Valley. That’s not much to show for a $20 million pipe dream. Yet, one could also argue that Von Schmidt’s true landscape legacy is the present day shoreline of Lake Tahoe, which was never returned to its original outlines after the construction of the Tahoe City dam.

Von Schmidt wasn’t the only one looking to utilize Lake Tahoe’s waters. Environmentalist John Muir’s dream for a Lake Tahoe National Park included provisions for a new, higher dam. As Douglas Strong explains, “The expected benefits to Nevada obviously would have been great, so the bill [creating a Lake Tahoe National Park in the year 1900] gained enthusiastic support there.” He continues, “The Reno Evening Gazette, in addition to praising the protection of the scenery in the area, surmised that Tahoe’s surplus water could irrigate 200,000 acres of Nevada’s farmland and provide hydroelectric power for homes and industry. Nevada’s surveyor general, E.D. Kelley, foresaw almost unlimited potential for farming, depending on the height of the proposed dam at Tahoe.”

Of course, no such dam was ever constructed, in part because wealthy California landowners had already built their own palatial summer homes and hotels right up to the very edge of the new lakefront shoreline created by Von Schmidt’s 1870 dam. No one wanted to watch their prized properties drowned to irrigate Nevada. To gain the support of the rail and timber interests that helped to kill Von Schmidt’s Tunnel of Doom, Muir’s National Park Bill also contained generous landswaps, exchanging cut-over timber lands at Tahoe for as yet untouched virgin forests further north. Alarmed, the San Francisco’s Examiner ran a lead editorial complaining that “Corporations May Gain Valuable Timber Lands in Exchange for Those They Made Worthless” in the wake of the Muir’s proposed Tahoe National Park deal. And so, much like Von Schmidt’s pipe dream proposal, Muir’s cherished dream of creating a Lake Tahoe National Park died a quiet death in committee, collapsed beneath the weight of its own ambitions and strangled in red tape.

Ironically, by this time, San Francisco’s frustrated water engineers had long since trained their sights on other sources, proposing (much to Muir’s horror) to dam Hetch Hetchy Valley in Yosemite National Park instead of siphoning off Tahoe’s surplus from Muir’s stillborn Tahoe National Park. After a bitter battle against what Muir considered Hetch Hetchy’s desecration, the dam was approved in 1913, handing Muir and his conservation allies their worst defeat since the collapse of the Lake Tahoe National Park bill in 1900.

All of which brings us round to the modern moral of this soggy little Tahoe tale: When it comes to siphoning off Tahoe’s water, we’re dammed if we do and dammed if we don’t.

Scott Lankford, a professor of English at Foothill College, published the 2010 book Tahoe Beneath the Surface: The Hidden Stories of America’s Largest Mountain Lake.