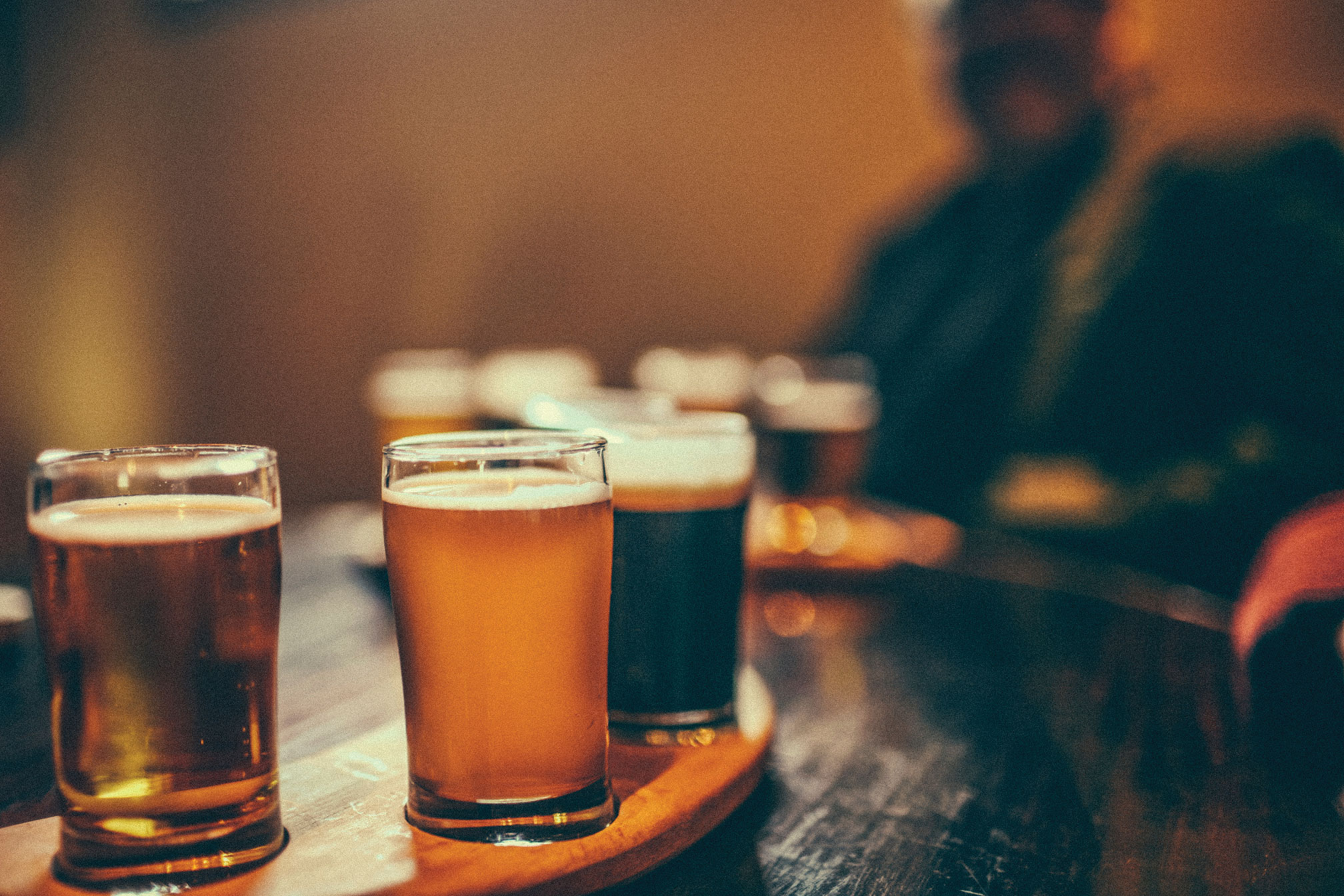 Beer is proof God loves us and wants us to be hoppy. While there is no proof Ben Franklin actually uttered those words, we do hold this truth to be self-evident: The Tahoe-Reno region is awash in the current craft beer buzz. Prohibition pretty much put the lid on most local beer production in Nevada until 1993, when the state legislature legalized brewpubs (long after brothels). Seems suds lovers have recently sniffed out a special something in the High Sierra water, and a big old batch of production facilities, taprooms and pubs have set up shop to keep pace with a thirsty albeit discerning crowd. Here’s our guide to what’s brewing.

Buzz: The first casino-operated microbrewery, this 20-year-old spot inside the El Dorado/Silver Legacy complex is named for the Carano family brothers. Brew: Redhead Amber Ale, a German-style altbier. Bite: Big Boy Mac & Cheese: rigatoni pasta mixed with beer–cheddar cheese sauce, crisp bacon and caramelized onions, topped with a potato chip crust. Bit: Because the fermentation room is on the roof, the beer moves two stories up and back down (from the third to the fifth floor) during the production process.

Buzz: This newcomer specializing in lagers, whose name was inspired by a somewhat creepy old oil painting, set up shop in a former SPCA building. They like to say, “You used to come here to get cats, now you can come here to get your kegs.” Brew: Pilsner, crisp and clean, showcasing top-quality German malts and hops. Bite: This tasting room with wooden picnic and stand-up tables also has a patio and food trucks like Starkey’s and Stephon’s Mobile Bistro parked outside. Bit: Base grain used in brewing comes from Fallon’s Churchill Vineyards; lagering tanks were converted from old dairy tanks.

Under the Rose Brewing 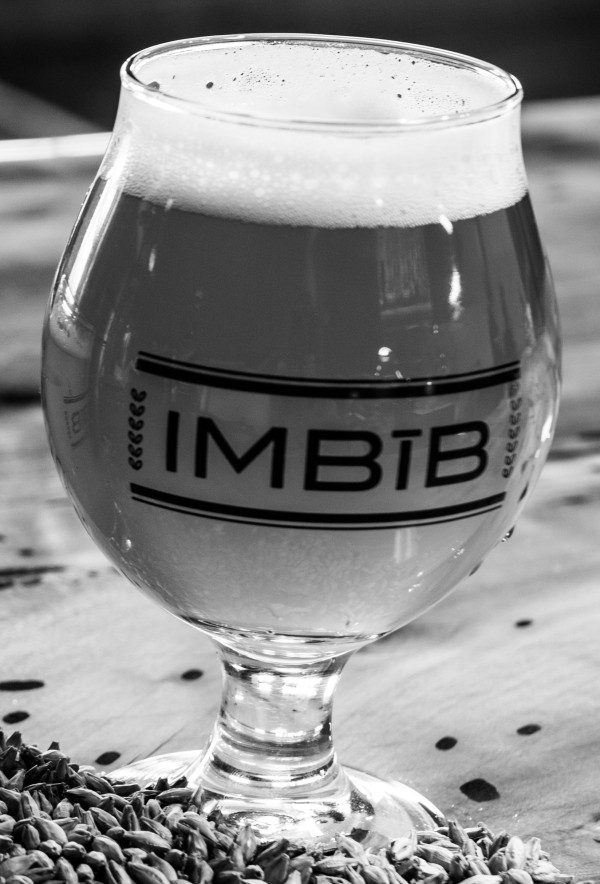 Buzz: Although Beer NV doesn’t produce any beer itself, this swank South Creek spot earns a slot for its 60 rotating taps, the largest selection in Northern Nevada. Tap takeover nights feature specific sorts of pours, including an all-local brew night. Brew: Lassen Ale Works India Pale Lager, brewed up the road in Susanville. Bite: There’s no food service but patrons are encouraged to bring in outside food—Yosh’s Unique Deli, South Creek Pizza and Los Compadres are just doors away. Bit: Beer NV’s mobile unit brings the party to you. 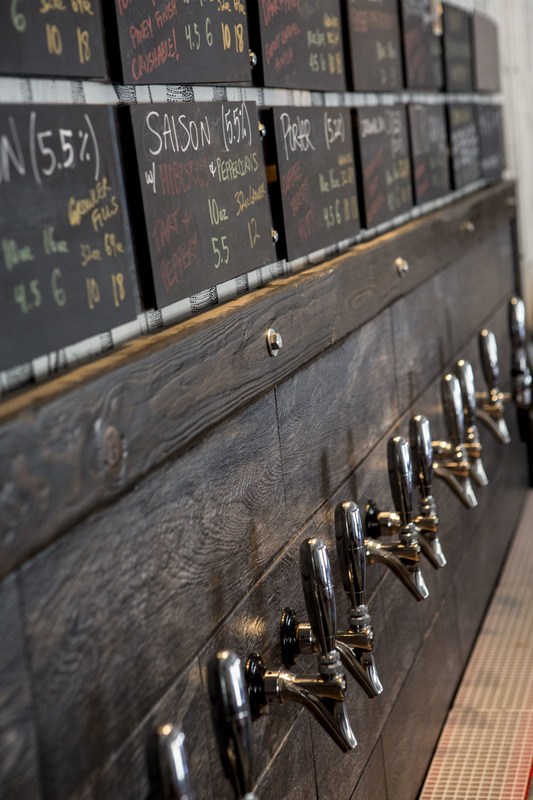 Buzz: Twelve to 15 beers are on tap at this converted auto parts store in an industrial part of town. Brew: Rauchbier, a German amber made with cherrywood-smoked malt that imparts a bacon-esque smokiness. Bite: No food service, but food trucks like Starkey’s, Sol Food and a regular pop-up sushi night fill the bill. Patrons are also welcome to BYO eats or order from one of the area restaurants. Bit: Well-behaved dogs are welcome; sometimes four-legged patrons outnumber two.

Buzz: Barrel-aged ales are brewed in Truckee, where you can take a brewery tour or stop by the taproom there for a taste. Brew: Higashino Farmhouse, with flavors of Szechuan peppercorns, Asian pear juice, Sorachi Ace hops and toasted brown rice. Bite: House-smoked bratwurst, served with sautéed red peppers and onions on a pretzel bun with a side of house-made beer mustard. Bit: This family-friendly spot with outdoor seating right across from The Lake may win in the ‘best brewpub view’ category.

Buzz: This 15-barrel brewery on a forested property near Graeagle, north of Truckee, produces high profile ales. The Trail of Tastes self-guided tour gives guests the option of learning about the brewing process and includes a flight of five beers. Brew: Uncle Elliott’s IPA, hoppy with a touch of caramel, brewed annually on Feb. 2 and available around a month later. Bite: No food service, but you can bring a picnic or use one of the three barbecues to fire up some eats. Bit: A nine-hole disc golf course and slack line keep the active busy; dogs are welcome here, too. 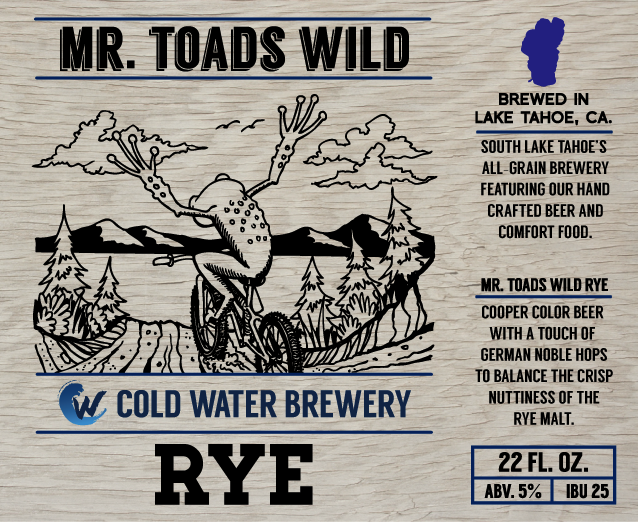 Buzz: Located at Heavenly Village, four ales and lagers are on tap, along with a half-dozen rotating selections like Boont Amber from Anderson Valley Brewing. Brew: White-Out Wit, a light unfiltered wheat beer with orange peel and coriander. Bite: Soft-shell crab sandwich made with Avalanche Ale beer-battered soft-shell crabs, served on a sourdough roll with lemon slaw, tartar sauce and sherry vinegar. Order with a side of beer-battered fries. Bit: Motto here is “Drink Tahoe Brew,” a foamy play on the League to Save Lake Tahoe’s Keep Tahoe Blue.

The Brewery at Lake Tahoe

Buzz: With its aim on ales, the first brewpub at Lake Tahoe opened in 1992 in a 1930s-era red brick building. Brew: Bad Ass® Ale, the signature deep burgundy–colored drink. Bite: Shrimp Po Boy—Palisade Pilsner–battered shrimp, bacon, shredded cabbage tossed in Sriracha aioli with lettuce and tomato on a toasted French roll. Bit: When it opened, The Brewery focused on making beer, its menu constrained by a postage stamp–size kitchen, but quickly gained a following for its Michelangelo pizzas made with Bad Ass® Ale pizza dough.

Buzz: The newest addition to the South Shore craft brewery line-up, this simple wood-paneled spot behind the DMV (formerly occupied by Bitter Creek Bar) launched early this year with a mission to focus on beer first, food second. Brew: South Shore Sour, light and refreshing Berliner-style fermented for a month. Bite: Peri Peri pulled pork—spicy pulled pork covered in house Pale Ale barbecue sauce and served with brewery slaw. Bit: Sidellis is a conflation of the names of Australian-born Chris Sidell (an alum of the UC Davis viticulture and oenology program) and his husband and one of the five local owners, Elwood Ellis.

Susan D. Rock is an Incline Village–based writer and editor who enjoys the occasional brew after chasing her sons from basketball practice to cross-country practice.