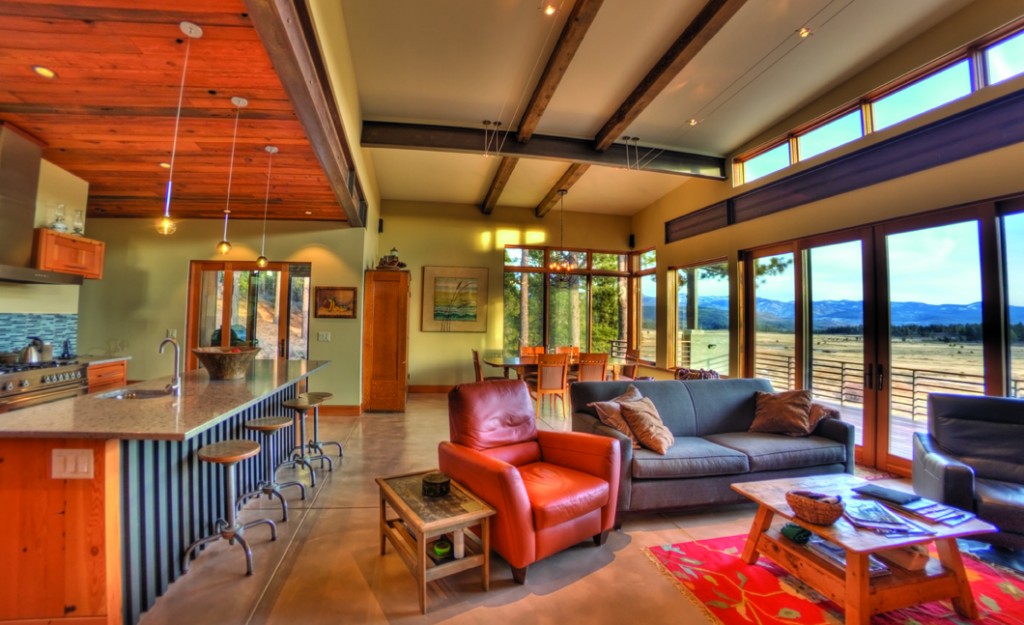 in Mountain Home Awards 2012 | Mountain Homes | Written by Chaco Mohler and Photography by Submitted
Blair and David Paterson were residents of little-known Russel Valley, rural acreage near Truckee, when their dream lot came on the market just down the road-a patch of hillside looking south over the valley to the peaks near Mount Rose.

While they loved the location, they hesitated. They had just finished remodeling their current house, “a slow process,” says Blair. “So we were tired, done. To take on a new project was a bit overwhelming.”

Eventually, egged on by Blair’s family, they took the leap, bought the lot and were lucky enough to find a buyer for their old home who would rent it back to them while they built. Jude Gavigan of In House Builders came into the picture by chance. The home he’d recently completed, his own, matched what the Patersons were looking for: energy efficient, simple but modem design.

“It had a mix of materials and clean look,” says David, “no Tahoe chunk.”

“David and Blair had ideas for the house they wanted from the get-go,” says Gavigan. “They had the photos and everything. We just brought our experience and business model to fulfilling their vision.”

In House’s design for the property is a balance of rectangles under shed roofs, the master bedroom cantilevered over the slope. “We didn’t want a big box,” says David. Its southern walls are mostly glass.

The views and flow of the home’s spaces draw the visitor out over the valley. Designed for a couple’s lifestyle, all of the living spaces are located on the main floor, with a lower level containing two guest rooms, bathroom and large utility/storage room. These rooms are kept cool except when needed, but since it’s a ten-mile drive back to Truckee, when the couple entertains, they often are.

Key to the home’s design and construction were the materials chosen and the flexible designer/builder philosophy of In House, where details are decided during construction. When Gavigan found a great source for reclaimed redwood and fir, for example—the dismantling of a Georgia Pacific Mill in northern California—plans were altered and the exterior walls became sheathed in redwood and the kitchen cabinets built out of the mill’s fir roofing panels.

“You wouldn’t want to use that softer wood if you had children, but it’s just Blair and myself,” says David, a New Zealand native and property manager. Blair is a longtime instructor for Squaw Valley’s Mighty Mite program.

Steel provides the home’s structural framing; a beam supporting the south-facing wall of the living room allowed the window sizes and place­ments to be entirely design-dictated. The metal is celebrated in the open kitchen/living/ dining space, where steel beams are exposed and finished. A large, black oxidized plate frames the fireplace. But the metal is balanced pleasingly against the softer look of reclaimed wood, including cosmetic redwood beams that help define the high ceiling. A host of other mate­ rials also keep the space lively, including a kitchen backstop made of a colorful, recycled subway tile.

Aesthetic and open, the home is never the less outstandingly “green” in multiple ways: in the building process, use of mate­ rials, energy efficiency and durability. Instead of traditional framing_ the walls and roof are constructed of structurally insulated panels (SIP), which come four feet wide, use less lumber yet provide nearly 168 percent of the insulation value of stud walls, says Gavigan. “They cost more on the supply side,” he says, “but they save considerably on framing time. We can construct a roof in days rather than weeks.” The panels are manufactured in Reno.

Hydronically heated concrete floors run throughout the home, naturally heated by the sun through the large windows during winter days. During summer, the floor’s concrete mass helps keep the house cool. The Patersons were planning on installing solar panels, but their heating and hot water costs have been so low-about $125 a month with the home a con­stant 70 degrees-that they’re second-guessing the need.

Gavigan seems most proud of the home’s stylish durability. For example, offset garage roofs and doors set a major visual note on approach, their opaque glass doors framed with black iodized aluminum. The glass allows natural light to stream into the large garage/ storage space, and the metal “weathers naturally,” he says. “You can come back in 20 years and not have to do anything to those doors.”

The home’s efficient design includes no trim around the windows, which works well with its modern lines as well as not distracting from the spectacular views found in every room. The entire project took only a year to build. It was completed for $325 a square foot, partially by keeping much of the subcontractor work (as the company’s name implies) in-house. The Patersons took on the painting themselves.

The mix of materials and lines in the completed home blend beautifully with the natural setting, in harmony with nature and its human inhabitants. “Designing and building this home was truly a unique process from the get-go in terms of client-builder-designer involvement,” says Gavigan, “and it remained a successful process throughout.”