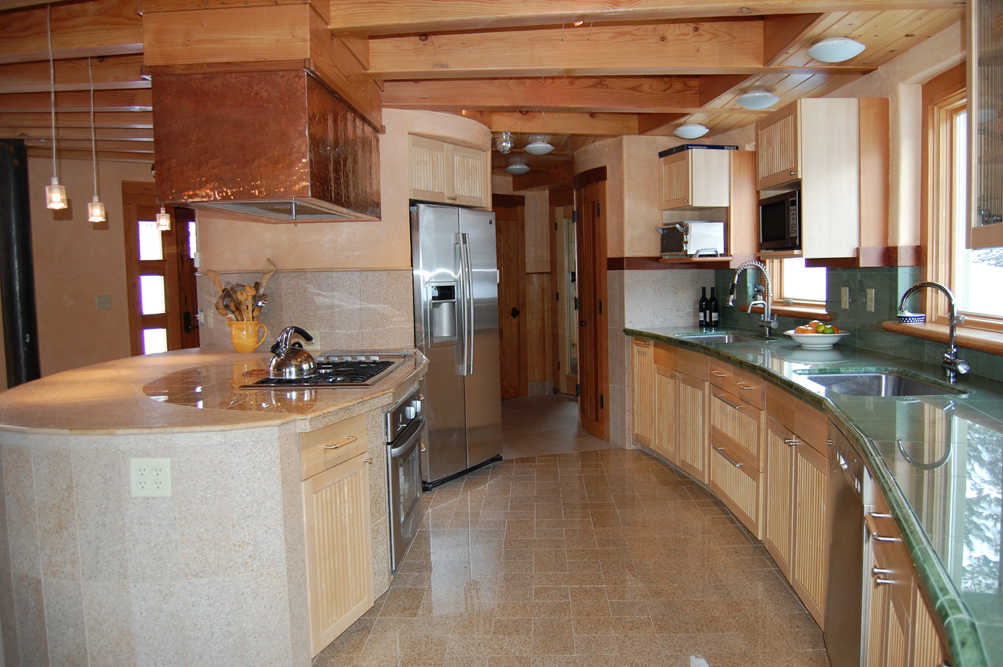 Jon and O’Malley Stoumen’s previous golden retriever, Neely, was an overachiever. She was an exceptional service dog for the disabled, so much so that she was designated a breeder for the program. And in her spare time, Neely picked out the location for her family’s dream home.

“One of the main reasons we found this place was Neely,” Jon Stoumen says. In the late 1990s, the Palo Alto–based couple owned a small A-frame cabin in a shaded area at the west end of Donner Lake.

“Even in the summer, it was cold,” Stoumen says. “On a typical day we’d get up and go walk Neely… and by the time we’d get halfway down the street, it would start to get sunny.” Neely would lead them straight to a spot along Summit Creek, “a little oasis of native grass and willows,” says Stoumen. “That’s where we’d hang out.”

An architect since the early 1970s, Stoumen tried for years to figure out how to brighten up their gloomy A-frame. Meanwhile, Neely had them spending more and more time at the lot by the creek, with its bright, south-facing exposure.

“It had everything we thought was fun about living up here: sunshine and water,” Stoumen says. Finally, the couple realized what Neely had already figured out—it was time to give up on the A-frame, buy this lot and build.

With the lot purchased, Stoumen began construction on the “solar cabin” during summers in the early 2000s. “I wanted a house that took advantage of the traditional solutions that people have used in Europe’s alpine environment for a thousand years,” he says. “A simple roof design was critical to the endeavor.”

A half-circle defines the outer wall of much of the home, cutting down on construction costs, says Stoumen. “Corners are multipliers of costs. A lot of materials go into corners, and the roof needs to respond with a hip or valley.”

Instead, the half-circle keeps the number of corners to two, and allows the roof to shed snow to the rear of the home and away from the entrance.

The three-level house takes full advantage of the sunlight with its south facing, central gathering space. Sunlight also flows into an enclosed “bridge” that attaches the garage to the house—a negative turned into a positive as it spans a sewer easement. Firewood and ski boots dry in the walkway.

The home has a steel frame and roof, allowing all of the interior walls to be non- load-bearing. The roofing is Ecostar, which consists of recycled auto windshield gaskets but looks like slate and is fire resistant. Exterior walls are made of Durisol, insulated concrete forms composed of recycled wood and cement. The tough, light, fireproof blocks are filled with high fly-ash concrete and rebar.

With the Stoumens doing most of the work themselves, it took almost a decade of summers to finish up and move in.

Visitors to the home enter the “wintergarden,” where the couple’s citrus plants are wheeled when it become too cold outside. Locally sourced granite stones form the pillars in front of the wintergarden, as well as the patio and staircase that leads down to the stream.

The home’s interior design and artwork reflect the surrounding aspens and water. A Tulikivi—an 8,000-pound Finnish soap- stone stove—dominates the main living and dining room and can hold heat for about 30 hours, Stoumen says.

A bedroom and bath adjoining the living room have commercial-width entrances to ensure accessibility for all, Stoumen says. “We wanted older or dis- abled visitors to have everything they need on the first floor.”

A spiral staircase leads to the upstairs bedrooms, which revolve around the stairway and a stovepipe. Here, the floors are made of bamboo.

In addition to the Tulikivi, heat for the home comes from an 80,000-btu condensing boiler and a solar-powered water heater. Electricity is provided by a 2.4 kilowatt solar system (arrays sit both on the house and garage roofs) that is hooked into the grid. In 2011, the Stoumens paid approximately $158 in electricity costs.

“The idea of delivering comfort, convenience and durability using the least amount of energy and materials was really important to me as an architect, and to us as a family,” Stoumen says.

The Stoumens deserve all the credit for fulfilling their vision for a sustainable yet aesthetically pleasing home, even if it was their dog’s idea first.