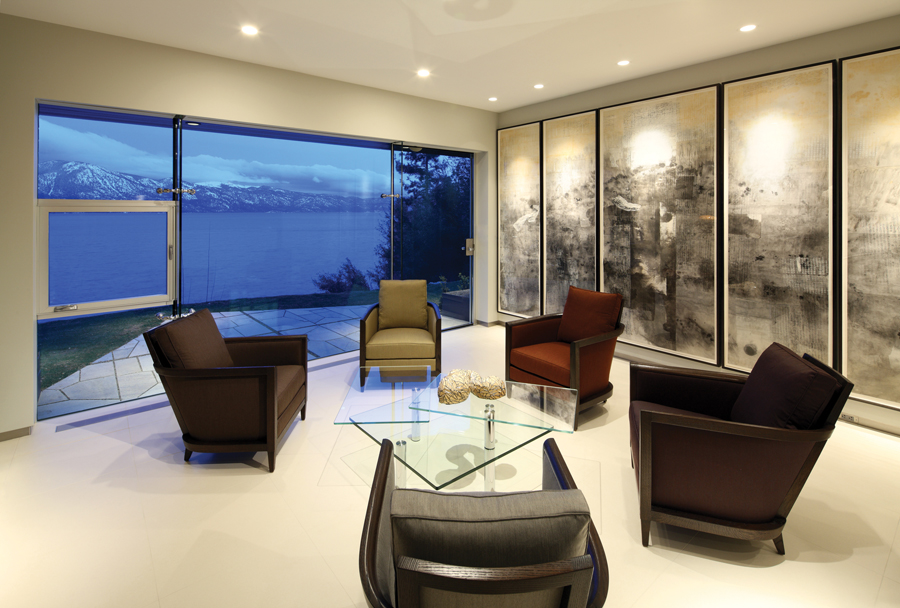 Anyone regularly traveling between Crystal Bay and Incline Village from roughly 2005 through 2010 Certainly wondered about the contemporaty lakeside house under construction. A barely visible curving metal roof and  an  ever-present  crane  teased curious travelers, but the house didn’t give up any of its  surely spectacular secrets. Certainly no one would go through the construction and agency gymnastics required to anchor a foundation beneath a functioning state highway if the result wasn’t guaranteed to, well, stop traffic.

Prior to beginning the ten-year-long project, the owners established a razor-sharp imperative when they purchased the property in 2002: eliminate as much “building” between the interior and the Lake as possible. Also, a multimillion-dollar art collection would eventually call the project home and necessitated appropriate provisions.

“The owner said to me that this house is all about The Lake and the art,” recalls real estate agent Charlyn Enstad, currently representing the house, now on the market for $43 million. The owners never compromised their vision; however, the reality of executing the dream verbatim created significant complexity.

“What was the most challenging aspect of building the house?” reflects Q&D Construction Manager Jerry Morgan. “There wasn’t one single thing; everything was challenging.” Morgan spent four days a week on site for over six years and invested two and a half years to pre-construction services prior to breaking ground. “There were no unimportant details, no matter how small.

The almost 9,000 square foot home utilizes cantilevered floor systems to both provide desired spaces and meet the Tahoe Regional Planning Agency’s (TRPA) coverage requirements. TRPA played no small part in the project’s evolution; everything  from  the  footprint  to  the  type of glazing installed to the dark color on the cedar exterior was shaped in some fashion by the agency.

Sagan Design Group partner Gary Furumoto served as TRPA consultant and civil engineer to the project for eight years. “The project spent three years in TRPA [processing] and after making multiple plan modifications and eventually meeting the height requirements, we got approval.”

But TRPA’s approval did not herald smooth sailing. “The slope of the property is 60 percent and is all granite,” says Furumoto. “Working on that slope made excavation extremely difficult, and it was a very slow process.” After eventually stitching the foundation to the hill via steel rods drilled into bed- rock, the steel structure took to the air, creating the canvas upon which no fewer than a dozen designers and consultants would collaborate.

An elegant frosted-glass door opens to the entry  floor ’s  tranquil  environment. The six- story glass stair, the home’s organizational centerpiece, waits just beyond. Laid in an elliptical plan, each stair tread (weighing 150 pounds apiece) is comprised of  six layers of laminated glass and disappears trimlessly into wall pockets, giving the sculptural ensemble the illusion of floating. “The glass stairs in the Apple Store on Fifth Avenue in Manhattan became the impetus for this,” says Enstad. Curved, glass panels serve as guardrails. Views of Lake Tahoe are served at each landing.

This is not a house with windows in the walls; this is a house who’s walls are windows. The adjacent circular glass elevator is even capped with a glass roof.

“No one in the U.S. makes an elevator like this,” says Morgan. “And it took 14 months to figure out how to make this one.” Individually sourcing the glass cab, hydraulic system and glass roof from separate companies, Morgan then set his team about fitting the components together. The view through the glass ceiling is what the Apollo astronauts would have seen if they popped the cone off their rocket ships.

Sitting three stories above grade, the surreal transparency of the main public space is simply stunning. Floor to ceiling panes of glass sit at an angle with not a shred of trim interrupting the perfection of intersecting materials. The purity of detail enhances the feeling that you are standing outside on a cliff overlooking one of Tahoe’s signature boulder fields. If the sacred sound of “Om” could be translated into man-made space, it might just feel like this.

“Part of what I think is important about the project is the sur- prise of the contrasts … in textures, in furnishing and finishes,” says Jim Laney, interior designer and owner of the Tennessee- based Curtis Laney & Laney. “But it’s a subtle contrast. There is still incredible softness even though you are surrounded by hard surfaces.” The white Eurostone floor tile, book- matched wood paneling and Cararra marble topping Euro- sleek Poggenpohl casework are all exquisite on their own, yet never compete with each other or the dynamic views beyond. Habitable levels below the main living area house the master suite and library, guest suites and a garden room. A vertical wing on the opposite side of the stairs provides an additional guest suite, an exercise and spa suite easily rivaling that of a5-star hotel, and a laundry room that can be described both as a Temple to Cleanliness and Dream Storage.

The central theme of every tale told about the project is how the  owner ’s  unflinching  determination  positively  empowered each project contributor to push beyond any boundary. Morgan offers a story about the 9’x7’ single pane pivoting terrace door and how he was told repeatedly by various glass designers that the door just couldn’t be done. “The owner looked at me and said, ‘Jerry, we want a frameless glass door,’ and I just said, ‘OK.’ This project was about exhausting all possibilities.” Fourteen months later, Morgan supervised the installation of a 2,000-pound sheet of glass, which pivots on titanium hardware with the gentle push of a finger. “This is perhaps the most involved owner I’ve ever worked with.  He had a vision and was able to commit to it.”

Laney, who has worked with the owners and their family since the 1980s, refers to his ten-year participation in the project as exhilarating. “It was a thrill to be able to be so creative. The result is exactly what the owner envisioned at the very beginning, and that’s a rare thing to be able to say about any project.”