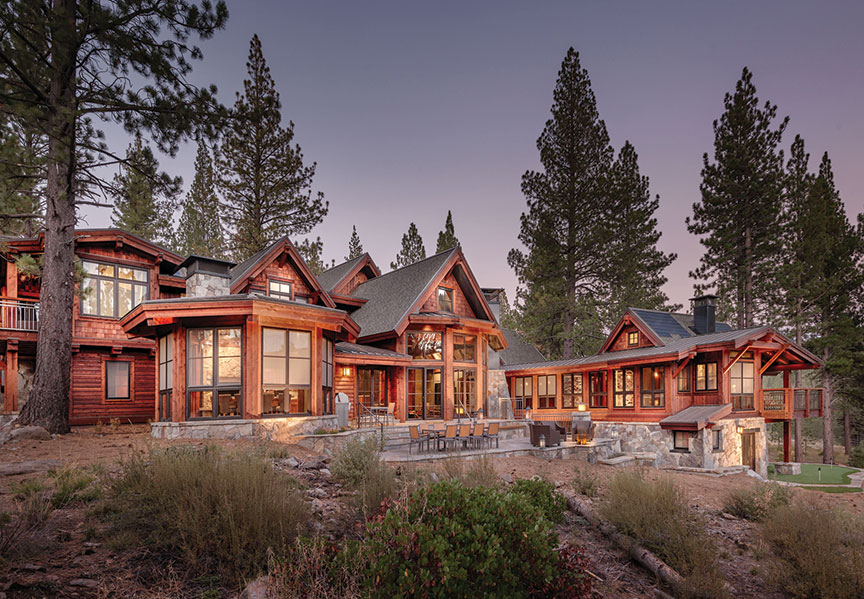 First, do no harm.

Jeff Van Harte’s goal for his Martis Camp home—a marvel of architectural and building technology working toward the common goal of nearly militant energy conservation—was Hippocratic when it came to his gorgeous, treed property.

“The last thing I wanted was for the structure of that home to compete with the beauty of the space and that view,” Van Harte says. 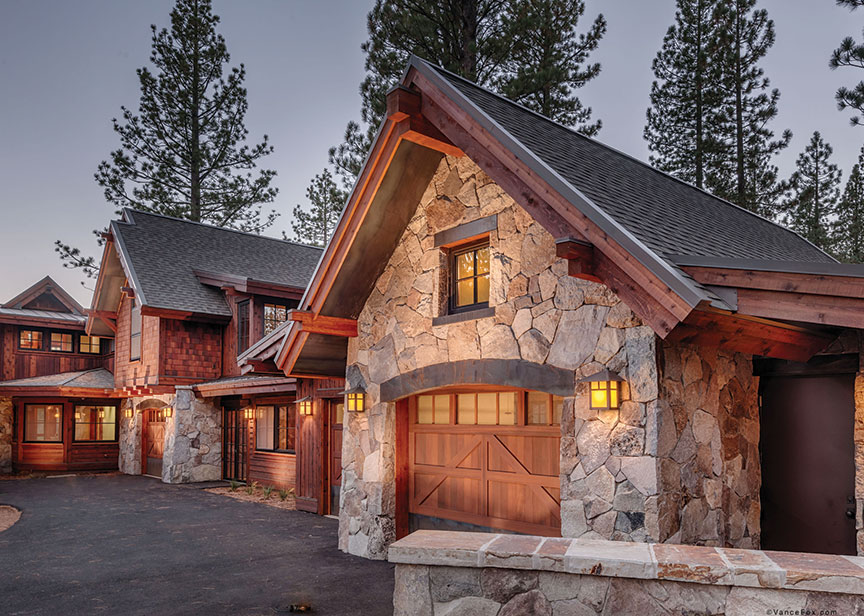 From the road, the home was meant to read as a collection of cabins

It may strike one as odd to think that this was Van Harte’s goal given that the home came in at a whopping 8,600 square feet, but raw numbers don’t tell the whole story.

It began as an inkling in the Bay Area resident’s head years ago as his family—including his wife, teenaged son, cousins and friends—outgrew a condo Van Harte owned at Northstar. He found and grew attached to a south-facing property at Martis Camp; in fact, he became so fond of his property’s conifers that he pinpointed a few “key trees” that architect Nick Sonder had to site the home around. Using a 3D-modeling program, Sonder accommodated his wishes, even pushing the master suite and an indoor golf room to the extreme southern end of the property, connecting it to the rest of the house via sky bridge, to make space for a large tree in the middle of the property.

“That was a ‘key tree’ for Jeff, so we found a way to work around it,” Sonder says. “We only had to remove five trees for the whole project.” 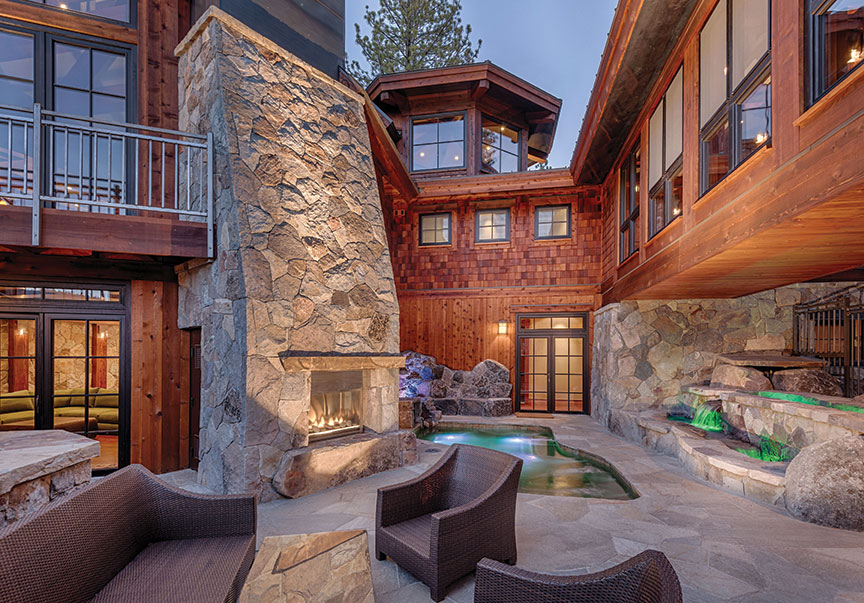 Siting the home was as much about the foliage as it was about the sunlight for this energy-conscious project, says Sonder.

Utilizing SketchUp—a 3D architectural software system—Sonder scouted the property for optimum sunlight and shade to naturally heat and cool the home as much as possible. The home’s energy “weaknesses”—namely heat-leaking windows—are concentrated on the south end of the home where they can welcome in more sunlight, a sign of good design, says the home’s builder, Mike Nethersole of MD Construction.

“It actually stays so warm we’re now having to put up shades to cool it,” Nethersole says of the south-facing great room.

But the green features of Van Harte’s home start far away from the Brazilian cherry–floored main spaces. Upon approaching the home’s entry, one drives over a number of 220-foot-deep geothermal wells.

A rough-cut cedar exterior is topped by a metal roof that includes a thin-film photovoltaic solar system on its southern-facing aspects—invisible from the roadside. In fact, much of the 8,600 square foot of home can’t be seen from the road.

“It has the sight impact of a much smaller home,” Sonder says.

Sonder began designing the home in 2009. The superstructure and framing started during the snowy winter of 2010–11 and construction wrapped up in autumn 2012. 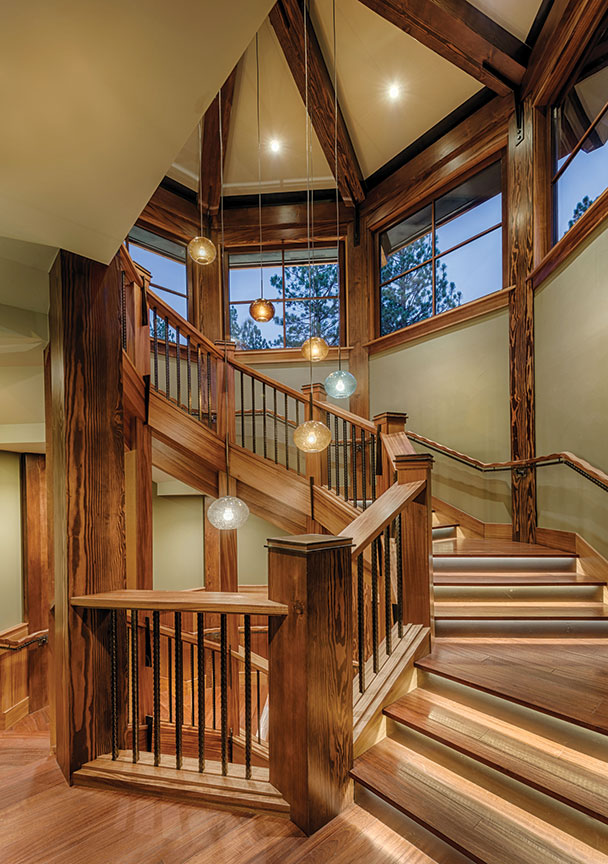 “I’m trying to get that house to be the biggest energy miser there is,” he says. “I’m still going down the list, looking at the appliances; it turns into a pretty big spreadsheet and a lot of head-scratching.”

Nethersole built the home with the Warmboard radiant flooring heat system—a system made of wood covered by a thin aluminum layer inlaid with radiant piping. The pipes pull heat up from the geothermal system to run through the house.

“It can take two to three days on a Gyp-Crete system to reheat a house a few degrees,” Nethersole says. “You can do that in a handful of hours with the Warmboard system,” allowing a shorter lead-time to warm up the house before Van Harte shows up.

Another interior green feature, the low-consumption (7 watts used), high-output 60-watt LED lighting, which accounts for nearly 100 percent of the lighting in the home. Controlled via the Savant software system, Van Harte can adjust the lights and warmth remotely from an iPad. 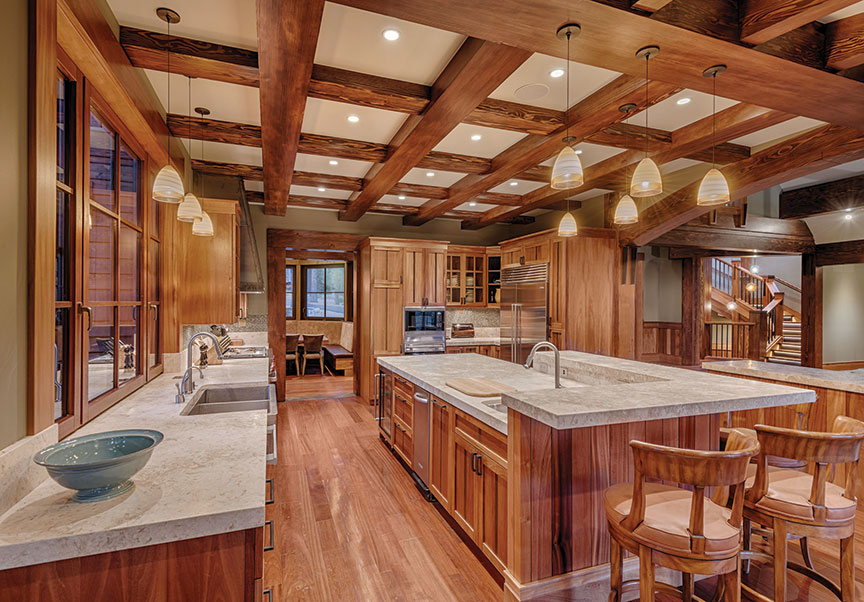 The kitchen opens to the dining room and living room—a request of the homeowner, who
wanted guests to be able to visit freely between the three rooms

A combination of blown and spray foam insulation—Sonder calls it “overinsulation”—seals the envelope tight.

“We’ll have months where he’s cutting little to no energy check,” says Nethersole.

The front entrance opens to the great room and, to the right, a large kitchen and dining room—an octagon with windows on five aspects—overlook the Martis Camp golf course and mountains beyond.

“It captures all the views Jeff loved about the property—the Sawtooth and Lookout mountains,” says Sonder.

The room—with a custom dining table designed by Sonder and built by Nethersole—opens up to the kitchen, a big plus in Van Harte’s estimation.

“I really wanted it to connect from the dining room into the kitchen and great room,” Van Harte says. “People move very fluidly through those three rooms, and it gives great views in the late afternoon.”

To the left of the main door is a similarly-shaped space as the octagonal dining room—this one housing a three-story spiral staircase, leading down to a lower-floor bar and game room and up to bedrooms.

Energy Star appliances were selected for the home with the express purpose of utilizing as little power as possible; since the hot water is heated through the geothermal system, one-fifth of the usual energy bill disappears off the top, Nethersole says.

Sonder and Nethersole’s greatest achievement, though, may be making the green experiment livable, Van Harte says.

“I’m just really tickled that we were able to integrate that all into the house without making it look like a solar manufacturing facility,” he laughs.