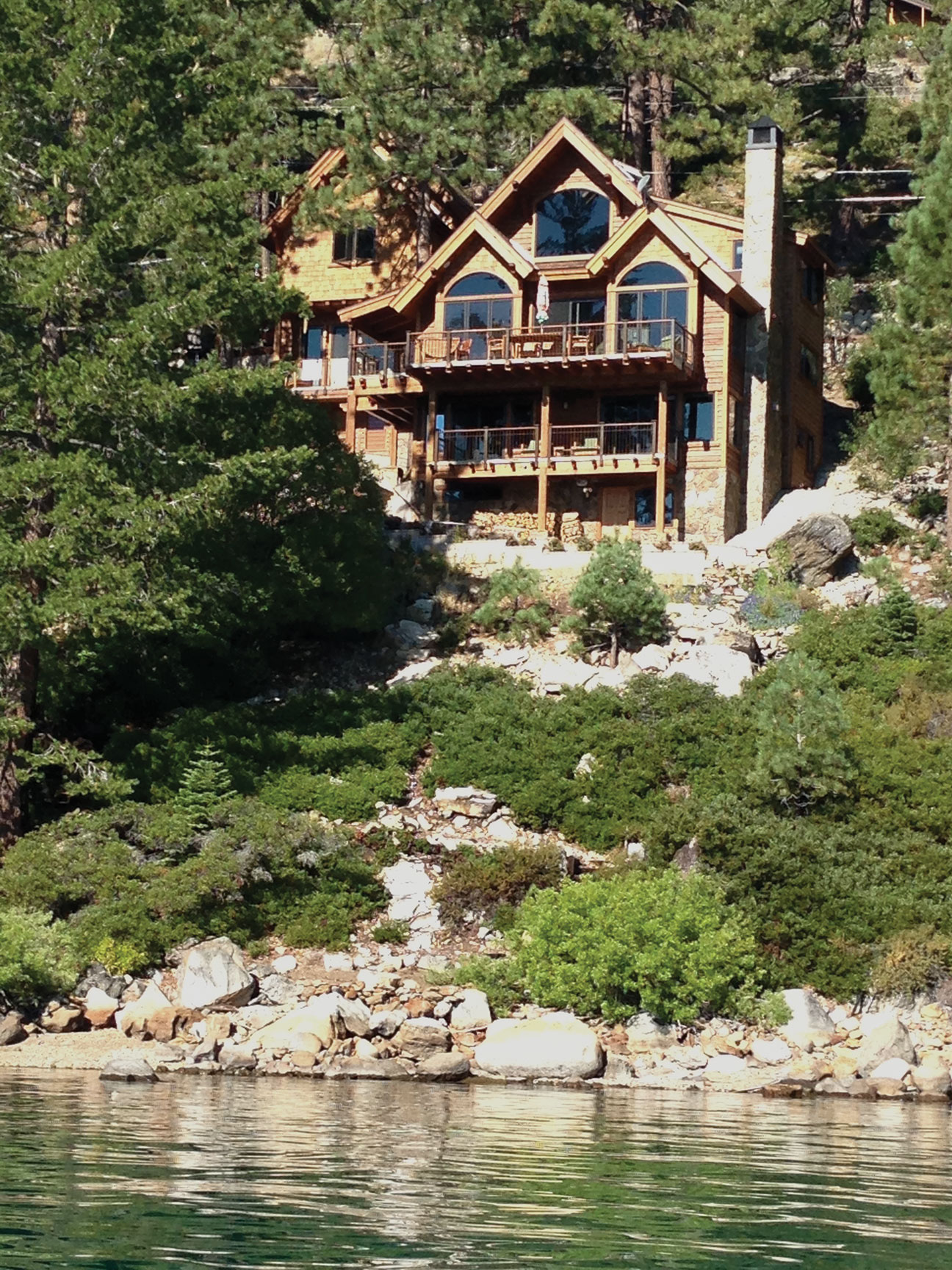 Gonowabie is a street steeped in as much character as its name. The narrow, twisting, one-way lane hugging Crystal Bay’s sharp lakeside slopes is a precarious place to drive and park, let alone build. Having an insightful architect for a neighbor helps.

Lou Sardella, the founder of a machinery manufacturing business in Baltimore and now chairman and majority owner of Park City, Utah’s Ramp Sports, lived at The Lake from 1996 to 2000. He returned to Tahoe in 2009, purchasing and moving into an updated house on Gonowabie. The following year, the home next door—a neglected, 1970s-era summer cabin in need of a total makeover—came up for auction. Sardella snapped it up.

“It was in such bad shape,” says Sardella, an engineer by training. “It was like a shoebox.” A shoebox sitting squarely on a 40 percent grade lot with limited coverage and height restrictions. He consulted with friend and neighboring homeowner architect Elise Fett on a remodel, the goals of which were to increase curb and lakeside appeal and views, create a larger and more functional entry and living spaces, and add bedrooms, bathrooms, a detached garage and a guest suite to the original 1,942 square foot structure. 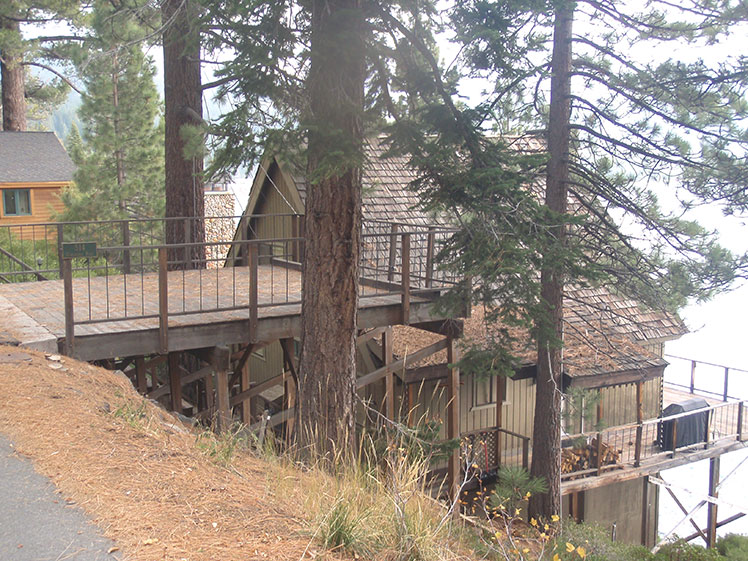 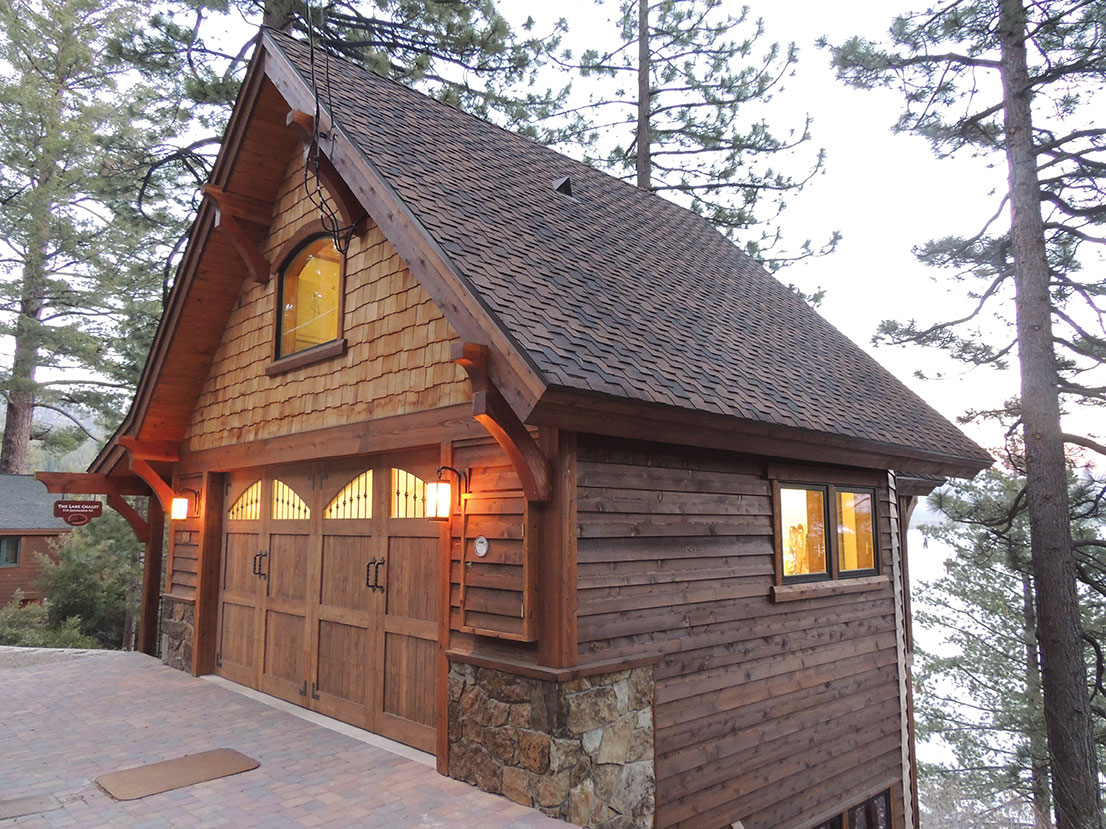 The remodeled car deck, before and after

The two started designing the remodel in 2011; Rick Wolden Construction completed the job at the end of the following year. Sardella now occupies the Old Tahoe–style home full time. Produced within a tight set of constraints, the finished product is nothing short of a total transformation for both homeowner and neighborhood.

“Lou had a general idea of what he wanted to do,” says Fett (who is a longtime member of the TQ Home Awards panel). “We worked together on the details. The result is a very efficient house, with very little hallway and great views.” Of the original 1974 house, only the main loft and lower floor framing plus half of the roof remain.

The challenges of rehabbing this lakeside property started at street level. “The design was very sensitive to the neighbors’ views,” says Fett. “We balanced coverage and setbacks with garage size in order to minimize the variances requested and maximize the room in front of the garage for reduced impact on traffic plus ease of access and flow on the narrow one-way street.” Sardella worked with Washoe County to widen the road at his property line, and paid to put in the retaining wall on the opposite side. The living area one level below the garage includes a full bath, mini kitchen and fireplace, and utilizes a Murphy bed to maximize flexibility.

The original structure, whose main egress was a small white door on the side of the house, had two bedrooms and two baths; the new configuration boasts a master suite and additional bedroom plus full bathroom and powder room. Additional space was created by increasing existing crawl spaces and altering the roof line over the loft to a shallow shed roof. An open loft/storage area was redesigned as a grand main entrance, creating visual impact as well as easier access to the flanking guest rooms and better separation of sleeping and living areas. The dark, narrow staircase opened up, doubled in size and now leads, with expanded views, to the great room below. 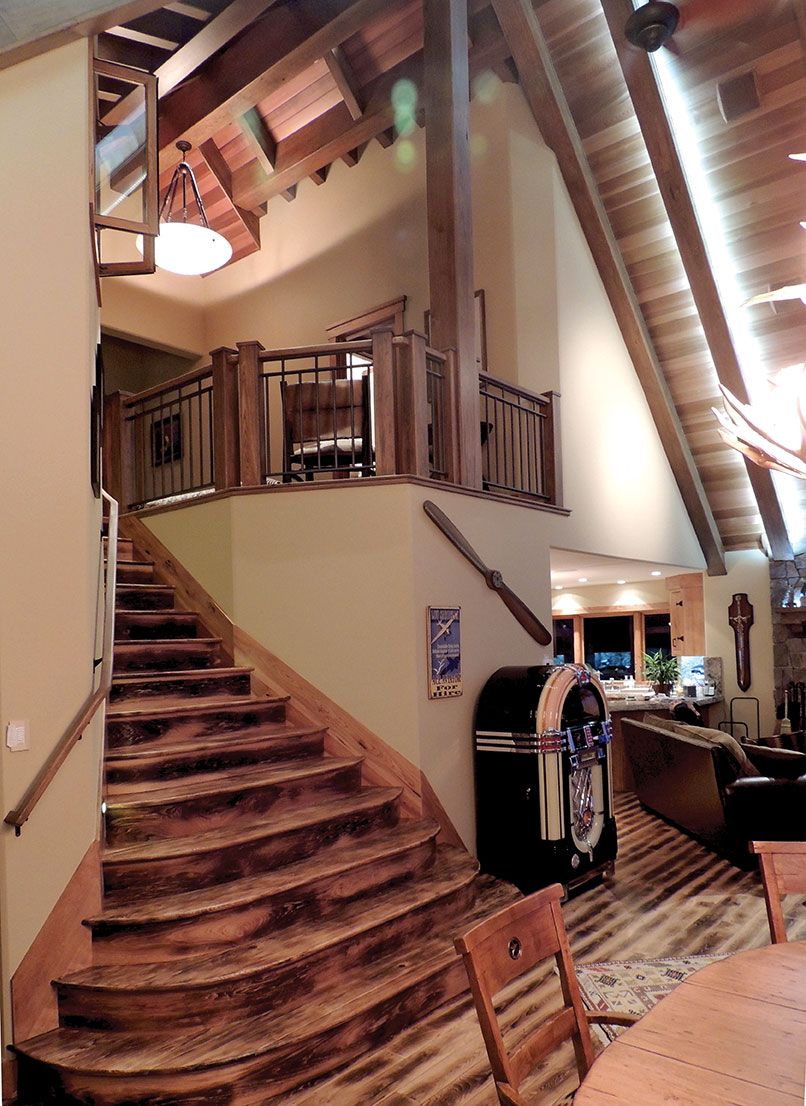 The expansive staircase leading to the main floor of “Lou’s Lodge”
provides a sharp contrast from the narrow, dark space that
previously connected the areas

Pop-outs break up the roofline and give the great room character, more delineated and useful spaces, as well as built-in under-window seating and storage. Repositioning the fitted stone fireplace and chimney from the middle of the room and using sliding glass doors improved vistas and outdoor access. “Elise came up with great views,” says Sardella. The original vaulted ceilings and the spaciousness they convey remain; the exposed beams are now wrapped in wood.

Off the great room, the old, dark galley kitchen is now an open office. On the other side of the main living area, a functional and spacious gourmet kitchen with custom cabinetry and thick granite slab counters (including a peninsula cut to increase circulation) makes more efficient use of the space formerly occupied by a bedroom. A combined coat closet and pantry maximize limited storage space.

Flamed hickory on floors and ceilings throughout lend the house a warm, grounded hue. Sardella worked with Incline Village–based interior designer Nancy Henderson to select finishes and furnish the home in a masculine fun décor that includes a jukebox and sleek hand-crafted wood kayak.

Sardella chose to leave in place rather than excavate a couple of large boulders, their granitic bulk now a part of the master walk-in closet and bathroom. Their presence serves as a solid link to the outdoor surroundings.

But perhaps the design element that is least obvious, but to Sardella, who dubbed his new digs “Lou’s Lodge,” one of the most important: making sure that the house was a part of the neighborhood, not in spite of it. Owning a pair of adjoining lots certainly helped attain that goal. “Lou had me design the house so that the neighbors who did not have lake access could use his set of stairs to get down to the water, but still preserve his privacy,” says Fett. And while most folks building beautiful lakefront homes might subscribe to the adage that good fences make good neighbors, this character-laden street benefits from a homeowner who thinks otherwise.