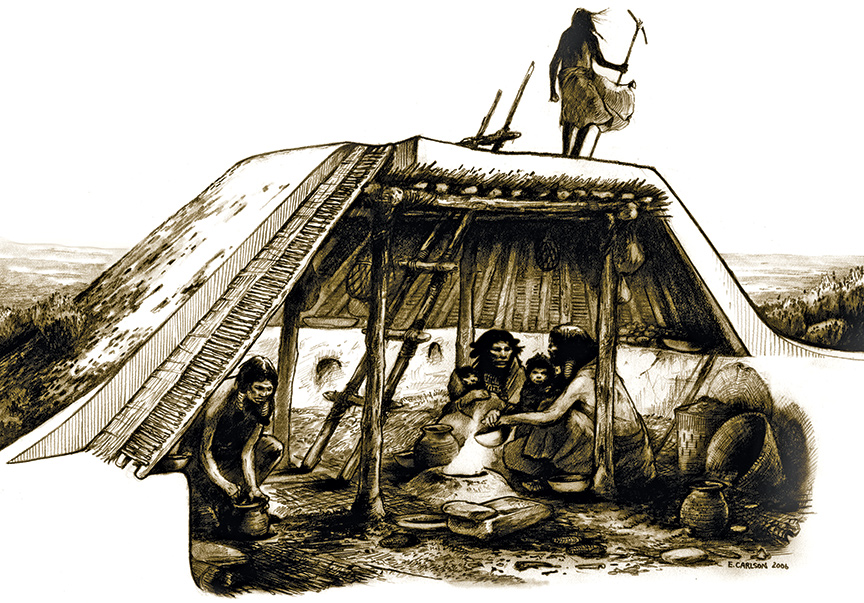 In Lake Tahoe social circles, where prevailing architectural trends past and present function as conversational currency, arguments about whether Lake Tahoe has its own unmistakably distinctive architectural style may be given full shrift.

While some pundits point to the innumerable rustic wooden cabins dotting Tahoe’s shores as comprising a genuine Lake Tahoe feel, others will argue such habitations were being built in much the same style in the Adirondacks, Catskills, White Mountains and other Appalachian locations for decades before arriving in the Sierra Nevada.

Currently, a slew of houses being built in Placer County’s Martis Camp attempt to forge contemporary architectural styles with their emphasis on flat roofs, minimized or absent eaves and abundance of glass affording wide views of the surrounding topography.

A rising chorus of voices in the local architectural milieu assert these “mountain modern” homes present a twist on innovative architectural styles unique to the area, while others who prefer the more traditional fare contravene the idea.

Regardless of whether a true Lake Tahoe style has been generated organically or borrowed from other eras and geographical locales, the Lake Tahoe Basin has witnessed architectural trends that have come and gone and come back again over the centuries.

Before John C. Fremont spied Lake Tahoe in 1844, the Basin and its now-famed translucent waters were no stranger to human habitation.

The Washoe nation annually repaired to The Lake’s shores during the summer season as a means of beating the valley heat while taking advantage of the diverse flora and fauna in the alpine area.

During the early period of the Washoe tribe’s existence in the area, they lived in rudimentary Martis pit houses.

A shallow pit is dug into the earth and two to four poles are pounded vertically in the ground on either side of the pit. Wooden poles are placed horizontally for lateral bracing and then wooden slabs are stacked along the lateral bracing poles to provide shelter. Weather is kept out by either using earth or a collection of brush, bark and other collectable materials from the surrounding environment. The scale of the house was commensurate with its purpose, whether used as a family dwelling place or a communal gathering space.

European Settlement and Victorian Architecture, 1850 to 1900 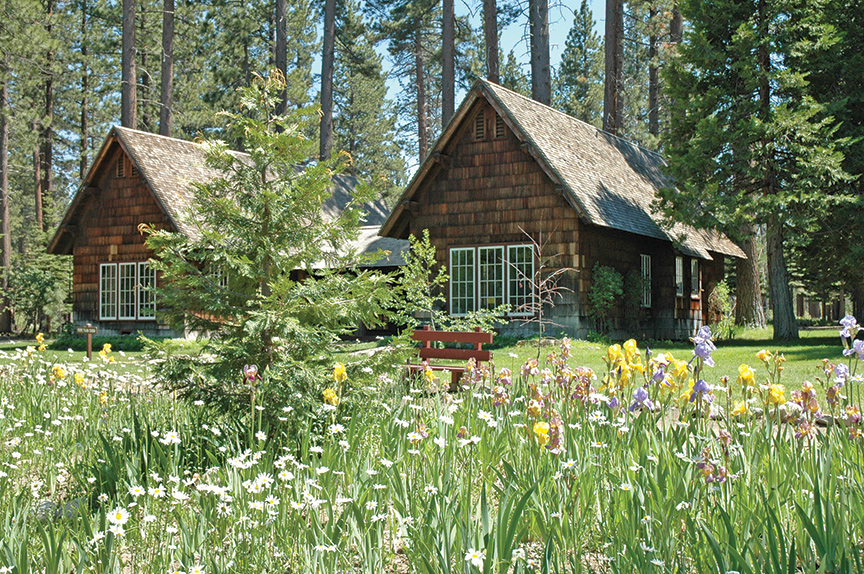 The first habitation built by European hands is widely considered by historians to be Smith’s Station, built in 1851 by Martin Smith, a trader who erected a small trading post at the current site of Meyers, California.

The presence of Johnson Cutoff, a trail connecting overland emigrants streaming in from the east to get a piece of the burgeoning California Gold Rush, meant the South Shore of Lake Tahoe developed far in advance of its northern counterpart.

When the Silver Rush came to Nevada in 1859, development at Lake Tahoe gained steam, though the buildings erected at the time emphasized function over form.

However, Lake Tahoe got a glimpse of its imminent future when the Glenbrook Hotel, the Basin’s first resort, was built in 1863 as a retreat for the blossoming regional aristocracy.

The hotel is quintessential Victorian-style architecture, featuring a New England–inspired geometric layout with one commodious main building flanked by scaled-down wings and an open porch running the course of main building’s face.

The splendor embodying the ethos of Lake Tahoe’s fin de siècle Victorian resorts was brought to the world courtesy of Elias “Lucky” Baldwin, the profligate resort owner who built an elaborate mansion on the current grounds of South Shore’s Tallac Historic Site. From the vast veranda encircling the rectangular mansion to the large dormers protruding from the steeply sloping roof, the opulence of the large resort still stands as a symbol of the Victorian excess. 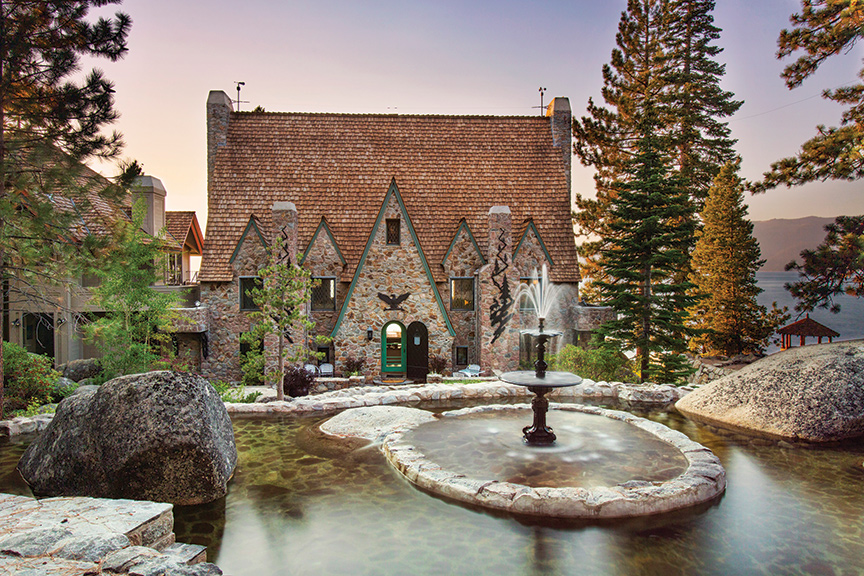 In subtle ways, the Gilded Age at Lake Tahoe featured the continuation of the Victorian architecture that took a nod from the mountain resorts dotting the Catskills, Adirondacks and other mountain playgrounds for the wealthy. However, the Arts and Crafts, or American Craftsman, style began to incrementally encroach into Lake Tahoe design territory, most properly evinced by Vikingsholm, built in 1929 at the behest of Mrs. Lora Josephine Knight.

The Arts and Crafts style emphasized the value of individual human labor as the effects of industrial mass production simultaneously marginalized those contributions in several areas of the increasingly modern workplace.

The 38-room mansion abutting Emerald Bay typifies the movement in that it required a labor force of more than 200 workers to cut the locally culled stone, hew timber from the surrounding forests and gather the granite from a quarry created in the backyard of the house. 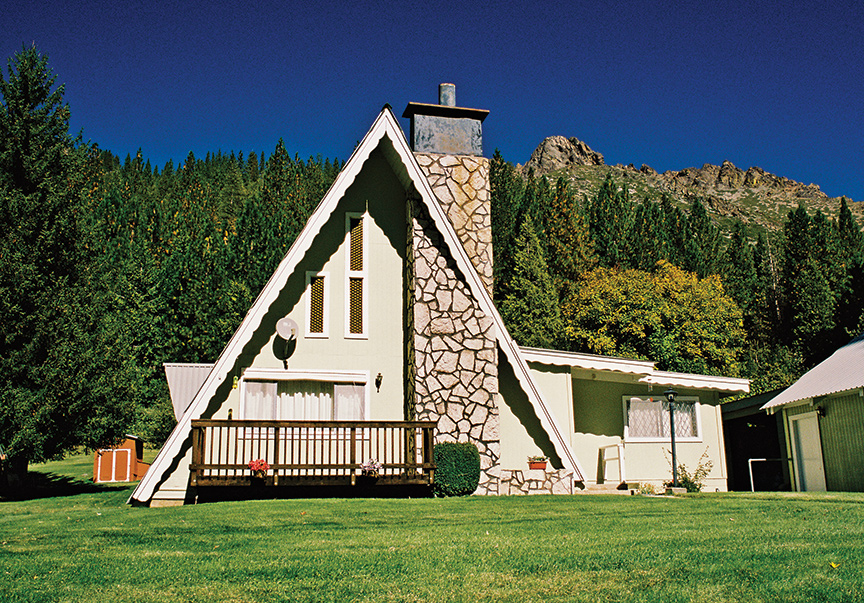 Lake Tahoe was primarily an aristocratic destination until the post–World War II era introduced a level of prosperity to an increasing number of Americans.

The A-frame, perhaps the most recognizable structure form around the Lake Tahoe Basin, came to evoke the post-war leisure culture.

While the triangular form was simple to the point of being archaic (it hearkens back to Martis pit houses), there was ample room for variation and individual expression.

The pitched roofs with steep slopes that sometimes plummet all the way to the earth are ideal for shedding snow loads, which can be particularly heavy in the mountain range known for “Sierra Cement.”

The growing popularity of skiing, attributed in part to the 1960 Squaw Valley Olympic Games, and an increase in disposable income, helped give rise to the A-frames in Lake Tahoe. In 1960 alone, about 125 A-frames sold in Squaw Valley for $15,000 a pop. 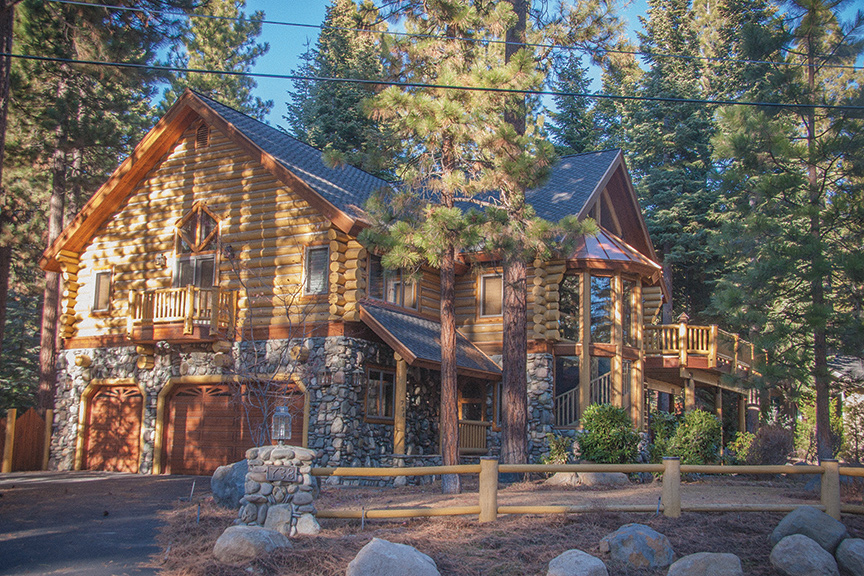 What is referred to as Tahoe style is not unique to the 1970s, but the style really took off in popularity in the decade and continues to heavily feature in submissions to the planning departments of the five counties comprising Lake Tahoe.

The Tahoe style is American Craftsman with a more rustic bent, meant to evoke the area’s surrounding topography leaden with rock outcroppings, towering gymnosperms interspersed among the chaparral and manzanita, and the swaths of granite flecking the serrated ridgelines.

Salient elements of the Tahoe style include wood or masonry buildings providing the foundation for a gabled roof designed to slough off heavy accumulations of snow. The style features elaborate stone chimneys, projected entrance bays and intricate decorative ironwork.

Designers used the pine, fir and river rock endemic to the geographic area for flooring and the interiors are paneled with heavy wood with horizontal lines leading to planked doorways. 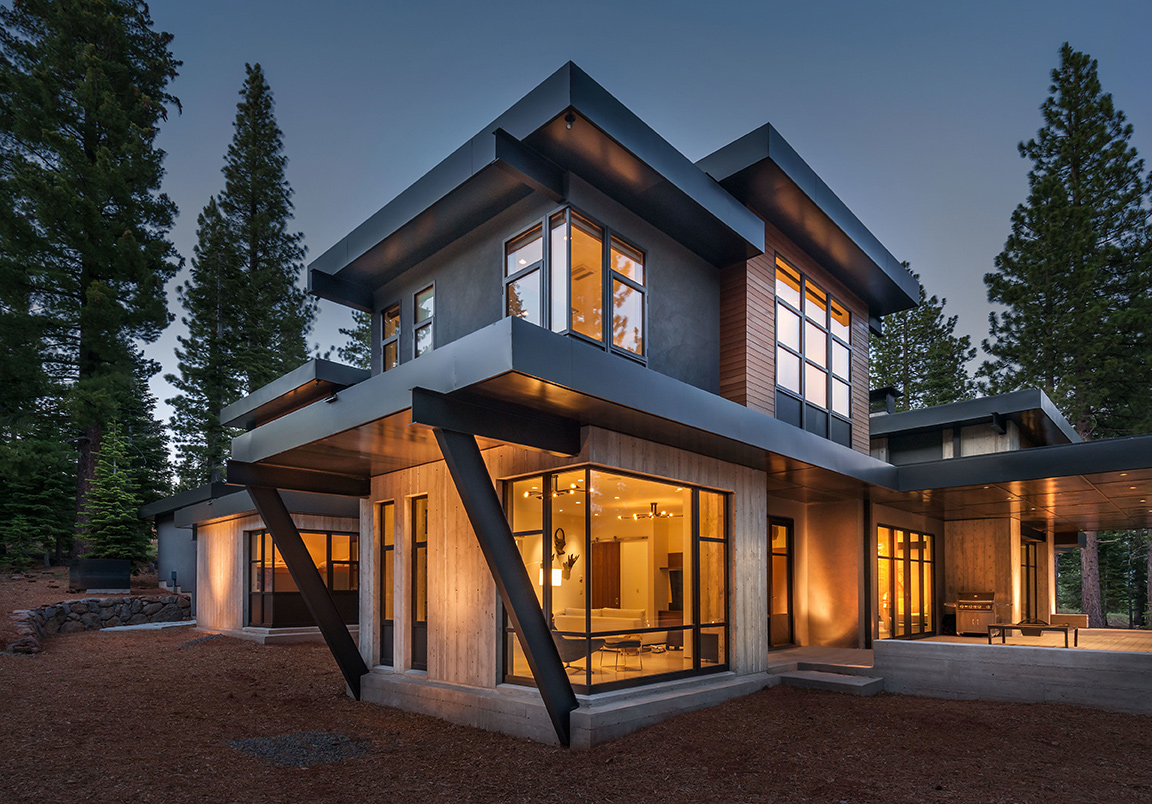 Martis Camp and isolated pockets around The Lake afford specimens of a new and emergent architectural trend, which places an emphasis on flat roofs, minimal to no eaves, a dearth of exterior ornament, open floor plans and large panels of glass bolstered by long, indefatigable spans of steel.

Crystal Bay’s Cliff House (See Tahoe Quarterly’s 2012 Mountain Home Award cover) personifies the cliché of living in a glass house. It was designed by San Francisco–based architect Mark Dziewulski and is unlike any other habitation in the High Sierra. An 8,300 square foot house largely constructed of paneled glass, steel frames and dark exterior finishes, it is designed to limit reflectivity and ensure the building blends in with the surrounding landscape.

Meanwhile, Martis Camp, the 653-lot development in the valley to the south of downtown Truckee, has acted as a showcase for a band of modern architects looking to display their savoir faire.

The neighborhood’s design standards embrace a full range of architectural styles. One can find a modern American Craftsman house, a mansion evocative of Old Tahoe style and a home with the clean lines and minimalist composition of the Bauhaus style on the same street.