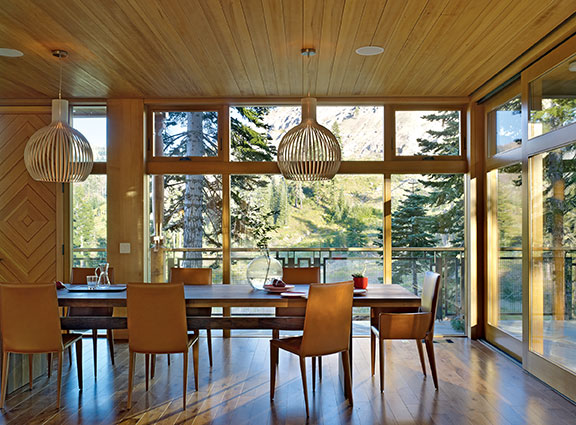 Perched on one of the highest residential reaches of Sugar Bowl, the Crow’s Nest exists as a nod to both the mountain and skiing.

Designed by a multi-generational Sugar Bowl skier for a fellow lifelong Sugar Bowl skier and his family, the butterfly-roofed modern design with rustic tendencies stands balanced on a ski slope. One side of the house looks down the slope to Sugar Bowl, the other upwards into the forest, with stunning diagonal views of Castle Peak and Mount Judah.

“The house feels both comfortable and exhilarating,” says Hans Baldauf, principal architect at San Francisco–based BCV Architects. “That exhilaration is what being in the mountains is about—the house has that feeling you get just before you push off on a ski run, the balance of that moment.”

Designed to withstand snow loads of ten-plus feet (a second-story entrance can also serve as a grand entrance if the ground floor is snowed in), achieving that balance required an elegant but muscly design and a build team willing to work within the parameters the resort laid down. Accessed by a dirt road in summer and snowmobiles in winter, building the Crow’s Nest was no easy feat.

“The main challenge is that the house is built on a ski run,” says Paul Zarubin, owner of Truckee’s Mt. Lincoln Construction, the general contractor on the project.

With previous experience building at Sugar Bowl, Zarubin understood the resort’s restrictive rules—materials and personnel must be snowmobiled to the site in winter along very specific routes at less than five miles per hour. Contending with subcontractors who valued time above those considerations was sometimes difficult, but not nearly as difficult as dealing with Mother Nature following the monster winter of 2010–11, when Sugar Bowl was open for Independence Day skiing. Builders broke ground that summer—one that didn’t start until July.

“Once we got the snow off the lot to give it time to dry out and broke ground, it was early August,” Zarubin says. 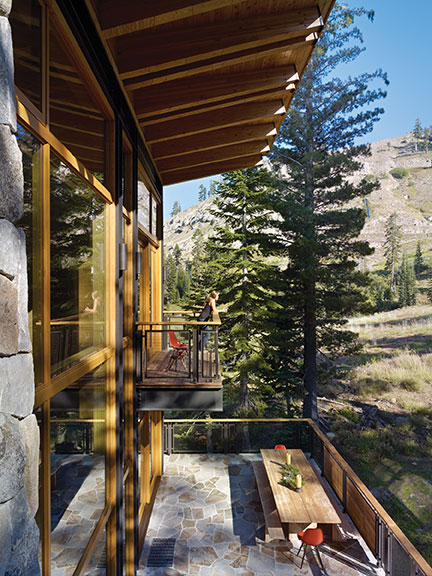 The wood, glass and concrete exterior, with steel accents, sits below the aforementioned over-engineered roof.

“It’s a multi-folded, double-sloped roof—a butterfly roof on an angle,” says Jennifer Smith, the BCV project manager in charge of the Crow’s Nest. “The radial beam pattern resolves the geometry nicely. The house is really about the diagonal, the radiating beams guide your eye to reinforce those views.”

The boxy exterior opens on the ground floor to a series of concrete arches and concrete flooring. The dominant interior material—western hemlock—is immediately apparent upon entry and melds nicely with the homeowner’s request to balance a rustic look with a modern feel.

Western hemlock was chosen for its richness of color and the priceless quality of not becoming orange over the years, Baldauf added. 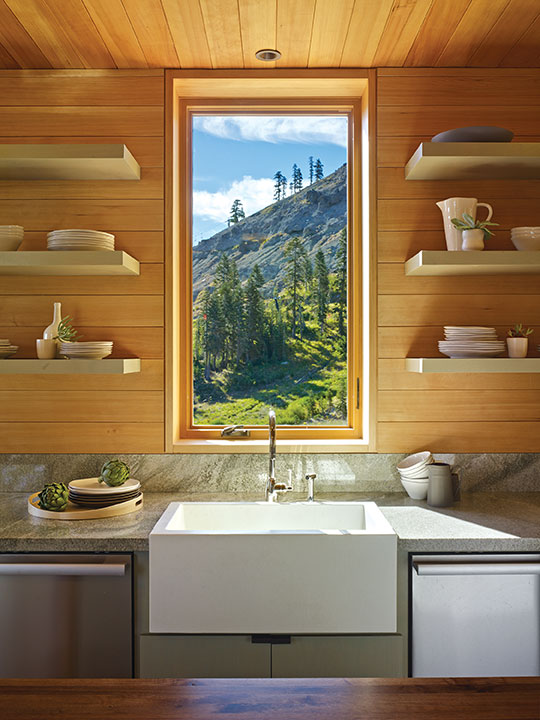 A kitchen window captures views of the slopes of Sugar Bowl

Clean lines are an indelible factor in the home’s design. Built on a 5.5-inch datum, every board, shelf, window and door in the house lines up on the measurement from the foundation to the roof. Meeting the exacting standards wasn’t a cakewalk, Zarubin says. The ground floor is expressed on the exterior with board-formed concrete, and the building process was delayed while the concrete subcontractors worked the exacting datum specifications into their process, he added.

“Even on the floors, you have to subtract your underlayment and the flooring to hit that line,” says Zarubin. “Even the spice rack, everything has to hit it.”

Despite the prevalence of wood and concrete on the ground floor, splashes of color brighten spaces throughout. A powder room adjacent to a steam sauna immediately to the left of the entrance features bright multicolored glass tiles from Ceramic Tile Design in San Francisco around the vanity and on the back wall. Set against raw concrete, the tiles make for a sharp juxtaposition, a key for the homeowners, who adore color, says interior designer Lisa Staprans, the Portola, California-based owner of Staprans Designs.

“We wanted to keep popping colors throughout the house,” Staprans says, noting the reds in the tile mimic the red pendant Niche Modern glass lighting over the kitchen island. “It’s cool how you can layer all these things and see [the colors] again and again in the house.” 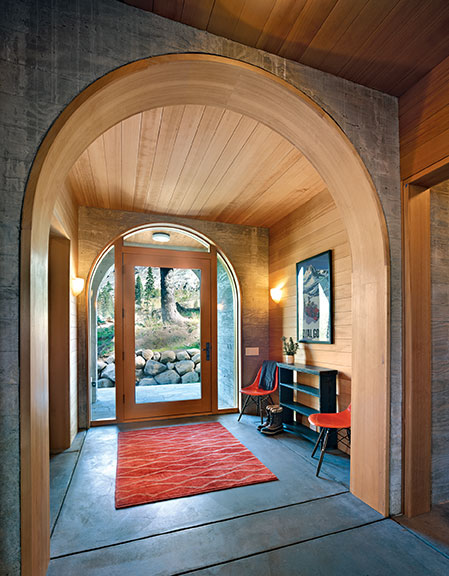 Arches create the structure on the lower level

In addition to a mudroom and storage, the family’s media room is also on the ground floor.

Decorated in a mixture of Dutch modern and mid-century modern, the interior is whimsical from top-to-bottom—an egg chair invites visitors to have a seat on the way up a generous staircase to the main level on the north side of the house.

The staircase provided one of the funnier stories in the tale of constructing the home. Engineered by BCV as a free-standing entity, the builders inserted a steel post to support it in construction.

“The engineer came after that and said ‘What’s that support post doing going all the way up?’” Zarubin says. “We told him ‘that’s the support,’ and he said ‘I don’t want the support there.’”

The building crew checked the plans, and sure enough, no post.

“So the steel guy comes back, cuts out the post and the staircase didn’t move,” Zarubin laughs. “It was one case where the architect wins.”

The extra-wide, well-lit staircase—connecting all three levels of the house—fit the family’s wishes in providing another place for people to sit and socialize.

“It was conceived as a sculptural object, and a social space, a place to sit and look out the window,” Baldauf says. 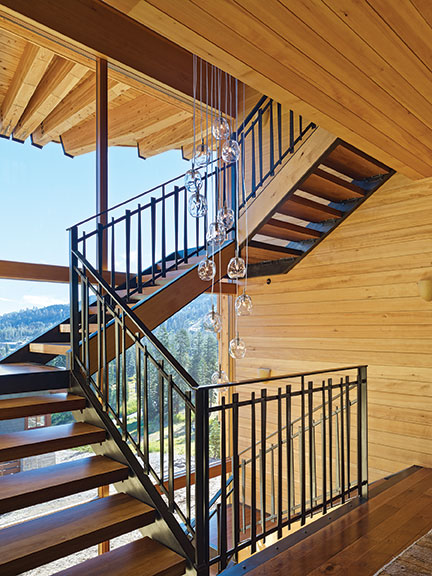 On the main level, the view opens up to a large deck overlooking the forest on the south side of the home, with massive windows accommodated by a double-height ceiling to take in the sight.

“We wanted a very tall space that would allow the presence of the trees outside to be completely felt inside,” Baldauf says. “We didn’t want you to look out and see a big tree in the distance.”

Large, peeled-wood columns made of Douglas fir wrap around steel beams in the slightly sunken great room,  evoking the feel of a large tree trunk inside. Hickory flooring complements the western hemlock walls.

Separating the great room from adjacent spaces on the right is a large, granite fireplace, with stone sourced from both the Sierra and Idaho. The masonry carries outside, creating a strong stone column. To the right of the great room is a cozy and casual playroom for the homeowners’ four children, with a Moroccan fuzzy carpet and retro chairs in clean white and blue around a table, lit by birch wood pendant lights from Secto Design. Beyond the playroom is a large sitting room with green Design Within Reach chairs.

Immediately to the left of the great room is the kitchen, with a center island, mosaic backsplash and stainless steel range hood. Views look out diagonally to the resort. The dining room is highlighted by a reclaimed teak dining table from Berkeley’s the Wooden Duck situated under birch wood pendant lights. 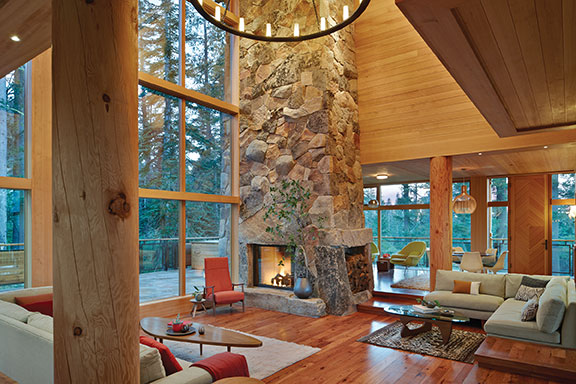 Stone from the fireplace came from Sierra Nevada and Idaho quarries

A large, stone-floored deck off the great room is cantilevered off the ground floor. Wrought iron railings accented with wood ring the space, and hydronic heating keeps feet toasty even on cold days. The orientation of the deck takes its cue from the Lodge at Sugar Bowl, designed by William Wurster.

“We oriented the deck at the same southwest angle as Sugar Bowl’s lodge, so in the summer you do get shading and in the winter you get sun on that deck,” Baldauf says. The space calls the family home for lunch during a day of skiing.  A small covered barbecue area, held aloft by two clear cedar turn posts crafted by Reno-based artisan Ron Borst, provides a sun shade for the cook.

On the top level, the children’s rooms face to the north and include punched corner windows taking in diagonal views of the surrounding topography.

“On New Year’s, I was in there with the kids and they were gathered at the corner window as people were shooting fireworks off,” the homeowner says. “They really enjoy those spaces; it’s a great place to read and enjoy the views.”

The master and guest suites both have walk-out decks and look into the forest on the south side of the home.

“You’re surrounded by the view, much more so than the children’s rooms because those needed to be sheltering, the small windows are there to provide glimpses from bunk beds,” Baldauf says. “Whereas in the master suite and guest suite, the drama is really admired through the height of the windows.”

For a skiing family, is there anything better?