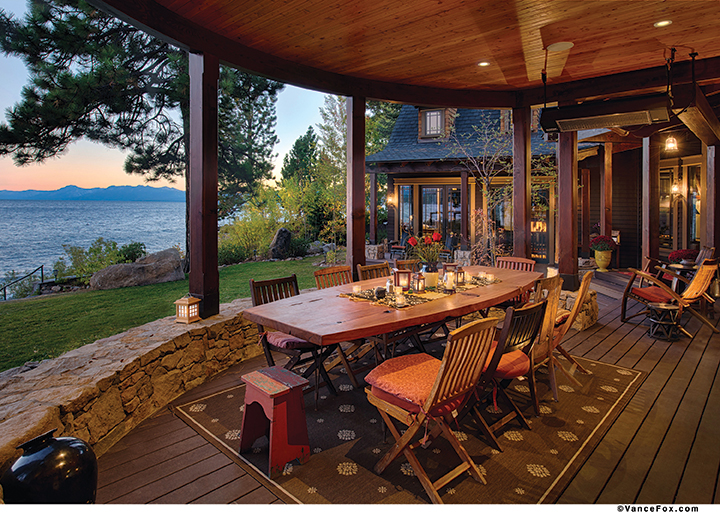 Authenticity. It’s a concept oft aspired to and more often not completely fulfilled.

At the bottom of a winding driveway of four-inch-by-four-inch granite cobblestone in Carnelian Bay, though, sits a beautiful Old Tahoe manor come-to-life in a modern context. Just how did they achieve such detail-oriented authenticity? Four inches at a time, as homeowner Ron Jenny and others painstakingly laid out the cobblestone.

It all started 46 years ago, when Ron and his wife, Jane, honeymooned in South Lake Tahoe. They fell in love with the area and returned time and again, eventually buying or building homes on the North Shore. Every summer, the family made the trek from Malibu to Tahoe to be near The Lake and the pine trees.

“This is almost a culmination of all those years of loving Lake Tahoe,” Jane says. “It has always held a very special place in our family’s heart.” 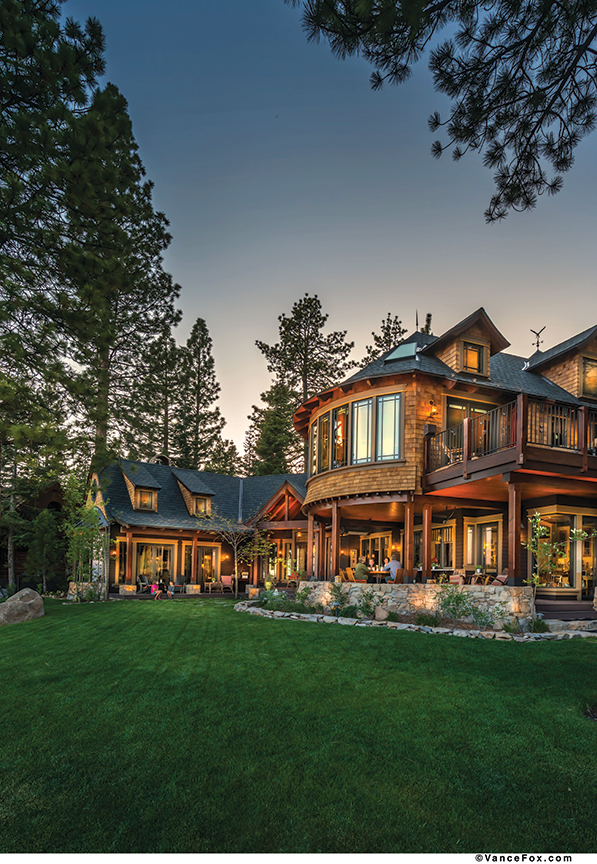 A large yard leads from the rear of the home down to The Lake, photo by Vance Fox

In 2008, the Jennys purchased Tewesi Manor, a lakefront property that included a 1920s Tahoe main house and a guesthouse. Although the original owners thought Tewesi meant “welcome,” elders of the Washoe Tribe say it actually means “people from far away.”

While the Jennys never wavered from their decision to build an Old Tahoe–style manor, they spent four years living and entertaining in the main house as they took in all the seasons and faces of Tahoe, as well as the social and mechanical uses of the property. They knew part of the challenge would be preserving the existing beauty and history of the lot.

“We wanted to save every one of our big trees,” says Ron. “These are big Jeffreys that are all 100 years old or more. They just had to be saved.”

Not only did they design the house around the trees, they relocated and saved the main 1920s house, which now serves as a guesthouse, known as the “gingerbread cottage,” Jane says. Using steel beams and rollers, they rotated and pushed the 150-ton building to the back of the property, where what was previously a lakefront porch now faces inward. “It all ties into the authenticity,” says builder Mark Neave of NSM Construction. “Not only did we try to build an authentic house, but we actually moved another authentic house that was borderline historic and saved it, kept it on the property.” 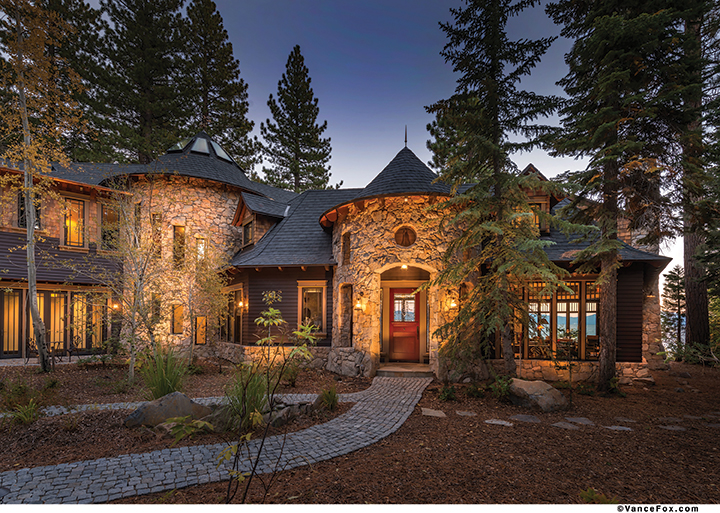 The home evokes some of Tahoe’s famed mansions, which the owners patterned the home on, photo by Vance Fox

The exteriors of the West Shore’s Ehrman Mansion and the old Tahoe Tavern, both designed by architect Walter Bliss, inspired the Jennys and served as a jumping off point for their vision as they strove to incorporate details like turrets, dormers, angles and exterior colors and textures.

“The Old Tahoe style is more of a design concept that Ron and I both were on the same page about—kind of a broad term to define something that was very specific in our mind’s eye,” says Jane.

From the beginning, Jane was at the creative helm of design. Not one, but two sets of plans were drawn up—a conceptual drawing and an architectural, structural drawing. “We had beautiful conceptual drawings from our friend and designer in Hawaii, Rick Sifuentes, who did a beautiful rendering of the exterior elevations with all of the shingles, the rock, the shiplap, the posts; all of that was rendered by hand in regular sized drawings that became instrumental in the building,” says Jane.

Roland Messier, based in Incline Village with RAM Engineering, engineered the home and drew up a set of building plans.

NSM worked carefully to merge the structural drawings with the owners’ vision for the home, building a structurally sound home while always keeping that conceptual drawing at the forefront. The Jennys’ presence on the property was crucial whenever the construction crew had questions.

“It was a day-to-day, on-site, ‘what’s next?’ There was constant collaboration. The project manager would say, ‘Jane, is this the detail you were thinking of?’” says Jane. 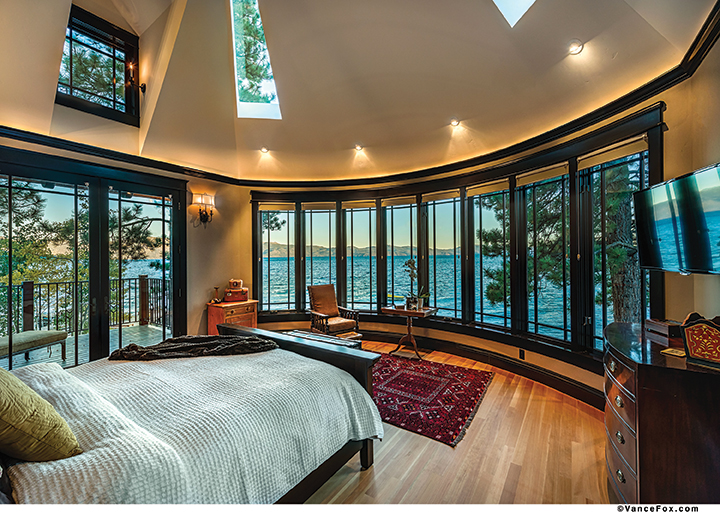 A curved window wall provides an excellent view from the master bedroom, photo by Vance Fox

No feature was too small: When Neave asked Jane what type of trim she wanted around the interior windows, they perused trim catalogues until they developed a unique design that stacked and attached several trims together, until the detail was perfect in Jane’s eyes.

Because of current structural and environmental codes, the team searched for creative workarounds to keep the authenticity of the traditional style. Typically, Old Tahoe mansions were built as summer homes and closed up in the winter, and thus didn’t need much insulation. Building materials were limited 90 years ago, and modern building codes needed to be taken into account.

“Parlaying authentic design into existing structural and building codes was something that took a lot of forethought,” Neave says.

The architecture and angles of the home, whether it was the floor plan or the roofline, all added to the challenges of building. Hammerbeam trusses adorn the main floor, providing a uniquely Old World aesthetic as well as structural support in the great room and dining room. Jane’s art studio lies tucked away toward the north end of the property, facing The Lake. A residential elevator spans from the cellar up to the second floor. Beautiful coffered ceilings and cabinetry painted in warm tones create a comfortable atmosphere in the kitchen, and a butler’s pantry provides extra storage for when family is in town. The home has three pure-radius turrets—in the master bedroom, the staircase and the entryway—which were very complicated to build, Ron says. The 18-foot radius staircase is the heart of the home, a spiraling masterpiece made of laminated curving wood and twisting steel. The lines of the landing and surrounding rooms echo the staircase’s sweeping shape.

“The home is laid out in a way that has a lot of connectivity from space to space,” says Neave. “There is not one angle that is the same. All of the angles… create intimacy without just having this slab of glass along the front of a lake. You’ve created great views from every single room no matter where you stand, but in doing that you’ve created all of these additional warm, cozy, functional spaces.”

“It’s almost like living in vignettes placed throughout the home, there are tons of cozy spaces,” adds Jane. “You sit over there and you feel like, yeah, that’s my little space.” 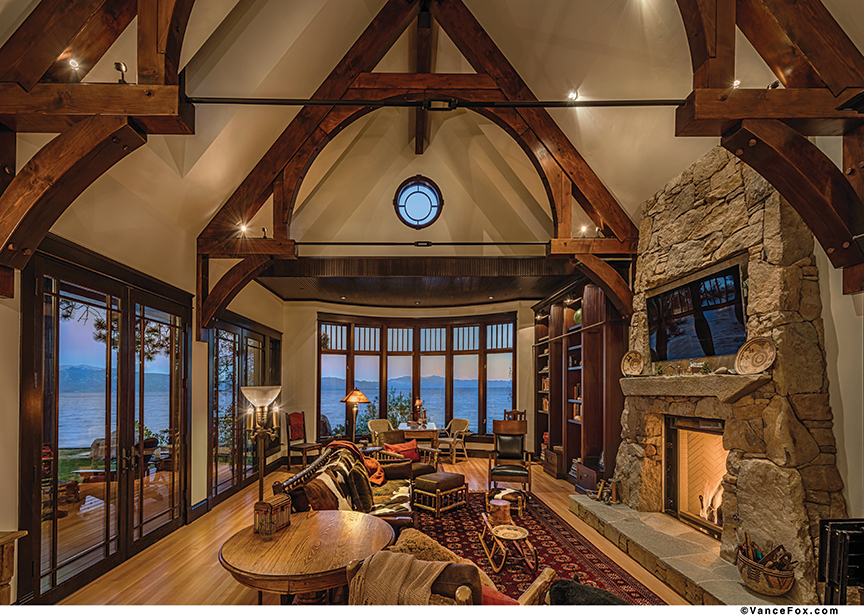 With views south over Tahoe, this Carnelian Bay lakefront home was a labor of love for the owners and
construction crews who built it, photo by Vance Fox

Even during the building process, the team kept this idea in mind. At one point, Ron saw an opportunity to move a dormer and create a perfect view of Mt. Tallac from the upstairs landing, and Neave’s team was happy to comply.

“It’s nice as builders to have something that’s unique and not cookie cutter in any way, shape or form,” Neave says.

Upstairs are two guest rooms and a game room complete with a shuffleboard table, which can be converted into a third bedroom. Ron’s office has a distractingly stunning view of The Lake through tall windows. A sun-soaked laundry room allows the Jennys to line-dry clothing, providing a touch of more Old World charm.

The master bedroom, situated in one of the home’s three turrets, features a wall of windows surrounding the lake-facing side of the room, and is completed with several radial skylights. “At night, you can see Heavenly and the lights from the [snowcats] grooming,” says Ron. “And as the sun comes up in different directions [by time of year] we get amazing sunrises.” If the view from inside isn’t enough, the Jennys, also longtime campers, can step out onto an adjoining deck where they sometimes sleep under the stars during the summer. His-and-hers closets frame the hallway, and a tall-ceilinged master bathroom with a modern take on a claw-foot tub emphasizes the home’s Old World elegance. 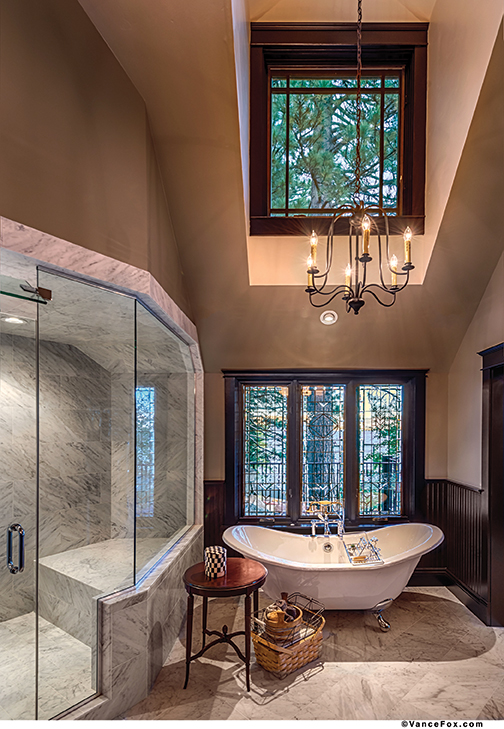 A claw-foot bathtub is the centerpiece of the light master bathroom, photo by Vance Fox

Jane designed an 18-light chandelier as well as all of the leaded glass windows—most notably in the master bathroom and in the entryway—which JoAnne’s Stained Glass in Truckee built. Jane melded her interpretation of indigenous style with modern aesthetics to create a geometric pattern honoring the area’s history with the Washoe. Old seeded glass and warped plate glass from the original guesthouse was salvaged and cut to fill the forged designs. The ironwork on the staircase and deck railings subtly echoes this same motif.

The house departs from the Old Tahoe style most in that the interior is exceedingly light. Abundant and sometimes unexpected skylights flood the home with natural light, creating a cheerful and inviting space.

For the interior, Jane preferred a simpler, cleaner design over the slightly frilly style of a traditional Tahoe estate. A classic black-and-white tile motif adorns each bathroom, yet each one is slightly different geometrically. Warm, rich ochres and umbers keep the spaces aesthetically cozy regardless of size.

The rock for the exterior finish and interior fireplaces was quarried on the property. Site-harvesting the masonry saved an enormous amount of money, says Neave, as did finding constructive ways to use reasonably priced materials in authentic ways. Extras like radiant heat help with efficiency. Medicine cabinets upstairs and china cabinets downstairs create a polished rustic aesthetic and are made of old window frames from the original guesthouse. Some of the furniture even shows the project’s creative reuse of materials, such as the oval outdoor dining table created from the original support beams of the cottage that was moved. 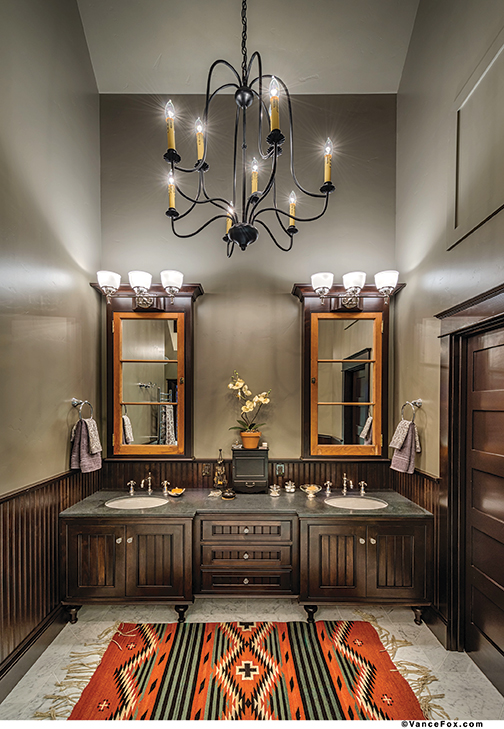 Interiors were designed by the homeowner—an artist by trade, photo by Vance Fox

“There are a lot of intricacies that go into building authenticity. It’s easy to say, ‘I have an authentic Tahoe home,’ but how authentic is it and how far are you going to hold yourself to that authenticity?” asks Neave. “A lot of people don’t do [what the Jennys did—living on-site]. You don’t see results like this in many homes, where that level of thought and passion has gone into the design over a long period of time.”

He continues, “When you look at the sum of all the artisans that worked on this home, that’s really what is creating that Old World charm. A lot of people aren’t committed to taking it to that level… The craftsmanship is first class.” 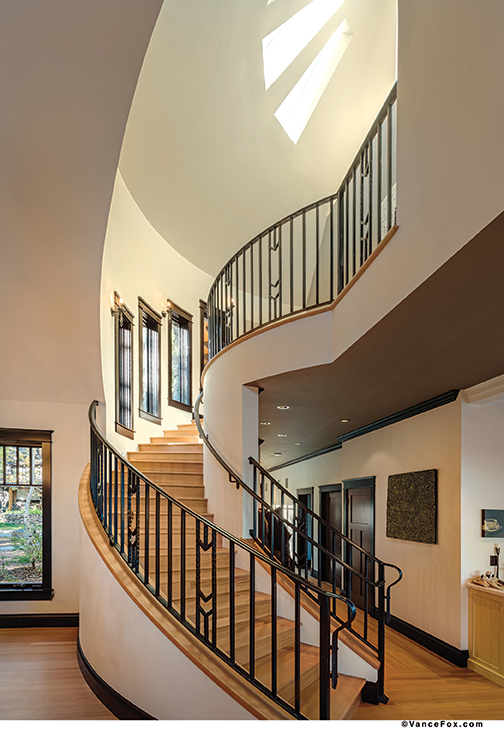 A winding staircase curves up toward the home’s bedrooms, photo by Vance Fox

With four children and their respective children, the Jennys hope that one day they will be able to pass this masterpiece on to the next generation.

“Living on-site these past four years at this house, all our kids gone, and being at the stage in my life where I’ve actually gotten involved with the arts, teaching at the senior center, different communities… Tahoe has become like a first home,” says Jane. “It is our hope and dream to see this remain in our family for generations to come.” And what could be more authentic Tahoe than that?