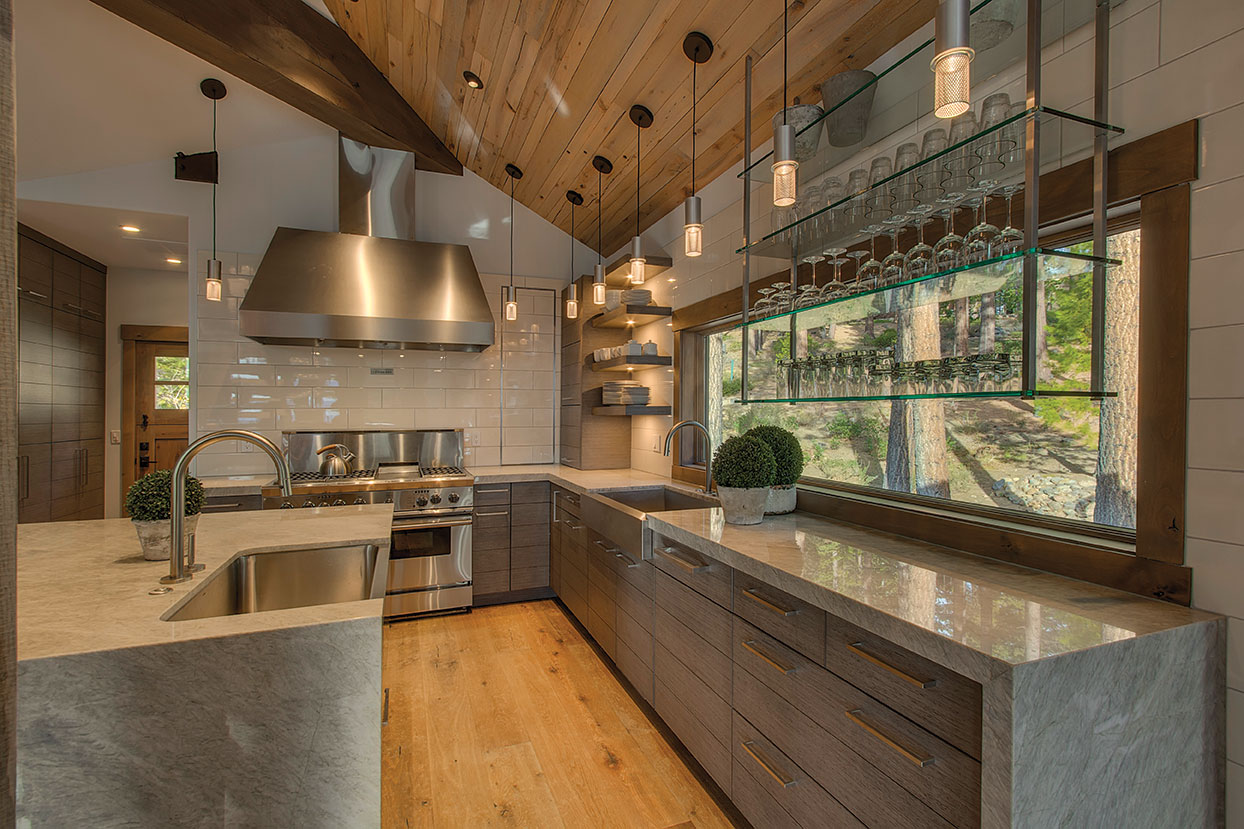 It’s about Pearsall and husband Michael Lippert’s love of the view from their mountainside abode overlooking Lake Tahoe.

“We wanted a home that was the antithesis of living in New York City,” says Pearsall of buying a second home in 2012 in her hometown, far away from the East Coast hustle-and-bustle of her full-time residence in the Big Apple. “We fell in love with the location of the home, we wanted to be inside and not see anybody. And we don’t; you look out over a greenbelt and then over The Lake.”

The story is also about what Pearsall didn’t love. For as beautiful as she found the view out, the view in was sorely in need of updating. A relic of a different era, the home was filled with blond wood, green marble finishes and dark, boxy spaces. Pearsall began remodeling, and in 2013 called in Tahoe-based designer Scott Corridan to consult on kitchen finishes.

The flaws, however, went deeper than finishes.

“I got to the house and was just thinking, ‘you have a lot more problems going on than the kitchen countertops,’” Corridan says. “I was relieved when we got to the point of the conversation where I could throw that out there.”

The two discussed a budget and timeline for a remodel and Corridan began generating ideas to open and brighten the home. Ross McMahan of Incline’s McMahan Homes came aboard as a contractor and Keith Kelly of Truckee’s Kelly Stone Architects joined the team as its architect.

They started with the home’s ground-floor entry (most of the renovated spaces are on the second floor). It was a dark staircase leading straight up to the main floor. 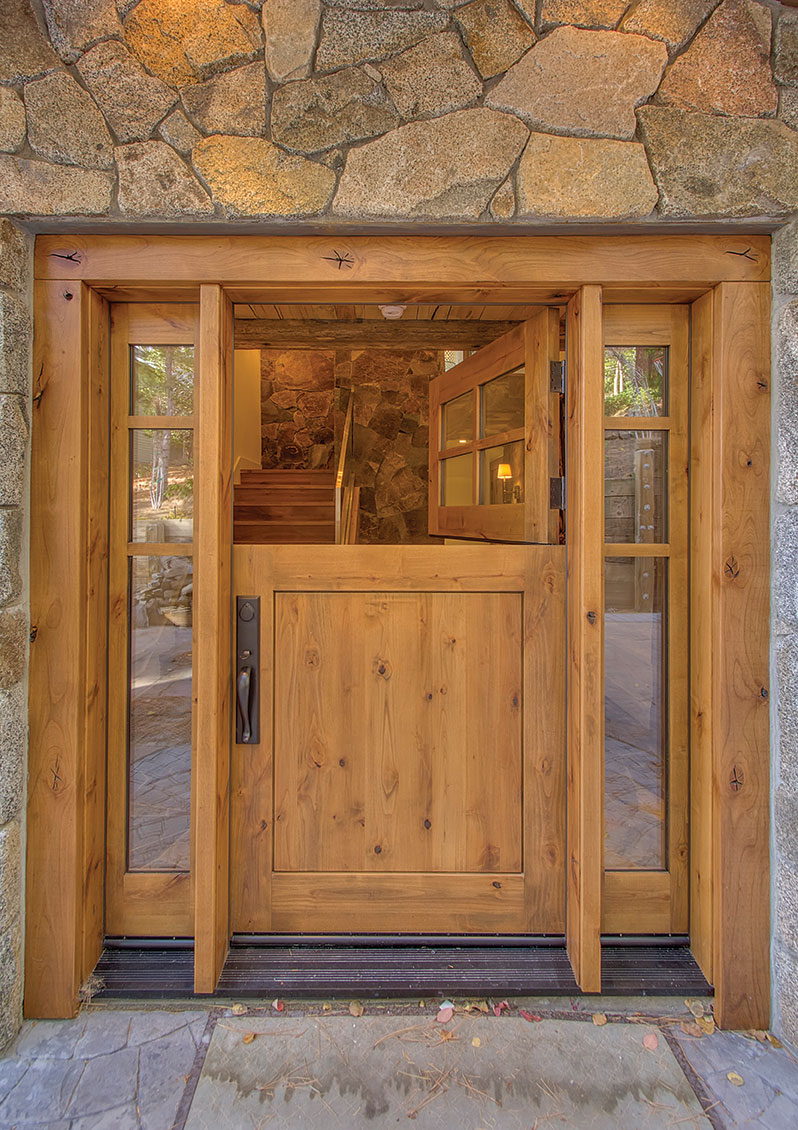 Starting at the entry, this aging Incline Village home was remodeled to bring in more light.

“The entry just sucked, there’s no other way to say it,” Corridan says. “It felt like an afterthought, and it was a challenge to make it make sense.”

The team opened up the staircase, to allow light and space. At the top of the climb, guests turn across a bridge to enter the home’s common areas—first a dining room, then a great room, breakfast nook and kitchen.

“We wanted to create an experience of adventure upon entry,” Corridan says. “By twisting and turning, we changed the view and the line of sight. By the time you get to the landing, you get that feeling of pause, and adventure. You get a ‘hello’ moment.”

The dining room centers around a gorgeous round table, which Pearsall requested because “you can be with everyone at the table and not just the person next to you,” she says. It’s far from the star of the show, however. That honor belongs to a large, vertical window that best captures the view down to The Lake. The design team blew out the original, smaller window seat and window that offered just a glimpse of The Lake, replacing them with an expanded view and a deep, spacious window seat upholstered with a white faux-fur blanket. 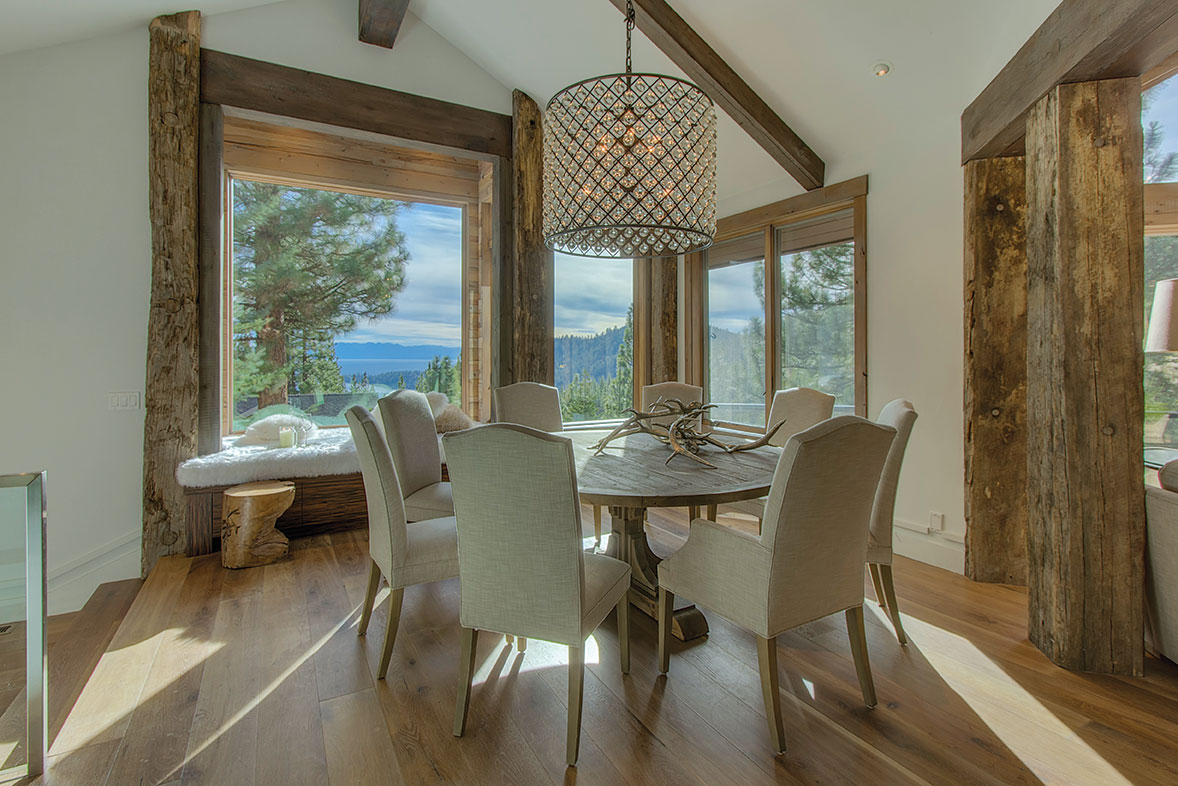 A dining room window looks out over Lake Tahoe

This cozy sitting spot looks like the perfect place to enjoy a glass of wine—and indeed, suits that use from time to time—but Pearsall says it really shines in the early morning hours.

“When we arrive in Tahoe, we’re on New York time, so my family is up early,” she says. “The sunrise comes right through that window and you can see the purples of the mountains. The view is unbelievable. I have a lot more cups of coffee there than I do wine.”

A breakfast nook serves more informal dining and is overhung by a lamp fashioned from a French barrel by Sonoma Country Antiques. Pull-out storage under the bench seating in the nook helps hide kids’ toys so the home doesn’t look like a romper room, Pearsall says.

The home’s renovated kitchen steals the show, however. Corridan brought light into the space by drastically expanding an over-sink window to encapsulate almost the entire wall. Suspended glass shelving overhangs one side to accommodate glassware, and light, bright finishes were used throughout. A large obeche breakfast bar provides a generous space for conversing, and the refrigerator was moved to an opposing wall so as not to throw light onto the great room when opened. 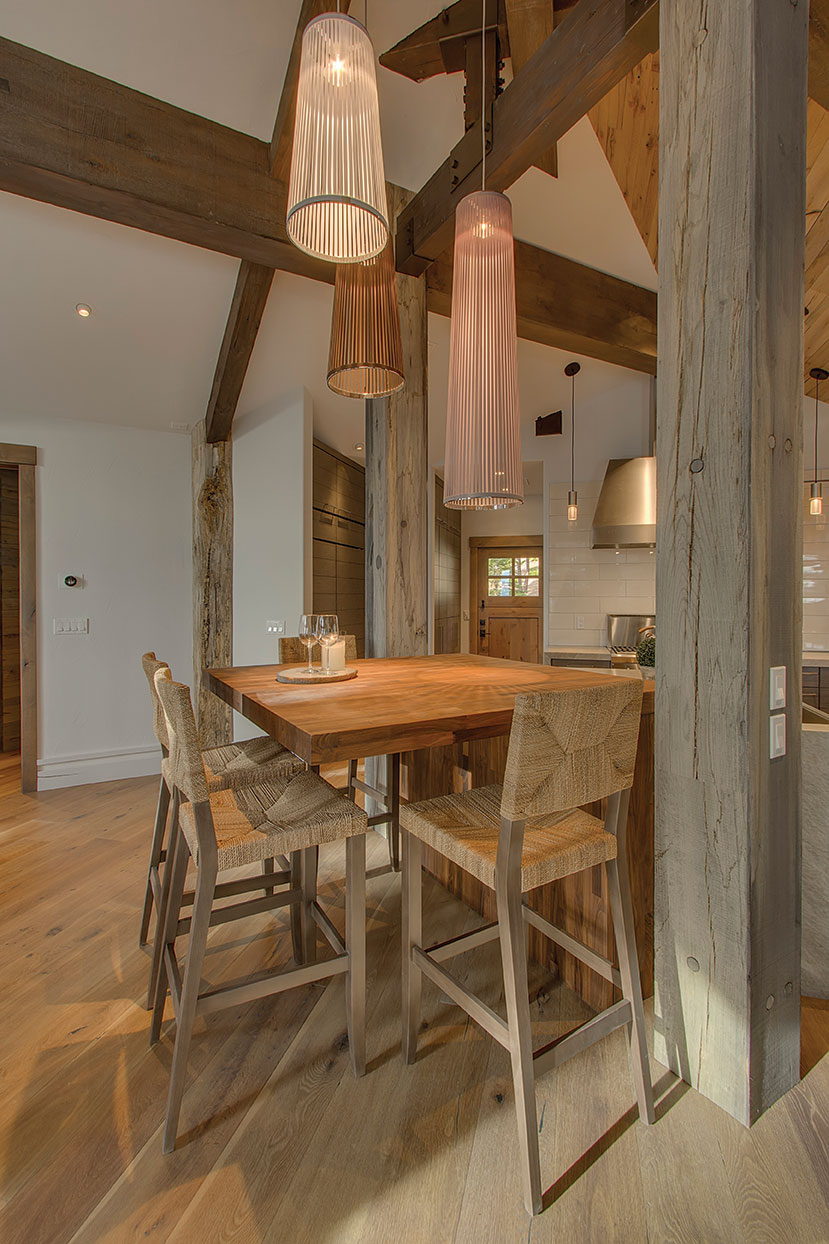 The kitchen bar is a natural conversation space.

The great room centers around a re-designed stone fireplace with steel accents. It’s one of the few common areas—along with part of the kitchen—that retained its original function because the fireplace was prohibitively expensive to move, but most everything else shifted with Corridan’s vision.

“Part of project simply became a

space planning exercise,” Kelly, the architect, says. “We took Scott’s vision and overlaid all the corresponding code and structural constraints to find solutions that fit within the existing framework of the home.”

Beyond the great room is the master bedroom, previously separated by a pair of glass French doors.

“The master was a challenge,” Corridan says. “It’s immediately connected to the great room, where everybody and their brother were hanging out.” 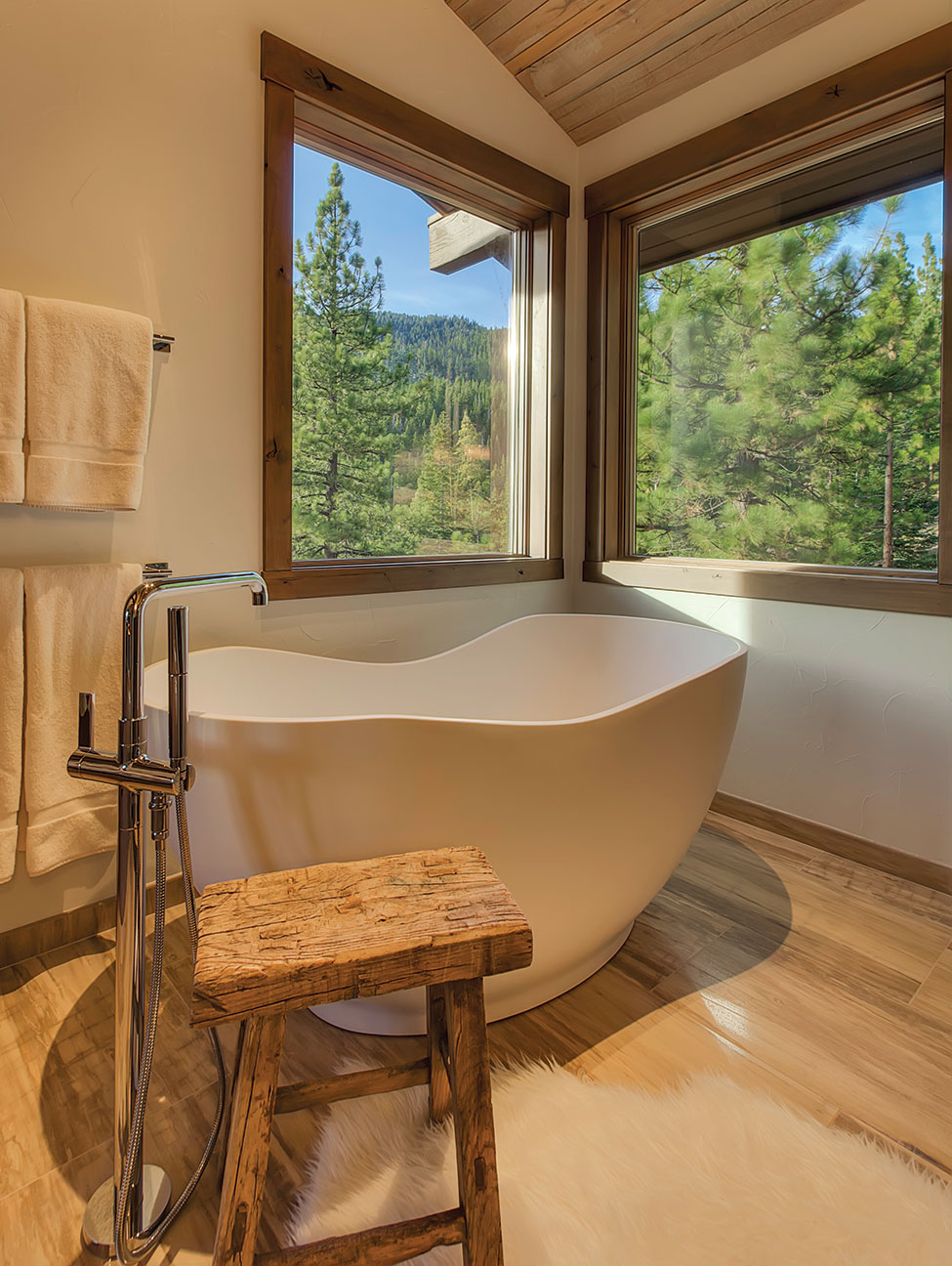 To define the separation, Corridan’s plans called for a heavy pivot door and a small, angled alcove to create a real departure from the great room. Beyond, the master bedroom opens to sweeping views down to The Lake.

In all, the project garners high praise from Pearsall.

“I felt like we had such a great team,” she says. “Scott has this unbelievable vision and Ross [McMahan] was able to execute it.”

Corridan’s summation harkens back to the love story theme.

“It was a love affair for 18 months,” he says. “It was a good example of what you can do with these homes that are in older neighborhoods around The Lake and in Truckee, on how you can take funky, clumsy spaces and remodel them into light, bright spaces.”