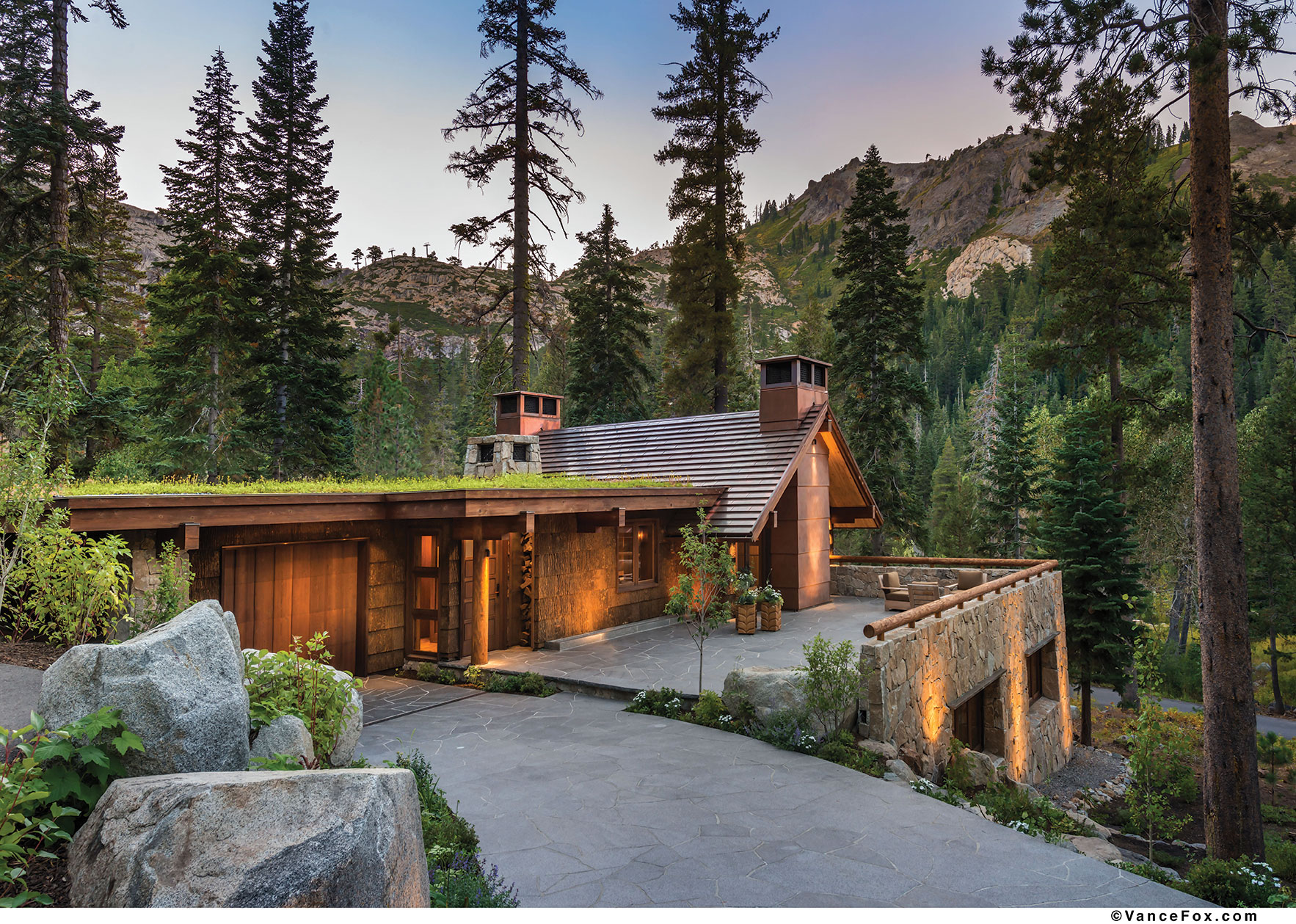 The quiet, treed neighborhood nestled deep into Alpine Meadows would appear to be the perfect retreat—from the stresses of work, life, even from the glitz and glamour of Hollywood.

For the late, British-born actress Hazel Court, the neighborhood is where she chose to retire from film with her husband, Don Taylor.

Born in England in 1926, Court studied acting as a teenager and began winning roles in British films. In the 1950s, Hollywood took notice of the redheaded beauty. She acted prolifically during the silver screen’s golden age, appearing in four episodes of Alfred Hitchcock Presents, several horrors based on Edgar Allan Poe tales and a multitude of other thrillers, as well as guest appearances on popular television shows.

“Her niche was this certain kind of a girl, a ‘scream queen,’” says Robb Olson who, with his wife, Molly, runs Olympic Valley’s Olson-Olson Architects (OOA).

Indeed, Court’s legacy is her thrillers, whether escaping from Frankenstein, playing the femme fatale or dying a grisly death, such as having her throat torn out by a falcon (The Masque of the Red Death) or being ground up for chicken feed (in an episode of Alfred Hitchcock Presents). However, in 1964, Court retired from the big screen. She married the actor and director Taylor (best remembered as Elizabeth Taylor’s husband in Father of the Bride) and wanted to focus on her family, to include a daughter from a previous marriage and, eventually, the two children she had with Taylor.

About 30 years ago, Court and Taylor bought a 1,280 square foot cabin in Alpine Meadows. The cabin dated to the early 1960s, roughly the same time that Court was ending her career as a screen siren. Here, the couple lived full time, Court focusing on her sculpting and painting, until their deaths, Taylor in 1998, Court a decade later.

Molly, who grew up in the same Alpine Meadows neighborhood, remembers the actress’s cheerful British accent and lingering perfume. Court attended Molly’s wedding to Robb solo, Molly recalls, but “she swiftly charmed guests seated at her table with the boisterous telling of her life story.”

“We always had a very good relationship as neighbors,” says contractor Bruce Olson, Molly’s father and owner of the eponymous Bruce Olson Construction. In Court’s later years, Bruce’s caretaker would often check on Court or shovel her driveway following storms.

“Because of our relationship, she requested her heirs sell the property to myself,” says Bruce. “At that time, the market was very weak—it was the recession of 2008—and I was able to purchase the property. It was a property that was close to 50 years old. It definitely needed updating and, quite frankly, a little bit of expansion.” 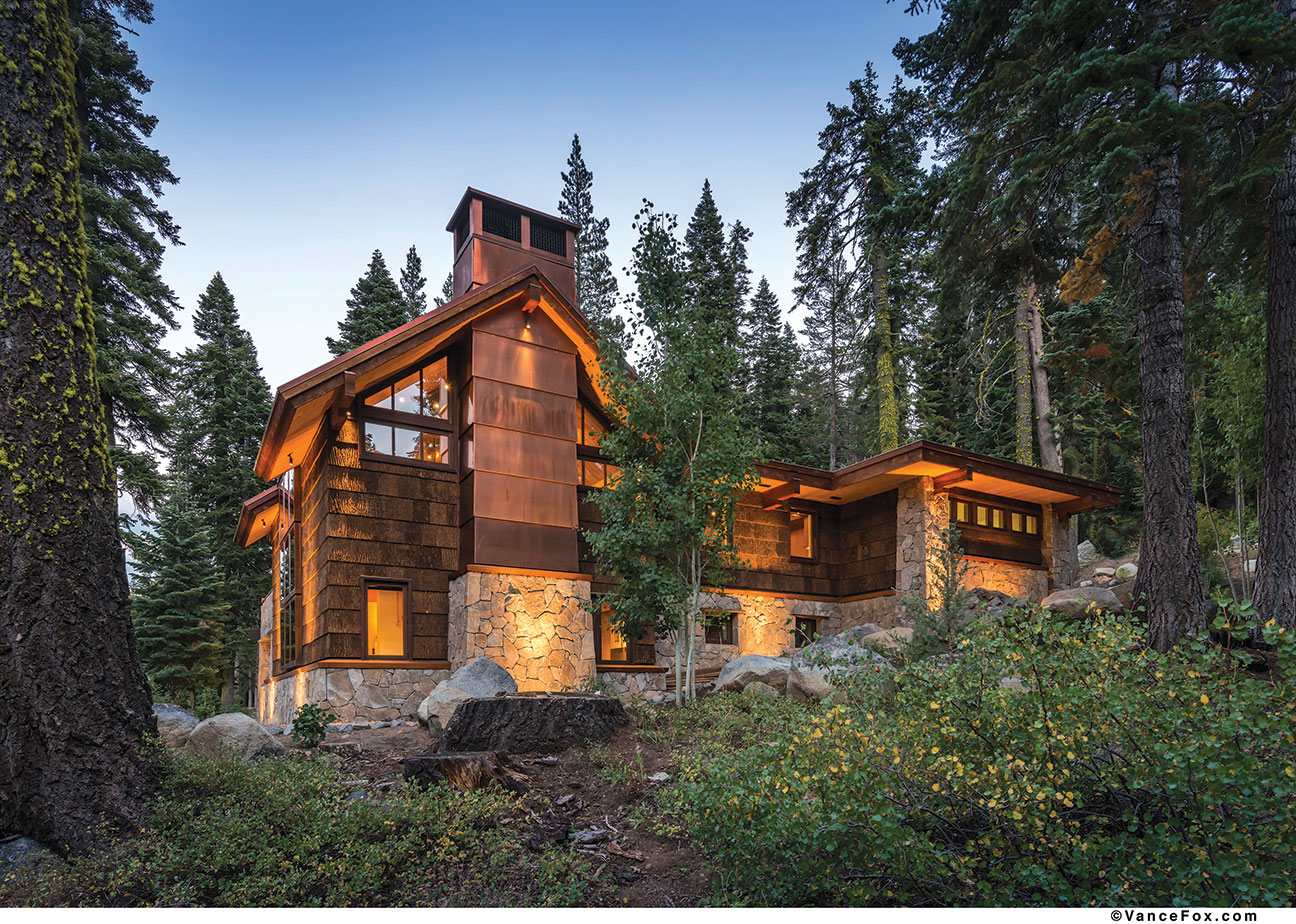 Another main goal was to protect the neighborhood’s character—nothing gaudy or oversized that would be out of place in this quiet corner of Alpine Meadows. Bruce worked with his daughter and son-in-law, who often collaborate on projects together, and between them they redesigned every aspect of the house, from the overall building design to finishes and furnishings.

“From that point, it became a passionate remodel,” Bruce says. “We were trying to take what we thought were the good bones of the basic structure and totally improve on it.”

The original cabin was dark and eclectic. The single upstairs living space included a micro-kitchen tucked into the corner of the living room. Downstairs, highlighted by a forest green carpet, were three cramped bedrooms, each with minimal closet space, and a laundry room.

Over roughly two years of construction, the cabin more than doubled, with 1,505 square feet in new living space and a garage added to the original home. Yet, even with the remodel, which also allowed for a large stone patio extending off the great room, the house slopes into its mountainside setting so that it hardly seems to take up more space than the original.

Part of that is thanks to the living roof of drought-resistant alpine succulents that the team incorporated over the garage and the upstairs addition. “It made sense to do a living roof,” says Robb. “It keeps it low profile, nestles the house down.”

It also blends the roofline with that of the original. “Achieving the effortless, flat appearance of the living roof area presented a number of challenges,” says Molly. “High snow loads, sloping for drainage, deep overhangs and space for the growing medium required exacting problem-solving to detail the roof assembly.”

The original roof was replaced with a custom copper roof that uses the Trex material most often found in decking. The pieces are milled, then each piece wrapped in copper to replicate a shake roof. The home’s exterior—which serves to further blend it into the alpine landscape—is of a natural poplar bark, which is laid flat to dry, then cut into a shake-type configuration; it was stained darker on-site to provide contrast. Both Montana and native Sierra granite are used to anchor the home and create the patio.

The front door leads into an innovative square entryway, at the center of which is a powder bathroom. One arrives at the kitchen in either direction—going past the entrance to the garage or past the built-in storage, bench and sculpture nook. The main part of the kitchen is separated from the living room—the original cabin—by a white onyx waterfall countertop that matches the kitchen backsplash. The white is bright against the warm woods used in most of the house: Flooring is from Nor-Cal Floor Design, an engineered old-growth Bavarian end-cut oak, cut to resemble six-inch-by-six-inch square end pieces. The ceiling is cedar while walls and woodwork is mostly a sapele hardwood that resembles redwood. “We used every little scrap of the sapele we purchased,” Bruce says. “I don’t think we had anything leftover in the end.” These pieces were used, for example, under the white onyx counter bar and for a headboard in one of the downstairs suites. 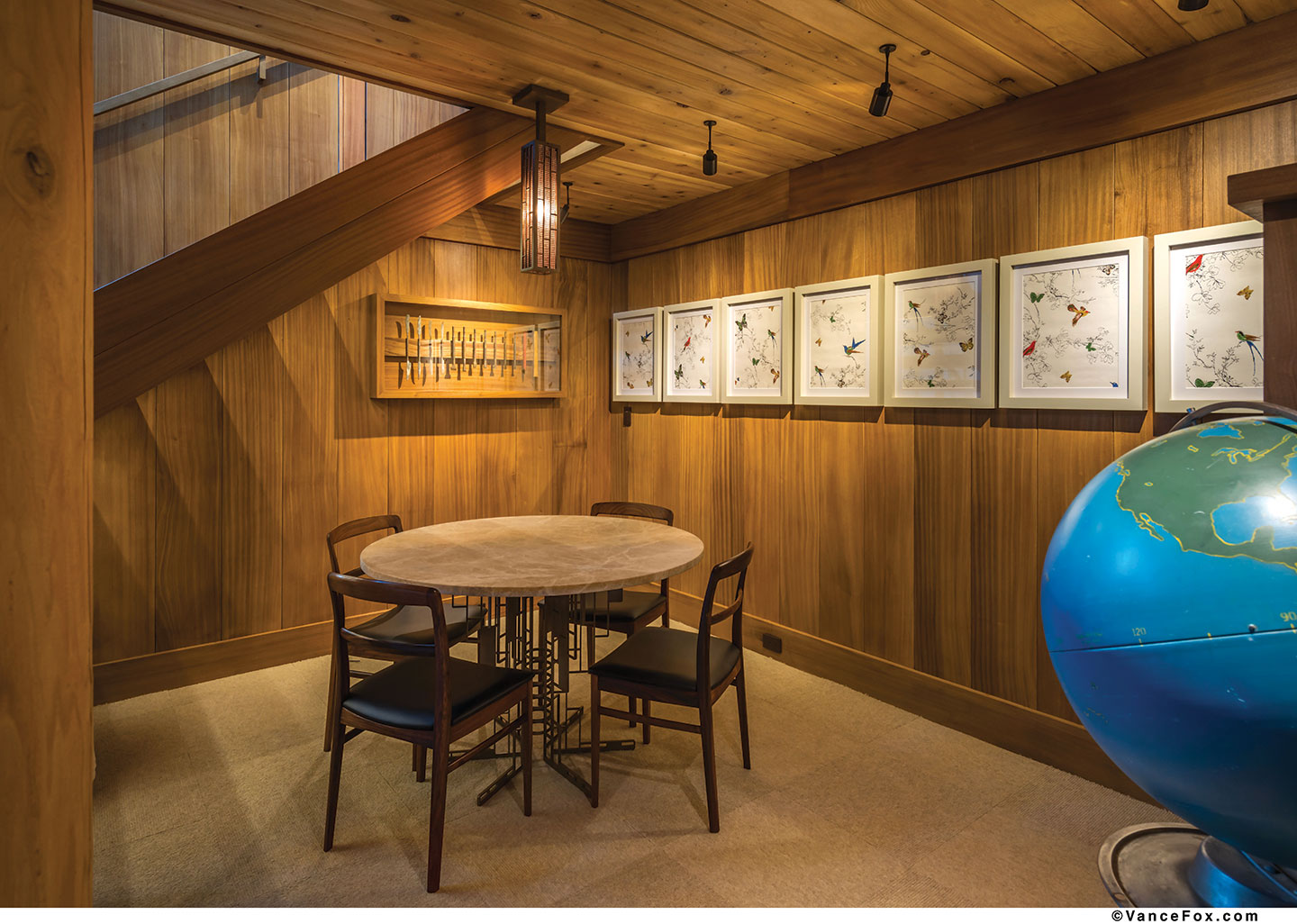 The highlight of the great room is the innovative window wall featuring a stunning view of the backside of Squaw’s famous KT-22, which the original cabin neglected. “You would have to walk up to the window, then bend down to look up at the mountain,” says Bruce.

Gridded, triple rows of skylights solved the problem, creating a view focused upward. “The original window wall that extended from the lower level to the plate line of the roof was a compelling feature that was not executed to its full potential,” says Molly. “By extending the glass to the ridgeline of the roof we took advantage of the view’s spectacular crescendo.”

Windows were expanded around the fireplace to allow more natural light and the fireplace was reworked with the same Sierra and Montana granite as the exterior as well as custom ironwork. On the opposite end of the room, the team added a bar, complete with built-in wine fridge, and two sets of double glass doors to access the patio. Don Taylor’s director’s chair, which was gifted to the team by his and Court’s children, sits in one corner of the room, while several cozy seating areas are created around the fireplace. Many of the furnishings were custom designed by OOA and created by OlsonWorks, Bruce’s fabrication facility located in Verdi, Nevada. Several of the mid-century pieces and lamps were found in vintage shops in Sacramento and the Bay Area. 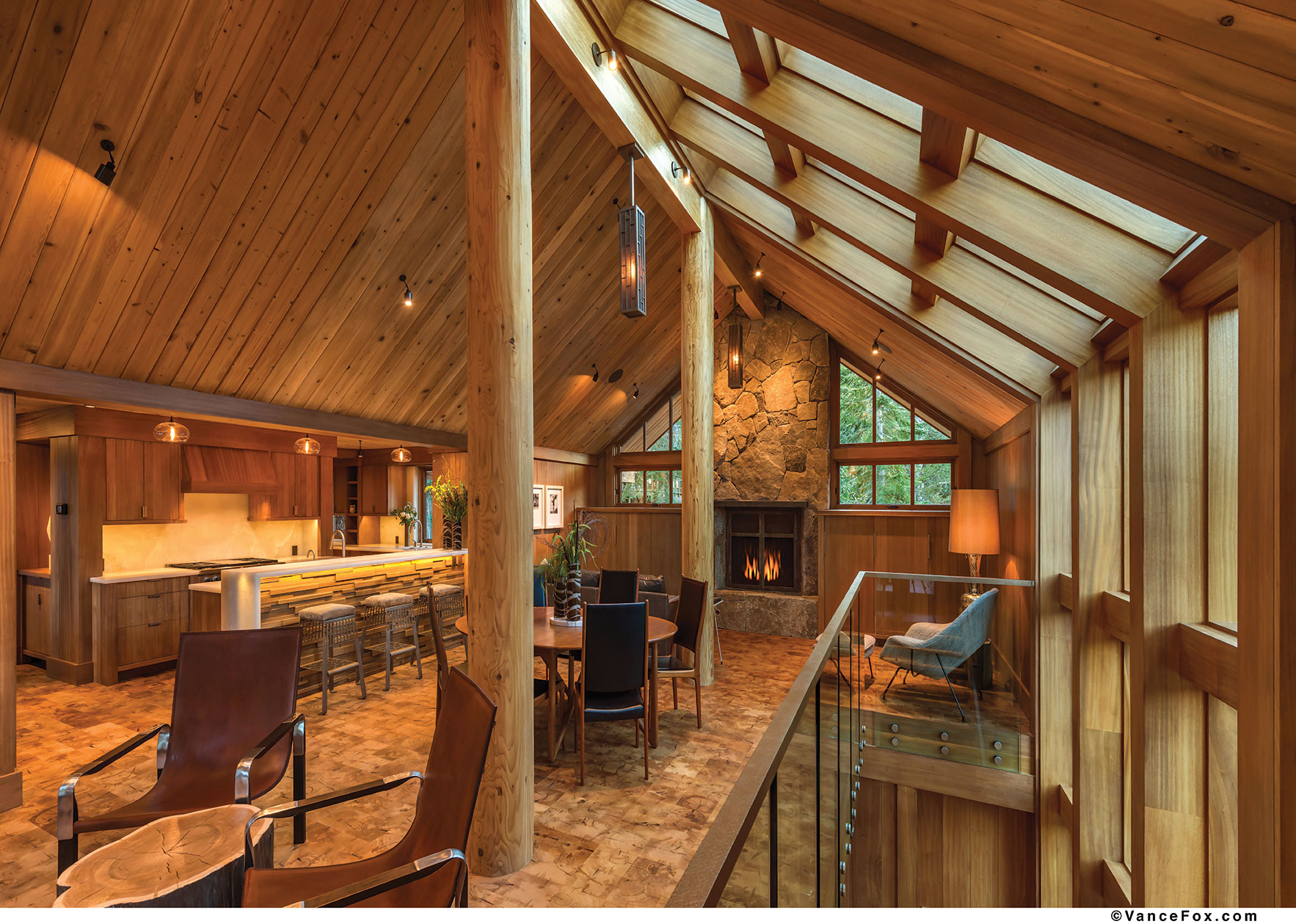 “The original residence had a modern flair, to a degree, and we continued to capitalize on that with some very fine woodworking and detailing,” says Bruce. “It’s a little more contemporary, but keeps with the mountain feel.”

Everyone on the team had a say in the interior design, which led to the well-thought, cohesive interiors both on the main level and downstairs.

“As a natural progression in our holistic approach to design we consider the interior spaces, finishes, furnishings, accessories and art during the architectural design process,” says Molly. “As the interconnected parts of the whole, the architecture and interior design must seamlessly complement each other. In doing so the whole becomes greater than the sum of its parts.” She says that, “as an homage to Hazel,” they consciously chose a subtly glamorous yet rustic palette for color, material and textural selections.

Wood-topped glass railings surround the stairwell, where the floating stairs—made of steel wrapped in wood, and under-lit with LED lighting—lead down to a spacious family area, complete with comfy couch for movie nights (perhaps a Hazel Court movie marathon?) and a table for board games.

Three en-suite bedrooms are located downstairs, as is the laundry room, which was relocated and enlarged from its original space. Additional space carved out during the remodel means larger, more spacious bedrooms, with ample windows to allow light and views, as well as heavy drapes for night. 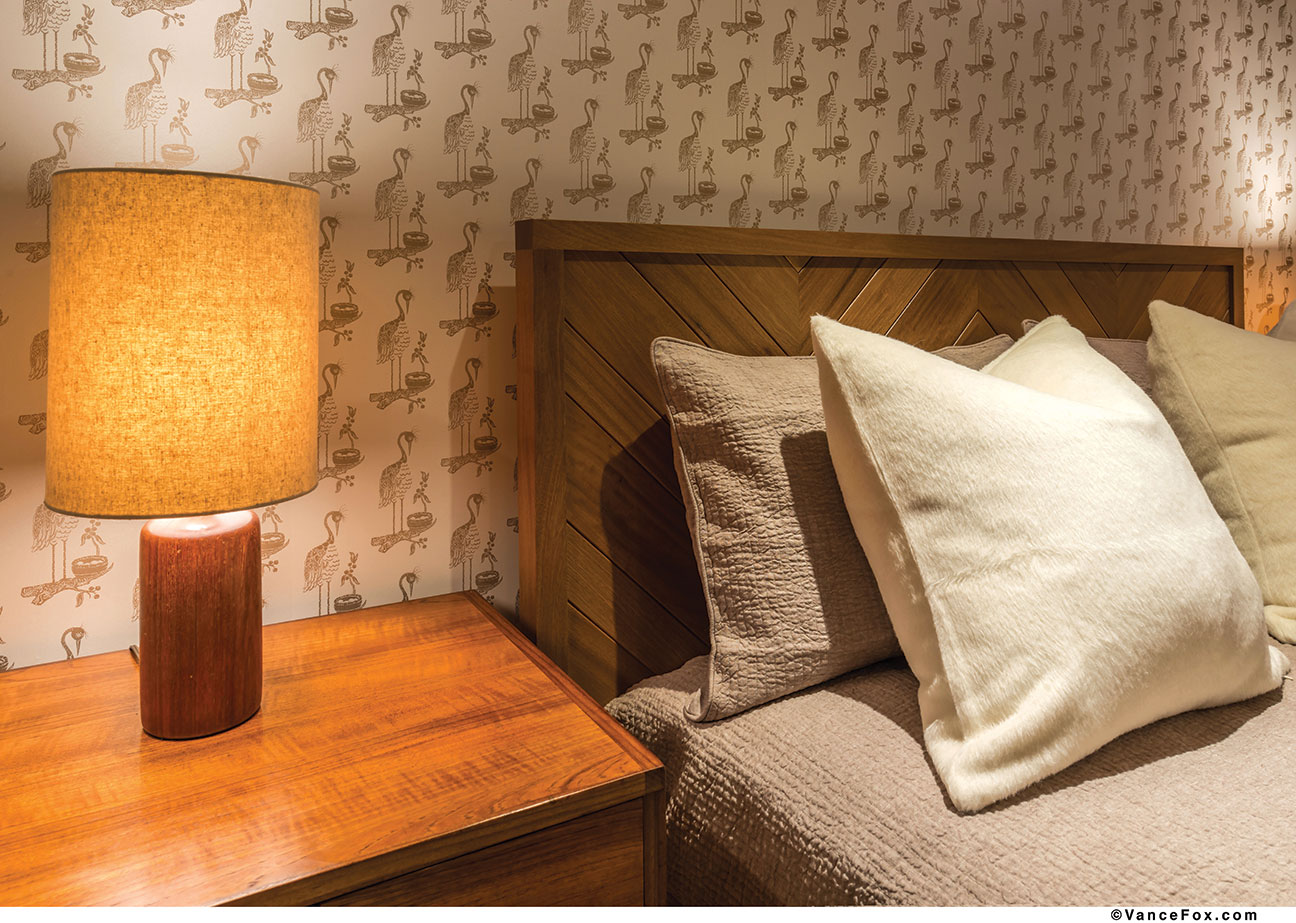 The palette is mostly woods and whites and browns, with splashes of whimsy, such as the pelican wallpaper gracing one of the bedrooms. In these bedrooms, perhaps, Court’s influence is even stronger. Movie posters—such as those from Doctor Blood’s Coffin, The Raven and Model for Murder—hang on the walls, as does an old framed copy of Picturegoer magazine. Court graces the cover, while a headline reads: “Hollywood men and their morals—startling new investigation.”

During the remodel, the team found two extra rolls of wallpaper from the original home. “We felt it important to showcase a design choice Hazel had made herself and consequently framed a series of motifs as artwork,” says Molly.

Other tributes to Court include the shadowboxes designed by Robb and created by OlsonWorks. One holds Court’s old sculpting tools, uncovered during the remodel. Another displays square, eight-inch nails salvaged during the remodel. While not what most would consider traditional art, these found pieces are cleverly arranged to act not just as decorative wall hangings, but also as visual nods to the structure and history of the home.

“I like looking at how to take something pretty utilitarian and elevate it,” says Robb. 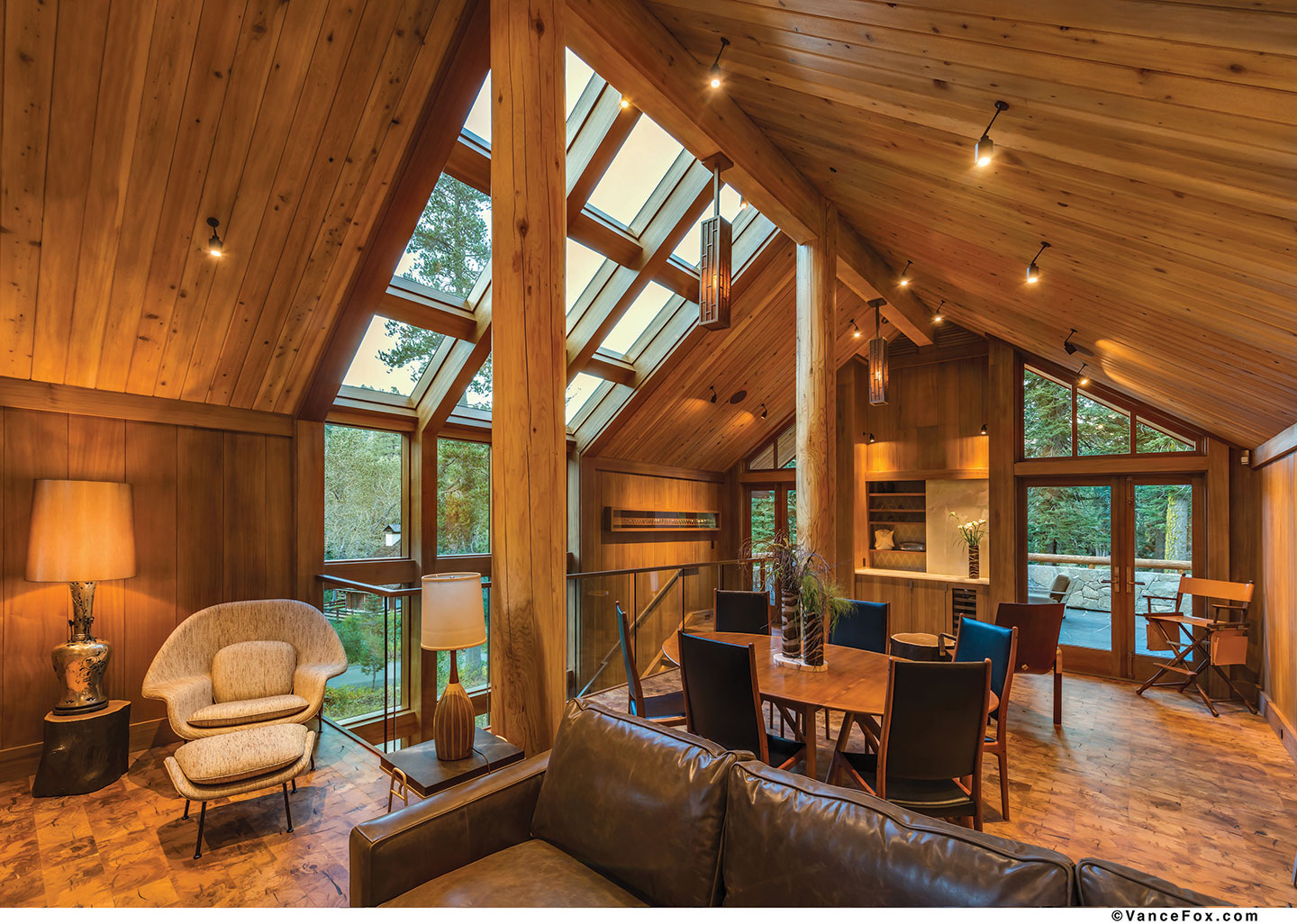 Some of the memorabilia was discovered during the remodel, other pieces, to include some of the movie posters and some of Court’s sculptures, were gifted by Court’s children, and still more was tracked down via eBay. A copy of her autobiography, Hazel Court—Horror Queen, which was released just a week after her death, sits in the great room.

Even without knowing the Hollywood history of the home’s former owner, the house is stunning—a tribute to the extensive detail and attention given by the architects and every member of the Bruce Olson Construction crew. In fact, says Bruce, the neighbors refer to the home as the “jewelry box” for its layers of intricacy and detail.

“We called this a personal project,” says Bruce, who lets friends and family use the home, which is also used as a model house and occasionally as a vacation rental. “It was very artistic and there’s a lot of craftsmanship; we’re pretty proud of it.”

The team accomplished their goals of retaining the home’s character while still feeling wholly at place in the mountains. Yet, this house is so much more than just wood and stone and glass. It evokes the British redhead in its obvious charm and its subtle glamour, in its framed movie posters and preserved sculptures, and in its mid-century allure. Even the name of the house—Hazel’s Hideaway, which is marked on a boulder at the top of the driveway—sets the stage from the time one arrives at the property.

Court was once quoted as saying, “Just in case I should pop off to heaven in the night, I always remember to wash up, punch up the cushions and straighten up after a dinner party. I wouldn’t want everyone to come in and find it a mess. It’s very English of me.”

It would appear that Court would want to be remembered for leaving behind something lovely. This home, simple yet detailed, cozy yet sophisticated, achieves exactly that—a beautiful homage to one of the golden age greats. 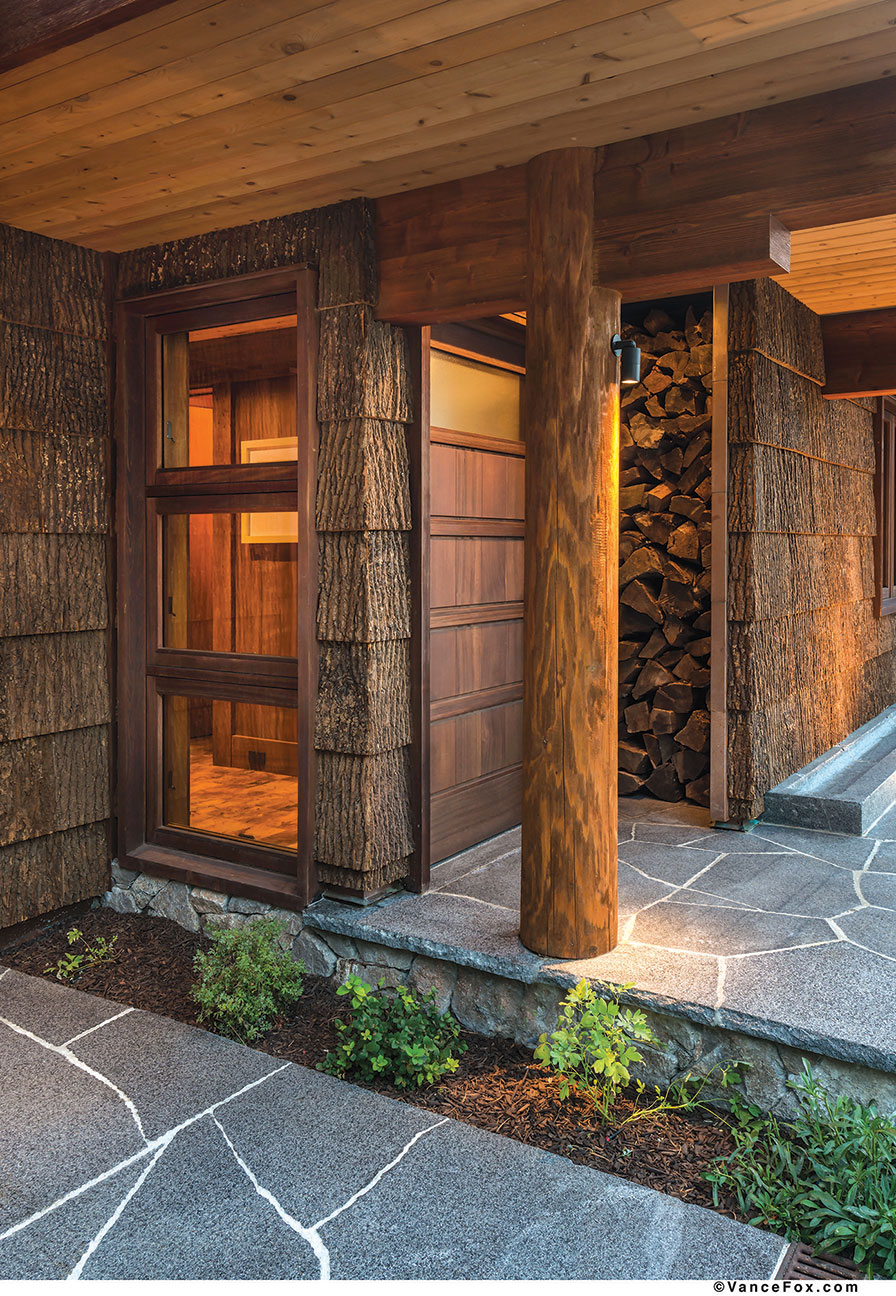