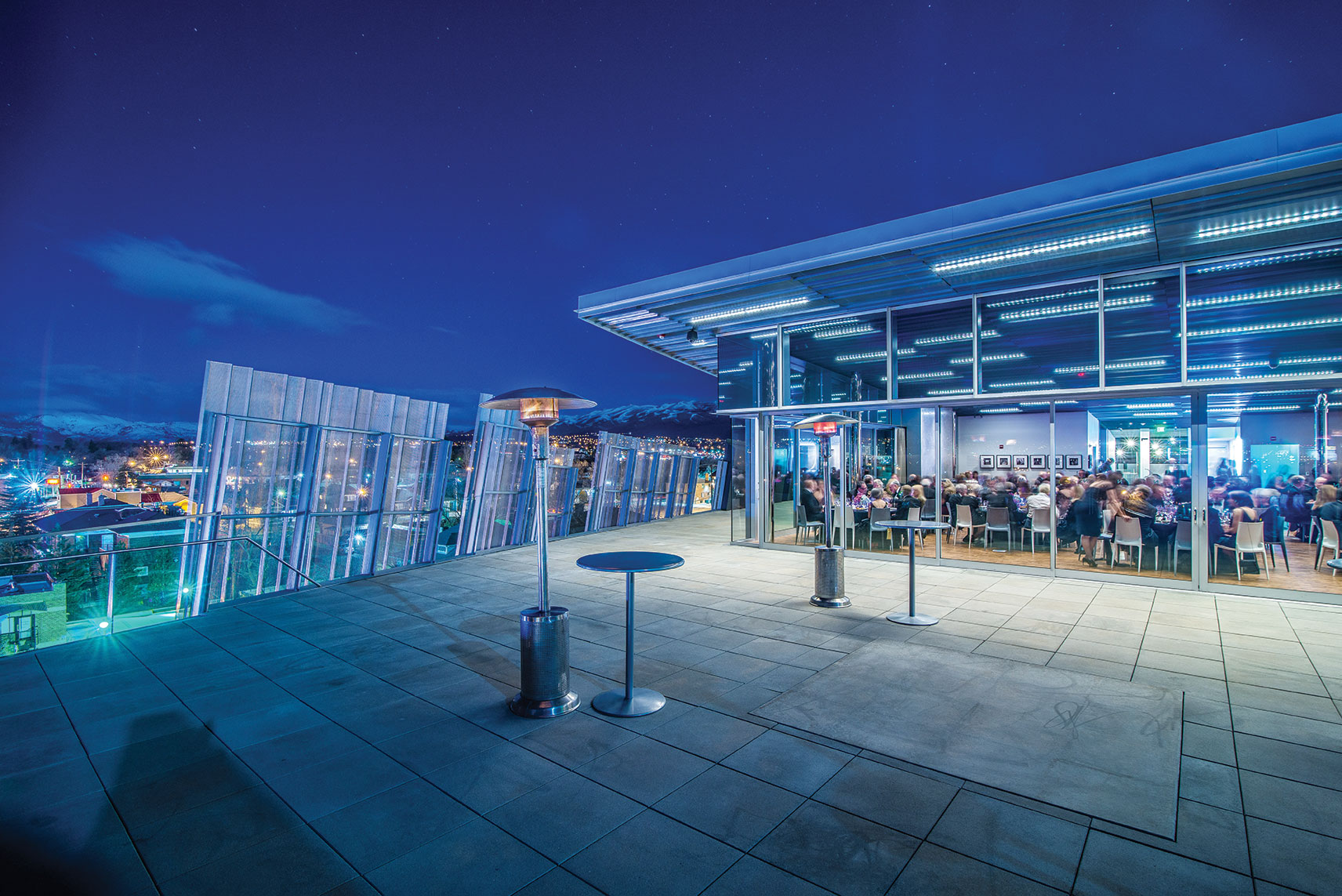 The Nevada Museum of Art's new fourth floor was redesigned into a state-of-the-art venue and event space, photo by Chris Holloman

NMA Touches the Sky with Addition

Maybe too obvious for an a-ha moment, the occasion that clarified the need for a rooftop gathering space at downtown Reno’s Nevada Museum of Art (NMA) was nonetheless revelatory for executive director David B. Walker.

In 2011, the museum played host to the Art + Environment Conference, a three-day series of talks and presentations from environmental scientists and artists that takes place every three years at NMA. The majority of the conference took place in the museum’s theater. On the last day, Walker led the 300-plus attendees to the museum’s rooftop for a reception and found they responded, strongly, to the change of scenery. Views to the south and west not only look out over Reno but to the Carson and Sierra Nevada ranges beyond, with Mt. Rose serving as a focal point for the vista.

“They looked at me and said, ‘Are you kidding me? You kept us down in that theater when you had this up here the whole time?’” Walker says.

That’s when he realized the space—previously covered with pavers and used sparingly for events as weather allowed—needed to be capitalized upon. Fast-forward five years, and in January the museum unveiled its completely renovated $6.2 million “fourth floor,” collectively known as the Fred W. Smith Penthouse. It includes the 4,800 square foot Nightingale Sky Room, complete with banquet kitchen and floor-to-ceiling retractable window walls looking toward that view of the mountains, and the 4,200 square foot Stacie Mathewson Sky Plaza, an outdoor patio surrounding the Sky Room. It will open to the public in March.

“It was really important that the Sky Room reflected the innovative character of the museum and its programs and exhibitions,” Walker says. “We wanted to further the idea that the museum is Northern Nevada’s public square. This is a place where we expect to host weddings, anniversary parties, proms, conferences, film programs and concerts.”

To design and build the addition, museum leadership turned to Sparks-based Clark/Sullivan Construction and Phoenix architect Will Bruder, who erected the museum’s current building in 2003.

Bruder took his idea for the rooftop pavilion from the historic Mapes Hotel in downtown Reno, an Art Deco–style building with a sky room of its own that played host to Frank Sinatra and Sammy Davis, Jr., among others. The building was demolished in 2000.

“It was the anti-casino that we know in Reno, where you have this sensory deprivation and don’t know what time of day it is,” says Bruder. He says that “stuck in my mind” once he knew the museum wanted to pursue the project.

Early on, Bruder says, he recognized the design priority for the rooftop venue.

“We knew the key was the horizon to the southwest,” Bruder says. To that end, he had a portion of his original design torn down—large black parapets that blocked the view to the west from the rooftop. Opened up, he designed a flowing, steel mesh lacework (he likens it to a “beautiful woman’s dress”) to function as a railing; the solution expanded the view while still providing wind resistance. 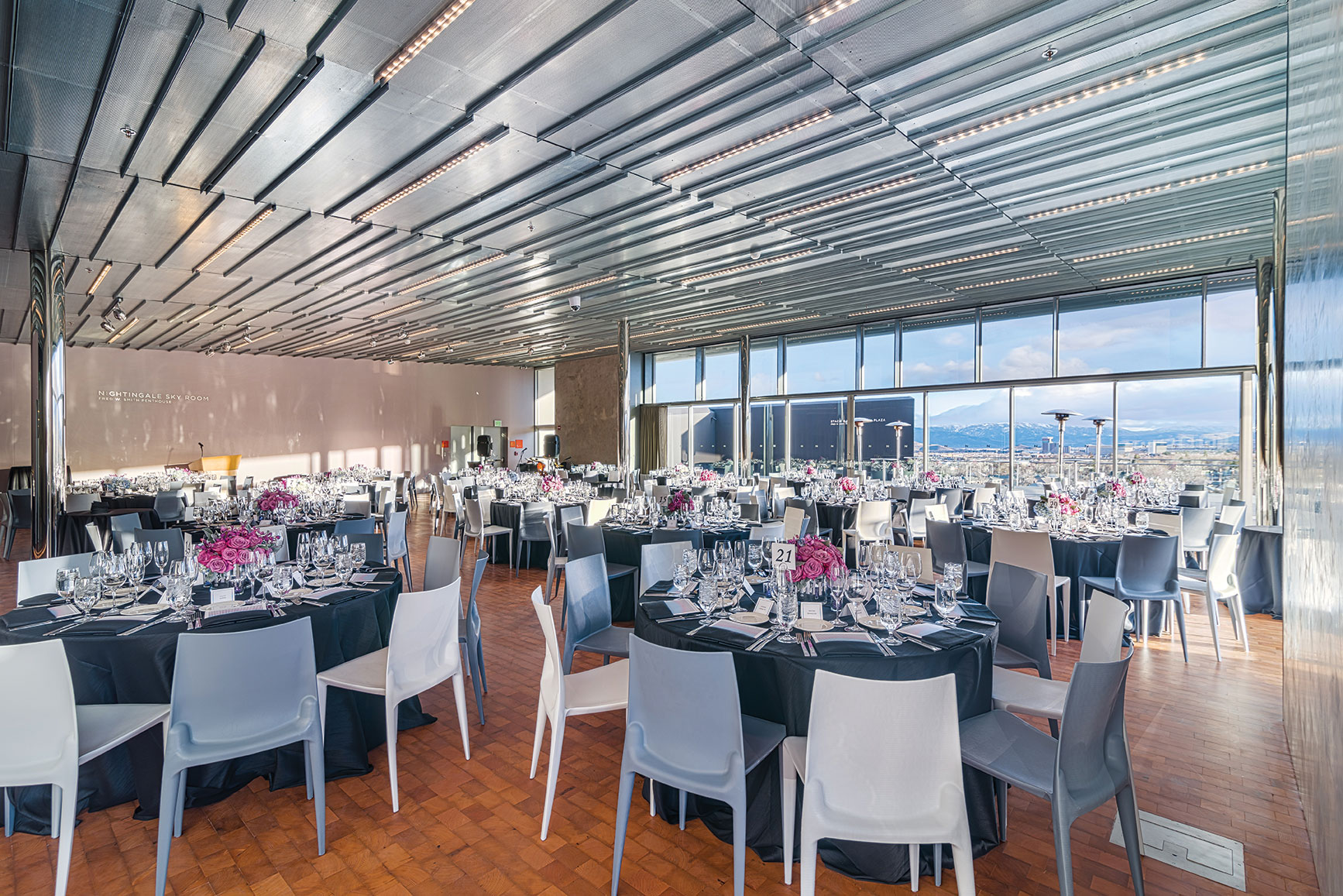 Built for special events such as weddings, concerts and museum-sponsored happenings, the Nightingale Sky
Room and adjacent deck seat about 500 attendees and features food served from an attached banquet
kitchen, photo by Chris Holloman

Bruder again placed paramount importance on the view when designing the Sky Room’s enclosed space, minding the mountains as he created the upsloping roof.

Nisha Hallert, NMA director of special events and sales and the point-person for event planning in the Sky Room, appreciates the effect.

“I just love when you walk out of the elevators and you look south and west it doesn’t even feel like an indoor space,” she says.

Interior touches include a cubical patterned floor, “great for dancing,” Walker says, made out of wooden end cuts, and an indoor lighting system that shifts colors depending on the event and mood. The slide-away walls open to a deck covered in pavers, and between the two spaces some 500 people can congregate. An acoustic engineer was brought in to consult on the Sky Room’s design for concerts, and the finished product earned a seal of approval from Joel Revzen, the artistic director and conductor of Lake Tahoe SummerFest. Mark Estee, the Reno chef who has started such area restaurants as Moody’s and Burger Me! in Truckee and Campo in Reno, is the contracted caterer for the Sky Room and was on hand in the generous kitchen in January prior to an opening party for museum staff.

Practically, the Sky Room opens a massive new channel of revenue for the museum. Some 50 events were already booked the day of the staff party, Hallert says. Event rentals are projected to increase the museum’s special event revenues by 300 percent in year one, Walker says, noting the extra income will ease pressure on fundraising.

The Sky Room also increases Reno’s event venue options. “We wanted to truly offer an alternative for this community to the ballrooms,” Walker says. “I know there are people who want a more elevated, or inspired place to hold their events.”