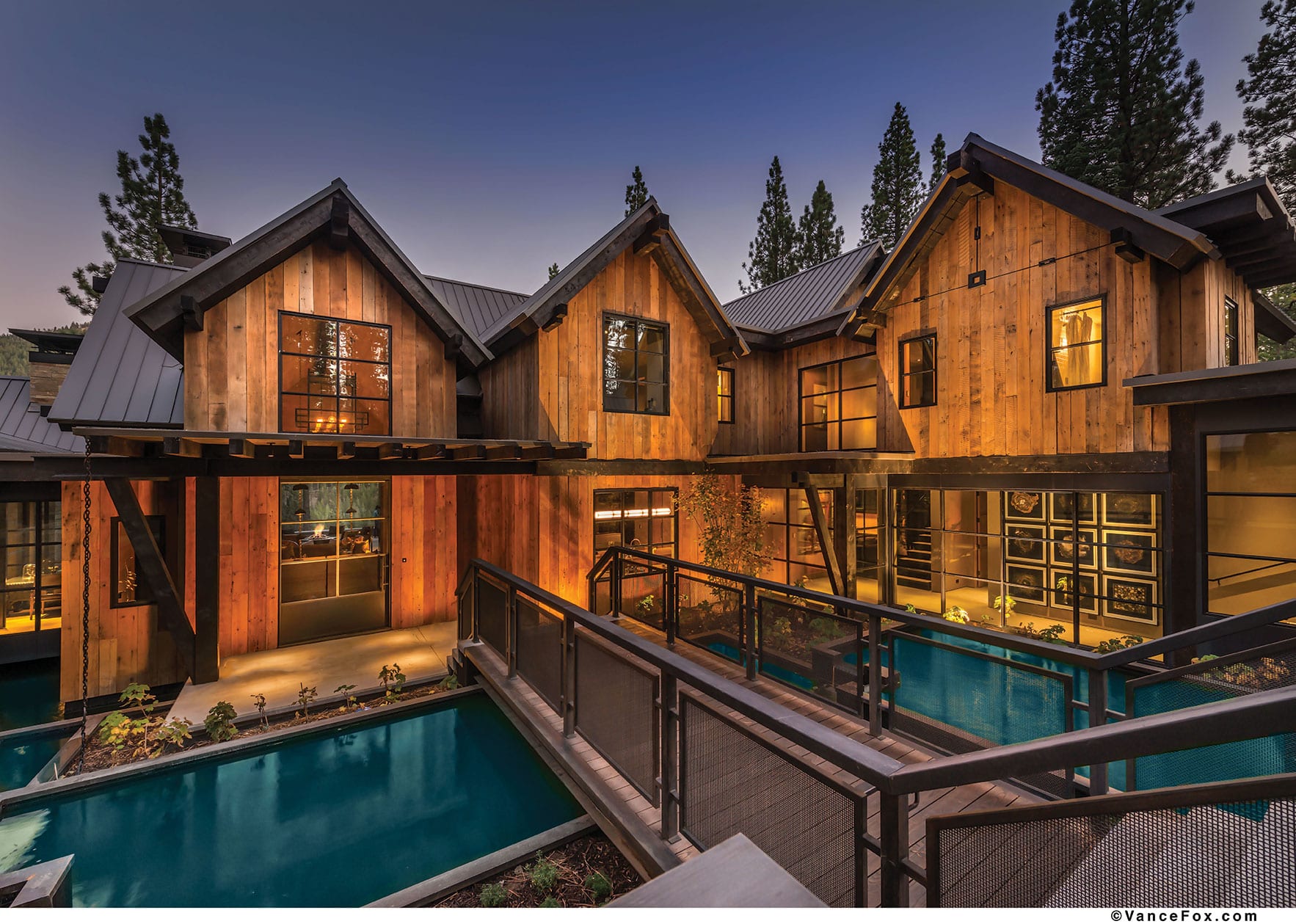 Oftentimes, a great home is the result of its team—the architect, builder and interior designer—collaborating from the beginning, a process that allows the contractors to share ideas, work together and move forward to create the best possible home. It’s how many successful homes work—but not all of them.

For Matt and Vy Hyman’s home near the Martis Camp Lodge and overlooking the golf course’s 18th green, the process wasn’t quite as serendipitous. After purchasing the lot in 2012, the Hymans identified Scott Gillespie, principal of Truckee’s SANDBOX Studio, and Mark Tanner, of the eponymous Truckee construction company, as the initial members of their team. 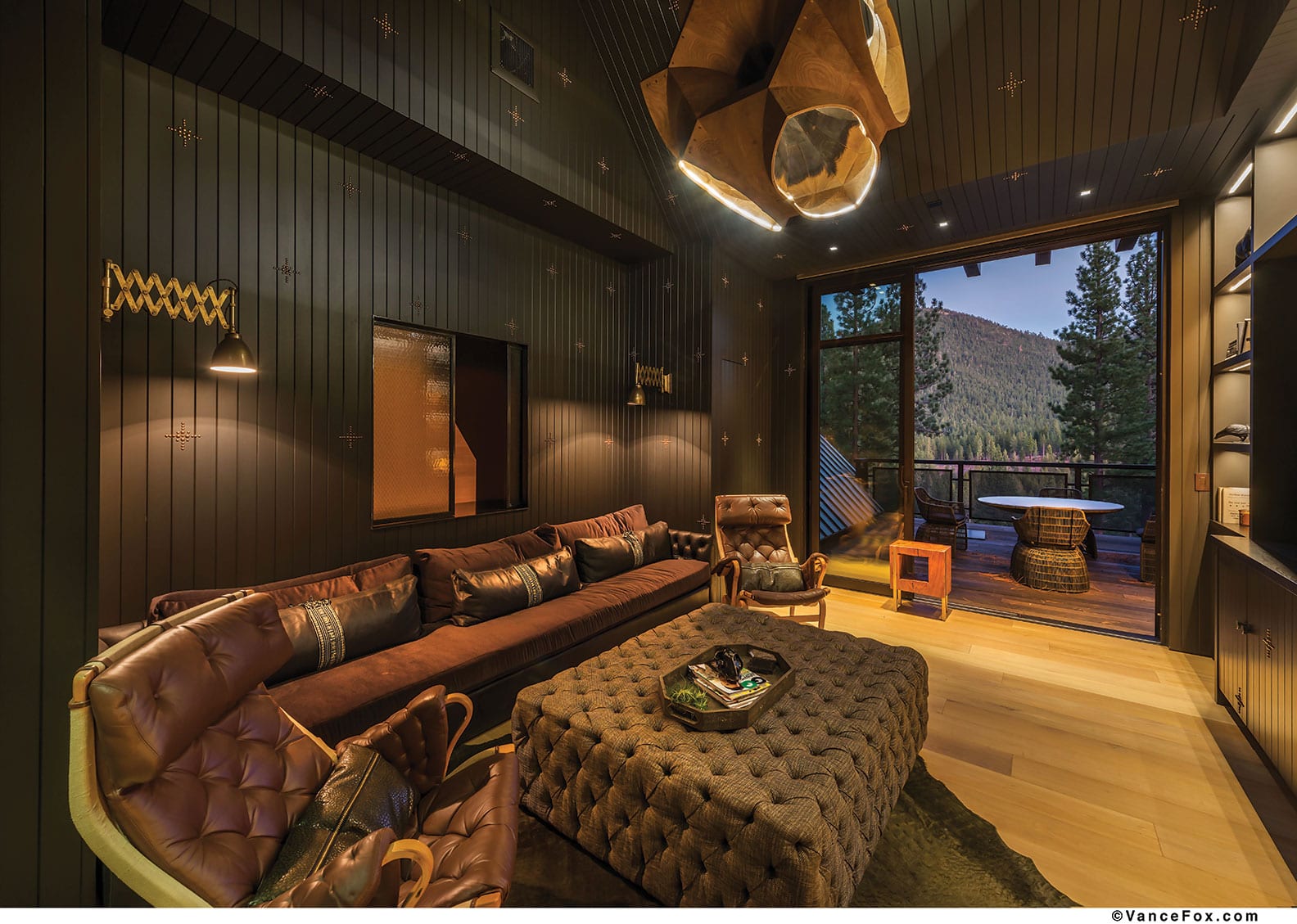 “Vy and I wanted the design to be somewhat timeless,” says Matt. “We did our best to stay away from trendy design ideas and stay true to the longevity of the home for future generations.”

Matt knew that Gillespie and Tanner had worked together in the past (including on his identical twin brother Zach’s Martis Camp home), and it was important to him to have contractors who trusted each other and got along. But the interior designer the Hymans had their heart set on, Erin Martin, out of Napa Valley was busy with other projects and not immediately available.

Still, the project commenced. Gillespie designed a fairly traditional eight-bedroom, 7,781-square-foot home, large enough for the couple’s four young children as well as their extensive extended family. The design included public spaces in the center of the home and private wings on either side; one for the family, another for guests. An organic-inspired water feature flowed from the front of the entryway, under a bridge and behind the home, and a guesthouse nearby was finished earlier to give the family a place to live while the main house was under construction. 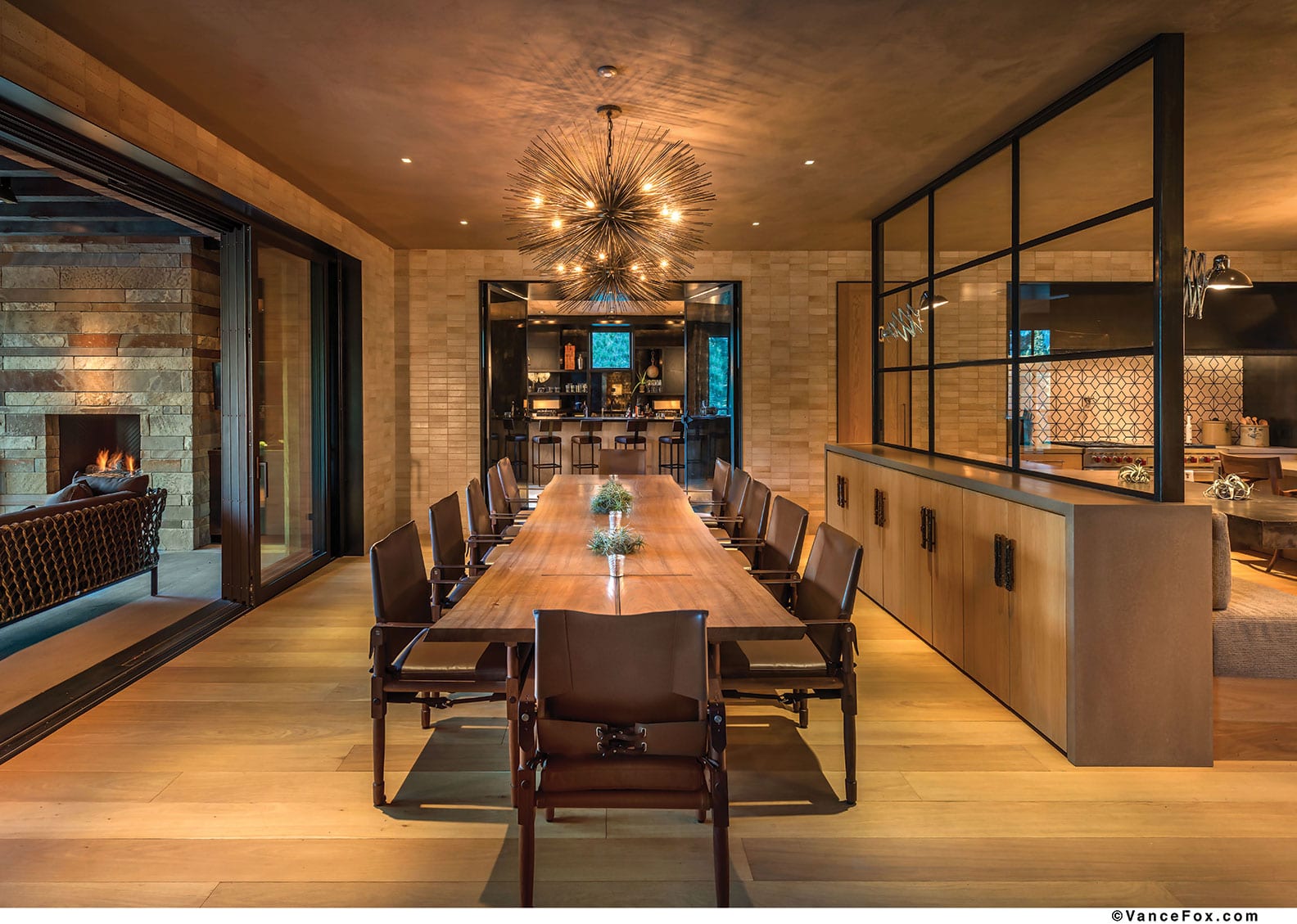 The home was in the framing stages when Martin’s schedule opened up and allowed her to get involved. “Everyone wants to be in at the beginning of a project,” she says. “But the challenge of designing in any given situation brings out the creativity and sometimes an even better result.”

When Martin toured the home, her vision differed from the drawings, and as she jumped into the process it meant redesigning spaces and windows and tearing down walls. “There wasn’t a room that wasn’t changed structurally,” says Tanner. “A lot of it was inspiration by design, which made it really creative and unique, but also took money and time.”

“We left a significant percentage of the overall design to Erin Martin and the team she put in charge of our home,” says Matt. “Erin was not only instrumental for the design of the home but many of the architectural decisions along the way, coupled with Scott.”

While it may not have been serendipitous, the team agrees that it’s the details that make this home.

“Erin brought a unique flair to the project,” says Gillespie. 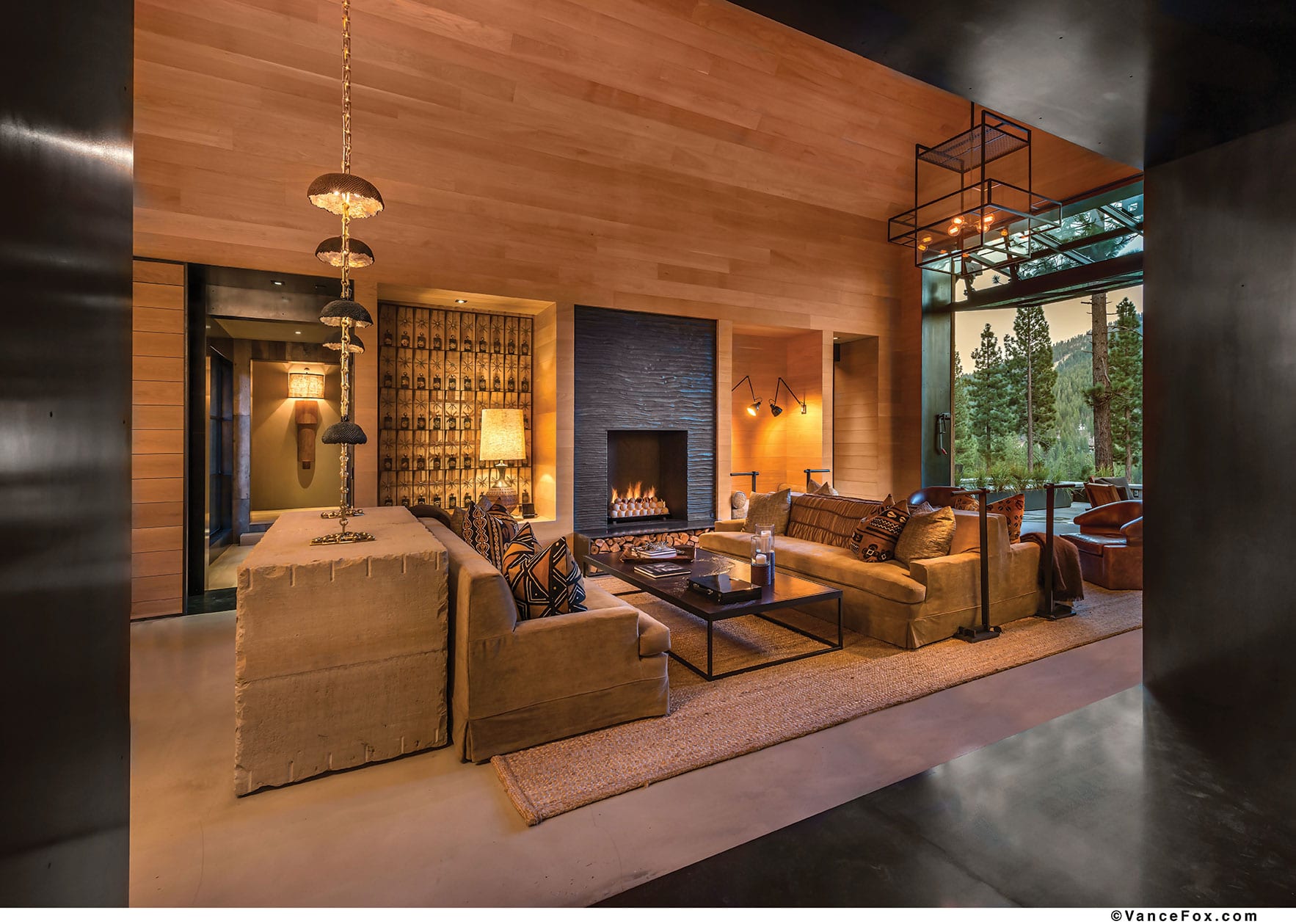 For example, guests enter through a massive custom steel pivot door into the great room, where Martin envisioned using two giant limestone blocks (to “suggest a strong foundation of home and family,” she says) as a sort of entry table that would also set off the seating area. The blocks are dramatic and solid, but at 3,200 pounds each, they required tearing up the home’s original wood frame floors and replacing them with concrete to support their bulk; the blocks each had to be craned into place before the roof could go on.

“Erin paints with a broad brush,” says main field supervisor Stephen Reitter of Mark Tanner Construction, who describes the designer as a “brilliant mind” as he talks about the challenges of making architectural changes mid-build. “She would describe what she wanted and I’d come in and figure out a way to make it work.”

Above the blocks, custom bronze sunflower pendants hang on chains suspended from the ceiling. “I like the free-floating feeling of the lights over the grounded limestone,” Martin says.

Other touches decorate this space, to include a metal screen cut to fit a recessed wall alcove and sitting space, a torched steel fireplace by artisan Brian Kennedy, brushed European white oak wall paneling with reglet trim detailing and blind-cut doors—such as the one leading to a powder room with charred oak ceiling and whimsical wall art featuring a beaver holding an axe—that meld seamlessly into the wall paneling.

“Everything is really clean,” says Gillespie. “Even the closets are designed to disappear into the wall.” 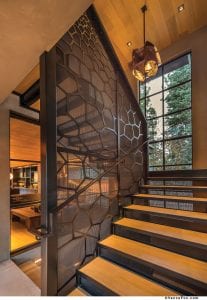 At the far end of the great room is the 14-foot-tall airplane-style hangar door the team calls the “Red Bull door,” as Matt had heard of something similar at Red Bull’s Southern California campus. The door opens at the top to an outdoor living area with a fire pit and views of the golf course.

The dining room and kitchen are set off from the great room by a steel portal that Reitter refers to as a “frame.” The portals repeat throughout the house, distinctly separating the rooms.

“We were really big on transitions between spaces,” says Gillespie. “You get these moments or experiences as you walk through.”

A long dining table that seats 12 is highlighted by a custom sunburst-style light fixture. Cabinetry and a glass partition separate the dining room from the raised breakfast nook and kitchen, where soda-blasted oak cabinets and concrete countertops and an island bar keep the area warm, bright and clean, as does the hidden walk-in pantry.

These areas had originally been open, but Martin envisioned more cube-like areas, adding a sense of symmetry and geometry, a realization that earned her praise from the other members of the team.

“She referenced a modernist aesthetic, and melded that with the Tahoe mountain architecture,” says Gillespie.

Off the dining room, the steel portals—plus antique bronze doors—transition to the bar and media room. Leather-clad walls are custom decorated with brass tack designs. A long bar, backed with antique bronze mirrors, holds an array of liquors. Guests can play air hockey or the vintage Pac-Man machine, or snuggle up on the comfy couch to watch a movie or game. Near the couch, a glass wall shows the “honeycomb” stairwell that leads to the guest wing; motorized screens can be lowered for privacy and darkness.

Back in the great room, another portal transitions to a hallway and office—fronted with glass doors—which create a literal bridge over the water feature and connect the private and public wings of the home.

The water feature was originally designed to be an organic piece that flowed from the home’s entryway, but Martin pictured a more geometric design. “It went through about four or five revisions,” says Tanner. “It evolved as things progressed.”

Now, cube-like pools, which reference the symmetry in the home, spill down under the bridge, ending outside of the cozy master suite and are on display via over-framed windows that are concealed by motorized shades.

The room features cathedral ceilings and built-in nightstands, as well as a gas-burning fireplace, also by Kennedy, that is as much artwork as it is functional. 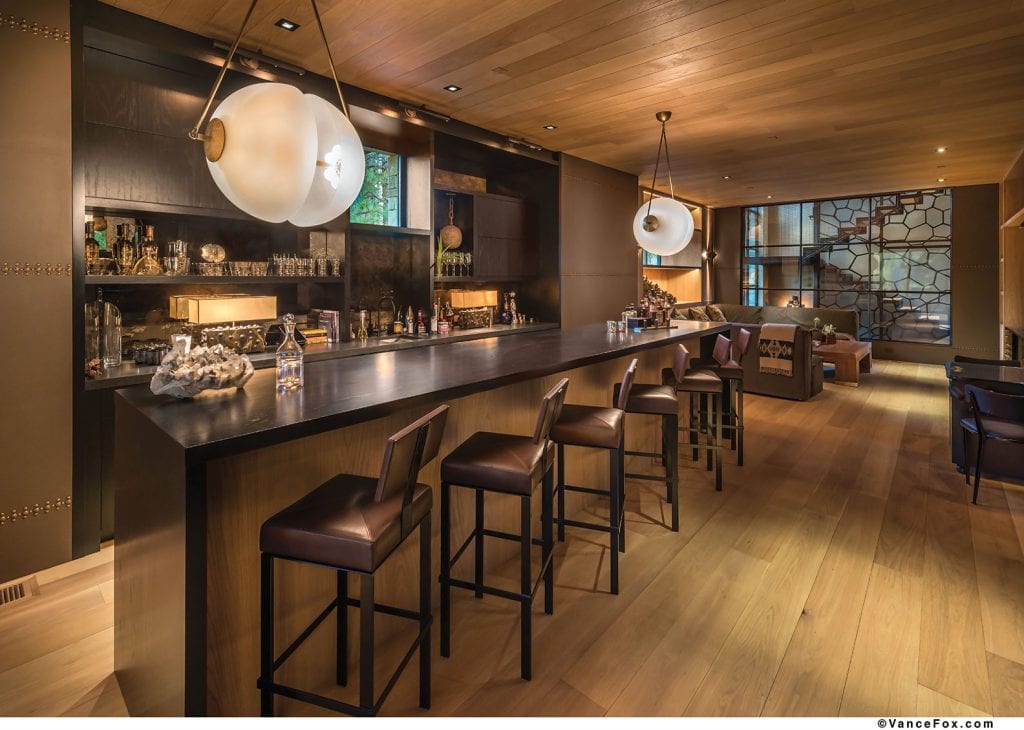 “We are lucky to have many artisans we have worked with repeatedly over many years,” says Martin, listing Kennedy as well as Mick Handley, who fabricated the lighting, and Michael McDermott, who created the great room’s sunflower pendants. “We have a second language with them now, which allows us to create some beautiful things.”

In the bathroom, both blind-cut doors and pocket doors are used to conceal areas like the walk-in closet or storage space while keeping the overall look minimalistic and clean. The shower is made of waterproof plaster and concrete. These materials, like the white oak and steel, recur throughout the house, creating a soothing repetition of materials.

A hallway from the master leads to the kids’ rooms. The bunkroom exudes a camp feel, with neutral colors and badges stenciled on the walls as well as whimsical animal heads. The bathroom is highlighted by a concrete tub, while blue ombre tiles cover even the ceiling. “The concrete tub was a challenge,” says Tanner. “We couldn’t frame the walls until the tub was in.”

An additional bedroom also reflects the same camp theme, while a kids’ play area includes built-in benches and bookshelves, plus fun touches like a stuffed animal rump that hangs over the door connecting it to the rest of the house.

The private wing of the house is accessed via the kitchen, where concrete floors lead to a mudroom with metal mesh lockers, laundry room and guest bedroom, as well as the mostly free-floating three-story stairwell with a unique honeycomb rail design, created by OlsonWorks, out of Verdi, Nevada.

Upstairs are additional guest suites and a poker lounge, which Matt says is his favorite room in the house. “It has a very cozy, dark, handsome design element to the room,” he says. Both Matt and his twin, Zach, are poker players, and both have played in Vegas’ World Series of Poker. Antique mirrors decorate the walls, while hand-applied beading creates star patterns. A deck, complete with an outdoor fireplace, features big views to Northstar’s mountains. An adjoining massage room is currently being converted to enlarge the poker room.

The upstairs hallway includes built-in shelving and storage created by Mark Tanner Construction. Integral pulls on the cabinetry keep the space clean and uncluttered, as does the reglet trim detailing.

Nearby, the 1,200-square-foot guesthouse matches the main house on its exterior materials—reclaimed white oak siding, steel beams and a minimal linear stone pattern—but the interior is distinctly contemporary versus the more transitional style of the main home. The palette features blacks and grays and unique touches such as the stairwell wood that “waterfalls” upward, the couches that were built onsite, the plate steel shower pan specially designed to be nonslip and water-resistant, and an enormous light fixture that Reitter says reminds him of a “sea urchin” in one of the three bedrooms.

The guesthouse was finished in 2014, and the Hymans resided there for a year while building continued on the main house. After almost two years in construction, the house was completed in July 2015.

The Hymans’ home may not demonstrate the serendipity that happens when a team begins a project together on page one, but it does demonstrate that great things happen when you assemble great minds—at any point in the process.

“Scott from SANDBOX was such a stand-up guy,” says Matt, who adds hiring Gillespie was an easy decision. “Tanner and his entire team not only delivered the home of our dreams but to this day offer bar none the best service we could have ever hoped for.” He also gives kudos to Martin, whom he trusted to make not only design choices, but architectural decisions as well.

“When you are not held back, wonderful things happen and anything is possible,” Martin says.

For this team, the project was a challenge, but the efforts were well worth the exertions.

“It pushed us beyond certain aspects that we’d ever done before,” says Tanner.

Gillespie agrees. “Rome wasn’t built in a day,” he says. “We’re all—including the clients—incredibly proud of the results.”

“We love the house,” says Matt. “What is very special is we love Martis Camp equally—so it is a match made in heaven for our family.”