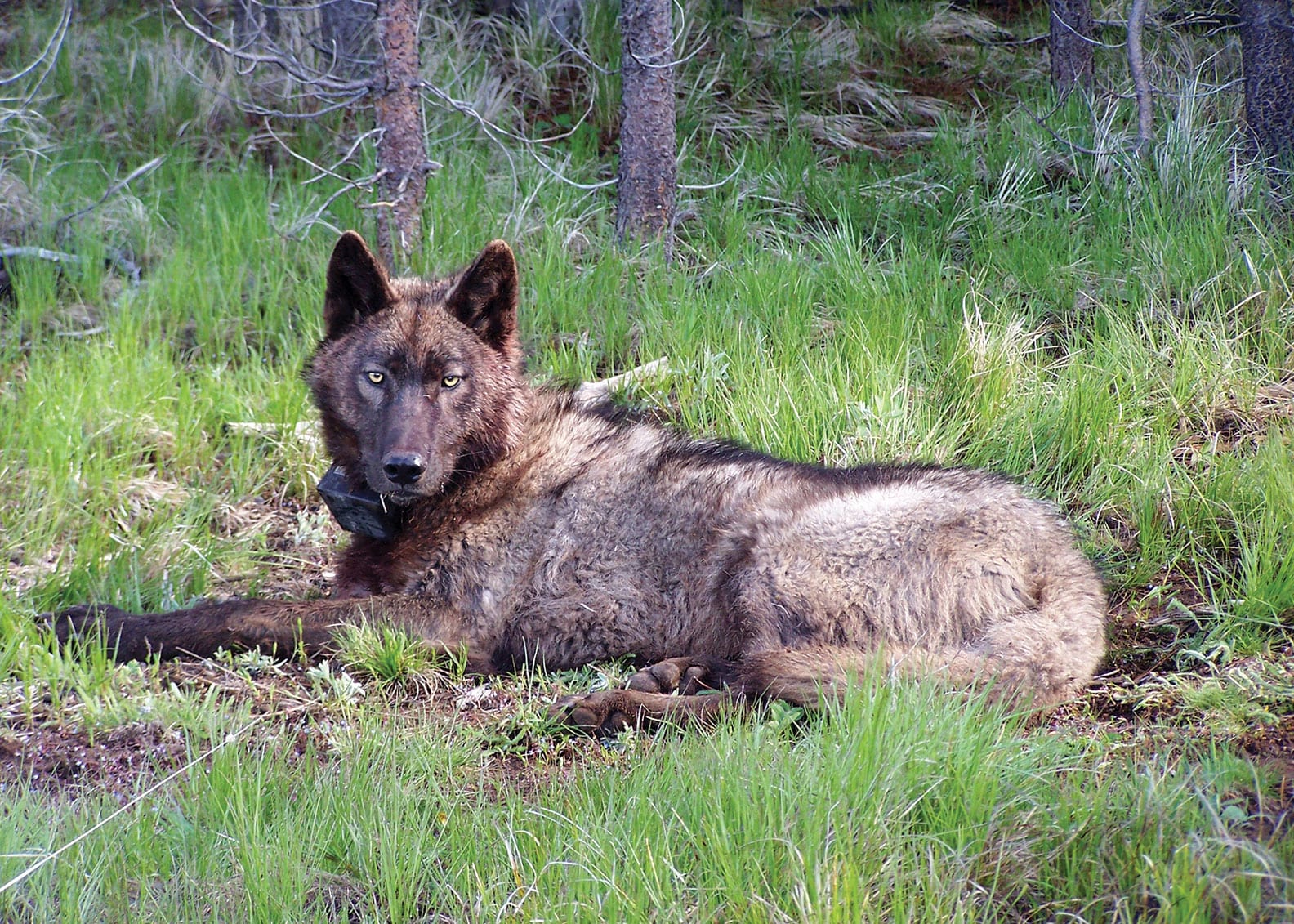 OR25, a yearling male in the Imnaha Pack, after being radio-collared on May 20, 2014, photo courtesy Oregon Department of Fish and Wildlife

04 May On the Comeback Trail

Wolves—a symbol of wilderness and an icon of the American West—likely wandered the woods of Tahoe and the surrounding Sierra Nevada a century ago.

Though estimates put the country’s total wolf population at more than two million when European settlers first arrived in the New World, little is known about historic populations in California.

“It’s very hard to estimate the historic population,” says Amaroq Weiss, the West Coast wolf organizer for the Center for Biological Diversity, a biologist and former attorney who has worked in wolf conservation for 20 years. “But we do have evidence that they were widely distributed.”

Records from Spanish colonists, settlers, fur traders, hunters and surveyors pieced together from the 1700s and 1800s anecdotally place wolves from Del Norte County in the north to San Diego in the south, across the Central Valley and throughout the Sierra.

Nearly 80 Native American languages in California had a word for wolf, distinguishing them from foxes, dogs and coyotes, and often weaving them into their lore. Among those were the Paiutes near Tahoe.

But not much more is known about wolves’ history in Tahoe or California. The last known wolf was killed in 1924 in Lassen County, where the Sierra ends and the Cascades begin.

Wolves’ historic distribution has become a more relevant question since 2011, when a radio-collared wolf known as OR7 wandered across the Oregon-California border. OR7’s presence set off a series of events culminating in the release of the Conservation Plan for Gray Wolves in California at the end of 2016 by the California Department of Fish and Wildlife (CDFW).

The dearth of historic information and the vast changes to the California landscape since 1924 make it hard enough to project what wolves will do in the Golden State. But wolves also have a way of constantly confounding expectation in keeping with their mythological status.

After humans wiped out wolves across most of the country by the mid-twentieth century, only about 600 remained in the western Great Lakes region. Reintroduction began in Yellowstone in the 1990s, and wolves have shown up in the most unexpected places ever since, says Weiss.

“Wolves can surprise you. They can make their way unseen across the landscape,” Weiss says. “One wolf made it from Wyoming to the Grand Canyon without being seen until it was shot. Another one made it from the Great Lakes all the way to Southern Missouri before it was seen and shot.”

Unconfirmed sightings placed wolves in California’s Tulare County in 2012 and El Dorado County in Tahoe’s Desolation Wilderness (allegedly with a radio collar) in 2004. The animal has also reportedly been seen in Yosemite and elsewhere around the state, Weiss says. 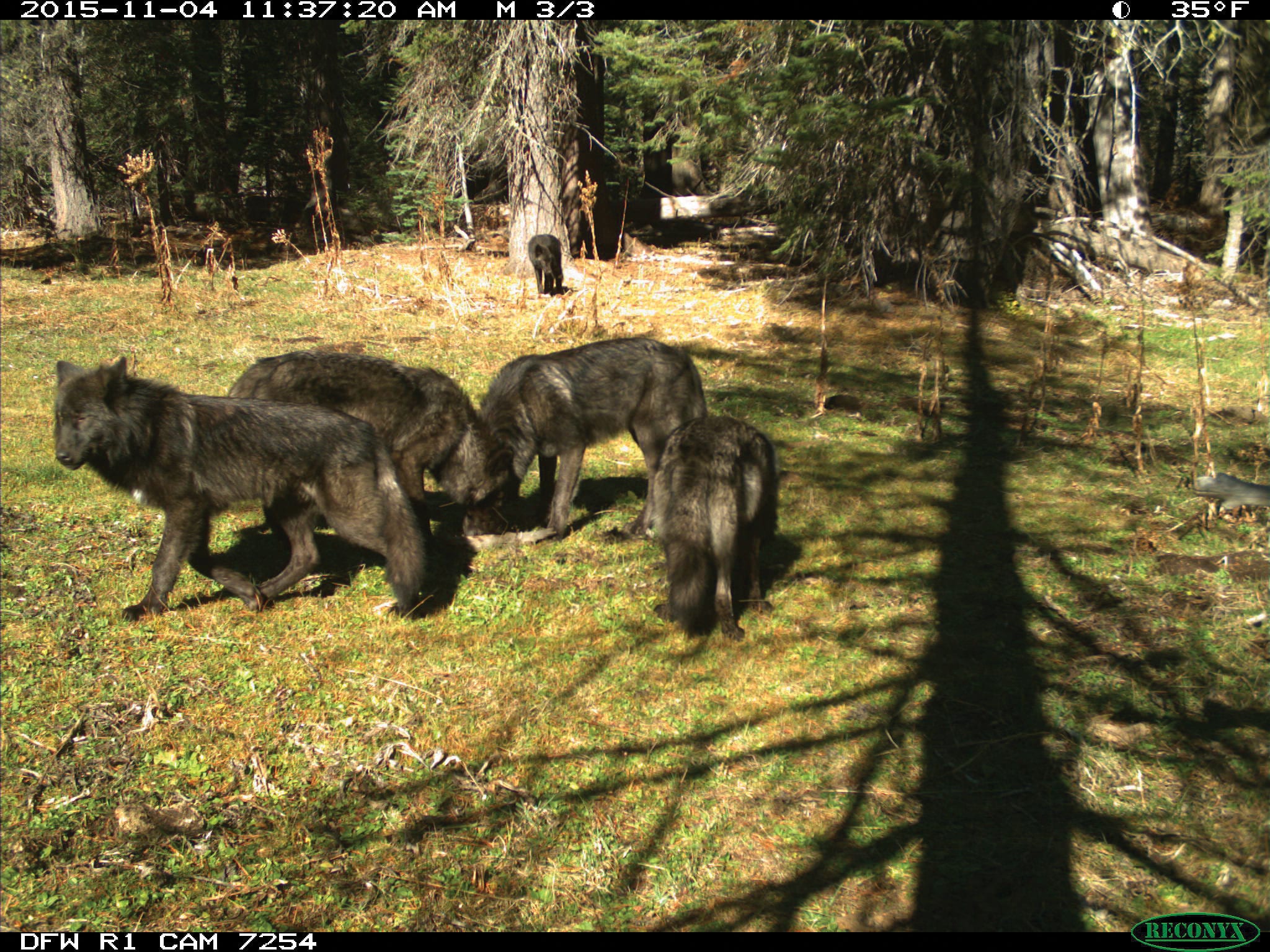 Members of the Shasta Pack, taken with a trail camera, courtesy California Department of Fish and Wildlife

Retired Southern California Edison employee Bob Waltz recounts stories of predecessors who spent winters working at Florence Lake—a high-elevation reservoir in the central Sierra—hearing wolves howling in the backcountry prior to the 1960s.

“I used to hear from the old-timers about a group of wolves that would come down the Sierra some winters,” Waltz says. “They were distinctly different from the coyotes, which they would feed.” 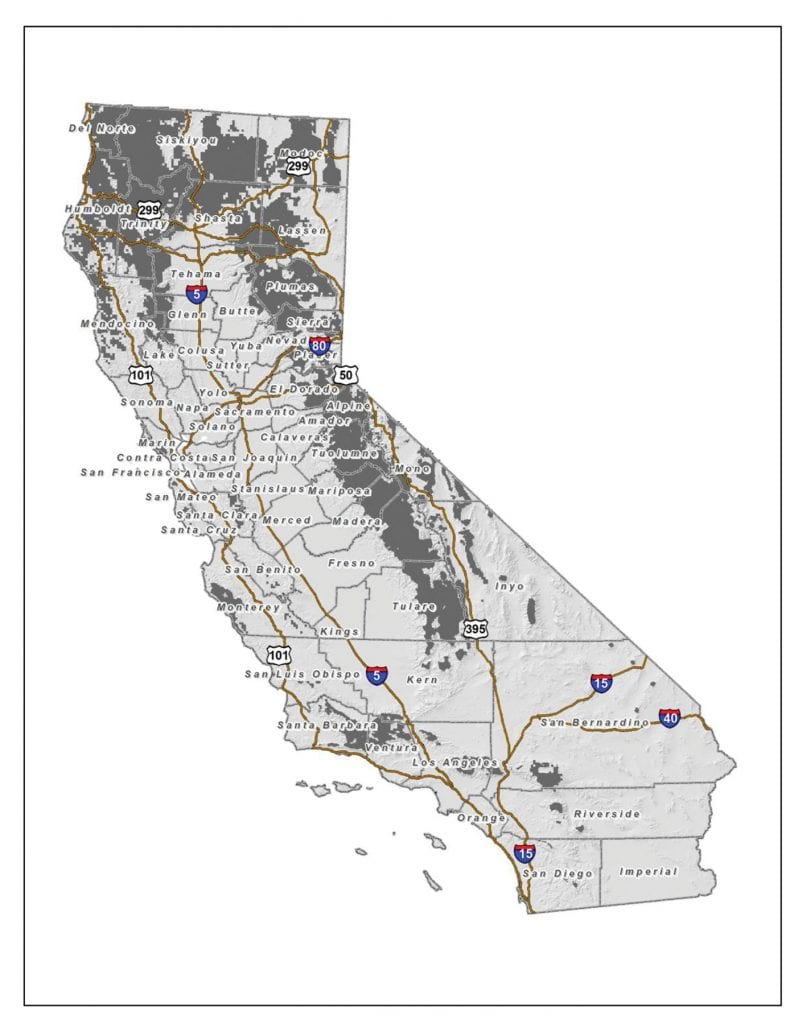 In 2012, shortly after OR7 first came to California, Doug Smith, the man who led the wolf restoration project in Yellowstone in the 1990s, spoke at the University of Nevada, Reno, about his work. When asked by an audience member if he thought a permanent population might establish in California, he answered “no.”

Only a few years later, it appears that Smith was wrong.

Today, California has a mating pair consisting of a male descendant of OR7 and a female of unknown origin in Lassen County, members of the recently established Shasta Pack in Siskiyou County and surrounding areas, and other lone wolves that cross between Oregon and California—like OR25, who showed up in 2016, Kovacs says.

“In only 20 years since they were reintroduced to Idaho and Montana, we’ve got breeding pairs in California. They’ve managed to skirt the landscape from Yellowstone out to the Pacific Coast,” Kovacs says.

Kovacs recounts a conversation with the wolf coordinator for the U.S. Fish and Wildlife Service, Ed Bangs, who told her wolves wouldn’t show up in California for 20 years. That was in 2010, one year before OR7.

“Even the experts didn’t anticipate how quickly they could get here,” she says.

Before OR7 showed up, some biologists wondered what size wolf population the Modoc Plateau in Northern California and Southern Oregon could sustain. They came to an estimate of 490 wolves, Weiss says. Interestingly, in the 2016 Wolf Conservation Plan, officials arrived at similar numbers for Northern California. 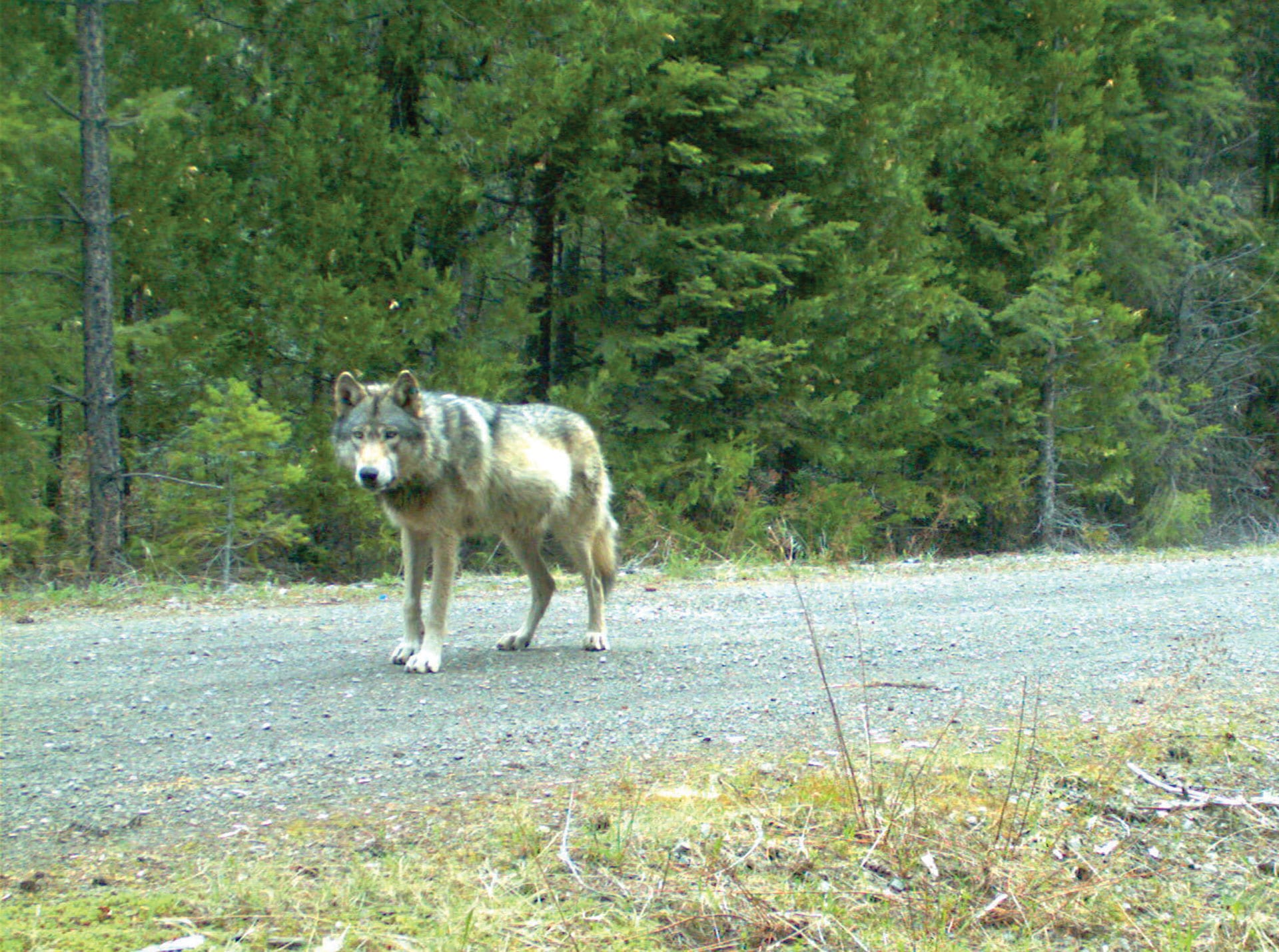 Remote camera photo of OR7 captured in May 2014 in eastern Jackson County, Oregon, on USFS land, photos courtesy Oregon Department of Fish and Wildlife

Prey availability, appropriate habitat and human population are three major factors in determining where wolves are and aren’t likely to appear in the state, Kovacs says.

“Wolves need large expanses with lots of prey,” she says, adding that, unlike black bears and coyotes, wolves avoid humans and civilization.

Those wide expanses with the correct prey—principally deer and elk—start in northeastern California where wolves are today, but also include northwestern California and the Sierra Nevada, along with isolated pockets in Central and Southern California.

“You have disjointed pieces broken up by roads and urban areas, but will that impede the movement of wolves? I would submit it doesn’t,” Kovacs says. “OR7 has put thousands of miles under his feet, crossing roads, crossing highways—he went through the outskirts of the city of Redding.”

Once a few breeding pairs establish in California and start having litters, typical growth rate is 30 percent a year for the first few years—though California might be slower, Weiss says.

When it comes to the relatively densely populated Tahoe area, with impediments like Interstate 80, Truckee and the numerous lakeside communities, Weiss says it’s anybody’s guess. But she isn’t betting against wolves.

“I wouldn’t be surprised if we saw wolves in the Central Sierra in 10 years,” Weiss says. “But they won’t go anywhere near people. You’d be lucky to ever see one.”

Conflicts on the Range

In November, a calf was apparently killed and eaten by the Shasta Pack in Siskiyou County, bringing the conflict that has played out in Montana, Wyoming, Idaho and elsewhere to California.

But beyond that, Karin Vardaman, director of wolf recovery with the California Wolf Center, says her organization is taking a proactive approach, focusing their work on California ranchers.

“We wanted to do on-the-ground work with ranchers as wolves come back—our goal was to develop real relationships with the ranching community,” Vardaman says. “While wolves don’t impact the cattle industry as a whole, it’s a huge loss for a small rancher—more emotional than economic.”

The California Wolf Center is developing new practices designed to not only protect livestock from wolves, but to also be more environmentally friendly while helping the health and value of the herd, Vardaman says, using low-stress stockmanship and husbandry.

“We’ve found that by spending time with [ranchers], listening to them, respecting their opinions and offering viable solutions, wolves become a nonissue, and some ranchers are actually excited about them,” she says. “There are still those who are going to fight it, but we’re focusing on the things we can do. You can’t change the fact that wolves are going to come.” 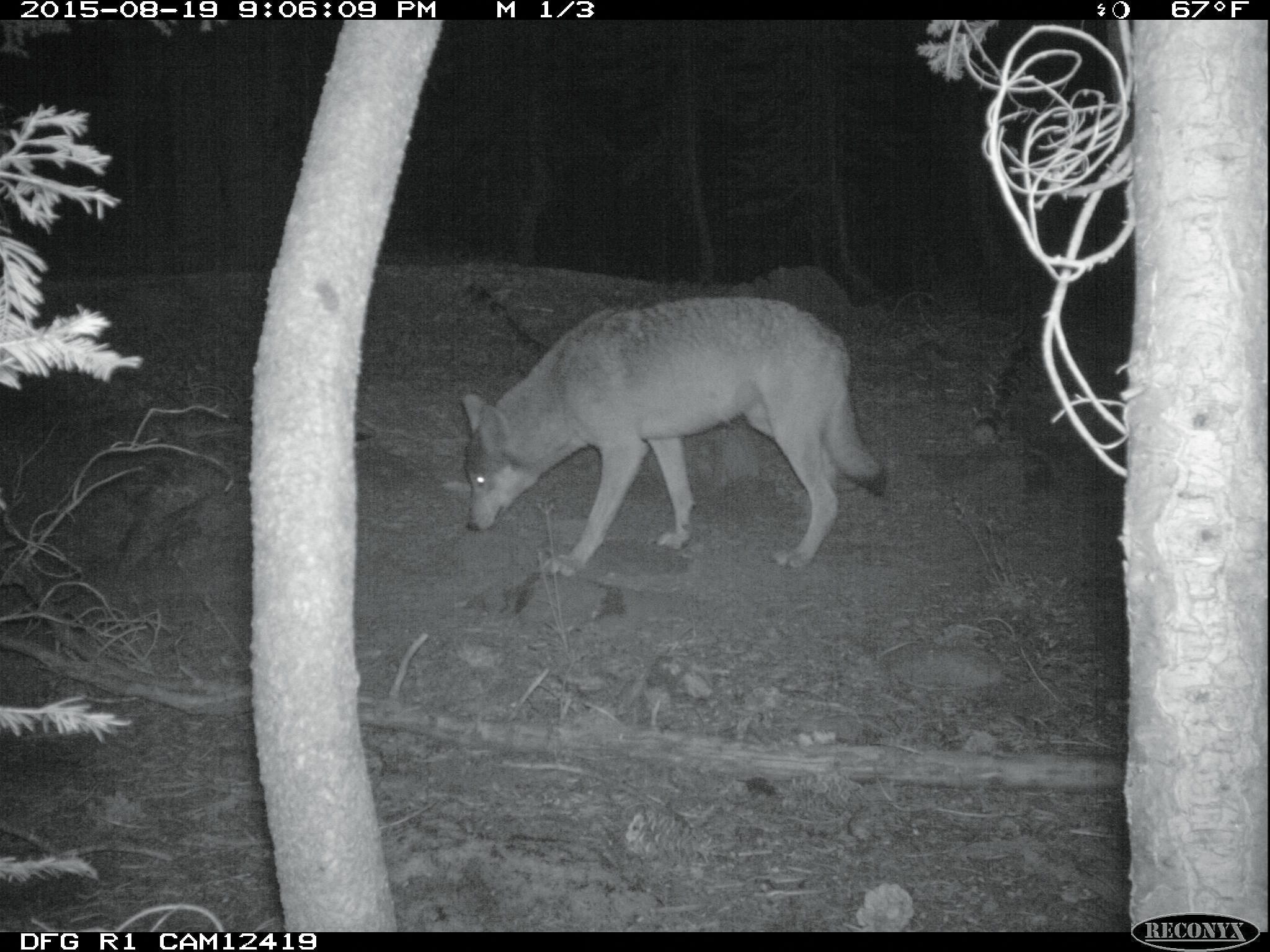 Potential evidence of at least one other wild wolf in California, in Lassen County, photo courtesy California Department of Fish and Wildlife

The California Department of Fish and Wildlife also sought to address the concerns of ranchers—along with hunters, conservationists and environmentalists—when it set out to create the conservation plan, published January 2016, creating a Stakeholder Working Group representing 22 organizations, Kovacs says.

“It was a laborious effort—we had 40-plus meetings in total,” Kovacs says. “We tried to learn from the experiences of other states.”

Things weren’t easy in the beginning, but slowly improved as lines of communications opened up.

“We had some hard-liners in the membership, but there were some willing to reach across the table to have more focused discussions,” Kovacs says. “Did we make everybody happy? No. But we made a plan that understood the concerns, did our homework on the science out there, and we believe formed an objective direction.”

The time has come to implement parts of the plan—studies on prey species and habitat, potentially collaring one or more wolves for more accurate tracking—and review the status of wolves and the plan every five years, in accordance with the California Endangered Species Act.

The agency is also advertising for a wolf specialist position based in Redding, whose full mission is wolf conservation in the state. As of today, the position has three years of funding. 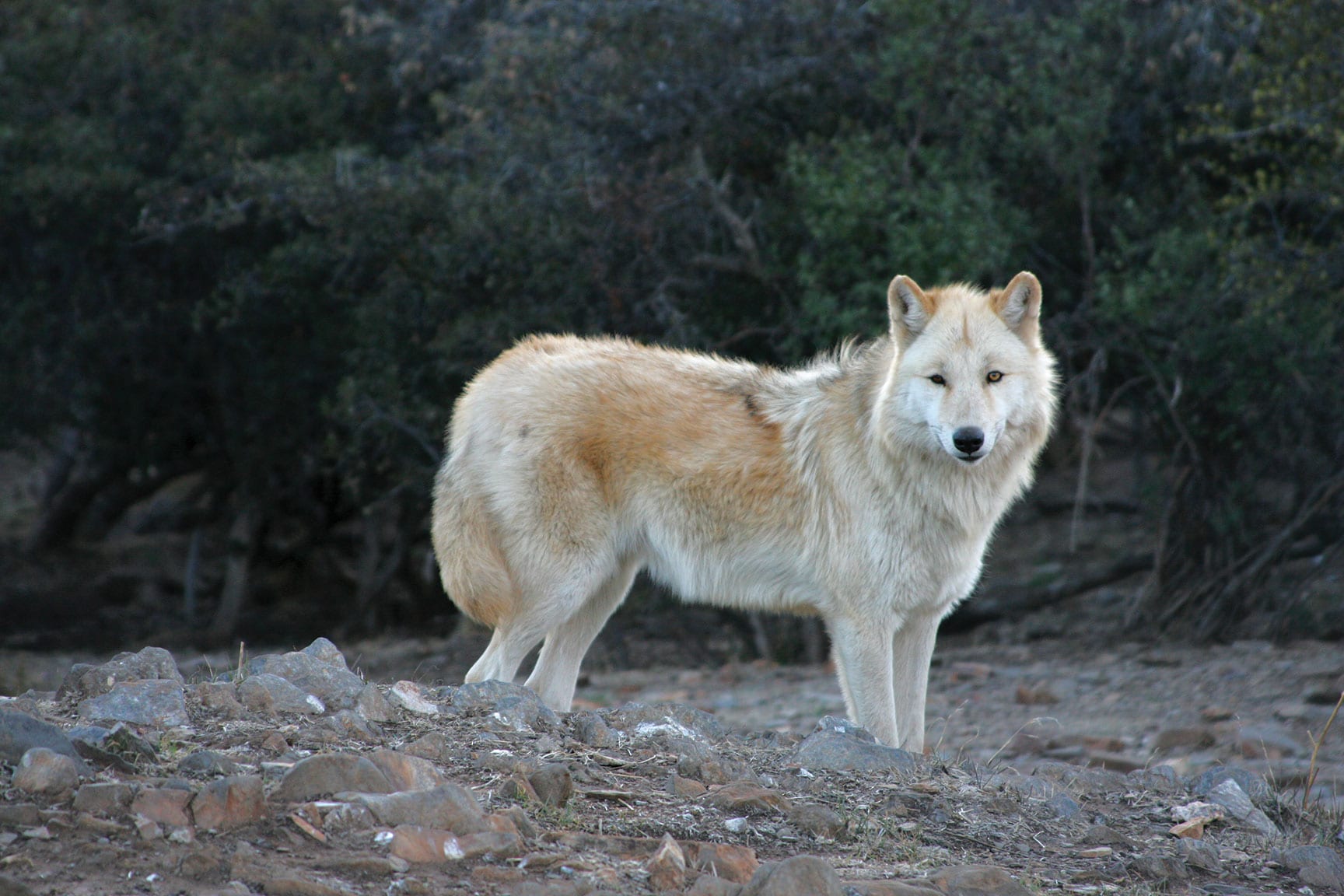 “We expect with the new administration, the Republican House and Senate, to see the federal delisting of wolves and the possible gutting of the Endangered Species Act,” Weiss says. “That will leave it to the states, most of which don’t have the environmental backbone to withstand the demands of citizens to kill wolves.”

California’s Endangered Species Act does have the backbone, Kovacs says, but without the federal law, it could lose some key funding.

While the possible loss of the Federal Endangered Species Act could be damaging to numerous species, Kovacs thinks wolves stand a better chance.

“Wolves don’t have critical habitat like spotted owls,” she says. “In 20 years we’ve gone from reintroduction in Yellowstone to breeding pairs in California—can you think of another species with such a huge recovery? I can’t think of one. Before, there was poisoning, indiscriminant hunting—we don’t have that today.”

Greyson Howard is a Truckee-based writer. Learn more at www.greysonhowardmedia.com.