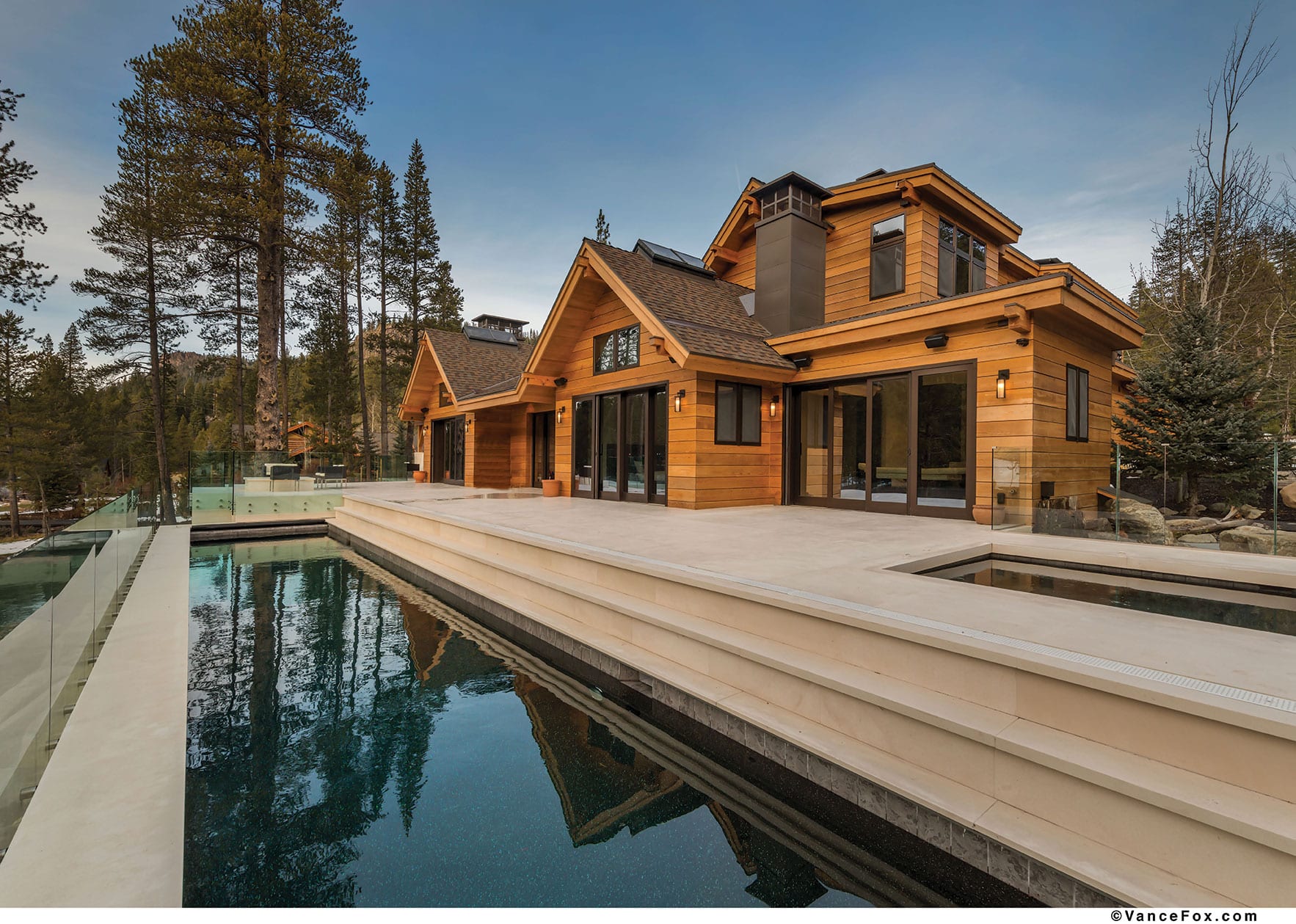 This was no run-of-the-mill remodel, despite the original intent.

In 2014, Truckee’s SANDBOX Studio and Mark Tanner Construction were hired to open and brighten the interior space of a home along the Truckee River near Squaw Valley. From that initial concept, however, the project snowballed into a complex, nearly complete overhaul—and a home unlike anything else in the Tahoe area. “It didn’t start like that, which was funny. We were going to move the kitchen and refinish the floors,” says remodel project manager Travis Spencer with Mark Tanner Construction. “Then it turned into a full gut with a whole bunch of renewable energy, geothermal, solar panels, solar hot water… if you can think of it, it has it.”

The wife and husband, who moved to the United States from the Philippines and France, respectively, have modern taste. As such, they ultimately decided on a contemporary design. It needed to be minimalistic and bright, with straight lines, notes of contrast between surfaces and open views to the Truckee River—a sophisticated upgrade from the home’s previously dark, view-obstructing interior. The project’s team, which expanded to include Marcio Decker of Truckee’s Aspen Leaf Interiors, used the smoothest drywall available. Dark, reddish-toned beams and cabinets—milled all from a single mahogany tree—were used throughout the interior, adding contrast to its expanses of white. Traditional baseboards, window trims and door casings were scrapped in exchange for trim-less alternatives, which were achieved with reglet reveals to create shadow lines of delineation.

“The smooth walls with the trim-less stuff, to me, stands out the most, especially up here,” Spencer says. “Not many people pursue it, mainly because it’s Tahoe and everybody wants the Tahoe rustic home. It’s very contemporary and modern, and also very hard to execute.” Additional contemporary touches on the interior include trim-less glass railings, a floating staircase and floating soffits, a German glass kitchen, and large-format Portuguese limestone flooring that flows from inside to out. Multiple skylights add to the brightness of the home, while two intricately designed, European-made light fixtures, each with hundreds of LED bulbs, hang over the living room and dining room, enhancing the modern ambiance.

“They have presence and are very see-through, so they don’t make a big block,” Decker says of the fixtures. “In this house we don’t have a lot of light fixtures hanging from every opportunity, so we needed some pieces that were very powerful. And even if they’re not on, they’re very sculptural in a sense. They have an edge.”

The master wing of the home includes a sauna built from aspen wood and a custom massage room that opens to an expansive back patio—and the soothing sound of the Truckee River beyond.

The living room and dining room also open to the patio, which houses a fire pit, barbecue and outdoor dining area, as well as a built-in spa and heated pool. The pool measures 55 feet long by 8 feet wide and is situated two steps below the rest of the patio, as to not obstruct the view of the river from inside the home.

In an unusual request for the Tahoe area, the owners wanted the pool capable of being heated year-round—a feat achieved by a 15-ton geothermal system integrated with solar hot water.

“We’ve got 13 250-foot geothermal wells going straight down, and each well has a double loop in it that goes back into a mechanical vault with a heat pump. So the geothermal assists in the radiant heating of the house, and it’s the primary source of heat for the pool,” says Spencer, adding that the pool is designed to remain above 55 degrees, and has the potential to reach 82 degrees.

The geothermal wells were installed under a flattened plot of land in front of the home, which will soon become a tennis court. “We haven’t done a whole lot of pools before, or geothermal or tennis courts,” says SANDBOX's Scott Gillespie. “It was a pretty complex job on a number of levels.”

Among the more complex aspects of the home is the mechanical vault located under the patio. All the plumbing, heating and air conditioning components, plus the pool and spa equipment, are housed in the vault, which, due to its proximity to the Truckee River, is flood rated.

“It can have water up to four feet on the outside door and the water won’t go into the vault, nor would anything come out,” Spencer says. “All in all, the vault is a beast.”

In addition to Gillespie and Decker, Spencer says Mick Nicklin with Truckee’s Linchpin Structural Engineering was instrumental to the project. So, too, was Adam Mills with Mills Tile, Jeremy Espana with Mark Tanner Construction, and Joel Alonzo with Aspen Leaf Interiors.

“I really enjoyed the project and the process,” Spencer says. “It’s what I enjoy doing, especially in a remodel.”