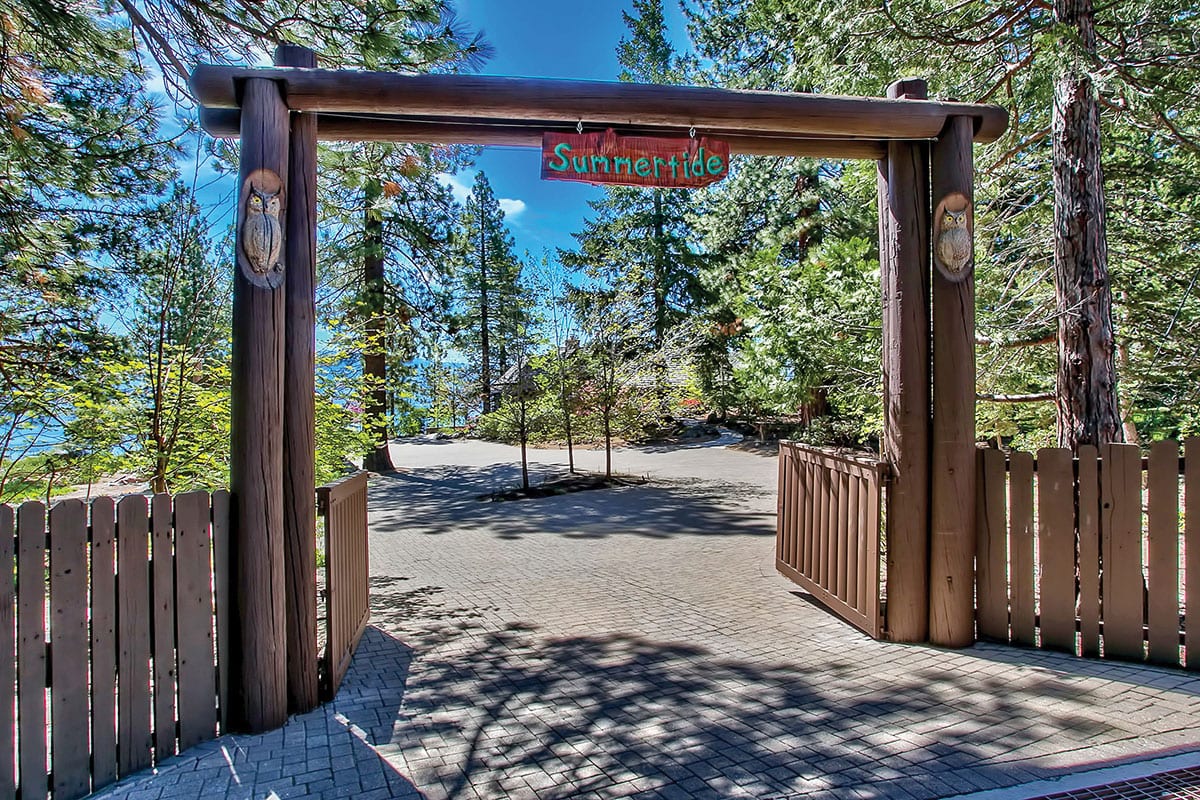 If houses could talk, the stories they would tell.

The legends that have grown up around Summertide, a five-and-a-half-acre property that abuts the North Shore of Lake Tahoe, are profuse. And like many of the tales of tycoons from this nation’s gilded yesteryear, many of the narrative wisps that have been passed down through generations of storytellers are more akin with the vapors of rumor than the solid ground of fact.

Summertide was once owned by Howard Hughes, the eccentric magnate and polymath who built unimaginable wealth out of his family’s tool manufacturing business, made blockbuster movies from the 1920s through ’40s, revolutionized the aeronautical industry and helped Richard Nixon ascend to the presidency, among other notable achievements. 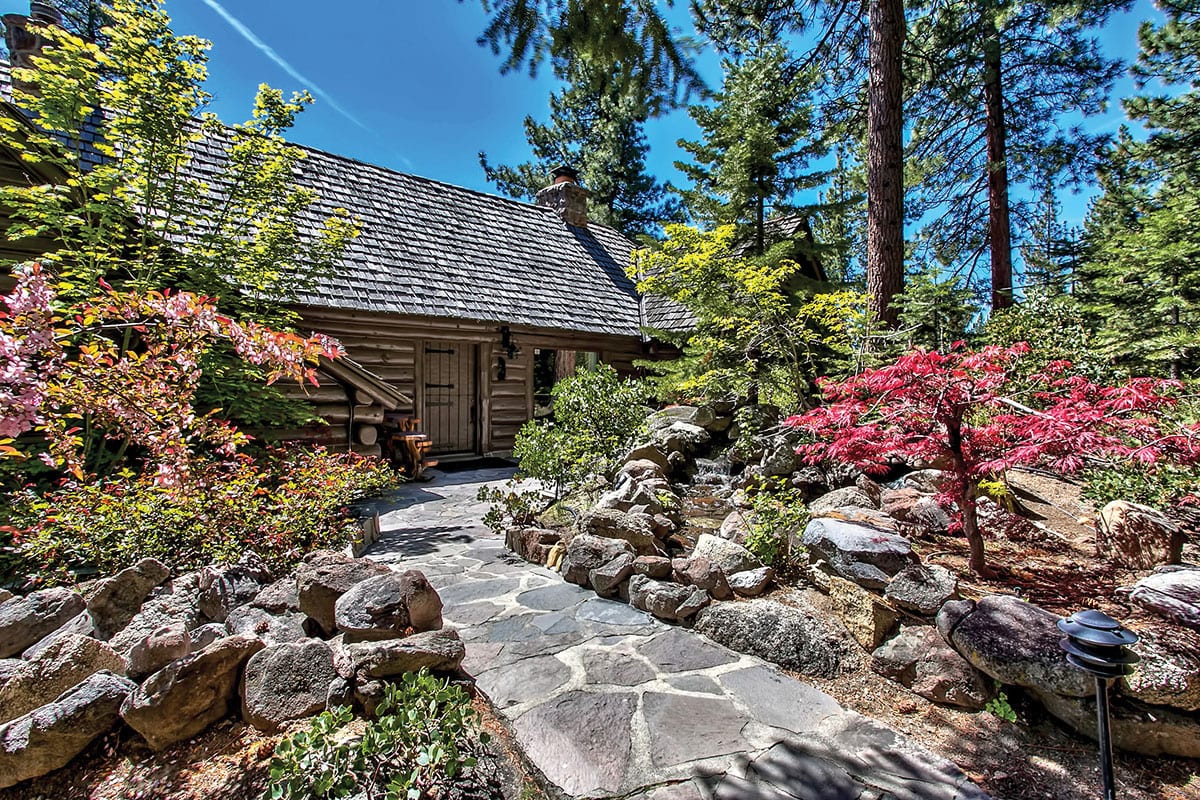 Summertide went on the market recently, and the stories about the rustic cabin built from ponderosa pine harvested in the Tahoe Basin abound.

Hughes threw lavish parties there, where all the who’s who of Hollywood rubbed elbows with gangsters and titans of industries, according to one article penned by the British publication The Daily Mail.

According to other sources, Hughes would leave a red light on in the front of the house, indicating to young ladies that his wife was away and he was ready to play.

The lurid lifestyles of the rich and famous during Hollywood’s Golden Age make for good stories indeed. But a close reading of Hughes’ life story, particularly the 1950s chapter, strongly suggests that most of these stories are outright fabrications.

In fact, it is quite possible that Hughes never set foot at Summertide. He likely never saw the sturdy wooden gate constructed of tough pine with the property’s name etched high in the air. Or the main house, with five bedrooms, four bathrooms and a kitchen (all of which are newly renovated), nestled neatly on a bluff that affords stunning views of Lake Tahoe below. Or the guesthouse, located down the hill closer to the shore, with its own immaculate views of The Lake and surrounding peaks. Or the private pier that juts out into the famously clear waters, all built in the Adirondack-style log cabin architectural ethos that has come to represent the old Tahoe style. 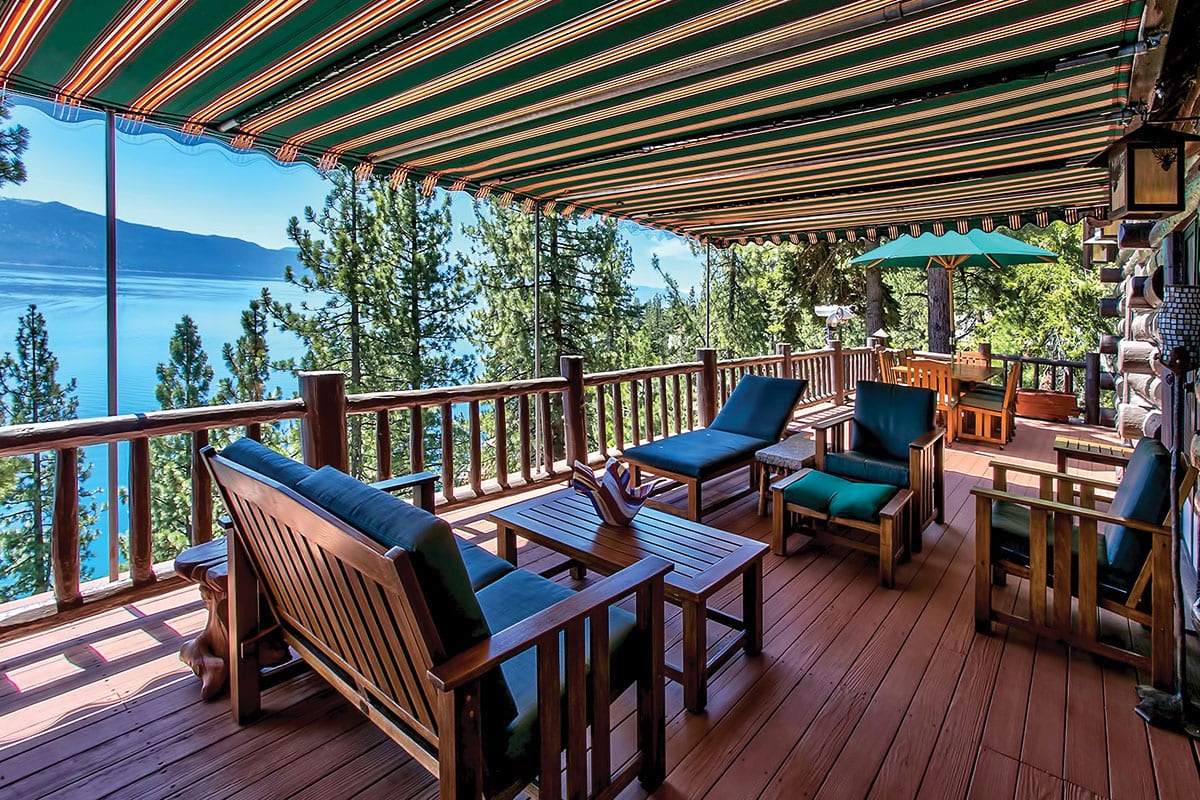 While most people would salivate at the opportunity to call such a magnificent piece of Tahoe home, Hughes was not most people. If there was one thing he did not care about by the time the 1950s rolled around, it was houses.

Hughes lived a highly reclusive lifestyle, mostly in hotels, and only deigned to buy a house near Beverly Hills after he married Hollywood starlet Jean Peters in 1957. He lived there for only a couple of years.

While it’s highly doubtful that Hughes ever graced Summertide with his presence, the house boasts its own luminous history apart from its tenuous association with the famed maverick.

The 2,518-square-foot main house was built in 1934 by Tasker Oddie, the 12th governor of Nevada and the state’s representative in the U.S. Senate from 1921 to 1933. Oddie was born in Brooklyn, N.Y., but after graduating law school he heeded Horace Greeley’s advice to “Go West, young man” and lit out for the vast stretches of opportunity on the western half of the continent.

He made his fortune in Tonopah, Nevada, where he hit a silver vein that would, along with the vein at the Comstock Lode, furnish Nevada with its moniker as the Silver State. Oddie, like most who live in Reno and the Carson Valley, developed a predilection for Lake Tahoe, and commissioned the construction of Summertide. 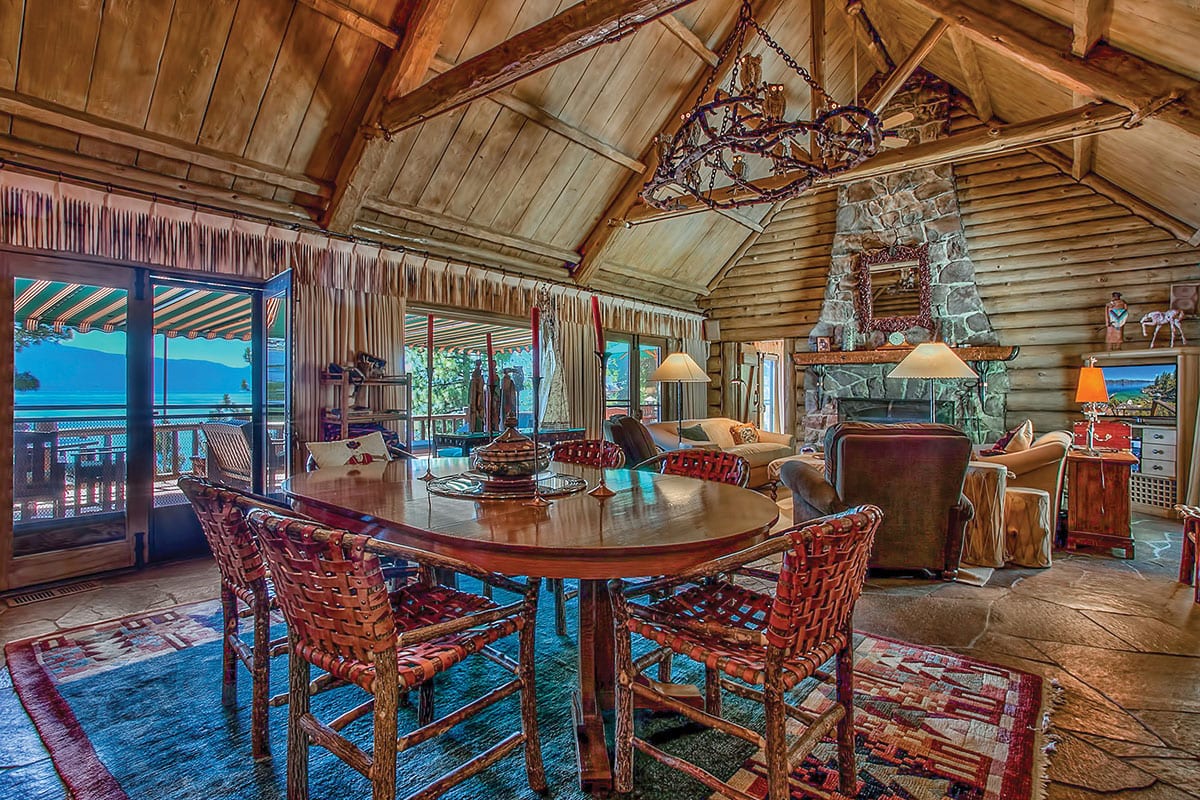 In 1951, the property was bought by Christian Arthur Wellesley, the 4th Earl Crowley of England.

Wellesley had immigrated to the United States from England in 1933. Soon after landing in the Reno area, he met Mary Elsie May, a granddaughter of one of the original Truckee Meadows homesteaders and ranchers.

Wellesley, whose notable ancestors included the Duke of Wellington, who defeated Napoleon at the Battle of Waterloo in 1815, married the farmer’s daughter within a year of landing stateside. He used his considerable inheritance to purchase a comfortable cattle ranch in the Washoe Valley.

During the Wellesleys’ long tenure in Northern Nevada, they became friendly with Oddie and his family and spent many a summer sojourned at Summertide—although it was not called that at the time, as that name was installed by a later owner.

The Wellesleys’ familiarity with the property meant they were well positioned to scoop it up when it came on the market in 1951, which was when several news outlets erroneously reported that Howard Hughes bought it.

Instead, the Wellesley family used the property extensively throughout the early 1950s before they moved to their summer home in Bel Air, California, in 1955 and onto Phoenix in the late ’50s.

The house did not languish from disuse, however. Mary Wellesley, ever the daughter of enterprising ranchers, did what many second-home owners in the Tahoe area do—she leased it out.

In 1962, she leased the house to none other than Frank Sinatra, the famed singer, Rat Pack member and owner of the Cal-Neva from 1960 until his license was revoked by the Nevada Gaming Control Board in 1963. It was widely believed, then and now, that Sinatra was merely a front for Sam Giancana, a Chicago mafioso, and other mobsters who couldn’t publicly own casinos.

In fact, Sinatra had his license revoked and was forced to sell because Giancana was spotted on the premises despite being banned by the control board from entering any casino. While Sinatra spent a lot of time at the Cal-Neva in the early ’60s, he was also known to repair to the more private environs afforded by Summertide.

According to various sources, Sinatra dated Marilyn Monroe for a spell during this time. Monroe may have stayed at Summertide while working on her last film, The Misfits, starring Monroe, Clark Gable and Montgomery Clift. The film was directed by the great John Huston and written by the famed playwright and Monroe’s former husband, Arthur Miller.

If Monroe did shack up with Sinatra at Summertide in the early ’60s, it was one of the last things she did, as she died of an overdose in 1962.

According to the Wellesleys’ son, Brian, Mary Wellesley was contacted by a man named Robert Maheu in 1970. Maheu was a businessman and fixer hired by Hughes to head his Nevada operations.

By 1970, Hughes was in a bad way. He’d sold his majority stock in his beloved Trans World Airlines in 1966 and his multiple injuries from accidents incurred as a test pilot in the 1930s and ’40s were wreaking havoc on his body and mind.

Hughes, who had long suffered from obsessive-compulsive disorder and various phobias, was dictating 100-word memos to his retinue of assistants about how to open a can of fruit. Hughes had come to Nevada four years earlier in 1966, by train and under the cover of night. 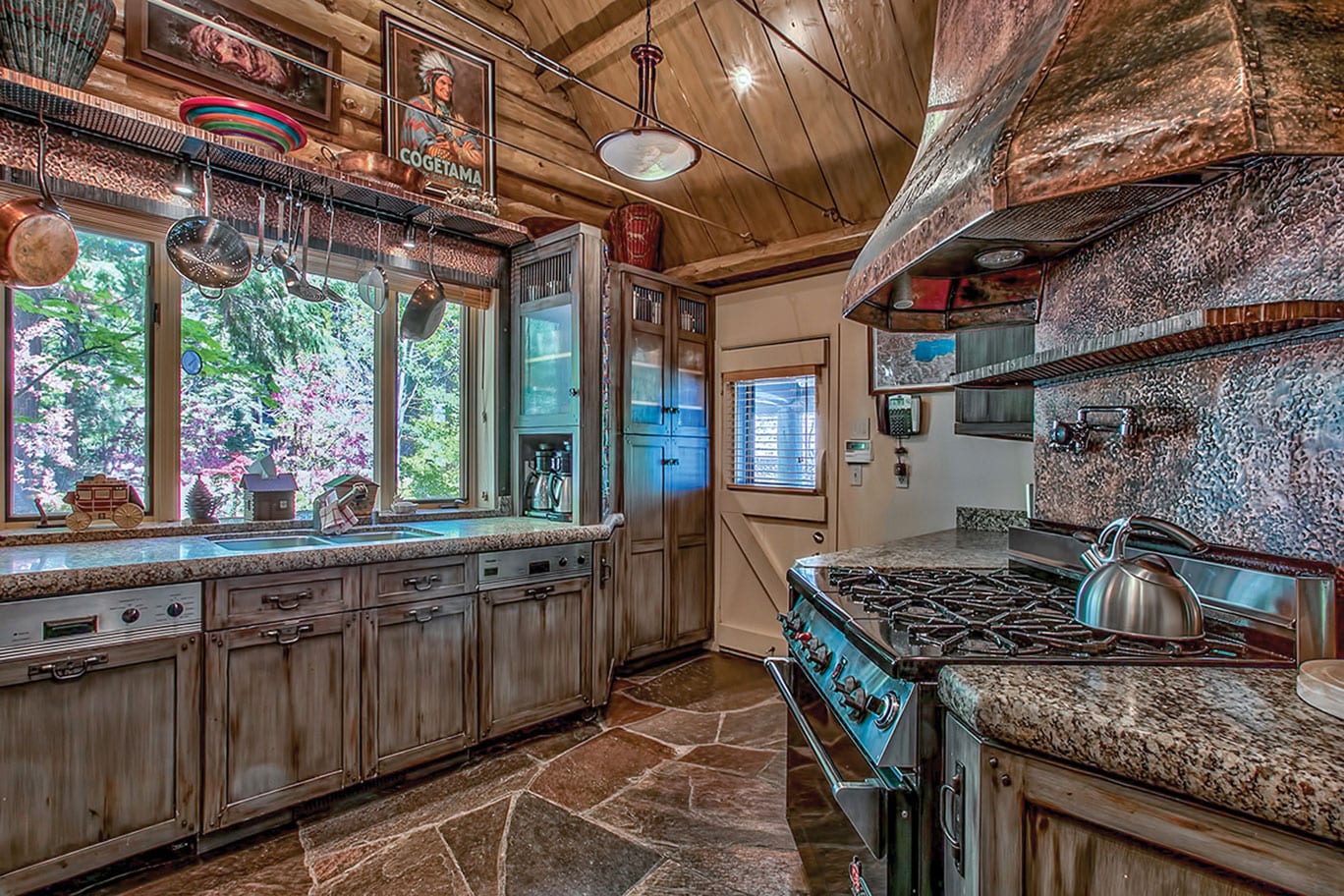 Reclusive to the point of eccentricity, Hughes moved into the top floor of the Desert Inn in Las Vegas on Thanksgiving Day 1966, bringing his usual coterie of trusted assistants. While the Las Vegas newspapers and politicians welcomed him, the owner of the casino, Moe Dalitz, wasn’t happy that the guest who occupied the best suite never emerged to gamble.

Dalitz attempted to evict the billionaire tycoon, but when he did, Hughes decided to buy the hotel, rightly guessing that several Nevada politicians would rather have him as a business partner than a collection of unsavory mafiosos who were known to resort to some rather lethal tactics should things tend against their wishes.

Hughes bought the Desert Inn largely so he wouldn’t have to leave, but afterward, he went on a casino buying spree. Operating from the eighth and ninth floor of the Desert Inn, he dispatched Maheu on errands that eventually resulted in Hughes’ purchase of the Castaways, the Landmark, the Frontier and the Sands.

Legend has it the Silver Slipper’s iconic neon sign was visible from Hughes’ penthouse and kept him up at night, so he bought the casino and had the sign removed.

Hughes also bought Harold’s Club in Reno in 1970, and it is believed the executives who worked for Hughes were interested in Summertide as a private retreat for themselves and their clients. They leased the residence for three years before buying it in 1973, according to Brian Wellesley. 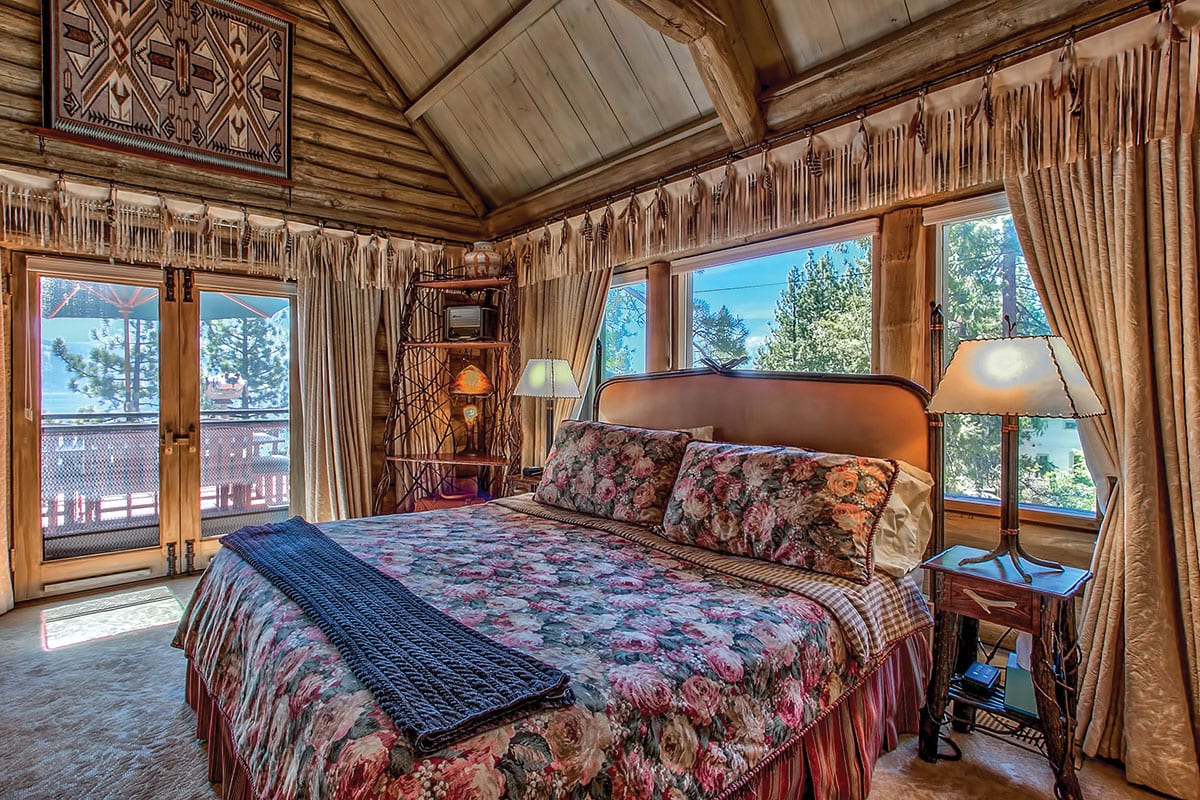 Again, given Hughes’ deteriorating mental and physical condition—he died in 1976 weighing only 90 pounds and had to be identified by his fingerprints—it is highly unlikely he ever stayed there. However, it’s rumored his wife, Jean Peters, stayed there in 1972 to establish residency long enough to get her divorce from Hughes that same year.

While Hughes likely never set foot in the house, it speaks to the enduring allure of the man’s mystique as an entrepreneur, filmmaker, aviator and reclusive eccentric that the house in Crystal Bay is still associated with him all these decades later, however tenuous the association.

Regardless of the Hughes connection, the house has hosted its fair share of memorable guests.

Bruce James, a former public printer for the U.S. federal government, bought Summertide in 1995 and has recently put it up for sale once again—for a cool $17.5 million.

The house is scheduled to go back on the market in the spring after being taken off for a brief winter spell, according to the listing agent, John Leles with Sierra Sotheby’s International Realty.

Brian Wellesley, who spent time in the summers of his youth at Summertide, says he hopes that whoever purchases the property will respect the history that has saturated its walls.

“It is hoped that it does not succumb to the destiny of so many beautiful old estates which once proudly hovered over the shores of Lake Tahoe, which were simply destroyed to make room for more modern facilities,” he says.

Much of the information about Summertide was provided by an article written by Brian Tim Wellesley based on his interviews, research and personal experience.